The avalanche danger remains CONSIDERABLE at the higher elevations above 2,000′ where very weak snow sits under a hard slab 1-3+’ thick. Because of this poor snowpack structure, human triggered large slab avalanches 1-3′ deep continue to be likely on steep slopes (> 35 degrees) and may pull back further than expected. Triggering an avalanche remotely, from a ridge or from below for example, is possible. Signs of instability such as collapsing/whoomphing may not be present until it’s too late.

The avalanche danger is MODERATE below 2,000′ where the moist snowpack is re-freezing and the greatest hazard is an avalanche from above running into this zone.

*Sticking to lower angle terrain is again the best strategy for a safe day in the backcountry.

The last two days have brought warm, sunny spring-like conditions to Turnagain Pass and today will be much the same. After several human triggered avalanches on Tuesday, there were no reported slides yesterday – however, very few people were out. Although the weather is inviting, the snowpack is not. A very poor structure exists currently and is one that will likely persist for the foreseeable future. The set-up is simple: a hard slab 1-3′ thick over weak faceted (sugary) snow on top of a hard bed surface. This is textbook for human triggered slab avalanches.

The slab on top of the weak layer is quite variable due to the strong winds during Monday’s storm. There are portions of terrain that have been scoured to the point of uncovering old tracks (anti-tracks) and areas where a slab thickens from 0 to 30″ over just 10′. These are extreme examples, but my point is – sussing out trigger points and how one triggers an avalanche today. Thin areas of the slab, roughly 1′ or less, are the most likely places for a person to trigger an avalanche. The thicker areas of the slab will take a group of people near each other, such as a large party congregated on a ridgeline, something we call large triggers. Large triggers also include snowmachines – yet our unprecedented lack of snow has kept motorized use closed.

Not only is sussing out trigger points a hard thing to do and a bit too much to gamble on right now, but another thing to consider is the potential lack of obvious signs of instability. Collapsing or whoomphing was widespread two days ago, but less so yesterday. Don’t let an absence of these signs lure you into thinking the snowpack is stable until it is too late. All you have to do is dig in a couple feet and you’ll see for yourself the weak faceted snow that is plaguing the mountains. 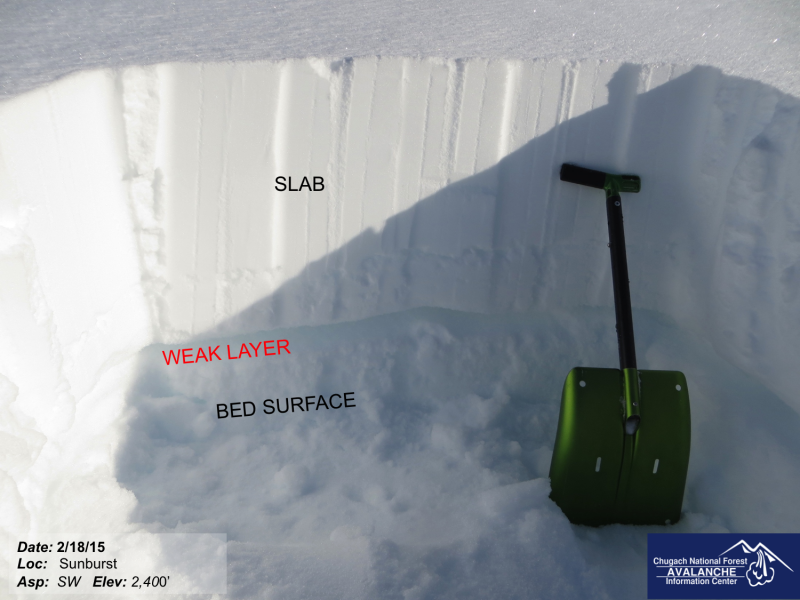 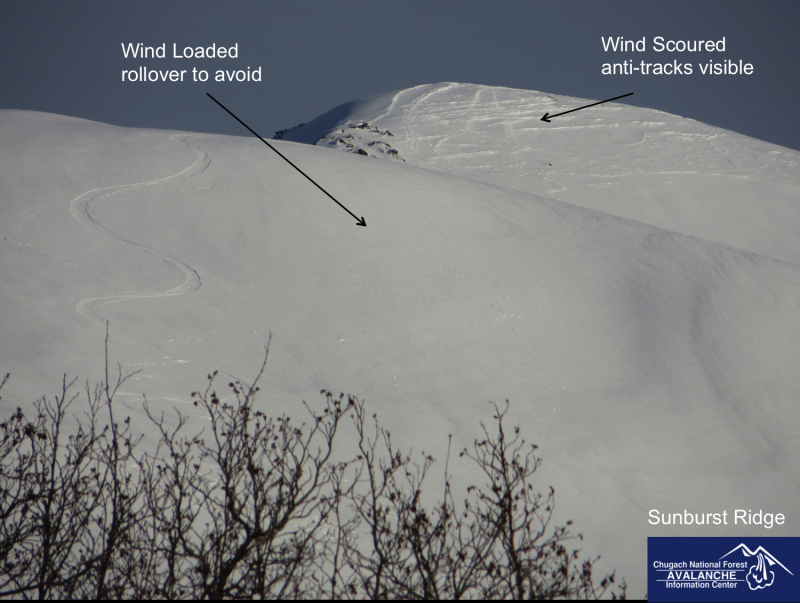 A nice day was had in the backcountry yesterday with mostly sunny skies and light Northerly ridgetop winds. Temperatures were in the low to mid 20’s F on the ridgetops and in the low 30’s at 1,000′.

Today looks to be similar – another warm spring like day – with clear skies and light variable ridgetops winds. Ridgetop temperatures should be in the low 20’s F with valley bottoms in the low 30’s F.

Looking ahead to Friday through Sunday, another juicy North Pacific storm is on tap. Once again this low pressure will pump very warm air from the South along with the moisture. Models are showing a rain/snow line around 2,000-2,500′ at this point with accumulated precipitation in the 1-1.5″ range beginning Friday afternoon through Sunday.

*There is no wind information for both Sunburst and Seattle Ridge. The next closest stations near Turnagain Pass are Max’s Mountain (Alyeska) and Penguin Peak (above Bird) and Fresno Ridge down near Summit Lake. We will be fixing these as soon as possible!