“The phrase rinse and repeat is being uttered to describe this very persistent pattern” as stated in the Southcentral NOAA forecast discussion yesterday. Rain will remain the theme for today, but that shouldn’t be an excuse. Keep those chins up, winter does exist at higher elevations. Put on your best Gortex, bring an extra pair of gloves, and throw some dry clothes in the car. You might even get lucky – yesterday a short break in the weather made for some fun wet pow turns above 2500’ and corn skiing down low. 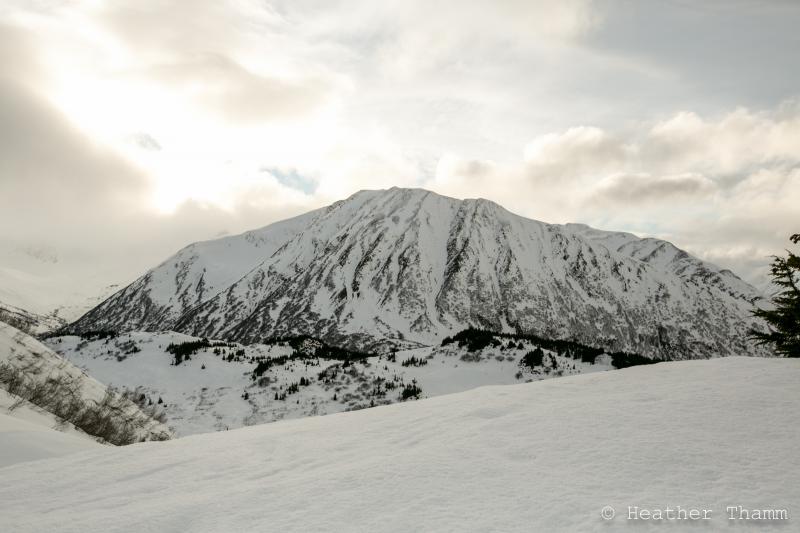 Glide avalanches remain the primary concern in steep terrain below 3000’. Over the last three days many glide avalanches have released on the Eastern face of Seattle Ridge, and others have been observed on Eddies and Cornbiscuit. Glide avalanches occur when the snowpack as a unit slowly moves over the bed surface below. Water lubricating the slick bed surface can speed up this process, but glides are also known to release when temperatures are cooler. A glide often begins with a large crack in the snow, but it is possible for a glide to release without a crack preceding it – especially on features where the terrain does not support it from below. Be cautious, avoid slopes with any recent glide activity, and don’t put yourself under an open crack.

New snow covering a recent glide observed on the Southwest side of Cornbiscuit, mid elevation. Photo by Tim Glassett 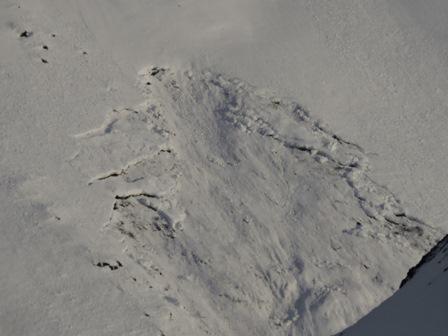 Over the last two days 3-6” of wet snow fell on a firm crust between 2500’ to 3500’. Today another .86 inches of rain is expected with rain/snow line around 3000’ making human triggered wet loose avalanches possible on steep terrain. Wet loose avalanches usually take a little force to get them moving, but quickly pick up volume as they move downhill.  This will be a hazard on large sustained steep slopes between 2500’ – 3500’. Keep an eye out for recent snowballing, an obvious sign of wet saturated new snow. (See photo below)

At lower elevations rain has been draining through the snowpack making the snow wet and poorly bonded. Below 2500’ human triggered wet loose avalanches are possible. Again avoid sustained steep slopes or terrain traps, like a steep drainage.

*Below 2000′ it is our recommendation to stick to areas that have been compacted by other skiers, like the up-track at Tincan, where snow conditions are more supportable and favorable for sking/riding.

Wet snowballs rolling down the Southwest aspect of Pete’s North as observed from the road on Jan.13, 2015 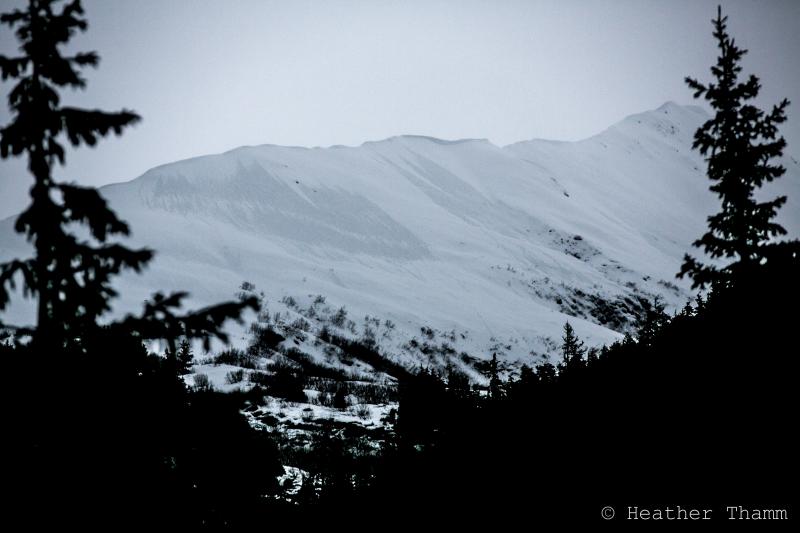 At elevations above 4000’ snow accumulation of up to 1-2’ is possible. Sustained Eastern winds 20-40mph will continue throughout the day along with more snow at this elevation band. Human triggered wind slabs of up to 2’ thick will be possible today on leeward slopes above 4000’.

Above freezing temperatures, high winds and rain have been the theme over the past week and this persistent weather pattern will continue into the coming days.

Over the last 24 hours heavy rain became light in the morning and Turnagain Pass only received 0.2 inches of water compared to Girdwood at 0.85 inches. Winds were mostly East 20-25mph with ridgetop temps around 30F. Rain/snow line was between 2500′ and 3000′.

Today temps will remain warm with rain/snow line around 3000′. Strong East winds will continue (25-40mph) and rain will increase in intensity early this afternoon with 0.86 inches of water expected throughout the day.

More rain is likely overnight, 1.38 inches is forecasted to fall at higher elevations in Girdwood and Turnagain Pass. Winds will remain strong into the evening and rain/snow line may drop slightly to 2500′.