There is a MODERATE avalanche danger on all aspects above 2,500′. The possibility remains for a person, or group of people, to trigger a large and dangerous slab avalanche that breaks 2-3′ deep on a layer of buried surface hoar within the snowpack. This is a low probability but a high consequence situation and results in a tricky snowpack that cannot yet be trusted.

An additional avalanche concern today will be more obvious – wind slab avalanches. Wind slabs 6-12″ thick are likely to be found and possible to trigger at and above treeline due to the strong winds throughout our region yesterday.

A generally  LOW danger exits below treeline where winds did not affect the surface snow. However, it is important to keep in mind what you are traveling under and watching for other parties that may be above you.

Did Santa bring you a new a smartphone for Christmas? Do you have one capable of downloading an app?!  Click here for information on how to participate in this very interesting research project: “Understanding Travel Behavior in Avalanche Terrain: A Crowdsourced Approach“.  Researchers from Montana State University are looking for data sets worldwide and we can help provide some valuable AK data!

Although new snow has been slowly trickling into the region (2-4″ yesterday), our primary concern still lies with the fact we have a persistent weak layer buried in our snowpack. If you have been following our forecast for over a week now, you are well aware of this layer and its potential to create large avalanches. The culprit is buried surface hoar and is well documented on our observations page. The slab that sits on top is anywhere from 1-3′ thick and is composed of dense settled snow. Adding to the load is the 8-12″ of new snow that has been blown into drifts and slabs over the past week.

This weak layer and slab combination is present from around 2,500′ to the ridgetops. With each day that goes by, the weak layer continues to adjust to the slab and triggering an avalanche becomes less and less likely. But, the catch is, the consequences remain high. If a person (or more likely a group of people) collapse the weak layer a resulting avalanche may propagate across an entire slope and potentially around terrain features into another slope. This is a tricky situation and some things to keep in mind are:

– Obvious signs of instability (cracking or collapsing) are likely not to be present until it is too late.
– Likely trigger points are thin spots in the slab. For example, steep rollovers, rocky areas and thinner snowpack zones such as the south end of Turnagain Pass.

For a safe day in the backcountry this holiday season, we are recommending to continue to keep slope angles below 35 degrees with nothing steeper above you. If choosing to venture onto steep slopes, very careful snowpack assessment is necessary as well as remembering your safe travel protocol:
– Only expose one person at a time
– Have an escape route planned
– Make sure your partners are watching closely
– If an avalanche is triggered, do you know how to use your rescue gear and perform companion-rescue?

*Remember, this type of avalanche problem can result in a large avalanche that can cause traumatic injury as well as burial.

Wind was unfortunately the Christmas word of the day in the Kenai mountains! Sustained winds blew for most of the afternoon gusting as high as 65 mph on Sunburst. This combined with the soft snow that has accumulated throughout the week has formed wind slabs near and above treeline. Snow was rapidly being moved around yesterday. Flagging off the top of the peaks, tracks filling in and small slabs at treeline were observed. Be on the lookout for evidence of windloading and avoid steep lee and crossloaded slopes as well as corniced ridgelines. While traveling, look for pockets of wind drifted snow around terrain features, rounded pillows, chalky or hard snow. Also, watch for shooting cracks as seen in the photo below, these are a red flag that a wind slab is present.  Any snow left to transport may continue to be moved and deposited with the forecasted moderate winds today. 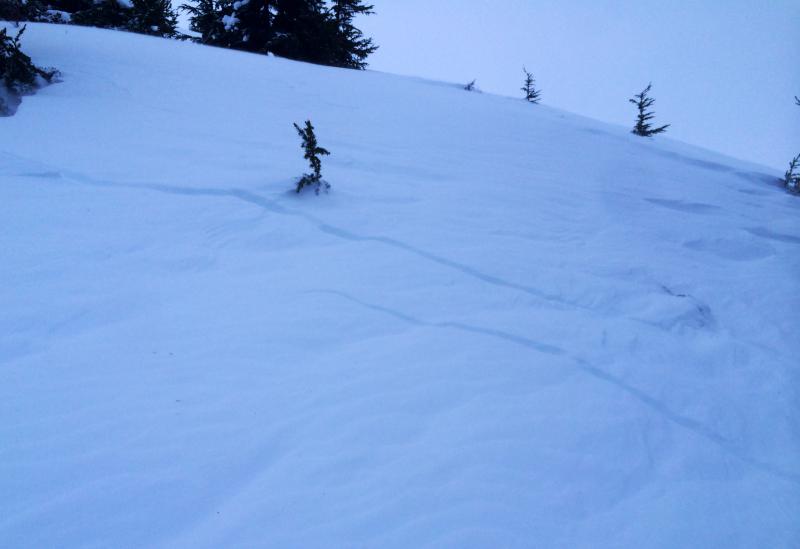 During the past 24-hours the mountains have seen 2-4″ of new low density snow with strong Southerly winds  (see detailed table below). The rain/snow line hovered around 500′ with precipitation shutting off around 1pm. Temperatures that were in the mid 30’s F at sea level and the mid 20’s F on ridgetops, have decreased a few degrees overnight with mostly clear skies.

Today, we are in store for partly clear skies with a snow shower or two moving through – adding a trace of snow at best. Ridgetop winds, which shifted to a Westerly direction overnight, will continue in the moderate category (10-20mph) through the day from the West. Temperatures look to rise to around 30F at 1000′ and the mid 20’s F on ridgetops.

Coming into the weekend, skies should remain mostly clear tomorrow with moderate, to strong at times, Westerly to Northerly winds. Sunday, things begin to change dramatically. A large scale low pressure system far to our south moves north that will usher in a strong and warm southerly flow. This flow will bring warm temperatures to our region with precipitation in the form of rain (yes, again) up to elevations as high as 2000′. Cross your fingers enough cold air is in place to keep the rain/snow line low!