Conservative terrain selection is the key for a safe day in the backcountry. Safe places to recreate are slopes 30 degrees or less without steeper terrain above or connected to you.

For anyone who has taken an Avalanche Level 2 course and interested in a refresher check out the Alaska Avalanche School’s €œLevel 2 refresher/Observer Workshop €. The course will be a lot of fun and taught by CNFAIC’s Wendy Wagner and AAS’s Eeva Latosuo.

There was no new avalanche activity reported yesterday. Though once again, few people are venturing into avalanche terrain, including myself. We did get some additional photos sent in of the natural cycle that occurred two days ago (see photo below as well as the link). These avalanches were breaking in the weak snow near the ground and taking the majority of the snowpack with them. Triggering a large slab that sits on the brink is the essence of our primary concern.

Without much change in the weather, it will take a person, group of people or a snowmachine to trigger one of these avalanches. After this last storm the slab is becoming thicker, up to 3’ in places. This can make it harder for your weight to impact the weak layer at the base of the pack and trigger a slide – but the consequences are high. 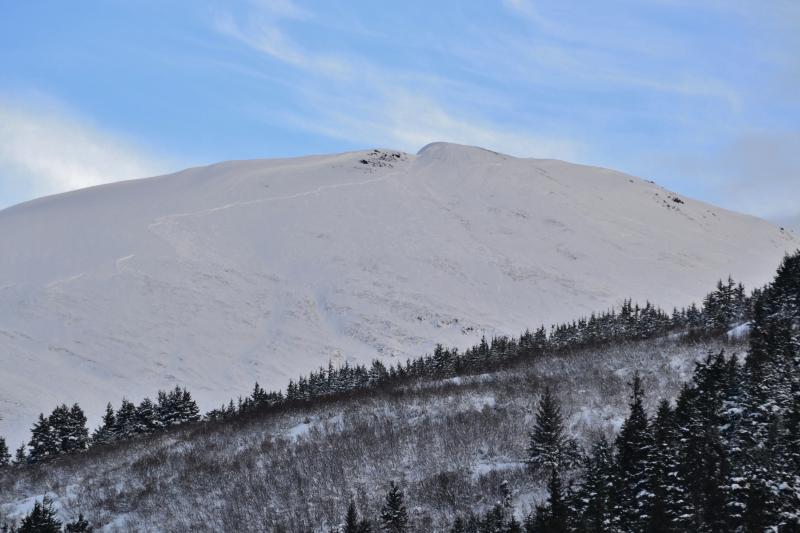 A few words on snowpack assessment:

Information has been limited since the end of the weekend’s storm. With little visibility and very few people testing the steeper slopes our main clues for evaluating the snowpack continue to be snow pit data and collapsing.

Snow pit data: What we are finding is a slab between 2 and 3 feet thick composed of all the December and January snow (4.8” water equivalent at 1880ft). Under this is the well documented weak faceted snow above and below the December drizzle crust. Stability tests are showing that it’s getting harder to collapse the weak layer(s), but once failure occurs all bets are off and large dangerous avalanches are likely if the slope is steep enough.

Collapsing: Several people, including our staff, continue to report collapsing while traveling. This means a person can trigger a failure in the weak faceted snow and subsequently an avalanche. What this tells me is that even though the pit data says it should be hard to trigger a slide, maybe it’s not that hard after all. These obvious signs of instability should always trump pit results.

Below 1,500’ a series of crusts and wet snow make up the snowpack and triggering an avalanche is unlikely.

Yesterday morning a small system moving through added 1-2 € of snow to the upper elevations on the Pass and .1 € of rain below 1,500′. Alyeska, on the other hand, was favored and reported 6 € on the upper mountain with rain at the base. Winds during the past 24-hours have decreased from the 20mph range to the 5-10mph range from the East and temperatures have remained in the 20’s on the ridgelines and low 30’s at 1,000′.

Today we should see mostly cloudy skies and warm Southeasterly flow with no precipitation. Temperatures look to remain in the mid 20’s above treeline and low 30’s below treeline. Ridgetop winds will be light from the Southeast in the 10mph range.

Tonight into tomorrow the warm conditions remain with a chance for 1-2 € of snow and rain below 500′. The next good shot of precip is difficult to tell as the weather models are having a hard time with the extended outlook.