For slabs that are persistent and snow not quite consistent, a MODERATE avalanche Danger exists for skiers and snowmachiners amiss.   Above tree line today a small wind slab may prove your biggest concern for Xmas-going fun seekers in Turn-again.   Below tree line, the danger is LOW where the snow on the ground is mostly stable and sound.

We are truly grateful for the support we have from our community this holiday season!  Merry Christmas from the CNFAIC staff to you and your families as we wish you all a fun and safe holiday of backcountry pursuits!

A generally poor structure to our snowpack is keeping the persistent slab our primary concern again today.  Avalanche activity appeared to peak on Sunday with two human triggered avalanches in the Turnagain area.  Cold temperatures and a lack of weather today will allow our snowpack to further adjust, however it doesn’t take long to dig down to the ground to recognize the problematic weak layers that lie beneath our slow-to-build slab.  Since the drizzle crust of December 7/8 (17 days ago) we have received 2.3 inches of water, which translates to about a 16-inch slab.  Snow pit tests yesterday were consistently failing at this interface of faceted snow directly above the crust.

Small spells of moisture thus far have allowed our snowpack to adapt a little at a time, not overloading weak layers to the point of widespread natural avalanching yet.  Add a skier or snowmachiner into the equation on steep, wind loaded terrain and producing an avalanche may be possible today.  Specifically in the higher elevations where the wind has produced a deeper, heavier slab that overlies this same basic poor structure. 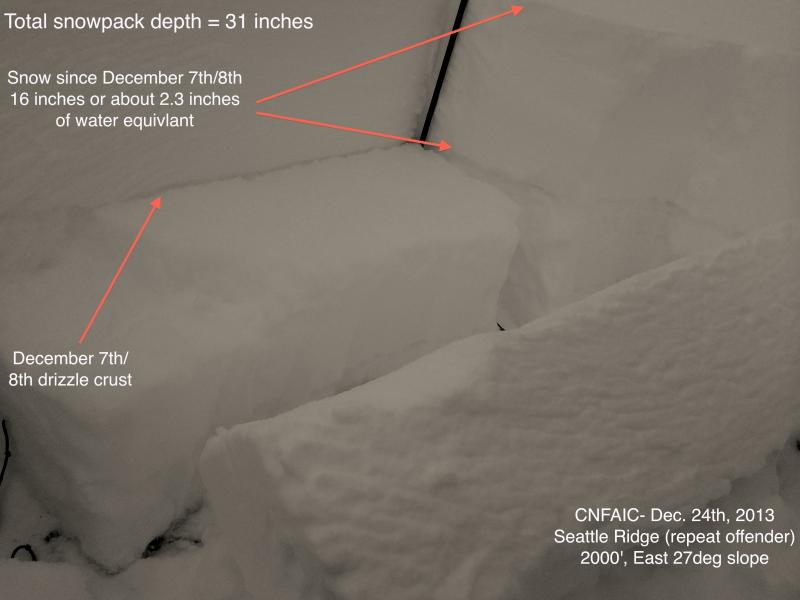 Monday morning we did have a short lived, natural wind slab avalanche cycle where strong winds proved enough to overload weak layers.  In higher elevation areas it’ll be possible to find pockets of dense wind slabs 1-2’ deep on the lee side of wind-raked ridges.  Pay particular attention to firm, hollow sounding snow on south, east and west aspects.  These slabs may sit mid-slope given the moderate to strong winds that blew through our region on Monday and Tuesday.

Yesterday cloudy skies in the afternoon produced just a trace of new snow in eastern Turnagain Arm as a series of low-pressure systems skirted us to the south.   Winds shifted to a more easterly direction but still blew moderately yesterday.   Temperatures stayed cold at sea level due to a weak temperature inversion and gradually grew warmer with elevation topping out in the low-teens on Sunburst.

Don’t expect a Christmas miracle in the form of new snow today.   Rather we seem to have fallen under another persistent high-pressure ridge that appears to be with us at least until the weekend.   There is a decent temperature inversion in place this morning with temps ranging from 2 degrees in Portage to 20 degrees at the top of Sunburst.   Winds appear to again shift back to a northwest orientation today blowing in the 10-20mph range.