We continue to have an overall MODERATE avalanche danger again today. Human triggered soft slab avalanches 12-18″ deep remain possible on steep slopes approaching 40 degrees. Watch for these slabs on all aspects and elevations.

Join us for a FREE  Fireside Chat tonight, Tues Dec 17th at 6:30pm  at the Alaska Avalanche School in Anchorage.   The topic is Snowpack & Mountain Weather.

There were a handful of small soft slab avalanches triggered yesterday. These were relegated to steep rocky zones, ridgelines and rollovers. In the photo below you can see several crowns on the ridge as well as the rollovers around the sun/shade line. Today’s concerns mirror those of yesterday. Though the slab continues to weaken with the cold weather, there are likely still pockets where someone could kick off a slab. These areas are most pronounced in the steep rocky zones and on steep convex rollovers. 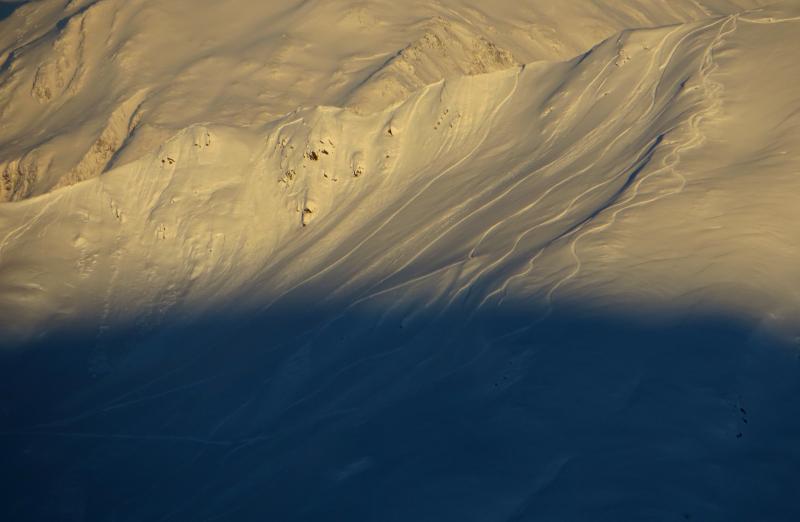 The weekend’s storm that deposited 14-18+” of very low density snow has been settling quickly – around 6″ in fact. This has helped the snow become more cohesive and hence the slab avalanche activity we have seen over the past couple days. However, counteracting this is the cold and clear weather which is loosening the snow surface and weakening the slab. For anyone headed out today, the majority of the snow surface should feel loose and unconsolidated but keep a close eye for any areas with denser snow.

The snowpack in general has some significant concerns within it for our next load, possibly Wednesday night. Under the new snow is the December drizzle crust which caps a very weak layer of facets. We had reports yesterday of collapsing under the crust in the faceted layer. How will this weak snow/crust/facet combo react as snow continues to pile up is the big question and something we are watching closely.

The cold northerly wind has picked up slightly this morning and is expected to level off in the 15mph range through the day. This should be enough to create soft wind slabs out of the light snow sitting on the surface. Though much of the terrain could remain wind free today, I’d expect there will be some areas the wind will move snow around, most likely on the higher peaks and ridges.

Cold arctic air continues to spill over us from the north. Temperatures have stalled out in the minus single digits to single digits during the past 24 hours. Summit Lake is reading -17F this morning, burr.  Wind that has been calm is just starting to bump up with averages in the 10mph range from the North.

Today, we will remain in the cold north flow with clear skies and single digit temperatures. The only change from yesterday will be the wind which is expected to increase slightly, averaging 15mph with gusts in the 20’s from the North.

Another round of snowfall is looking promising for Wednesday night into Thursday. Models are showing around .8″ of water (~8-10″ snow). Temperatures should remain plenty cold for snow to sea level. Stay tuned.