The avalanche hazard is MODERATE today above and below treeline.   Snowfall that occured over this past weekend has deposited soft slabs up to 18 € in depth.   These slabs will be sensitive to human triggers today on all aspects and elevations.   Human triggered loose snow sluffs will also be a concern in steep terrain today.

Join us for a FREE Fireside Chat tomorrow, Tues Dec 17th at 6:30pm at the Alaska Avalanche School in Anchorage.   The topic is Snowpack & Mountain Weather.

All motorized areas on the Chugach National Forest remain closed due to low snow cover.   We’ve made some headway this weekend towards an opener but we’re not there yet.   Stay tuned later in the week for an update.

The storm that dropped 12-18” of new snow on Turnagain Pass came down with very little wind and relatively cold temperatures.  The rate of loading was slow enough to not create widespread natural activity.  Over time this new light density snow has formed into more cohesive slabs.  Yesterday we received numerous reports of low volume slab activity around Turnagain Pass.  All activity observed and reported yesterday ran on a crust that formed earlier in December.

The crust that exists below this new snow is fairly uniform in its distribution (i.e. is similar on all aspects and elevations).  The new snow is also uniform in its distribution.  The interface between this crust and new slab has shown poor bonding in many areas.  As such, all aspects above and below treeline are harboring soft slabs that will continue to be sensitive to human triggers.  Throw in the occasional pocket of buried surface hoar into the mix and it becomes trickier to figure out where the most sensitive areas are.  Your best bet for avoiding this problem today is to stick to lower angled terrain. 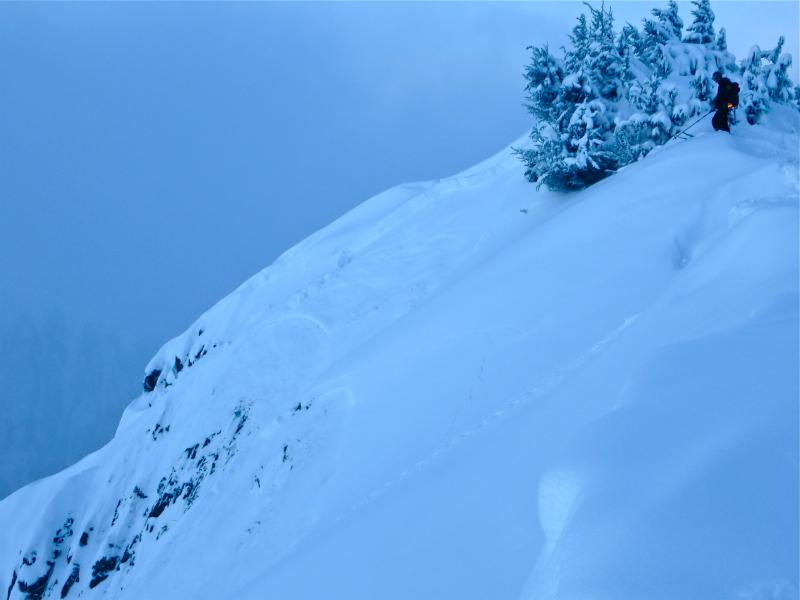 Loose snow avalanches will begin to come into play a bit more today with cold temperatures helping to weaken the snow surface.  Expect sluffs to run slowly and be low volume.  Pay attention to sluffs in steeper terrain where terrain traps are present.  While the volume will be low the chances for injury will go up if you are knocked over and carried into trees, over rocks or into gullies.

The mountains around Eastern Turnagain Arm picked up a trace of new snow in the past 24 hours.   Winds have been light out of the Northwest and temperatures have averaged in the single digits F.   Ridge top temperatures early this morning are hovering around 0 degrees F.

Clear and cold is in store today as a ridge of high pressure has built into the area.   Winds will be light out of the North and Northwest.

Weather conditions will remain similar over the next several days.   The next chance for precipitation looks to be late Wednesday into Thursday.