It seems as though winter has arrived. More so in some areas than others. Below is a quick rundown of storm totals from the weekend.

Rough estimates as of now:

Winner – Hatcher Pass  – up to 3′ and more at the upper elevations, dang!  HPAC Bulletin HERE.

Second – Girdwood Valley and the Front Range – 18″ and more at the upper elevations.

Third – Turnagain Pass and Summit Pass – 10-12″ and likely more at the upper elevations.

This was generally a warm(ish) storm with wet snow at sea level (in Girdwood) to dry snow at the mid and upper elevations. The satellite image shows the plume of moisture that is funneled up from the south. The flow gets channeled up Cook Inlet into the Talkeetnas and splits (to some degree) around the Kenai – image from yesterday Nov 10th, 3pm. Hence the greater snow amount at Hatcher Pass. 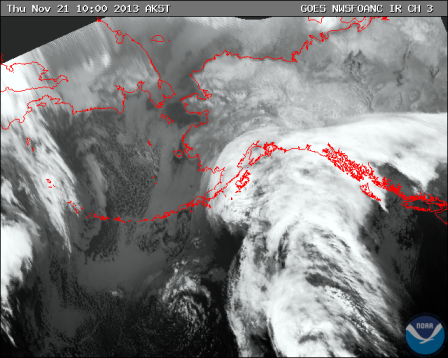 Along with the new snow comes the avalanche season, and it is here in many areas. Things to be on the lookout for are both storm snow instabilities as well as how the new snow is sticking to the variety of preexisting surfaces.

Storm snow instabilities: These are in the form of  fresh wind slabs,  sluffing  in the new snow or soft slab avalanches often due to  upside-down storms.  Simply being aware of your surroundings can tell you much about what type of storm snow issues you may have to deal with.

Preexisting surface concerns:
–  Bare ground. This can be a problem when the ground is warm. If new snow stacks up quick enough, storm snow can be lubricated from underneath and slide – either in a slab or a point release avalanche.
–  Old snow  – above 2000ft. We have little information on the preexisting snow at the higher elevations but all signs point to it being mostly loose and faceted  (photo below). This is due to our recent cold/dry spell. Other types of surfaces that have been reported are  hard windpacked snow, wind/rain crusts and creamy recycled powder. Though none of these surfaces are great for new snow to bond with, it is the loose faceted snow that seems the most prevalent and is a textbook weak layer. Any snowfall or wind deposited snow on top of this is a perfect avalanche producer.  I’d be very suspect of areas with old snow underneath – these areas are usually the same places we want to recreate. 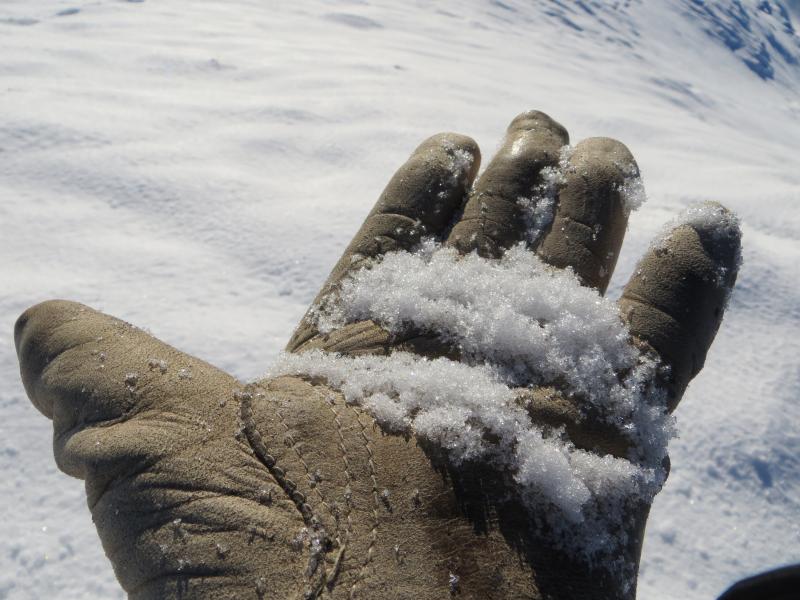 A note on rescue gear:

If you haven’t done so already,  make sure all your rescue gear is in order. That means putting  new batteries in your beacon and cleaning the terminals  if necessary. Check to see if the cable that holds your probe together is still well intact at the hinge points and not going to break upon assembly. Is your airbag working properly? The  American Avalanche Institute has a bunch of great blogs  to peruse as we await the white stuff.

We will be updating this advisory page intermittently during November due to minimal of snow cover. As soon as the snow flies in earnest we will begin issuing full advisories.

For anyone getting around the mountains – please  send us your observations!!

The November 10th storm has moved through and skies are breaking this morning as cold air fills its place. Instibility showers may continue in some areas today but skies should clear for both Tuesday and Wednesday.