Winter continues in the mountains.   Cold temperatures overnight are keeping the meltdown at bay – for now.   The combination of sunny skies and daytime temperatures reaching above freezing has created pockets of unstable snow across our forecast region.   A rash of small avalanches have been reported over the last week, and that trend will likely continue for the next few days.

Despite a generally stable snowpack, we need to watch out for shallow slabs that could be triggered by a skier or rider in steep terrain.

The top 2 feet of our snowpack is where the issues can be found.  Depending on aspect the sun has had significant effect to most slopes – either directly on the surface or by creating a series of now buried crusts.

In general, the better snow can be found on non-south aspects that get less sun exposure.  Watch out for shallow slabs like the ones that we’ve been seeing recently.  Check out the observations page for some examples of what to look out for.

The avalanches we’ve been seeing have followed a consistent pattern.  Size has been low volume, but they run surprisingly far for the amount of snow involved.  Most aspects are affected, with south having more of a crust/facet issue and north having more of a wind slab issue. 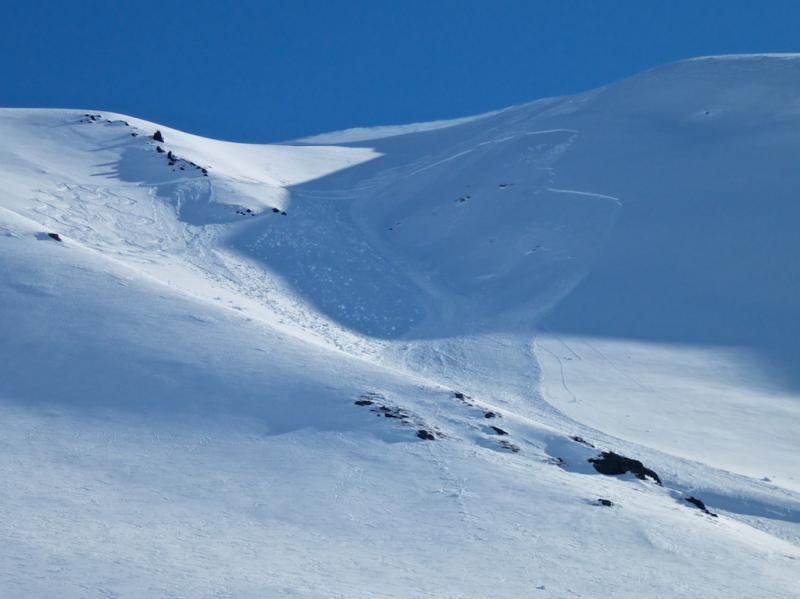 Picture is from last weekend on the south face of Sunburst.

Shaded slopes still hold dry snow at higher elevations.  Those areas are prone to loose snow sluffing by skier initiation.  Just like the slab problem, the volume is relatively small but they can still travel good distances.

Wet avalanche problems will start soon.  The current pattern of cold overnight temperatures has kept it from becoming an issue, but it’s only a matter of time.  As always this time of year – think about heat induced avalanche activity in the afternoon when the surface crust melts and the snowpack loses strength.

No snow or rain expected.  Low temperature to 18 degrees, highs expected to reach the high 30s to low 40s at sea level.  NE wind 0-10 mph, with some areas reaching higher speeds near Whittier and Seward.

The next advisory will be issued Saturday, April 20th.