We have a MODERATE avalanche danger for wind slab avalanches in exposed areas above treeline. A bump in northerly wind will keep the threat for triggering an 8-14″ wind slab possible (thicker slabs may be found in outlying areas that have received more snow in the past week). Additionally, watch those southerly aspects – warmer temperatures today will increase the likelihood of sun induced damp sluffs and shallow slabs sitting on crusts. Otherwise, there is a generally LOW avalanche danger.

During the past several days, people have been able to find and trigger a hand full of wind slab avalanches on a variety of aspects in exposed areas. Many have been slabs overlying a crust, but not all. Yesterday’s activity:

In the photo below, two people were caught in this 1-3′ slab on a NE facing slope – all are ok and the report sent into us is HERE. This was in the Portage Valley area where more snow fell during the past few storms and the winds have been stronger. 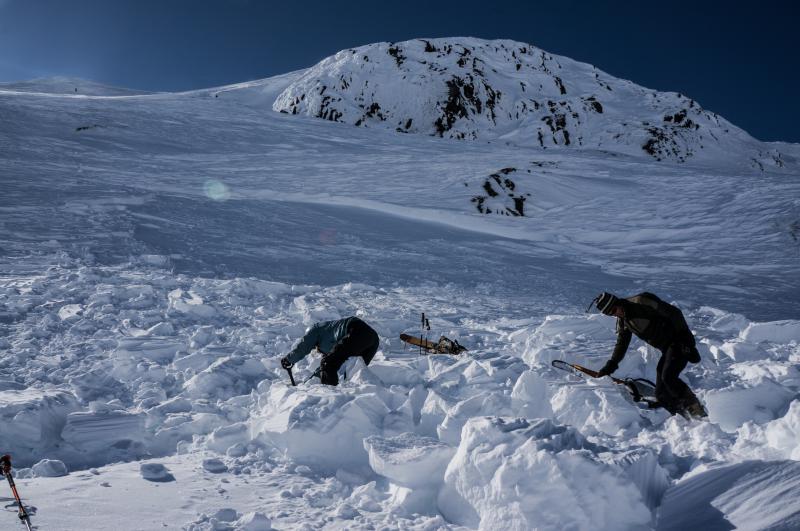 Below is a wind slab avalanche triggered by a person in N facing steep terrain on the south side of Turnagain Pass (more details HERE). Though the main flow is out of the northwest, terrain channeling through the Pass often creates a southerly wind that loads north aspects, especially on the Pete’s, Lipps and Corn Biscuit ridges. It is not always present, but I have see it 4-5 times this season. 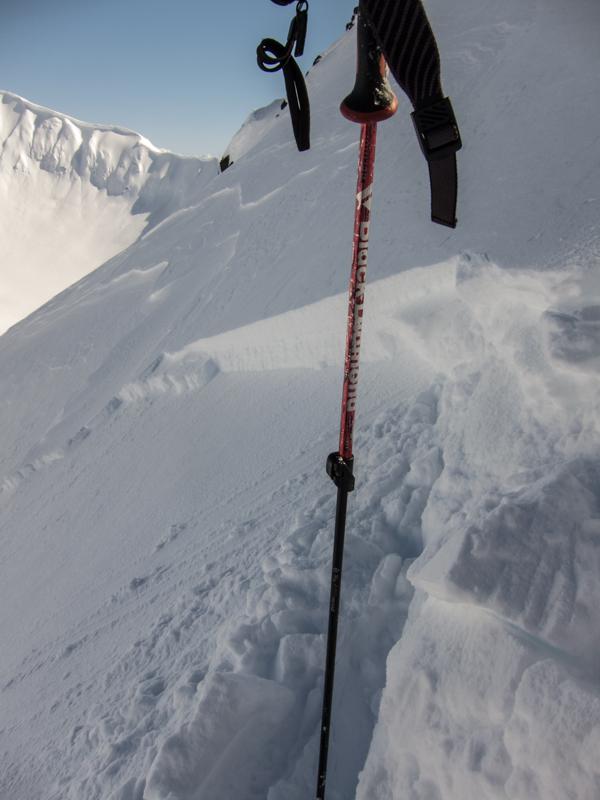 This last photo is of Max’s Mountain in the Girdwood Valley – SW facing @ 2,700′. These two small naturals are believed to have released sometime in the past 36 hours. Report HERE. 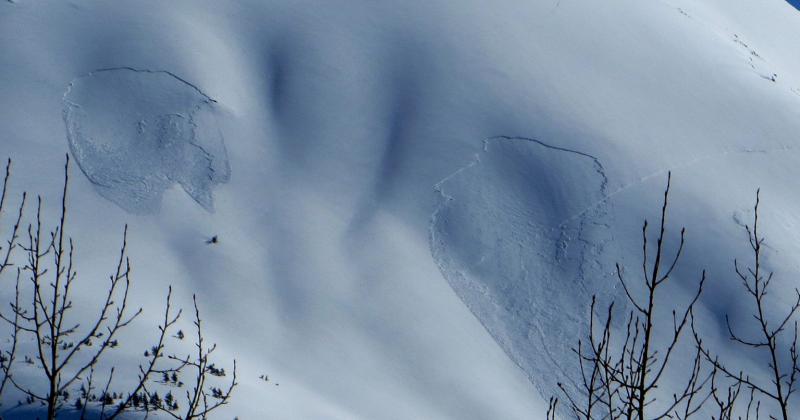 For today, watch for continued wind slab development as the northerly winds are expected to kick back up to the 20-30mph range. There is not as much snow available for transport as there was several days ago, but enough that new slabs can build. Both older and newer slabs are sitting on weak snow over the top of a crust on east, south and west aspects. North aspects, slabs are either sitting on just weak faceted snow or on a hard winded surface. Watch for cracking, collapsing and stiff feeling snow over weaker snow. Remember, before testing out a slope make sure there is NO ONE below you.

The photos above are good reminders that if you are getting after it in the bigger terrain, especially off the beaten path, larger and more unmanageable slabs could be hanging in the balance. Many thanks to all the observations sent into us!!

As the day warms up, keep a close eye out for the snow on southerly aspects to become damp. We have warmer air moving in coupled with direct sun which could overpower the below freezing temperatures. By the late afternoon, watch for damp loose snow avalanches and shallow slab avalanches to be possible to trigger. The winds may be just enough to keep surface warming at bay, but in areas out of the wind we may see a little wet snow action.

Dry sluffs. Many areas have been spared the wind and sport loose surface snow with great riding and skiing conditions. Watch your sluffs in steep terrain.

Yesterday was yet another chilly blue-bird day for the mountains of the Eastern Turnagain Arm. Over the past 24 hours, ridgetop weather stations have averaged 10F with the warmest reading of 13F at 6am this morning. Winds have averaged 6mph from the northwest with a max gust at 6am as well at 21mph.

Today, the northwest winds are forecast to continue increasing to 20-30mph with stronger gusts. Temperatures are also forecast to rise steadily, up to the mid 20’s on the ridgetops and mid 30’s at 1,000′. Skies look to remain clear.

Monday and Tuesday temperatures should cool off again and a few clouds may stream by as the flow switches to the east bringing in a moister air mass. Winds are expected to slacken after today as the flow turns easterly.

Fitz will issue his last advisory for the season tomorrow, April 15th.   It is that time of year where funding is running low and we are slowly winding down Avalanche Center operations.