The majority of terrain around the Eastern Turnagain Arm continues to have a LOW avalanche danger today. There are however a few things to keep in mind when enjoying March’s amazing weather and snow. These are in the form of cornices and loose snow avalanches. Cornices are large, overhanging and may release spontaneously. They are easy to spot and limiting exposure time underneath is prudent. Human triggered sluffs can be expected within the dry snow on shady steep slopes and, if the day heats up enough, watch for shallow moist sluffs on southerly slopes.

For the numerous folks getting out and enjoying the backcounty yesterday, it was a fairly quiet day avalanche-wise. The only reports of snow moving downhill were in the form of wet loose and dry loose avalanches.  Yesterday’s high clouds and cool breeze kept surface warming at bay and spared some southerly aspects from becoming wet and gloppy, but not all.

Photo below is of a loose snow avalanche triggered by a skier on a warming southerly aspect. Once snow becomes moist by warming it gets “stickier” and will often entrain quite a bit more snow on the way down. 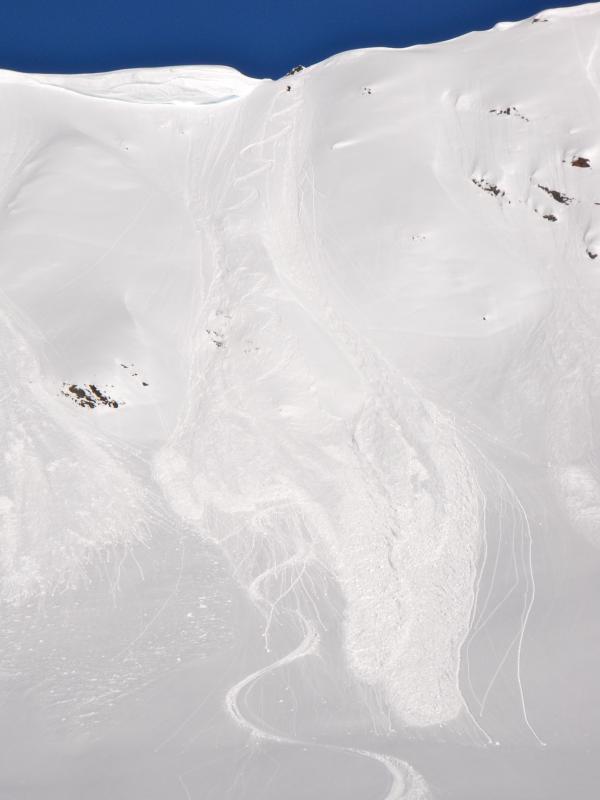 Today we can expect a carbon copy of yesterday. We do have colder air with light winds moving in which will have a good chance at keeping south aspects from becoming damp. Below are a few things to keep in mind as our snowpack is quite stable and we are in the “Normal Caution” part of the avalanche spectrum.

Things to keep in mind:

1.  Cornice fall:
Cornices are large and looming but easy to see and easy to avoid. They have potential to do significant damage and time spent underneath them should be as limited as possible.

2.  Loose snow:
Dry snow sluffing on northerly shaded aspects will again be prevalent today. Sluffs continue to be low volume and manageable. Wet loose avalanches are possible on southerly aspects at lower elevations where the winds are calm. The cold air and breezy wind will likely keep the snow surface from warming in most areas.

3.  Persistent slab:
We have had a couple reports of people finding isolated areas where last Thursday’s 6-10” storm buried intact and upright surface hoar. This surface hoar grew during last week’s clear period and was mostly destroyed by both sun and wind in the majority of terrain. However, as folks poke out into the far reaches of the mountains there is a chance of finding an isolated pocket that would be around 6-14″ deep.

Yesterday was another great day of mostly sunny skies with cool ridgetop temperatures in the upper teens to low 20’s F. Winds were light from the east around 5mph. Overnight, clear skies have allowed temperatures to plummet, especially in the usual cold pools. In fact, the Granite Creek weather station near the Johnson Pass trail head is reading -17F this morning, burr. But, most sea level and ridgetop stations are reporting around +10F. The winds have shifted to a northerly direction and are averaging 5mph with gusts to 13mph this morning.

Today we can expect continued mostly sunny skies with colder temperatures and a breezy northerly flow. With colder air moving in, we may only see warming up to the mid-teens at treeline and above. Winds are expected to be 5-15mph from the north and possibly pick up to the 20mph range by the evening.

For the remainder of the week our €œMarvelous March € looks to continue with clear and cool weather. This is a 180 degree swing from February where mild temperatures and precipitation fell almost every day.

Fitz will issue the next advisory tomorrow morning, March 18th.