We continue to have a CONSIDERABLE avalanche danger above treeline on all aspects. Natural avalanches are possible and human triggered avalanches are likely on slopes steeper than 35 degrees. Any avalanche triggered has the potential to be very large and dangerous. Below treeline the danger is MODERATE where it is less likely €“ but still possible – for triggering a slide. Expert level travel skills and conservative terrain choices will be key for staying safe in the backcountry.

Though there were no new avalanches reported or seen yesterday, we continue to be most concerned with a person triggering a deep and unsurvivable slab avalanche. If there is one type of avalanche that causes more hair pulling and head scratching among snow and avalanche professionals it is the deep slab problem. This is mostly due to the season long slow decline in likelihood of triggering (good) but the increase in size and destructive power (bad).

The pack now averages 6 to 8 feet deep and is slowly adjusting to the load that has been placed on it since Christmas. The weak snow from the October and November dry spells make up the problematic weak layers residing in the bottom foot or so. The most likely place to trigger one of these monsters is at a thin area in the slab. These “trigger points” are often around rocks, ridges, rollovers and trees. This is a good thing to keep in mind as we are now at a stage where recent avalanches are often the only “obvious clue” to watch for. We have gotten lucky on two occasions so far – Seattle Ridge January 8th and Tincan January 2nd. These slides were both likely triggered from thin areas of the slab. The message remains: This is an unusual and dangerous year and for riding it out safely, it will require a shift in our backcountry travel practices.

More info is up from the Seattle Ridge Repeat Offender slide. Check out Kevin’s video  from Wednesday and peruse the observation page for several photos. A couple photos below show a view up the slide path and a section of the crown face. A tangle in this would have been deadly. 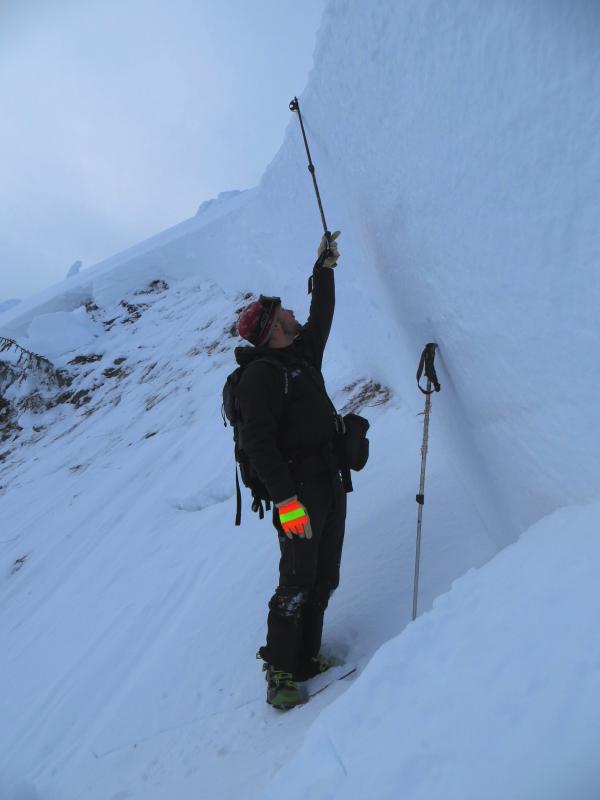 Winds have already bumped up this morning from the east on the ridgelines and are averaging 20-30mph with gusts to 50mph. This is the ideal range for forming wind slabs on any slope where today’s wind is depositing snow. Even though forecasted new snow amounts are modest (2-4”), there is still plenty of loose snow existing on the surface for the wind to form sensitive slabs.

Any new wind slab should be discernible by a rounded, pillowy look and the snow will have a stiffer feel than the wind sheltered snow. Watch for cracking around your skis, sled or board. These slabs are likely to be shallow and mostly manageable but if they trigger the deeper weak layers lurking below you could be dealing with a very large and unmanageable avalanche.

Those that made it to the Pass yesterday were greeted with mostly clear skies, a light east breeze and a few inches of new snow. Overnight the clouds have moved back in and a trace of snow has fallen while east winds have picked up. We can expect broken cloud cover today with a chance for 2-4 € of snow. Winds will remain out of the east averaging 20-30mph with gusts to 50. Temperatures are on the rise at the lower (mid 30’s) and mid elevations(upper 20’s) but remain near 20F on the ridgelines.

But the big news is we have a wet, warm and wild weekend ahead of us. A large system will pull warm tropical moisture north into our neck of the woods by Sunday into Monday. Many of you have probably seen the NWS special weather statement. It looks like rain will fall above treeline (possibly well above treeline). What this will do to our avalanche conditions will be very interesting so stay tuned as this system develops.

Kevin will issue the next advisory tomorrow morning, January 12th.