We are issuing advisories 5 days a week through November on Sat, Sun, Tue, Thur and Fri.

The avalanche danger will remain CONSIDERABLE today on slopes steeper than 35 degrees above 3000′ and on all aspects. Recent natural avalanches in this terrain points to the continued instability of the snowpack. Slopes most likely to be triggered will have a slab of stiff snow overlying weak snow near the ground.   Safer slopes are those lacking a slab and consist entirely of weak snow (making hitting rocks more likely). Below treeline, there is minimal snow cover that does not have the structure of the higher elevations and has a LOW avalanche danger.

With little change in the weather, we had yet another natural avalanche release in the heart of Turnagain Pass sometime late on Wednesday, Nov. 21st , or early yesterday morning. This was on the SW face of Sunburst – photo below and more details HERE. The slide was believed to be triggered by a slight bump in wind that loaded the slope and tipped the balance. The loading was minimal, demonstrating the precariousness of the pack. It is events like this that is keeping us on our toes. 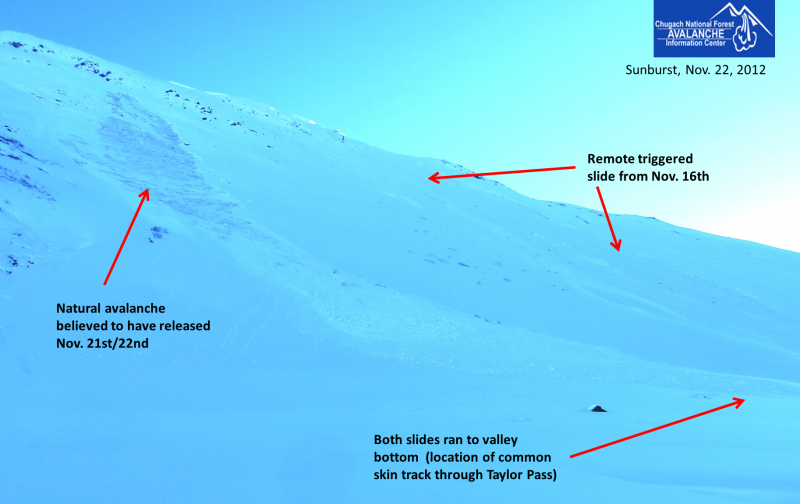 Good travel practices are essential right now. We have seen 5 natural avalanches the past 4 days and heard of 0 human triggered avalanches (the past 4 days). I believe this is attributed to folks managing their terrain with lower slope angles and looking for areas where the snow cover is entirely weak snow (sugar) and lacking a slab. Suspect slopes are those with supportable stiffer snow over weaker hollow snow and are to be avoided. As we have mentioned, a ride down one of these rocky bed surfaces if caught could get ugly. Straying a bit from the established skin track and feeling for collapsing and cracking as one travels is a good way to gain a sense of the snowpack.

The weak snow from October continues to plague us and the past several days of cold and clear weather is not helping to strengthen it. But, what the weather has been doing is actually weakening the strong layer (the slab). If the slab becomes weak enough (through faceting) the snow cover will change back to one layer of loose sugary snow. In this case, the avalanche danger decreases substantially until it gets covered by the next bout of snow and/or wind. This process has already occurred on certain slopes, making them safer than they were one or two weeks ago. 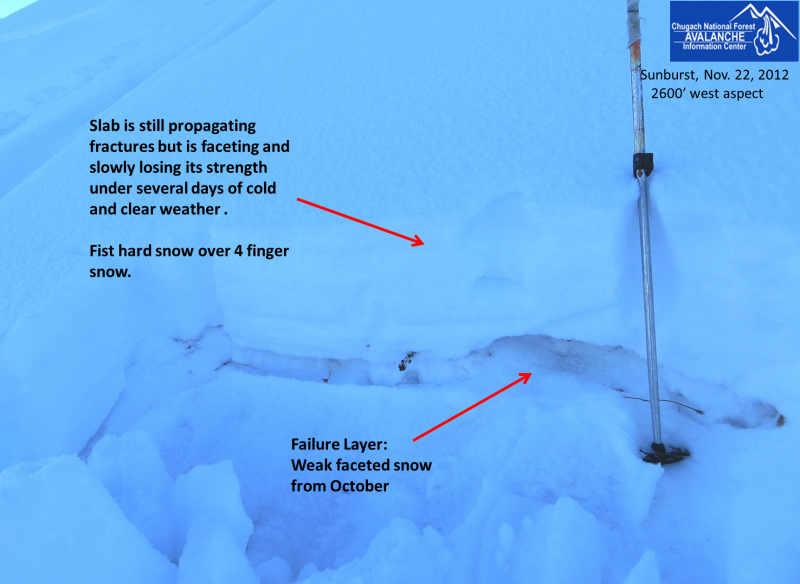 Below treeline, the structure of a slab over weak snow is not present. The pack here consists mostly of 12-24″ of loose weak snow with a crust layer about 8-10″ down from the surface (formed by the rain and wet snow on Nov 2nd).

Two words: clear and cold. The single digit temperatures that have been pooling in our low elevations and parking lots will remain in place for the next several days.  The good news is warmer air, in the mid 20’s, sits just above the inversion on the ridgelines. The northerly winds that picked up yesterday have decreased and should blow around 5mph from a northerly direction today. As for snow, there is a chance we may see some flurries fall the middle of next week. Other than that it looks bleak.

Kevin will issue the next advisory Saturday morning, November 24th.