Welcome to the new website layout!   We are joining a nationwide trend to give the forest service avalanche centers a similar look and provide information in a consistent manner. The content only has minor changes from last season, but we think you will like the new web interface. Let us know your thoughts.

We are issuing advisories 5 days a week through November on Sat, Sun, Tue, Thur, Fri. The next advisory will be Tuesday November 20th.

BOTTOM LINE
The avalanche danger will remain CONSIDERABLE today above treeline.  The most likely places to trigger an avalanche are upper elevation slopes over 35 degrees on all aspects where a slab overlies the weak snow from October. Very few people have ventured into this upper elevation steeper terrain, but when they do, it seems they don’t have too much trouble triggering an avalanche breaking near the ground. Managing the terrain will be the key to safe backcounty travel. Additionally, watch for fresh wind slabs in exposed areas with the expected 2-4 inches of snow and moderate ridgetop wind. Below treeline, there is a MODERATE avalanche danger.

This bottom line will pertain to monday, November 19th, as well.

With Wednesday’s 6 inches of snow settled to ~4 inches the snow surface was quite inviting yesterday. Several people were out enjoying this on lower angle slopes and tracked up areas such as the front side of Tincan ridge. Reports from yesterday were in the form of whoomphing and collapsing but we did not hear of any avalanche activity. That being said, very few people have ventured past the easier accessed lower angle terrain, or short steeper slopes (several of which have already avalanched).

This “persistent avalanche” problem is guilty until proven innocent. We know the snowpack structure is poor. We know there are, at the very least, scattered slopes hanging in the balance waiting for a trigger. Yet, there is uncertainty as to how widespread these touchy slopes are. With a few more inches of snow possible today, warmer temperatures and increased wind, this will only add to the problem.

We went up yesterday to take a look at the avalanche that was remotely triggered from ~200′ away two days ago, Friday (11/16). This was on a steep slope on the southwest face of Sunburst and proves how unstable the pack is. More details HERE and HERE. 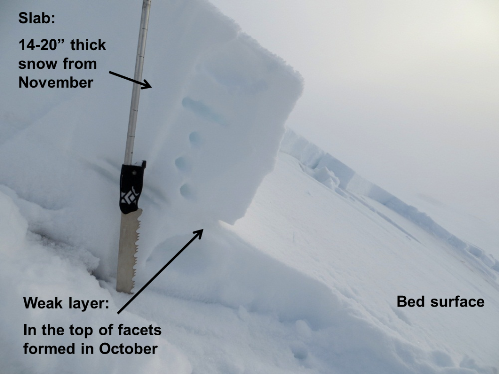 One of the most concerning aspects to our avalanche conditions right now are that the obvious clues so prevalent the past couple weeks are not nearly as obvious anymore – but the avalanche potential remains similar. This means it can be easier to be lured onto a slope before it breaks. The only clue may be the presence of a slab over a weak layer (if one looks for it), but recent avalanches, cracking or collapsing may not be observed. Furthermore, a slope may or may not slide, but if it does, the ride will likely be rocky and unpleasant. These are good things to keep in mind when the ‘go’ – ‘no go’ question comes up.

Below treeline the snowpack is a combination of crusts, low density snow and moist facets. This accompanied with the lack of a slab, mainly due to minimal wind loading, has kept avalanche activity at bay.

Fresh wind slabs may be formed today if the expected 2-4″ of snow with 15mph, gusts to 30, ridgetop easterly wind verifies. With the existing loose snow surface there is plenty of snow available for transport if we only see the wind. Any fresh slabs are likely to be shallow but touchy.

Temperatures have rebounded this morning to ~20F on the ridgetops but are still inverted with mid teens in the lower elevations. Winds have bumped up slightly and are forecast to blow 15mph with gusts to 30mph from the east. Cloudy and obscured skies should keep visibility limited again today and there in a chance for 2-4″ of snow. This unfortunately looks to be our last shot of precip for the next several days to a week. Clear and cold conditions look to set in Monday through Thanksgiving.

Kevin will issue the next advisory Tuesday, November 20th.