Good morning. This is Wendy Wagner with the Chugach National Forest Avalanche Information Center on Saturday, April 28th at 7am. This will serve as a general backcountry avalanche advisory issued for Turnagain Arm with Turnagain Pass as the core advisory area (this advisory does not apply to highways, railroads, or operating ski areas).

This will be our final advisory for the 2011/2012 winter season – has 6 months of AMAZING riding/skiing already past?! Look for an end of season update, recap and thanks on Tuesday May 1st.

There is a MODERATE avalanche danger today for wet slab, glide and wet loose avalanches on all aspects below 3500′. Cooler temperatures and wind should keep these concerns mostly at bay until the temperatures increase again (possibly Sunday afternoon or Monday when the danger may rise to CONSIDERABLE). Keep a close eye on westerly aspects as these have not undergone the “shed cycle” yet. In the case we accumulate more than a couple inches of snow today above treeline, there will be a MODERATE danger for storm snow instabilities. These include, wind slabs from 30-40mph east winds, soft slabs and new snow sluffs.

Little avalanche activity has been seen/reported in the past several days as our clear skies have produced a predictable freeze/thaw regime which has tightened up the pack. The majority of the action (which included several different types of avalanches: wet loose, wet slab, dry slab and glide avalanches, whose remnants still litter the landscape) was from 4/12-4/22 when the pack received its first springtime shock. As Graham mentioned yesterday, you can’t miss the Seattle Ridge carnage on a drive through Turnagain Pass.

Medium to large wet slab and glide avalanches remain our primary concern. Although many east and south aspects have gone through their shed cycle during the past 2 weeks, westerly aspects have not and are still in large part intact and concerning. A look at the west face of Magnum yesterday showed several feet of wet sloppy snow under a 4-5″ thick crust. This crust has been tying the slopes together but once it softens and looses its cohesion, through sun/rain/cloud cover, the sloppy snow underneath will be prime to slide. Cracks became noticeably more visible yesterday with our very warm temperatures and can be seen in the photo below of the west face of the Magnum ridge. 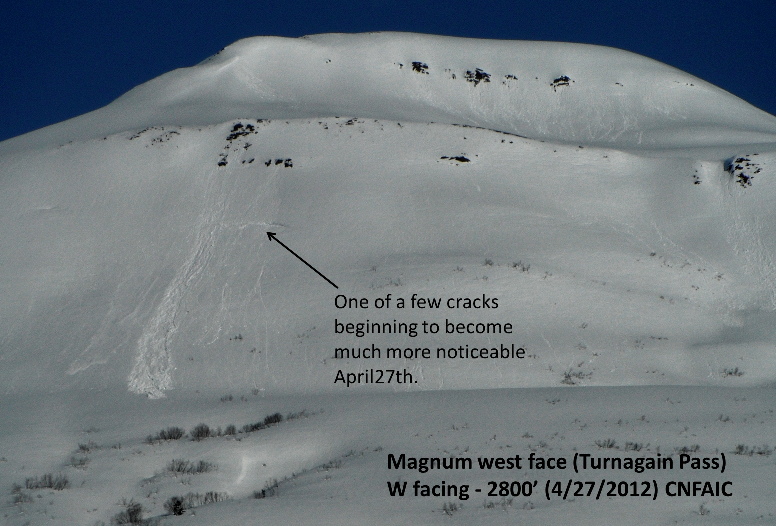 With new snow on tap today and Sunday, the usual storm snow suspects (sluffs, soft slabs and wind slabs) will be a concern if we get more than a few inches. This should bond rapidly with our warm temperatures. However, this is the time of year the sun itself can act like a storm and be a powerful trigger, especially with new snow. Watch for wet point release and shallow slab avalanches at the first hint of sun after this system works though (likely on Sunday afternoon or Monday).

Several of these large overhanging snow monsters are still sticking to the ridgelines despite the warm weather. They absolutely deserve an extra wide berth when traveling on ridges as they slowly peel/melt away.

Areas with dry snow still harbor at least one layer of buried surface hoar. The most reactive was buried on March 27th and is around 1-2′ deep. We have not heard of an avalanche failing in this layer since April 17th but, it is good keep in mind it is out there.

AnCNFAIC Staff sunny, gorgeous day greeted those that ventured into the hills yesterday. Light east winds, 40-50 degree temperatures and only a few clouds in the afternoon provided very comfortable traveling.

We have a weak storm system rolling through today into Sunday. Winds have increased to 20-25mph from the east on the peaks, clouds have moved in and temperatures have dropped to the upper 20’s on the ridges and mid 30’s around 1000ft. Light rain/snow should begin this morning but only an inch or two is expected to accumulate above treeline. The rain/snow line looks to be around 1400ft. Winds will increase into the 30-40mph range today and remain through tonight.

AnCNFAIC Staff inch or two could fall overnight through Sunday for a combined 3-6″ at the higher elevations by Monday. Easterly winds should subside tomorrow and temperatures stay relatively cool until Monday. Remember to check our weather page, link below, for the latest weather info.

This concludes our final advisory of the season. However, look for general information to be posted on Tuesday May 1st. Even though the season is finished, we still want your backcountry observations! They can be submitted by using the button at the top of this page or give us a call at 754-2369. Thanks and have a great summer!