SUMMIT LAKE: The snowpack in the Summit Lake area is generally thinner and weaker, making it easier to trigger a deep slab avalanche near the ground. Be cautious with your terrain choices, and avoid steep, rocky terrain where these avalanches will be most likely.

Member Gear Giveaway: To show appreciation for current members and new members that sign up by January 15, the Friends of the CNFAIC will give away three pairs of skis in a drawing on January 16. Please encourage friends and family to go to our website’s Sponsors & Members page and sign up. For as little as $20 your name will be added to the members list, and you’ll be eligible for the ski drawing! Thanks to Ski AK for donating the skis, and to all of you for supporting your local avalanche center.

Although unlikely, there remains a chance that a person could trigger a deep slab avalanche 6’ deep or deeper, failing on weak snow at the ground at elevations above 2500’. Before stepping out into bigger terrain today, consider the consequence of triggering a large avalanche. These avalanches are difficult to predict for a few reasons:

At some point– hopefully sometime soon– we will be able to tuck this problem away as an additional concern. For now, we are still finding weak snow at the ground, and we are actually getting some stability tests to fail in this layer, making this our primary concern for today. Be aware that the most likely places to trigger a large avalanche failing near the ground will be in the areas with the thinnest snowpack. This could be on slopes that have been wind scoured at some point this season, or in steep and rocky terrain. The total snow depth also gets thinner as you head south from Turnagain Pass. Be aware that if you trigger a deep slab avalanche in a shallow spot on a slope, it can propagate into deeper snow. 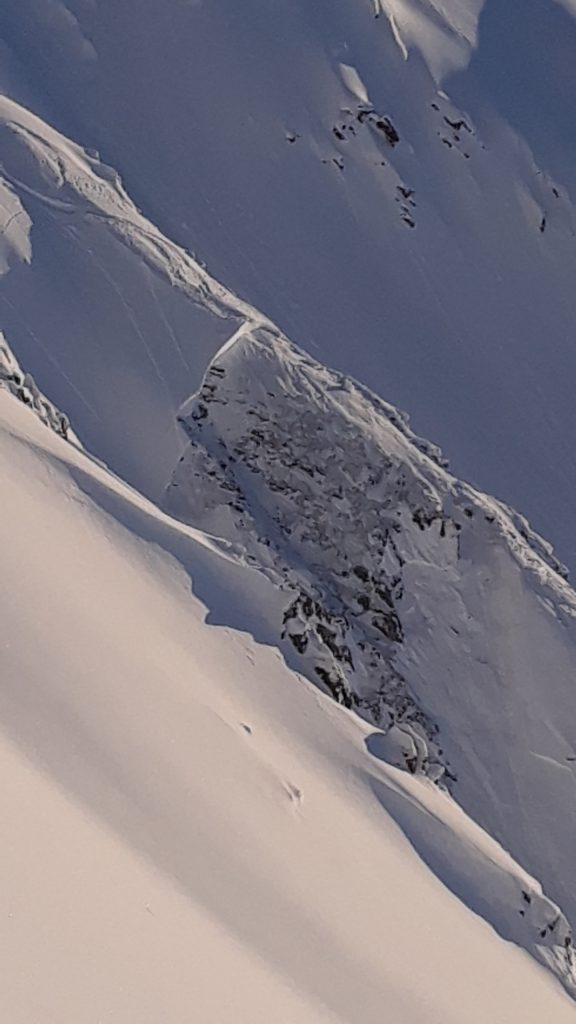 Tincan. This avalanche occurred almost two weeks ago, but similar avalanches are still a concern for now. Photo: Matthew Howard. 12.04.2020

As always, use safe travel protocol to minimize your risk while you are out. Be on the lookout for clear signs of unstable snow like shooting cracks or whumpfs, only expose one person at a time to avalanche terrain (including runout zones), and keep an eye on your partners from a safe spot if you do choose to ski or snowmachine in steep terrain. You will also want to be aware of lingering wind slabs from the past few days, and continue to give cornices plenty of space. The mountains closer to Girdwood have received 6-8” of low-density snow since Monday morning, and although that will not be enough to bump up the avalanche danger, it may be enough snow to create loose dry avalanches that could knock you off your feet.

Today: Mountain temperatures are expected to drop throughout the day, reaching the high teens F by this afternoon at upper elevations and staying in the mid 20’s F at lower elevations. Low temperatures tonight will be around 10 F at upper elevations and 20 F in the valleys. Skies will be partly cloudy, with clouds clearing throughout the day. We are expecting light westerly winds around 5-10 mph, with little or no precipitation.

Tomorrow: We have a chance of light snow tomorrow, with 1-4” possible in the mountains. Temperatures should stay cold enough to keep snow at sea level. Easterly winds are expected to pick up slightly to 10-15 mph, with high temperatures around 20 F at upper elevations and 30 F at low elevations.