A MODERATE avalanche danger remains above the treeline in the Alpine (~2,500′ and above). Wind slabs, in the 6″ to a foot thick range, will be possible to trigger on slopes over 30 degrees. Watch for areas with wind deposited snow and stiff snow over softer snow, especially near ridgelines in the higher elevations. Additionally, keep an eye out for glide cracks and limit any time under these as they could release unexpectedly.

A LOW danger exits below 2,500′ and in areas sheltered from recent winds.

Finding and triggering an older, or newer, wind slab on steep wind loaded slopes remains our main concern. Any wind slab found will likely be sitting on weak faceted snow, or even buried surface hoar, making them possible to trigger even several days after forming. The northwest outflow wind event last Wednesday (11.17) hit the mountains from one direction and yesterday a bump in easterly winds hit them from the opposite direction. Yesterday’s winds were 10-15mph with gusts near 30 for around 8 hours. Luckily, the heart of Turnagain Pass appears to have escaped much of the wind damage so far (as can be seen in the photo below), but not everywhere.

While the majority of the top 12-16″ of the snowpack is soft loose faceting snow, keep your eye out for areas that did see wind loading, for example where previous tracks are filled in or areas with smooth rounded and pillow-like surfaces. The classic signs of stiff snow over softer snow, hollow feeling snow, and cracks that shoot out from you should be easy to identify and hopefully avoid. Slabs could be up to a foot thick and most likely found along the higher exposed ridgelines. 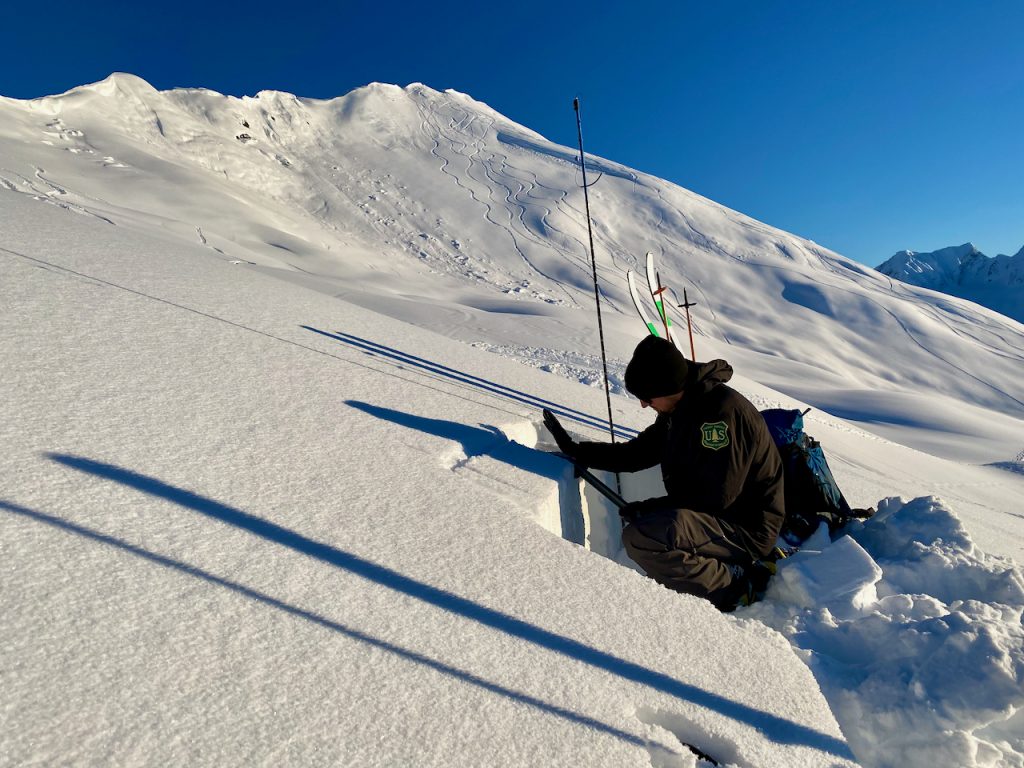 Andrew assessing the upper two feet of the snowpack on Tincan around 3,000′ near the common up-track on Friday, 11.19.21. Varying degrees of soft and weak snow compromise the top 12-16″ of the pack. Under the soft snow sits the Halloween crust/dense snow. No wind slabs were found at this time in this location.

We are watching the development of the top layer of the snowpack because these cold and clear conditions are prime for not only surface hoar to grow on the surface, but for the faceting process to happen. Once we get another layer of new snow on top of this weak snow, we could be in for a change from relatively stable conditions seen so far this season, to unstable. When will this next snowfall hit us? Maybe over Thanksgiving, or even later according the weather model crystal ball.

Avalanche Problem 2
Glide Avalanches
Glide Avalanches are the release of the entire snow cover as a result of gliding over the ground. Glide avalanches can be composed of wet, moist, or almost entirely dry snow. They typically occur in very specific paths, where the slope is steep enough and the ground surface is relatively smooth. They are often proceeded by full depth cracks (glide cracks), though the time between the appearance of a crack and an avalanche can vary between seconds and months. Glide avalanches are unlikely to be triggered by a person, are nearly impossible to forecast, and thus pose a hazard that is extremely difficult to manage.
Size of Avalanches
Avalanche size is defined by the largest potential avalanche, or expected range of sizes related to the problem in question. Assigned size is a qualitative estimate based on the destructive classification system and requires specialists to estimate the harm avalanches may cause to hypothetical objects located in the avalanche track (AAA 2016, CAA 2014). Under this schema, "Small" avalanches are not large enough to bury humans and are relatively harmless unless they carry people over cliffs or through trees or rocks. Moving up the scale, avalanches become "Large" enough to bury, injure, or kill people. "Very Large" avalanches may bury or destroy vehicles or houses, and "Historic" avalanches are massive events capable of altering the landscape.

Despite the frigid temperatures, glide cracks are still oozing open and some have released into avalanches over the course of the last few days. The most recent known release in our forecast zone would be this one from around 2-3 days ago, pictured below on Seattle Ridge.

On the bright side, compared to a month ago, many cracks have slowed way down, have been buried by snowfall and look to be stopping. Staying cognizant of cracks and limiting exposure under them is key. We definitely do not want to be in the wrong place at the wrong time. These avalanches are extremely destructive, are not triggered by humans, and are completely unpredictable. 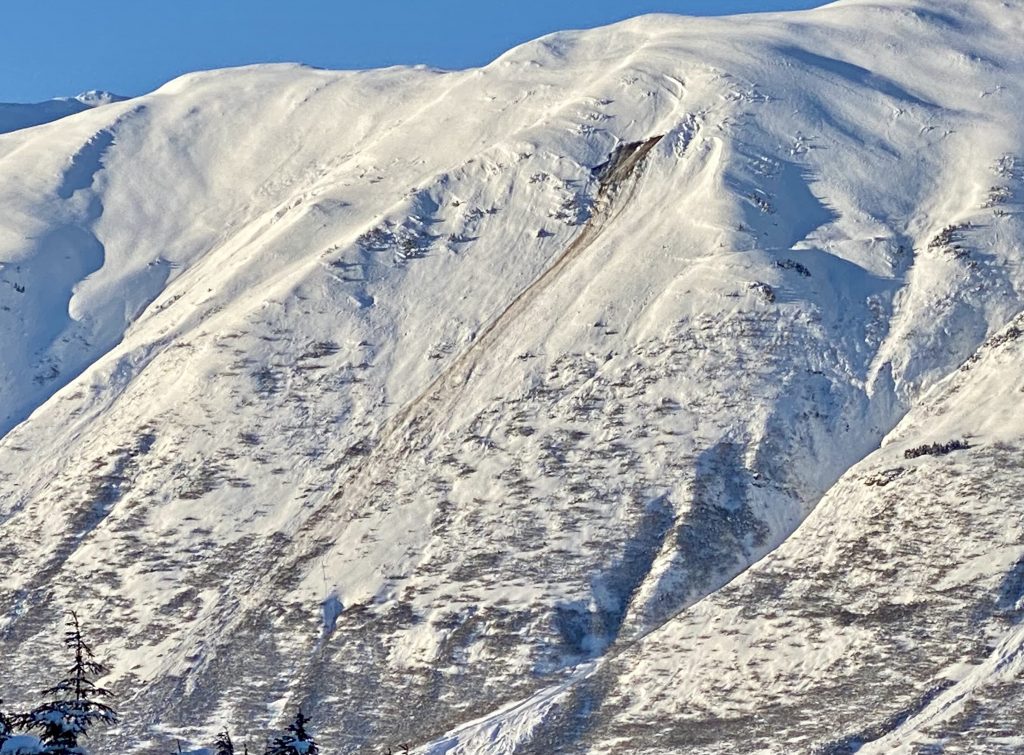 Yesterday:  Cold and clear weather with mostly sunny skies was seen again yesterday. Winds bumped up from the east to the teens with gusts in the 30’s mph midday on Sunburst briefly before swinging around the west and blowing 5-10mph. Temperatures were between 0-15F along ridgetops and slightly colder in valley bottoms.

Today:  Another cold and sunny day is on tap. Winds will remain west to northwest in the 5-10 mph range with gusts in the teens along ridgelines. An inversion is in place this morning with minus single digits in valley bottoms and 5-10F above along the ridgetops. Valleys should warm into the +0-10F midday.

Tomorrow:  Cold and clear conditions look to persist tomorrow. The chance for snowfall is becoming slim to none as the low pressure to our south is moving quickly eastward. We may see some high clouds tomorrow and a small chance for snow Monday into the middle part of the week. It does look like temperatures will be on the rise, back to a more reasonable range in the +teens by Monday.