The avalanche danger is  MODERATE  on slopes above 2,500′. Triggering a slab 1-2′ deep is possible on steep Northerly slopes in the Alpine. Pay attention to changing conditions and as always, give cornices a wide berth and limit travel under glide cracks.

PORTAGE VALLEY:  Cornice fall and/or avalanches from above have the potential to send debris to valley bottoms and into snow-free zones. Traveling along hiking trails, such as the Byron Glacier Trail with steep slopes overhead is not recommended on rainy/snowy days or on sunny afternoons.

FRIDAY AVALANCHE OUTLOOK:
No avalanche forecast will be issued tomorrow. Similar avalanche danger is expected Friday, Apr 19th but with the potential for more snow to fall during the day. Pay attention to changing conditions, evaluate how well the new snow is bonding to old snow surfaces and look for signs of instability.

Yesterday was cloudy with very light showers throughout the day and a total of an inch of snow falling in the last 24 hrs. Rain/snowline was observed to be around 1600′. Today is forecast to be slightly cooler with the potential for another inch or two of snow. The main avalanche concern continues to be shaded aspects in the Alpine above 3,000′, where a weak layer of facets and buried surface hoar exists 1-2′ below the surface. A layer of buried surface hoar was the culprit in two human triggered avalanches over the weekend in Seattle Creek. Both of these avalanches occurred at 3200’ on North aspects and released on a layer of buried surface hoar sitting on a melt freeze crust. One of these avalanches was triggered at the top of a chute. The other avalanche we suspect was remote triggered from 5-10’ away. In both incidents no one was caught.  On Monday an observer reported whumping and found a weak layer of facets in a hand pit in higher elevations above Girdwood. Approach high northerly slopes with caution. Look for signs of instability and stick to safe travel protocol: evaluate terrain for consequences, expose one person a time, watch partners and have an escape route planned.

STORM SLABS: Tonight into tomorrow 5-10″ of snow is forecast to fall to sea level. The snow that fell yesterday covered a variety of surfaces including a new layer of surface hoar. Friday it will be important to pay attention to how much snow has fallen, how well the new snow is bonding to the old snow surfaces and look for signs of instability. More snow will = thicker storm slab!

CORNICES: There are still large cornices along ridge tops. Give them lots of space as they can break farther back than expected.

GLIDE AVALANCHES: It’s been almost two weeks since our last known glide avalanche, but keep in mind glide cracks are continuing to creep down-hill. As always identify cracks and avoid traveling under their runout. They are unpredictable and can avalanche at any time.

WET LOOSE: If the sun comes out at some point after more snow falls look for small wet loose activity. 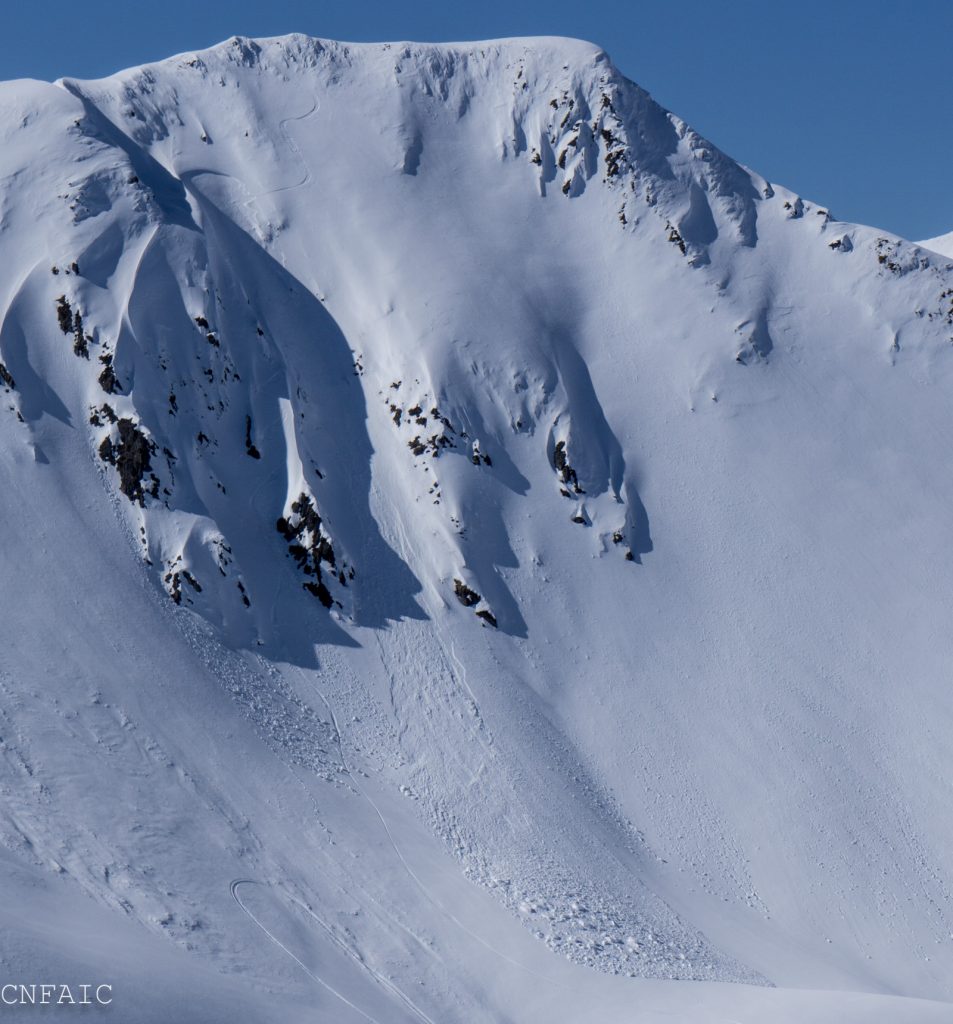 Snowboarder triggered avalanche in Warmup/-1 Bowl that occurred on Sunday. 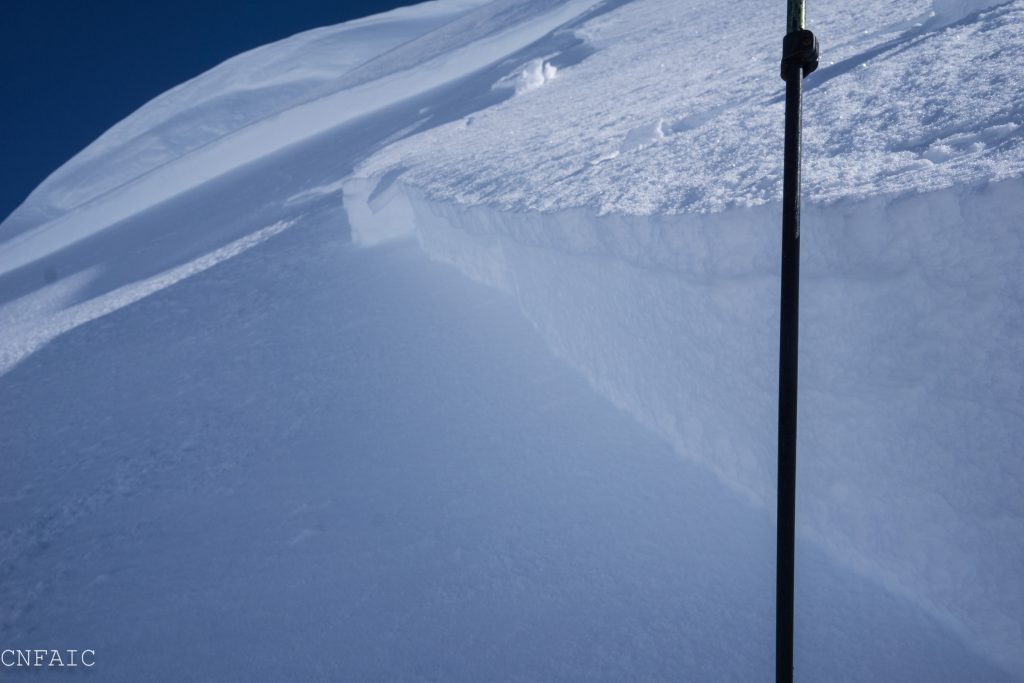 Crown of the avalanche that also occurred over the weekend in Triangle/-2 Bowl. The weak layer was buried surface hoar sitting on a melt-freeze crust.

Yesterday: Skies were mostly cloudy with light rain/snow showers throughout the day. Rain/snowline fluctuated around 1600′. Temperatures were in the mid to high 20Fs at ridgetops and mid to high 30Fs at lower elevations. Winds were easterly 5-15 mph gusting into the 20s. Overnight temperatures dipped into the low 20Fs and 30Fs and winds became light and northerly.

Today: Mostly cloudy skies and light rain/snow showers, 1-2″ of snow throughout the day. Rain/snowline is forecast to be around 1000′. Temperatures are forecast to be in the 20Fs to low 30Fs. Winds will be northerly 5-15 mph with gusts into the 20s. Tonight temperatures will be in the 20Fs. Snow is expected to fall to sea level with 5-10″ overnight into tomorrow. Winds will remain northerly 5-15 mph with gusts into the 20s.

Tomorrow:  Snow continues into tomorrow with another few inches of snow forecast. Winds shift to the east and temperatures stay in the 20Fs. The unsettled and more wintery pattern looks to continue into the weekend.