The avalanche danger is LOW. It is unlikely (not impossible) that a person can trigger an avalanche. Keep an eye out for pockets of unstable snow on upper elevation northerly slopes, isolated wind slabs in the alpine, and increasing likelihood for wet loose avalanches as the snow heats up later in the day. Be mindful of the potential for large cornices to be extra tender during the heat of the day. Keep these issues in mind if you are planning on accessing avalanche terrain, and  don’t slack on the safe travel habits in case an unlikely avalanche catches you by surprise.

SEWARD/LOST LAKE/SNUG HARBOR: It is looking like winds may be a little stronger in these southern zones outside of our advisory area today. It is possible a person will be able to trigger a wind slab avalanche on slopes that have recently gotten loaded.

Raven Headwall: A skier triggered a wind slab avalanche on a high elevation south-facing slope north of Girdwood. The skier was able to self-arrest and was not carried with the avalanche. The avalanche was a foot deep on average, and about 200 feet wide. This is outside of our advisory area, but is indicative of the kind of isolated avalanches that may still be found today. More info in this observation.

Cornice Falls: There were two more cornice falls reported yesterday. One of these occurred on the Pete’s headwall, and the other was up Virgin Creek on Big League. The cornice on Big League failed while a group was hiking along the ridge, and broke 25-30 feet back from the ridge, entraining a large volume of snow as it fell 1500′ below. As one of the group members said in this report, “We were lucky, and everyone is fine, but it was a good reminder that cornices can fail a lot farther back than you’d think.” 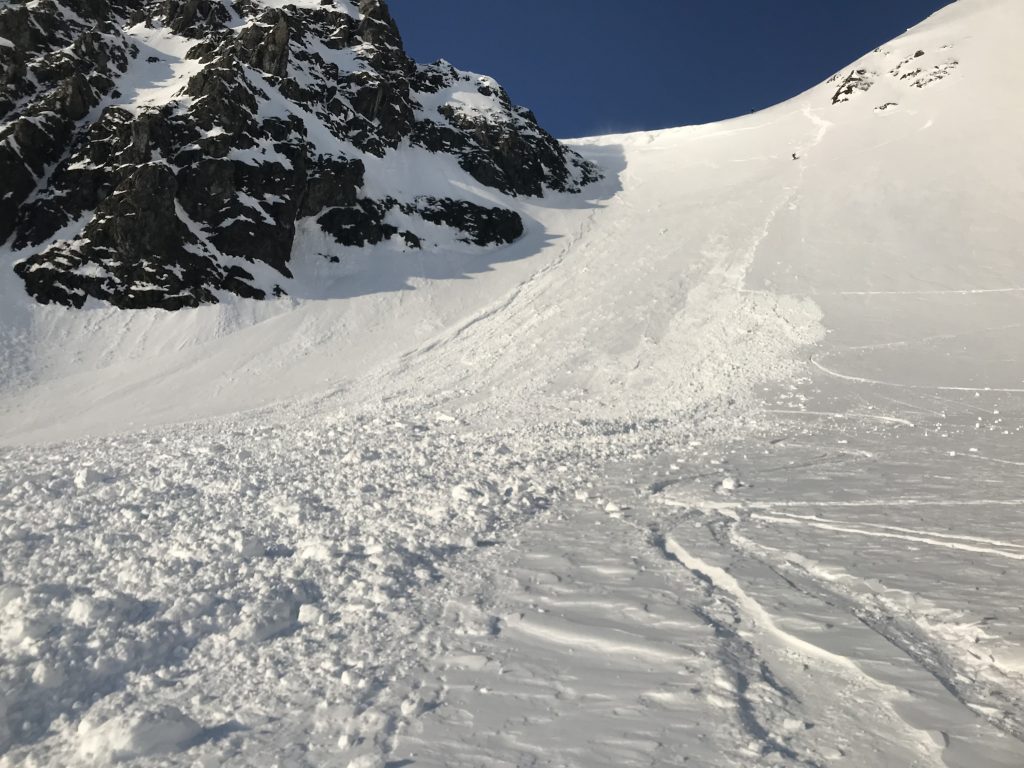 Skier-triggered wind slab avalanche on the Raven Headwall. Avalanches like this are unlikely, but not impossible today. Photo: Erin Larson. 04.10.2022.

Avalanche Problem 1
Normal Caution
Normal Caution means triggering an avalanche is unlikely but not impossible.
Likelihood of Avalanches
Terms such as "unlikely", "likely", and "certain" are used to define the scale, with the chance of triggering or observing avalanches increasing as we move up the scale. For our purposes, "Unlikely" means that few avalanches could be triggered in avalanche terrain and natural avalanches are not expected. "Certain" means that humans will be able to trigger avalanches on many slopes, and natural avalanches are expected.
Size of Avalanches
Avalanche size is defined by the largest potential avalanche, or expected range of sizes related to the problem in question. Assigned size is a qualitative estimate based on the destructive classification system and requires specialists to estimate the harm avalanches may cause to hypothetical objects located in the avalanche track (AAA 2016, CAA 2014). Under this schema, "Small" avalanches are not large enough to bury humans and are relatively harmless unless they carry people over cliffs or through trees or rocks. Moving up the scale, avalanches become "Large" enough to bury, injure, or kill people. "Very Large" avalanches may bury or destroy vehicles or houses, and "Historic" avalanches are massive events capable of altering the landscape.

With another day of quiet weather on tap, it is unlikely to trigger an avalanche today. This doesn’t mean it is impossible. The combination of clear skies and a generally stable snowpack is something we dream of all season long, and as folks start to think about heading into bigger terrain, it is important to keep a few things in mind.

Cornice Fall: We have seen reports of three cornice falls in the past two days, at least one of which was human triggered. Cornices have had all season to get enormous, and they are becoming extra tender as things heat up through the day. These have a bad reputation of catching people off guard by breaking back farther from the edge than people expect. Be sure to give them plenty of space while traveling on ridgelines, and limit time spent under them.

Wet Loose: Expect to see an increasing likelihood of wet loose avalanches as the snow heats up during the day. You will most likely notice rollerballs and pinwheels as a precursor to wet snow activity. If you notice the snow surface becoming wet and sloppy, it’s time to move to shaded aspects. There is a small chance a wet loose avalanche could pull out a small slab failing on the April Fools’ surface.

Shallow Slabs: The snowboard-triggered avalanche on Seattle Headwall (details), and the skier-triggered slab on the Raven Headwall (outside of the advisory, details here) are two reminders of the isolated instabilities that exist despite generally stable conditions. Keep problems like this in mind as you choose the terrain you want to access. Be on the lookout for blowing snow, shooting cracks, and collapsing as indicators of unstable snow. If you notice any of these, it’s best to choose another slope.

Glide Avalanches: Glide cracks are on the move, and it is possible we can see some more glide activity today. These avalanches are large and unpredictable. As always, limit time spent traveling under them.

If you’re getting into steep terrain today, maintain smart travel protocol to minimize the consequences of getting caught by surprise in an unlikely avalanche. Only expose one person at a time to steep terrain, and keep an eye on your partners from safe spots out of the way of avalanche paths. Plan your routes carefully, and have an exit strategy in mind if you do trigger an avalanche. 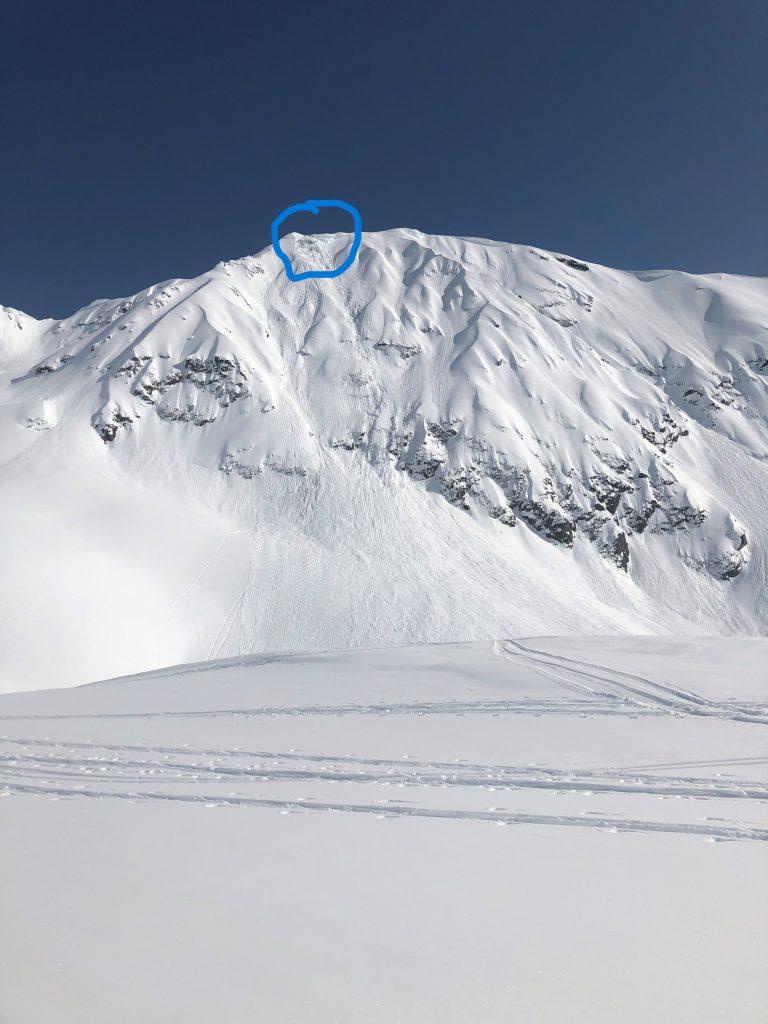 Large cornice fall on Big League yesterday. The cornice broke 25-30′ back from the ridge and entrained a large volume of snow on as it tumbled 1500′ down to the valley. Photo submitted anonymously. 04.10.2022

Yesterday: We had another great of clear skies with light northeasterly winds around 5 mph with gusts of 10-15 mph. High temperatures reached the upper 20’s to low 40’s F after climbing out of the teens F in the morning. Overnight lows dropped back down to the low to mid 20’s F.

Today: Today is looking to be slightly warmer than yesterday, with high temperatures expected to reach the low 30’s to low 40’s F.  Skies are expected to remain clear. Light westerly winds should stay around 5 mph with gusts of 5-10 mph. Overnight lows are expected to drop back down to the upper teens to low 20’s F.

Tomorrow: We are expecting another day of fair weather tomorrow. Skies should remain clear for most of the day, with scattered clouds tomorrow evening. Winds will be light at around 5 mph, with variable directions. It is looking like Girdwood will see more northerly winds, while Turnagain Pass is expected to see more easterly winds.