As of Monday, March 30th, we have suspended backcountry avalanche forecasts for the Turnagain Pass region. Please see the official statement below. The avalanche danger has been LOW for the past two days and triggering an avalanche was unlikely; this trend is expected to continue until mid-week (April 1st) with clear and cool weather in the forecast. Please see our conditions report further below for added snowpack and weather information.

As an organization built upon promoting public safety, the CNFAIC priority at this time is maintaining the health and well-being of our staff and of our communities. Following both Alaska’s Social Distancing and Intrastate Travel mandates are vital. Just as we strive to be informed backcountry partners, now is the time to heed the advice of CDC, State health experts and mandates and stick close to home in a shared effort to slow the spread of this virus.

We understand the draw of the mountains, the need to be outside, to recreate, and to enjoy the Alaskan backcountry during these uncertain times. When recreating, please stay local to your community. Please also consider the effects you may unknowingly have on others, first responders, and SAR professionals.

CNFAIC staff will remain committed to continuing to support our communities and fulfilling our mission as we all work together to minimize the impacts and spread of COVID-19. We will continue to monitor and record weather data and avalanche information, which will still be available at http://www.chugachavalanche.org. Watch for updates on the advisory page and social media channels. Follow us on Facebook @Friends of the Chugach National Forest Avalanche Information Center and on Instagram @chugachavy.

As a reminder, visitors to our National Forests are urged to take the precautions recommended by the Centers for Disease Control and Prevention (CDC). Tips from the CDC on preventing illnesses like the coronavirus can be found HERE.

Thank you everyone for your support, your time, doing your part and for taking a moment to read this statement.

In case you missed it, we encourage you to read a short piece written by a local ER doctor on the front lines of COVID-19. Find that HERE or on the home page of our website.

Thanks to our sponsors!
Mon, March 30th, 2020
Avalanche Problem 1
Normal Caution
Normal Caution means triggering an avalanche is unlikely but not impossible.
More info at Avalanche.org

As of Saturday, March 28th a stout crust was covering the snowpack at almost all aspects and elevations. This crust is still in place and has locked up the snowpack and put a stop to most avalanche issues. Until it gets warm enough to melt the surface crusts, triggering an avalanche will remain unlikely. Hence, that will be the big question moving forward. However, there is one wild card and that is the glide avalanche… 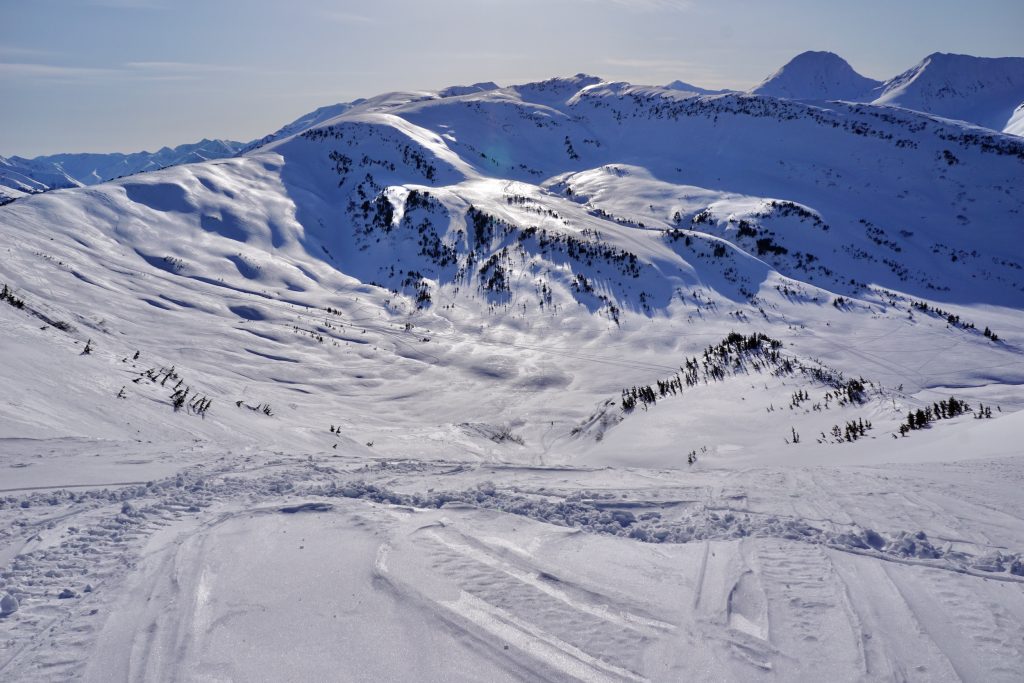 The afternoon sun lights up surface crusts in 1st Bowl (Main Bowl) on the backside of Seattle
Ridge on March 26th. 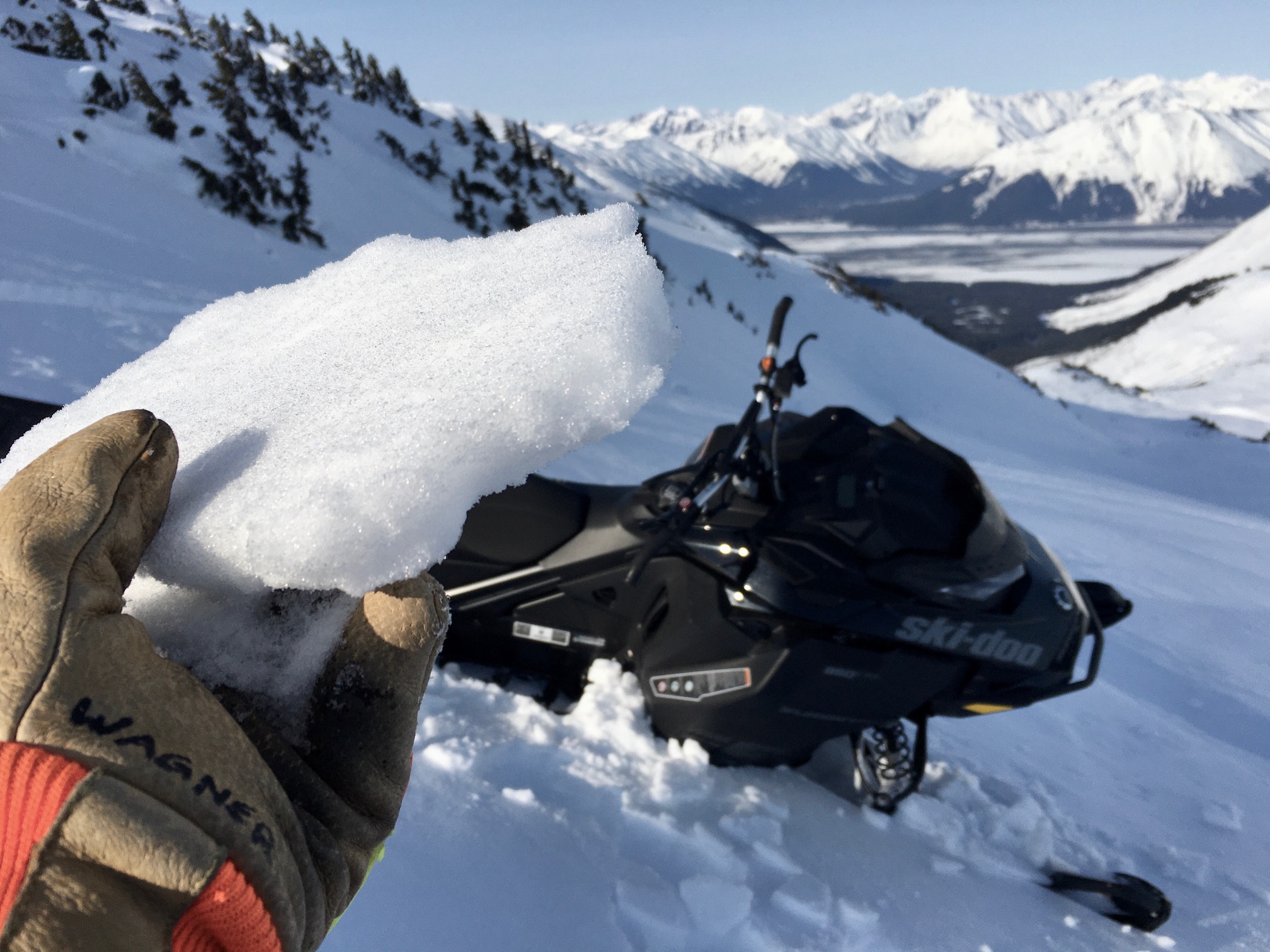 A 1″ melt-freeze surface crust exists at 2,600′ on a north aspect on Seattle Ridge. It only took one warm cloudy day (March 25th) to heat the northerly slopes up enough to melt the surface, which is now why there is a crust on north aspects.

Glide avalanches:  Whether a frozen surface or not, glide avalanches could still pose a problem. This type of avalanche is not associated with human triggers and is completely unpredictable as to if or when it will release. What one can do is watch for glide cracks in the snowpack and limit any exposure under them. There are a few glide cracks beginning to open and several released during the warm day on March 26th.  Don’t mess with the brown frown!

Avalanche Outlook for this week:
Sunny skies with cool temperatures look to remain until Wednesday, April 1st. Solar warming on southerly slopes, combined with light winds, may be enough to soften and melt surface crusts. If the crusts melt and the cohesion is lost, the avalanche danger will rise. Both wet loose and wet slab avalanches will become possible. Watching for this will be the key to avoiding avalanche issues during the beginning of the week.  Later in the week with a chance of rain and snow, paying attention to temperatures and precipitation amounts will be important for assessing avalanche danger. Rain on snow can cause wet avalanches. Where it is cold enough for snow, storm slabs may develop if the new snow adds up to 6″ or more and does not bond well to the existing snow surface. Here is quick rundown on the different avalanche problems:

Wet loose avalanches:  Watch for daytime warming to soften surface crusts on steep southerly slopes. Later in the week, watch for warm cloudy/rainy weather to soften the crusts in the lower elevations. Once the crusts become punchy, wet and saturated, wet sluffs will be easy to trigger. These can run much further than expected on large slopes and entrain a significant amount of snow.

New snow avalanches:  If more than a few inches of snow falls later this week, avalanches related to the new snow will be possible. These could include storm slabs, wind slabs and sluffs. Paying attention to how much new snow falls, if the wind is blowing it into slabs and how well it is bonding to the curst underneath will be key.

For the most up to date weather please see our weather page.

Snowpack temperature: Have you seen the BeadedStream temperature array lately? You can watch the snowpack slowly warm during the springtime. The data takes some digesting, but take a minute to see what’s there. The instrumentation sits at 2,300′ on Tincan and is a 3m (9′) cable with temperatures sensors every 15cm (6″). The cable starts in the ground for ground temperature then extends through the snowpack into the air. Check it out.