The avalanche danger remain MODERATE at all elevations.  Triggering a slab around 1-2′ deep that fails on buried surface hoar is possible, especially in steep wind loaded terrain. Watch for sluffing on steep protected slopes and signs of surface heating on solar aspects. Evaluate snow and terrain carefully.

SUMMIT LAKE to LOST LAKE and SEWARD: South of Turnagain Pass was more impacted by the outflow winds of the past two days. Natural avalanches were observed on Tuesday.  In much of the terrain the snowpack is shallower with buried weak layers of snow. Triggering a large avalanche is possible and extra caution is advised.

Save the date, March 21st! Turngagain Takeover: CNFAIC Avalanche Awareness at the Pass. CNFAIC is hosting an expo style avalanche awareness day for all ages and modes of backcountry travel at the motorized parking lot on Turnagain Pass from 11 am – 5 pm.  This event will be joined by many of our supporting businesses and organizations in our effort to promote avalanche safety. Practice with your rescue gear, grab a hot dog and check out all the cool new equipment on display! Bring your friends and family! Hope to see you all there! Check out the full schedule HERE.

We received a report of a skier triggered avalanche in Palmer Creek yesterday. The crown was 12-18″ deep and was on a wind loaded west facing slope. Observers also reported recent wind triggered avalanches on the Crow Pass trail. 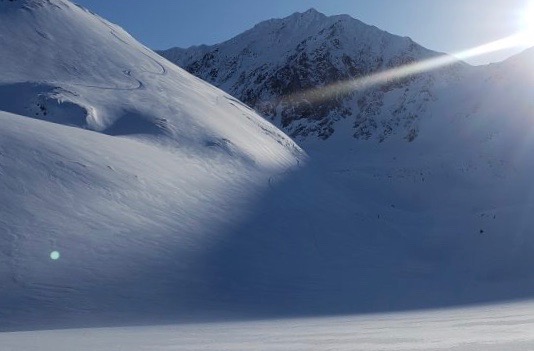 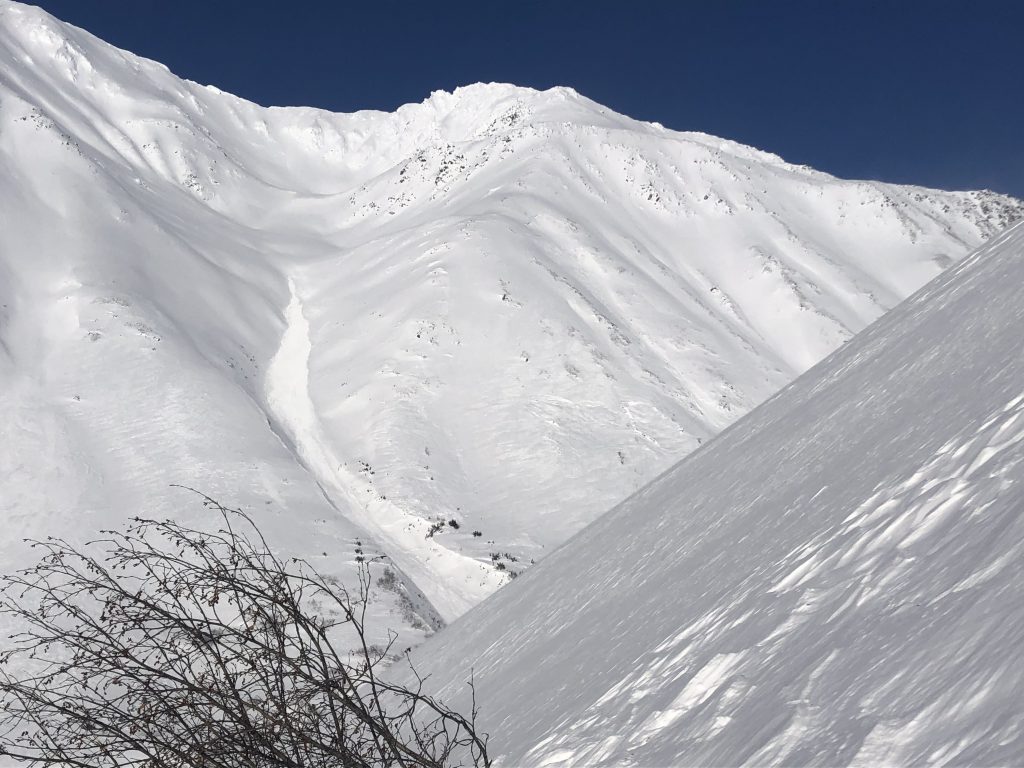 Recent avalanche observed from the Crow Pass trail. Believed to be a natural triggered by the wind on Tuesday. Photo taken 3.11.10 Allen Dahl

Today is an avalanche problem transition day. Since March 2nd wind slab has been Problem #1. We have had a series of northwest outflow events and with a swing or two back to elevated southeast winds. Today the winds are forecast to ease off and become calm. Could you find a lingering wind slab that just involves layers of wind deposited snow not bonding in wind loaded terrain? Yes. However, the main concern is triggering an avalanche that fails on buried surface hoar which is considered a persistent weak layer. This layer was buried around Leap Day and has been found in snow pits around much of the forecast area. It is generally around 1-2′ below the surface. The surface hoar is the suspected weak layer in the Lynx avalanche last Thursday, and some small skier triggered avalanches around Girdwood and potentially the avalanche triggered in Palmer creek yesterday. It is most likely going to be an issue where it is buried under wind affected snow forming a slab. Hence the transition from a wind slab to persistent slab. Additionally, the surface hoar layer may also be reactive as warm temperatures and sunshine change the character of the soft snow into a slab in more protected areas.

A challenge with a surface hoar layer is that it may not be widespread across terrain and may or may not be an issue depending on what the snow below the layer of surface hoar is like. Surface hoar that formed on hard snow or a crust is more of a concern. You could happen to hit a zone with the lurking layer and trigger an avalanche or not!  What does all this mean today? Pay attention to terrain features that look loaded or pillowed, watch for cracking or collapsing, and terrain with hard snow over a softer layer. Use small test slopes and hand pits to see if the snowpack is reactive. Don’t forget this type of avalanche may be triggered remotely. 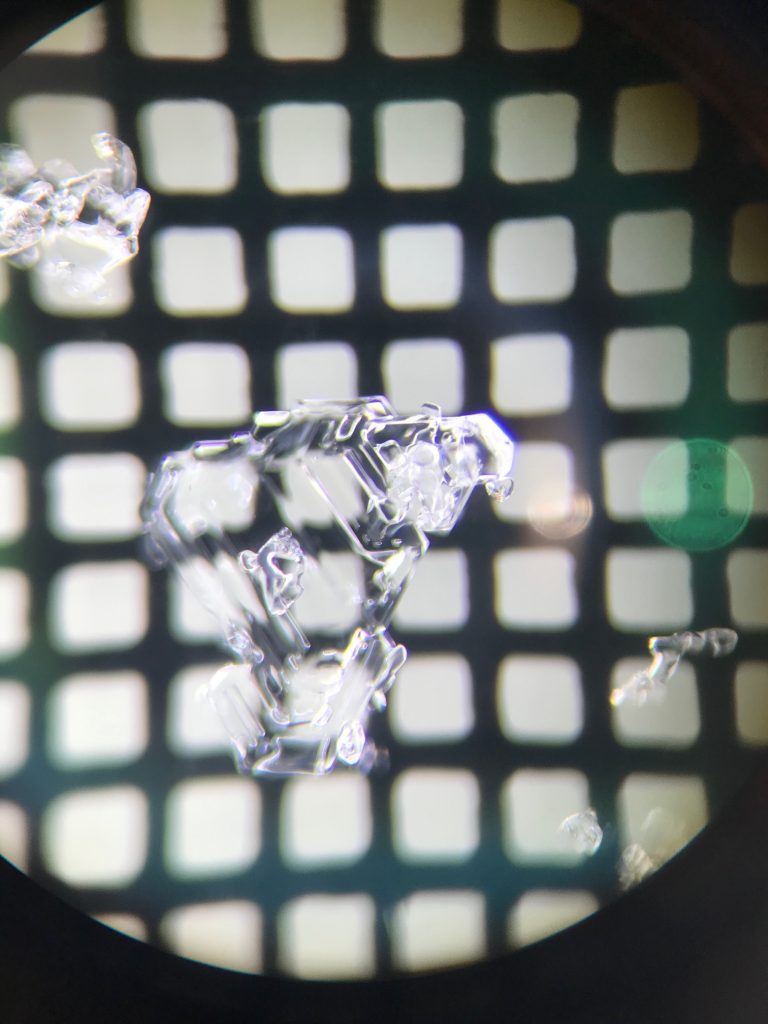 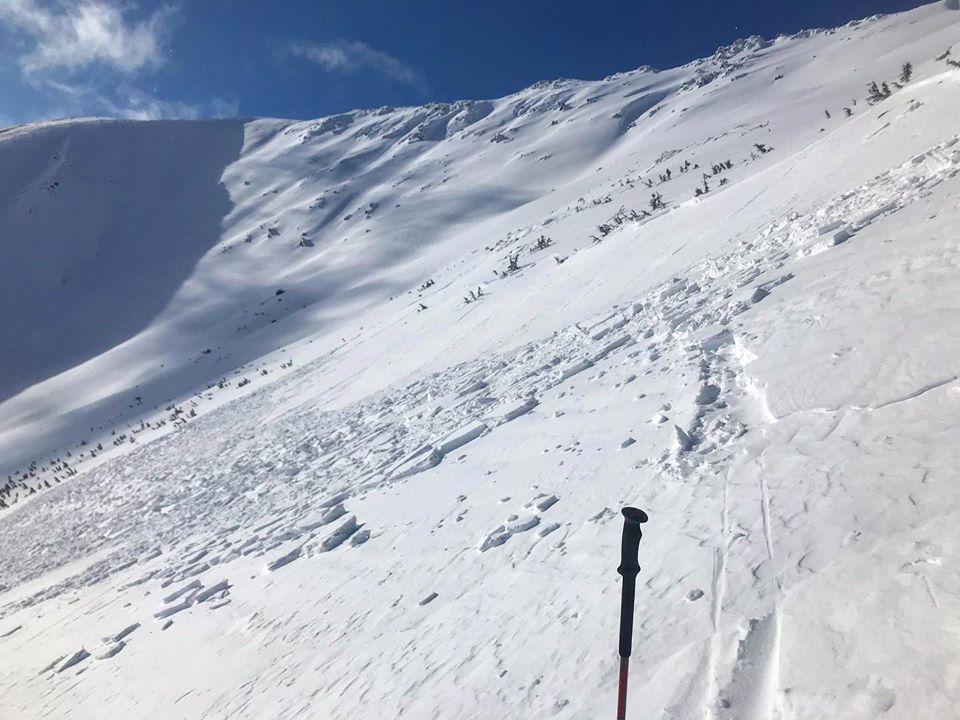 Cornices:  Avoid travel on cornices and limit exposure underneath them.

Loose snow avalanches:  In areas that were protected from the wind, sluffs are possible in steep terrain.

Sun effect: The sun is starting to have an impact on surface snow on steep solar aspects.  Be aware of moist surface snow, small roller balls or loose snow avalanches in wind protected spots, especially below steeper rocky areas. As temperatures warm this weekend, it may also make triggering an avalanche on buried weak layers more of an issue.

Yesterday: Skies were clear and temperatures were in the single digits and low teens at upper elevations and in the teens to upper 20°Fs at low elevations. Winds were westerly 5-15 mph with gusts into the 20s. Winds recorded at the AKRR MP 43 station were 10-25 mph with gusts into the 40s. Overnight skies remained clear and temperatures ranged from the low teens above 0°F to low teens below 0°F. Westerly winds continued to be gusty through the night.

Today: Skies will be clear with temperatures in the low teens to high 20°Fs. Winds will remain westerly and ease off becoming light by the afternoon. Overnight temperatures will be in the single digits and low teens with calm winds.

Tomorrow: Another day of sunshine is on tap with temperatures climbing into the high 20°Fs to low 30°Fs. Winds will be light and westerly. The clear sunny trend continues over the weekend with mostly calm winds and increasing temperatures.