Today’s avalanche danger is MODERATE, and it remains possible to trigger an avalanche on weak layers of snow buried 1-2’ deep. These persistent weak layers can be difficult to manage since they take a long time to heal and will sometimes, not always, give warning signs like shooting cracks and collapsing prior to avalanching. Adjust your terrain use accordingly, and consider the consequences of triggering an avalanche before moving out onto steep slopes.

It is still possible to trigger an avalanche on two different persistent weak layers in the upper 2’ of the snowpack. One is a layer of surface hoar that was buried on 1/28, and the other is a combination of near-surface facets and surface hoar that was buried on 2/9. Both of these layers are slowly becoming more stubborn to trigger, but they are still showing that they are capable of producing avalanches. Most recently, we have seen human-triggered avalanches on these layers in Placer on Friday, and on Notch on Thursday. Yesterday we felt and heard a large collapse while skinning up Shark’s Fin, which was all the information we needed to adjust our plans and seek out lower-angle terrain (more details here).

We have found these layers across our advisory area, and they have shown up at all of our elevation bands. This includes lower elevations, where weak snow sitting on top of a rain crust can be even more sensitive. The tough thing about these layers is that they will not always show clear signs of instability before avalanching. But the recent avalanches, poor stability tests, and red flags that we have seen throughout the area are all indicating that it is still possible to trigger avalanches on these weak layers. With this kind of uncertainty in the snowpack, the only way to minimize your risk is to avoid consequential terrain. If you are trying to get on steeper slopes, consider the consequences of getting caught and carried in an avalanche. Are there cliffs, trees, or rocks below? Would an avalanche run into a gully or an abrupt transition and pile up debris especially deep? Is the slope big enough that getting dragged down it would result in serious injuries or worse? It is tough dealing with these persistent weak layers, but the best way to deal with them is to dial down your terrain choices until the snowpack can gain more strength.

Wind slabs: While today’s light winds are not expected to create widespread wind slab conditions, it might still be possible to find isolated pockets of wind-loaded snow that will be sensitive to human triggers. A stiffer slab of wind-drifted snow at the surface will also make it easier to trigger an avalanche on the persistent weak layers buried just a little bit deeper.

Sluffs: It will be easy to trigger loose snow avalanches (sluffs) on steep terrain that has been sheltered from recent winds. It is unlikely an avalanche like this would be big enough to bury a person, but they can have serious consequences if they carry you into terrain traps like cliffs, rocks, or trees. 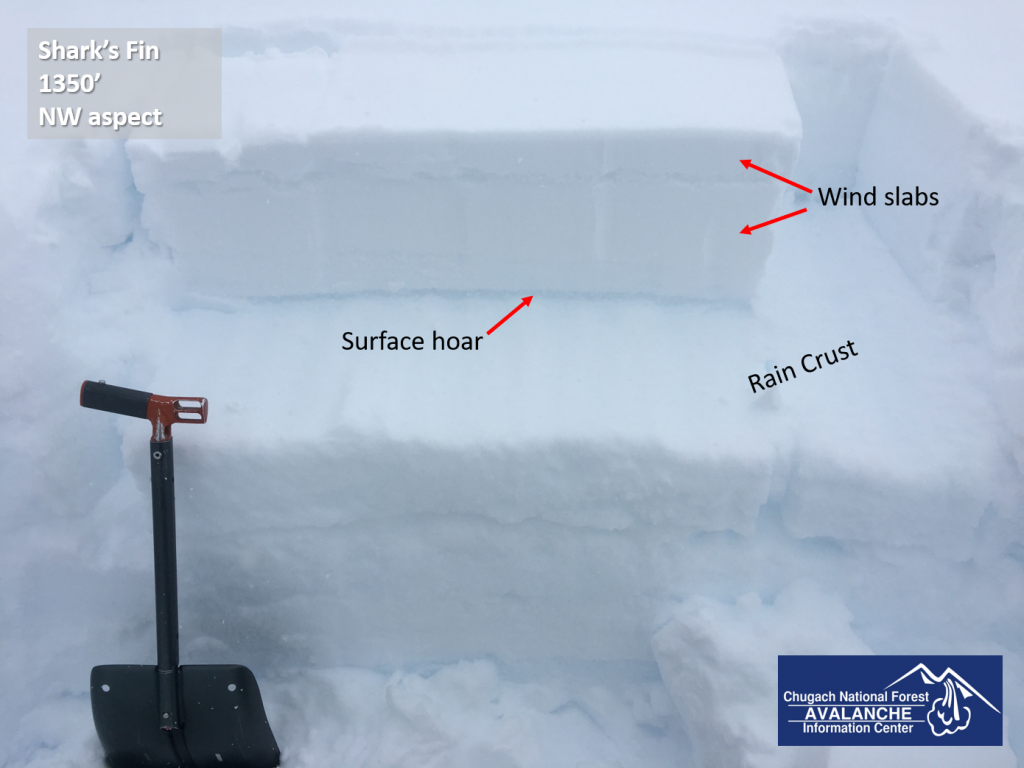 This layer of buried surface hoar on top of a rain crust was giving us poor stability results in snow pits, and also resulted in a large collapse as we were approaching Shark’s Fin yesterday. 02.20.2021 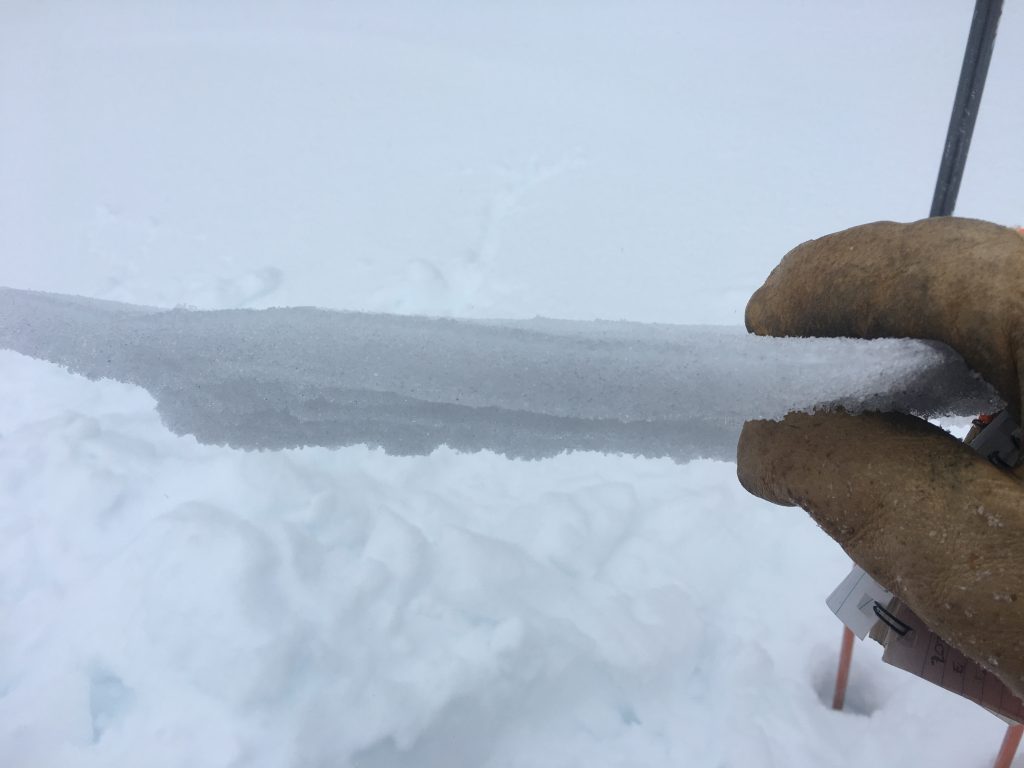 Yesterday: High temperatures reached the low teens to low 20’s F under cloudy skies. Easterly winds were blowing 10-15 mph at the ridgetops for most of the day before calming to 5-10 mph overnight. Light snowfall brought a trace of new snow.

Today: Temperatures are expected to remain cold, with temperatures in the single digits below 0 F to 10 F as of 6:00 a.m. and highs expected in the teens F. Light westerly winds are expected to blow between 5 and 15 mph, with gusts to 20 mph and winds calming during the day. Skies will be mostly cloudy, with visibility improving later in the day. Little or no precipitation is expected today.

Tomorrow: Our cold snap continues tomorrow, with high temperatures expected in the single digits to 10 F under partly cloudy skies. Winds are expected to increase tomorrow, blowing 10-20 mph out of the northwest. No precipitation is expected tomorrow.