The avalanche danger remains MODERATE at elevations above 1,000′. Triggering a slab avalanche 1-2′ deep is still possible on steep slopes that have seen prior wind loading. Stiffer/harder snow over a buried weak layer is causing this lingering avalanche issue. Additionally, give cornices a wide berth, limit time spent under glide cracks and watch your sluff.

SUMMIT LAKE: Be on the lookout for lingering hard wind slabs from the strong NW wind event earlier this week. Another crown was noted on Summit Peak yesterday. It’s unknown if this occurred yesterday; we are currently confirming. Nonetheless, with multiple buried weak layers in the snowpack and stiff wind slabs over them, extra caution is advised.

Small slab triggered by riders above Placer Valley in Squirrel Flats yesterday. Slab was 16″ deep and ran on buried surface hoar. It was 100′ wide and quickly arrested with the lower slope angle. Its movement was described as slow and sluggish. 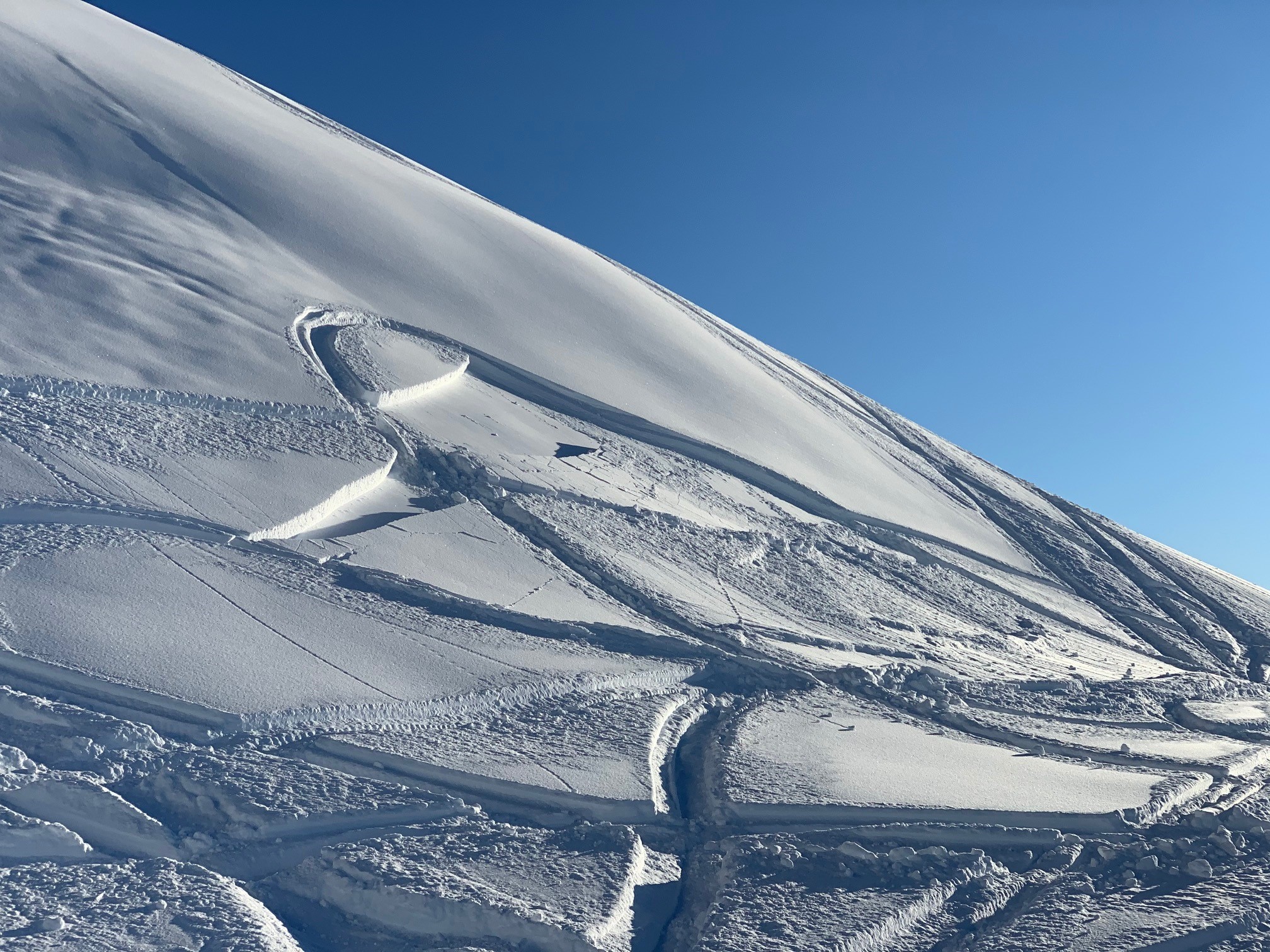 Without much of a change in weather for the daylight hours today, our avalanche issues remain the same as they have been all week, listed below. However, things may take a turn tonight… it’s looking more and more like somewhat of a northwest wind event is developing. Starting around sunset the northwest ridgetop winds are forecast to increase and peak in the 30-35mph range with stronger gusts by early tomorrow morning. If these winds show up early and start moving the plethora of loose surface snow around, be on the lookout for quickly developing new wind slabs.

Back to today. Although a few clouds are streaming in, only light westerly winds are on tap and travel into the Alpine could be easy again. If you are headed out and haven’t been following the forecast the past few days, here are your avalanche issues:

Persistent Slabs: Buried under the last snowfall (from 1/28-1/29) is a layer of surface hoar and near surface facets. The snow on top is variable in depth, only a few inches toward Summit Lake and up to 2′ where winds have loaded it on the north end of Turnagain Pass and Placer Valley for example. Any slope, or portion of a slope, that harbors stiffer wind blown snow over this weak layer is suspect for triggering a slab avalanche. With a couple inches of fresh snow on Tuesday, visual clues may be difficult for sussing out wind loaded zones. Feeling for whumpfing and looking for cracking in the snow around you will be key. Quick hand pits are also a great way to take a look at the top 1-2′ feet and see if you can shear off a block easily. The good news is, slabs are becoming harder to find as top of the snowpack is faceting and becoming looser each day with the cold weather, essentially eroding the slab.

Loose snow avalanches (sluffs): Continue to watch your sluff. These have been high volume and fast running on steep and sustained slopes. There is a lot of very loose and non-cohesive snow out there that is keeping these on our radar. These can cause a lot of grief if they carry us into terrain traps like cliffs, trees, or rocks.

Cornices: Large cornices are peeling away from ridgelines and cracks are opening. Be sure to give cornices plenty of space along the ridge and minimize the amount of time you spend below them. 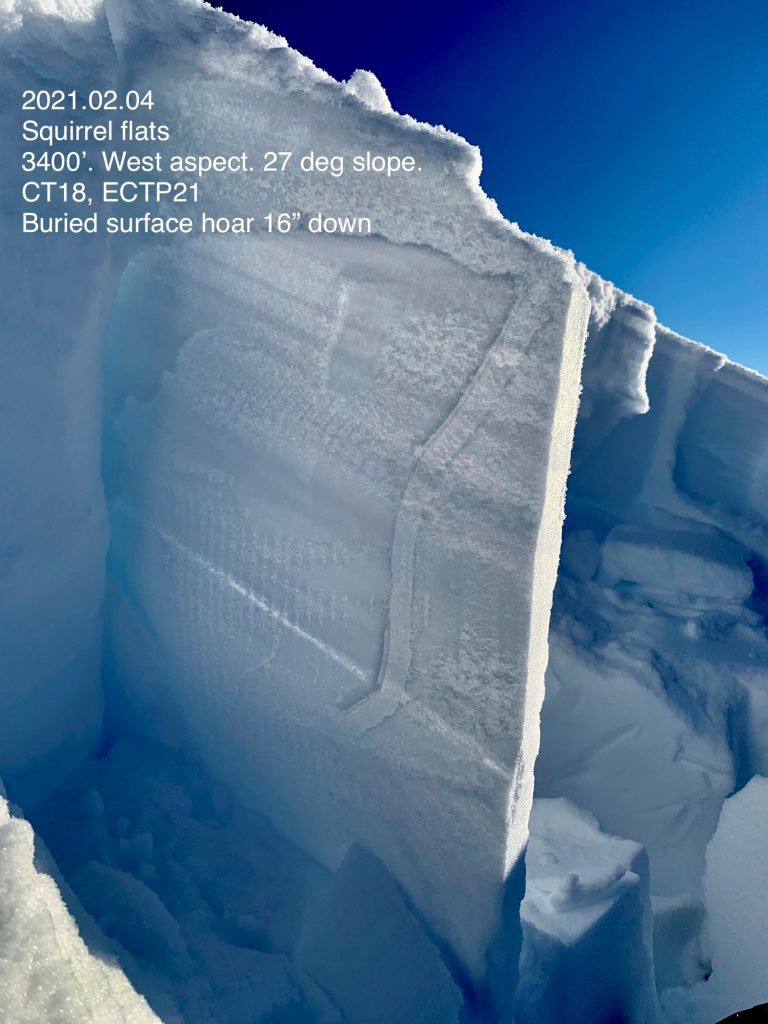 The thin white line… Clearly seen is the the weak layer of buried surface hoar (16″ down in this pit). There is more air than snow in this layer, which is why it shows up so white when backlit and why it fails and collapses easily at times. The notations in the photo can be boiled down to: this layer is still reactive and can produce an avalanche if there is a slab on top, though becoming stubborn to do so. 2.4.21. 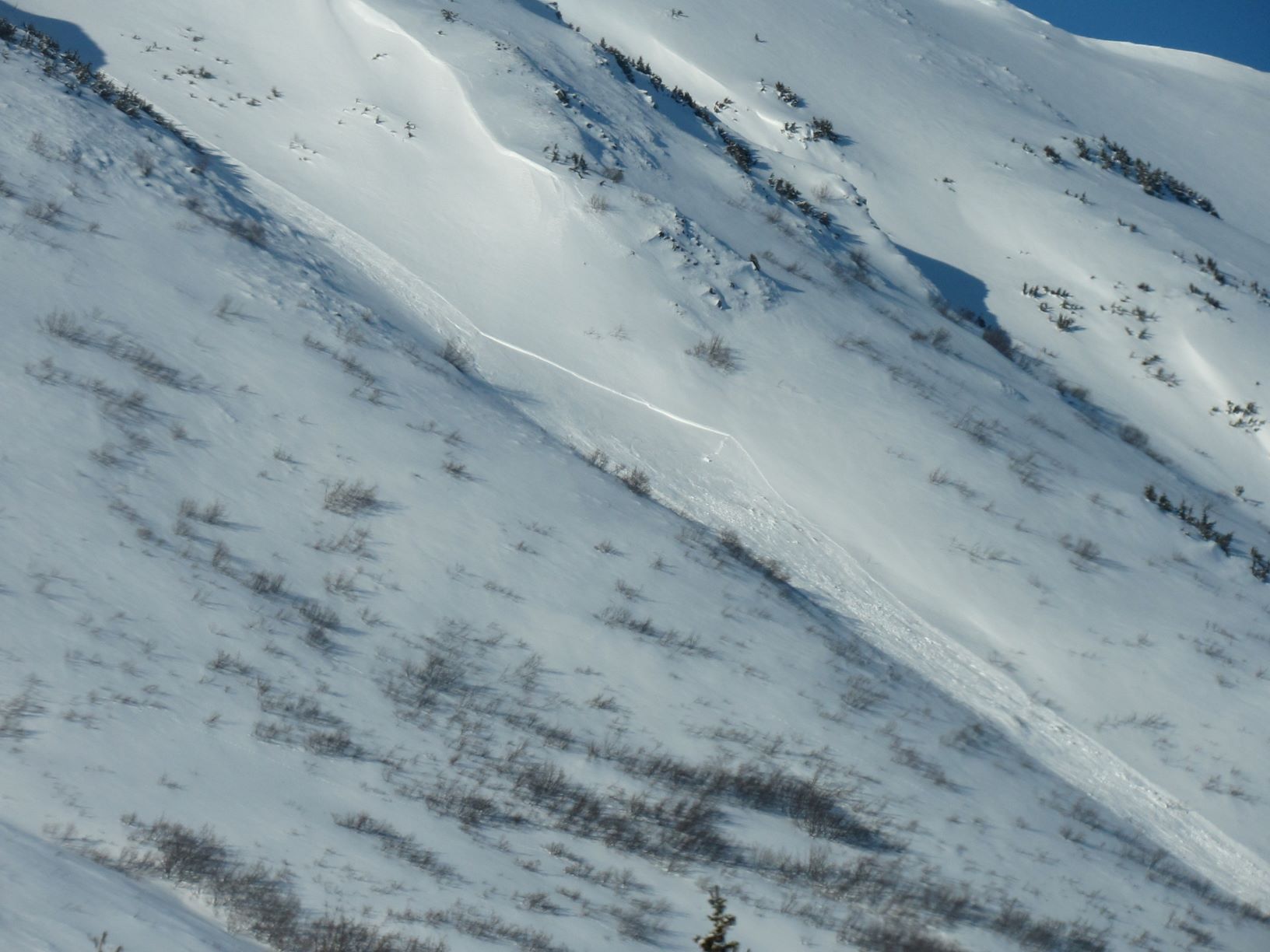 Summit Peak in the Summit Lake area, SE face. Shallow wind slab triggered by what appears to be a sluff from above. We are still determining if this was a natural avalanche that occurred yesterday. No people were in the area that we know of. 2.4.21. Alex McLain.

Glide cracks continue to open up throughout the area. These cracks can release at any time and can be very destructive. Avoid spending time below glide cracks. If you see any new glide activity, please let us know here.

Yesterday: Thick valley fog settled in yesterday, as high as 2,500′ in places, with sunny skies above. Ridgetop winds were light from a westerly direction (5-10mph). Temperatures remained chilly, in the low teens at the mid and upper elevations while sea level hovered near 20F. Overnight, warm air filtered in at the high elevations and the Sunburst weather station has climbed to 24F as of 4am.

Today: Mid-level clouds are forecast to move overhead today with any remaining valley fog dissipating. There is a chance for a flurry or two, no accumulation. Ridgetop winds will remain westerly in the 5-10mph range before shifting to the northwest in the afternoon and pick up to the 25-35mph range by late tonight. Temperatures will rise slightly with the cloud cover: sea level should see upper 20’sF and low 20’sF for the mid and upper elevations.

Tomorrow: Any remaining clouds should be pushed out by the cold northwest winds and mostly sunny skies are forecast. We are keeping a close eye on what these northwest winds might do. As of now, they look to blow in the 25-30mph range with stronger gusts through Saturday, diminishing Sunday. Stay tuned on that. Temperatures will dip back to the single digits with cold air advection in most locations.