A generally LOW avalanche danger exists in the Turnagain Pass region. Remember, LOW danger does not mean NO danger. Loose snow avalanches (sluffs) remain possible to trigger. These could entrain a significant amount of surface snow and run to valley bottoms on steep sustained slopes. Additionally, small wind slabs could be found in steep rocky terrain that have seen recent wind loading.

PORTAGE VALLEY, SUMMIT LAKE, LOST LAKE:  Areas east and south of Turnagain Pass have seen an increase in wind over the past two days. Small to large wind slab avalanches may be possible to find and trigger and Extra Caution is advised in these outlier areas.

Headed to Hatcher Pass? Don’t forget to check the HPAC’s Saturday avalanche forecast at hpavalanche.org and their Facebook page!

Avalanche Problem 1
Dry Loose
Dry Loose avalanches are the release of dry unconsolidated snow and typically occur within layers of soft snow near the surface of the snowpack. These avalanches start at a point and entrain snow as they move downhill, forming a fan-shaped avalanche. Other names for loose-dry avalanches include point-release avalanches or sluffs.
Likelihood of Avalanches
Terms such as "unlikely", "likely", and "certain" are used to define the scale, with the chance of triggering or observing avalanches increasing as we move up the scale. For our purposes, "Unlikely" means that few avalanches could be triggered in avalanche terrain and natural avalanches are not expected. "Certain" means that humans will be able to trigger avalanches on many slopes, and natural avalanches are expected.
Size of Avalanches
Avalanche size is defined by the largest potential avalanche, or expected range of sizes related to the problem in question. Assigned size is a qualitative estimate based on the destructive classification system and requires specialists to estimate the harm avalanches may cause to hypothetical objects located in the avalanche track (AAA 2016, CAA 2014). Under this schema, "Small" avalanches are not large enough to bury humans and are relatively harmless unless they carry people over cliffs or through trees or rocks. Moving up the scale, avalanches become "Large" enough to bury, injure, or kill people. "Very Large" avalanches may bury or destroy vehicles or houses, and "Historic" avalanches are massive events capable of altering the landscape.

With partly cloudy skies expected again today along with light northwest winds and very cold temperatures, the snowpack continues to stabilize. During this process, the surface is becoming weaker and weaker by the day as that fluffy snow from Monday turns into faceted ‘recycled powder‘. This greatly reduces any chance for a slab avalanche, but in turn increases the volume and speed of loose snow sluffs. We’ve had a few folks report sluffs that are gaining volume, taking the top layer of snow and running all the way to the bottom of the slope. Although very unlikely, the weight of a large sluff could overload an old stubborn wind slab from early January hidden under Monday’s snow- creating a larger avalanche. In general, If headed to the steeps, don’t underestimate the sluff. This is a very predictable issue and one that falls in the Normal Caution regime of low avalanche danger. The other issue that is on our minds are the northwest winds.

Wind Slab avalanches:  The northwest outflow winds over Southcentral Alaska have been ushering down Cook Inlet and for the most part, have spared the Turnagain Pass area. With such loose snow on the surface, it won’t take much wind to create a hair-trigger wind slab. With that said, keep a close eye out for areas with any wind effect and slopes with wind loading. Feel for stiffer snow over softer snow and look for smooth pillowed drifts. This issue is mainly outside of our forecast zone, but as wind can do weird things, we need to be on the lookout for wind effect in any area we travel.

Locations suspect for wind slabs:  Summit Lake, Johnson Pass, Bench Peak and all the way south to Seward. The Seward area saw significant wind over the past two days with some natural avalanche activity. Portage Valley and the Whittier areas. North of Girdwood in the Crow Pass region.

The animation below from windy.com shows the general forecast wind pattern along ridgetops, around 5,000′ in elevation. Blue is light wind and orange/red is strong (color legend is on the bottom of the image). Note: weather model data is useful for a general pattern and not always accurate for a specific point. It also becomes less accurate the further out in time.

Cornices and Glide Cracks
:  As always, limit exposure under glide cracks and give cornices a wide margin. 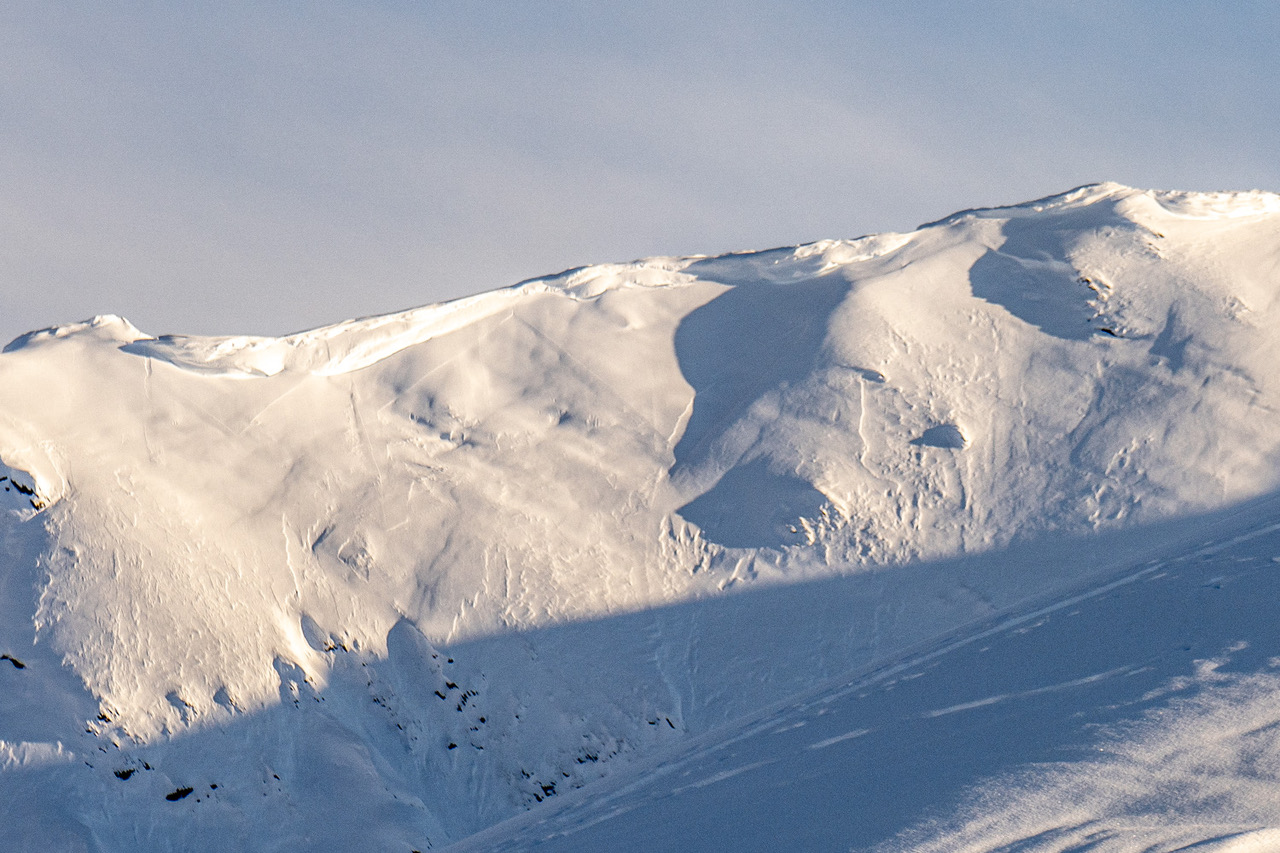 Yesterday:  Mostly sunny skies were over the area. Ridgetop winds were generally light from the northwest in most areas with some moderate gusts in the Bench Peak area south of Turnagain Pass. Temperatures were in the -5 to 5°F at all elevations.

Today:  Partly sunny skies are expected today as cold northerly winds continue to send cold Arctic air over the region. A low-pressure spinning in the Gulf will occasionally send patches of clouds over the Eastern Turnagain Arm zone. Ridgetop winds are expected to remain light (5-10mph) with some stronger gusts from the north and west. Temperatures will stay chilly and hover in the -5 to 5°F at all elevations.