The avalanche danger is CONSIDERABLE above 2500′ where wind loading and new snow are creating fresh wind slabs. Human triggered avalanches are likely and natural avalanches are possible on slopes being actively wind loaded. Watch for active loading, signs of recent wind transport on the snow surface, and pillowy features on leeward slopes to identify wind slabs. Careful evaluation of how reactive wind slabs are using small test slopes is recommended before entering into avalanche terrain.

Below 2500′ the avalanche danger is MODERATE. The 6-10″ of new moist snow that fell yesterday and will continue to fall today is bonding quickly to the old snow surface thanks to the warm temperatures but could still produce human triggered avalanches in areas with recent wind loading.  Below 2000′ wet loose avalanches are likely as precipitation continues to fall as rain today.

Recent Avalanches
Avalanche Problem 1
Wind Slabs
Wind Slab avalanches are the release of a cohesive layer of snow (a slab) formed by the wind. Wind typically transports snow from the upwind sides of terrain features and deposits snow on the downwind side. Wind slabs are often smooth and rounded and sometimes sound hollow, and can range from soft to hard. Wind slabs that form over a persistent weak layer (surface hoar, depth hoar, or near-surface facets) may be termed Persistent Slabs or may develop into Persistent Slabs.
Likelihood of Avalanches
Terms such as "unlikely", "likely", and "certain" are used to define the scale, with the chance of triggering or observing avalanches increasing as we move up the scale. For our purposes, "Unlikely" means that few avalanches could be triggered in avalanche terrain and natural avalanches are not expected. "Certain" means that humans will be able to trigger avalanches on many slopes, and natural avalanches are expected.
Size of Avalanches
Avalanche size is defined by the largest potential avalanche, or expected range of sizes related to the problem in question. Assigned size is a qualitative estimate based on the destructive classification system and requires specialists to estimate the harm avalanches may cause to hypothetical objects located in the avalanche track (AAA 2016, CAA 2014). Under this schema, "Small" avalanches are not large enough to bury humans and are relatively harmless unless they carry people over cliffs or through trees or rocks. Moving up the scale, avalanches become "Large" enough to bury, injure, or kill people. "Very Large" avalanches may bury or destroy vehicles or houses, and "Historic" avalanches are massive events capable of altering the landscape.

The barrage of warm and wet weather continues today with light precipitation expected throughout the day and above freezing temperatures up to about 2000′. Yesterday, Turnagain Pass escaped from the worst of the rain and had surprisingly good weather (albeit warm) for the better part of the day. At the road elevation about 6″ of fresh moist snow fell in the early morning hours increasing to about 10″ at higher elevations where the snow was drier. In more coastal areas of the forecast zone, like Portage and Placer, rain fell throughout the day up to about 2000′. Strong winds accompanied the precipitation and was actively transporting snow at upper elevations creating fresh wind slabs which are likely for a skier or rider to trigger today, especially at higher elevations where the winds were stronger and the snow was drier.

Thanks to the warm temperatures the new snow seemed to be bonding to the existing snow surface quite quickly, but we were able to trigger shooting cracks on steep wind loaded features near treeline. We recommend watching for signs of active wind loading today to identify areas with touchy wind slabs and using test slopes to determine how reactive the wind slabs are before entering into consequential terrain. With a lot of snow available for transport yesterday there are probably some large wind slabs lurking in the upper elevations. Marginal visibility could make it difficult to see the slopes above you today but it is safe to assume that upper elevation start zones will continue to be loaded as precipitation and moderate winds continue throughout the day.

Overall, we have seen mostly right side up and stable snowpack structure recently but a surprising human triggered avalanche on Tincan Proper on Thursday is a good reminder that it is still possible to trigger an avalanche on a deeper layer of facets above the New Years Crust (see ob here). This avalanche was 2-5′ deep and propagated across a ridgeline in very consequential terrain. Luckily everyone was okay, and this near miss was an opportunity for us to reevaluate where the facets over the New Years crust are most likely to be triggered. Our best estimate is that the New Years crust is more supportable at higher elevations which provides a cleaner bed surface for avalanches to run in the facets above the crust. It will be easier to initiate an avalanche on this layer in areas with a thinner depth to the weak layer, so we suggest that you take time to evaluate the snowpack structure at upper elevations before entering avalanche terrain.

Cornices: All the recent wind transport also means that cornices were building and could be sensitive to human triggers today. They often break further back than expected, so give a wide berth when travelling along corniced ridgelines.

Loose Wet Avalanches: With rain falling up to 2000′ it is likely that wet loose avalanches are releasing in steeper terrain, especially in more coastal areas that saw higher amounts of rain on snow yesterday. This type of avalanche often has more force behind it than you might expect so be aware of the potential for a wet loose avalanche to push you downhill if you are on steep slopes in an area with a water saturated snow surface. 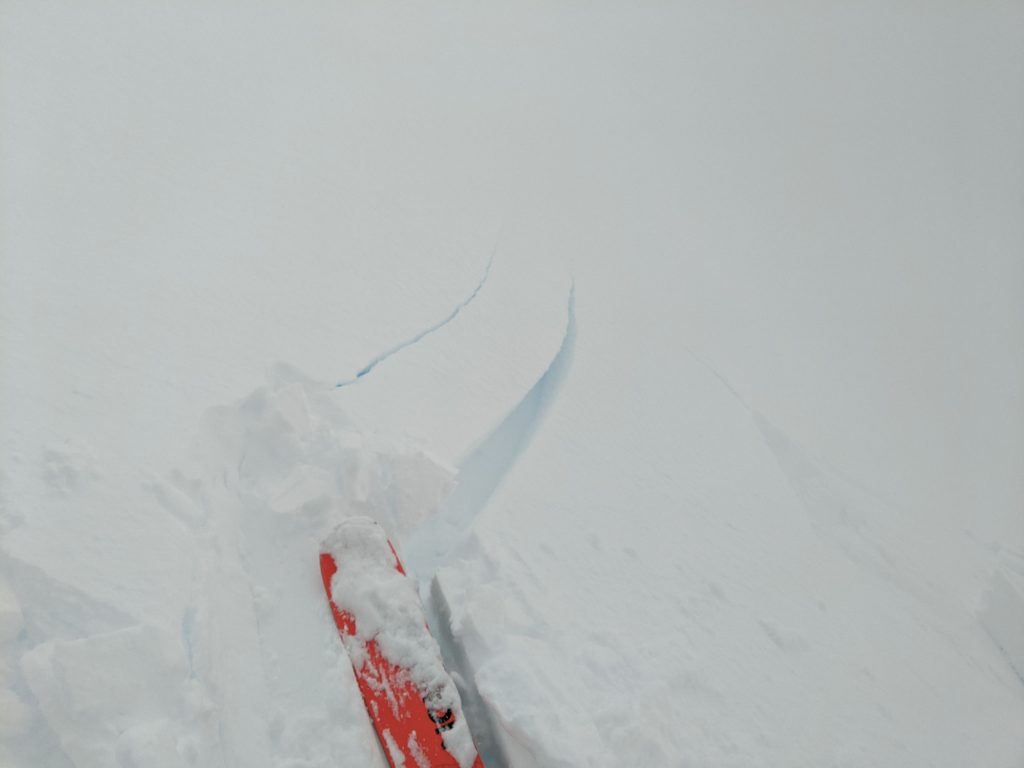 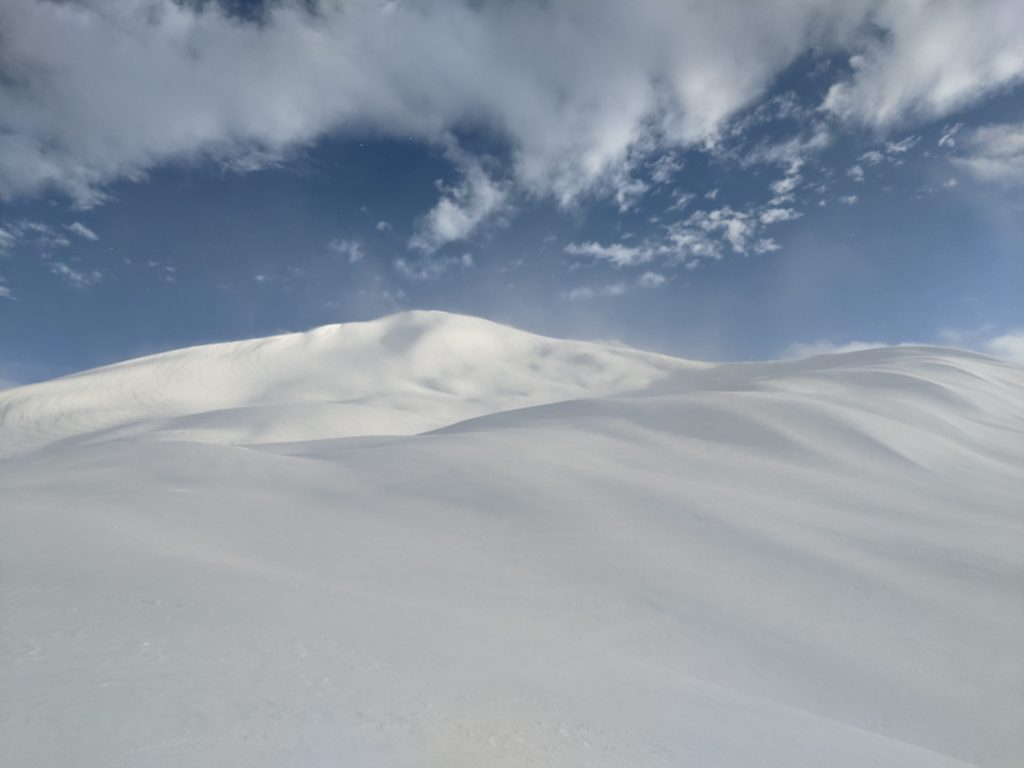 Active wind loading along all upper ridgelines throughout the day yesterday in Turnagain Pass. Photo 1.21.22

Yesterday: Above freezing temperatures up to about 2000′ across the area with rain and wet snow. The rain was mostly concentrated near the coast (Portage, Placer, Seward) and areas inland were largely spared from the worst of it. About 6″ of moist snow at the road elevation in Turnagain with up to 10″ as the snow became drier at higher elevations. Winds stayed strong for most of the day with averages around 40 to 50 mph until 10 am and then dropping down to 30 mph until 10 pm on Sunburst.

Today: Another day of above freezing temperatures up to about 2000′ and light precipitation throughout the day. Total precipitation should be around 0.2″ water with snow line around 2000′. Areas closer to the coast will see much higher precipitation totals today, similar to yesterday. Winds will remain moderate in the 15 to 30 mph range and gusts to 50 mph. Visibility looks poor today, but yesterday Turnagain was in a blue hole for a good portion of the afternoon, so maybe we will get lucky again.