Date
Sun, April 24th, 2022
Activity
Snowmachine
Fatalities
0
Summary
A large natural glide avalanche occurred on a sunny Sunday afternoon in an area that sees high backcountry use. Four snowmachiners were in the path at the time of the release. Two riders were able to escape and two were caught in the moving debris. One rider was fully buried with only the back of their helmet and one hand exposed while the other rider was not buried. The buried rider was located within minutes and rescued by the group.
Accident Report

Around 5pm on Sunday, April 24th four snowmachiners were descending the Seattle Ridge common motorized up-track during a day of speed riding. This is a high-traffic route, extending from the bottom of Seattle Ridge (1,000’) to the top of the ridge (2,700’). It can see hundreds of riders pass up and down it on sunny weekends. On the descent the riders were spaced out between 100 and 300 feet apart. When they were roughly half way down the slope a glide crack around 500’ wide released into an avalanche above them. The glide avalanche initiated a large wet slab release on the looker’s right flank, increasing the overall size of the slide. The instant the riders saw the avalanche, they accelerated down and to their left in order to outrun the dense and wet debris.

The riders in the front and rear were able to escape out of the path and were not caught. The third rider in the group was overtaken by the debris on the looker’s right flank and was thrown from their machine. This rider came to rest on top of the debris near the edge uninjured. The second rider, who was directly under the glide crack, saw the early stages of the slope breaking over their shoulder and accelerated down the slope. Upon looking back a moment later, the rider realized the debris was moving too fast to outrun and they quickly headed left to get as much to the side as possible. The debris caught the second rider at the same time they hit a horizontal depression. The rider was thrown from their machine and subsequently pushed by the debris back into the machine and over the rider. The rider believed to be completely buried with one hand near the front of their helmet. They were able to use that hand to clear a small air space and it was close enough the surface to punch through. The rider was able to breath shallow breaths and yell for help. Despite one had free, the rider explained later they were so encased in snow they could not move their head and would not have been able to extricate themselves.

The first rider was able to turn around once they were out of the path and begin searching for the other riders. They quickly met up with the rider in the rear near the edge of the debris and had voice communication that the third rider was OK and digging out their machine. Soon after the two riders turned their machines off they heard the second rider yelling for help. The second rider was between 70-90 feet above them out of sight in the depression. Once the two riders ascended to the depression they could see portions of the second riders machine and the back of the riders helmet. They were able to quickly free the rider’s head and then body. It is estimated the second rider was buried for 2-3 minutes before being found. The second rider never lost consciousness however did sustain a back injury. Riders utilized radios to confirm that everyone else in their group was accounted for and safe.

Of note. Upon the glide crack releasing, the second rider described ‘I felt something that wasn’t right that make me look back’. They did not know if it was the snowpack under them moving or a noise, but something happened that ‘wasn’t right’. The other riders became aware of the avalanche after seeing the moving debris out of the corner of their eyes.

All riders in the group were aware of the glide crack and had been watching it all season. They all had avalanche rescue gear (beacon, shovel, probe) and prior avalanche training. The second rider had an airbag but the handle was stowed in its pocket. This was because the group was speed riding and the rider didn’t want the airbag to accidentally be deployed when in the air. The second rider stated that even if the handle would have exposed, there would not have been a moment to let go of the snowmachine handle bars to pull it. It was clear to the rider the best chance at escaping was simply to get as far away from the debris as possible on their snowmachine.

Three days prior to the avalanche a warm storm began, ending early on the morning of April 24th, the day of the avalanche. The Turnagain Pass SNOTEL, ~2miles SE of the slide at 1880’, recorded 2.5” of precipitation with a rain/snow line beginning around 1,000’ and rising to 2,000’ by the end of the storm. The bulk of the precipitation was on Friday, April 22nd with only 0.5″ of precipitation observed on Saturday, April 23rd. The storm total in snowfall above 2,500’ in elevation was between 1.5 and 2.5’ of dense heavy snow. On the day of the avalanche, skies became mostly sunny with light and variable ridgetop winds. The Seattle Ridge weather station, ~1 mile north of the slide at 2,400’, recorded a high temperature of 40F between 1 and 3pm after a warm overnight low of 30F.

This slope, called Repeat Offender, along with the whole SE face of Seattle Ridge, often sees glide cracks forming during the winter and springtime. This season an unusually large glide crack formed in December (~500’ wide), along with a few other smaller cracks, on the upper section of the Repeat Offender path. It is not uncommon to see sections of these cracks release during the winter or spring. What was uncommon in this avalanche was the whole crack released and triggered a large portion of a wet slab. Glide avalanches are unpredictable and are not triggered by people. However, they are known to become more active in the spring when the snowpack warms and becomes isothermal. During the week before the avalanche several other glide cracks released on Seattle Ridge, though not as large as this one. This avalanche occurred during this time of active glide releases, which was exacerbated by the warm storm just two days before. The storm added both weight and warmth to the snowpack, two factors that can help gravity pull the snowpack down if it’s already close to avalanching. It is also worthy of note that many glide cracks simple melt out and never release. Other than avoiding slopes with known cracks, we can move quickly when under them, watch for a release, and have a solid escape route planned. These are the only ways to manage this type of avalanche. It is very rare for a glide avalanche to catch and bury a person. We are grateful all persons were OK.

We would like to thank the riders involved for sharing their information and photos. 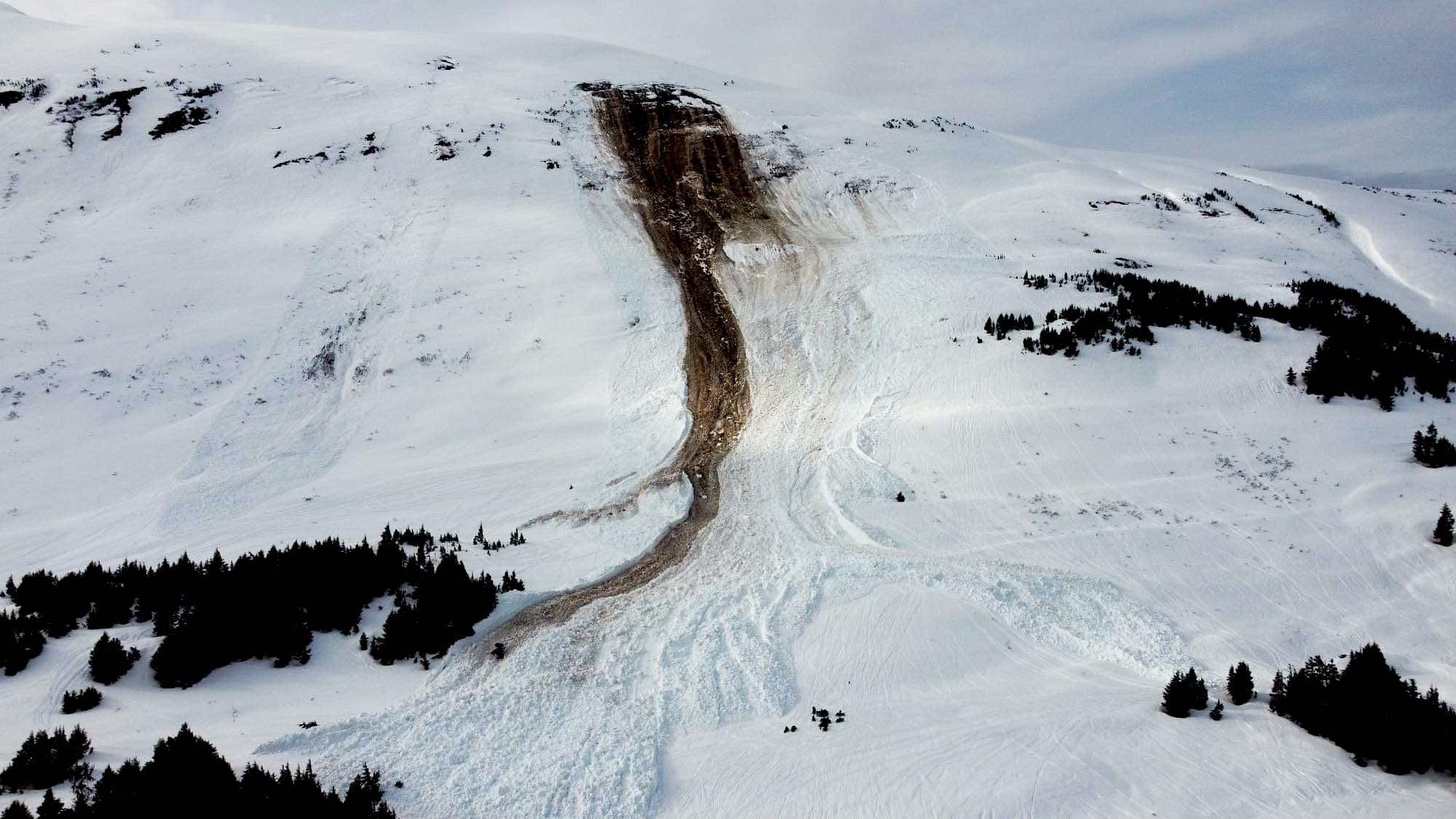 View of avalanche after successful rescue. The group involved along with several other riders grouped up to confirm no other persons were caught. Photo courtesy of Michael Lindeman. 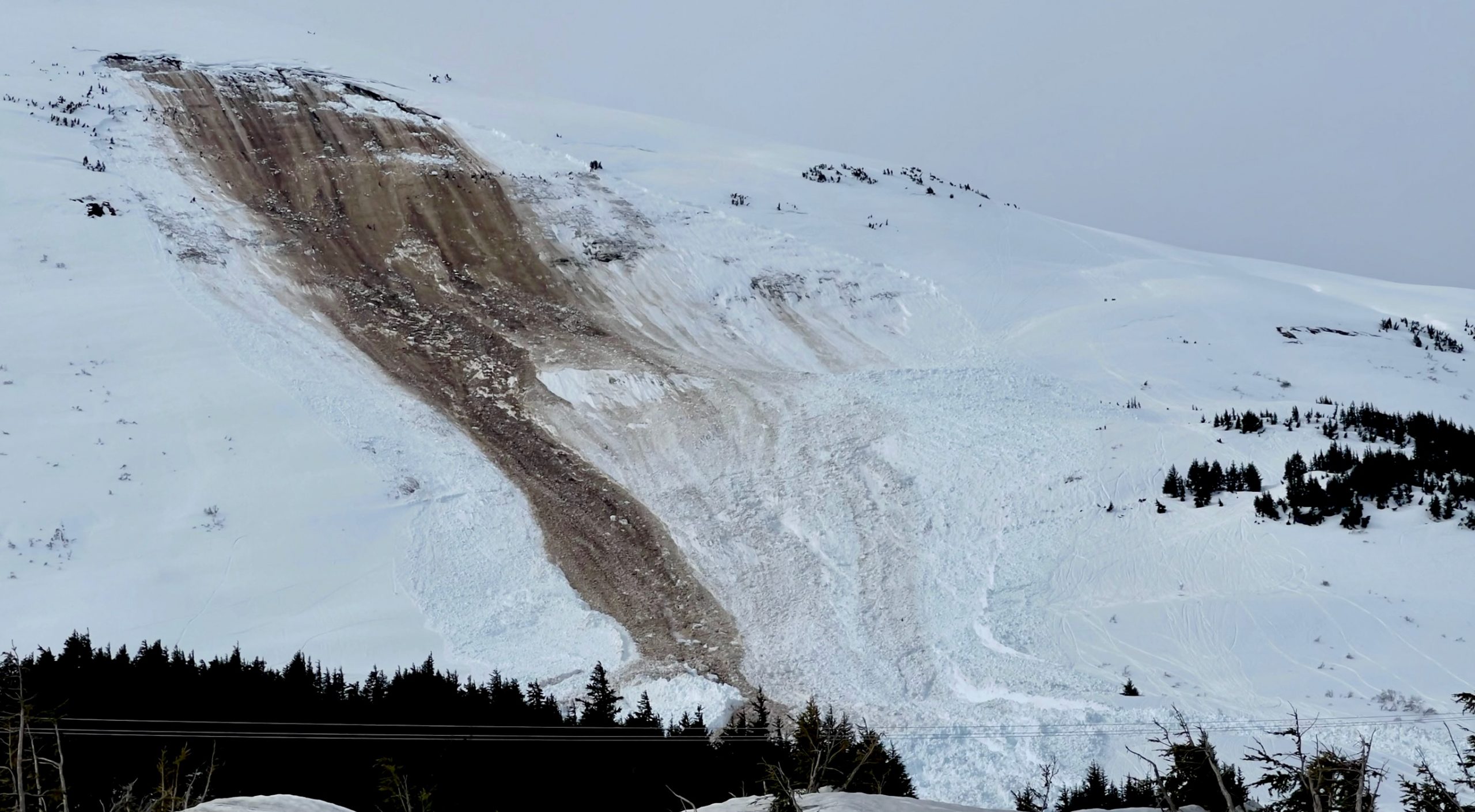 Avalanche seen shortly after release by another group from the Seward Highway. Photo courtesy of Rusty Allen. 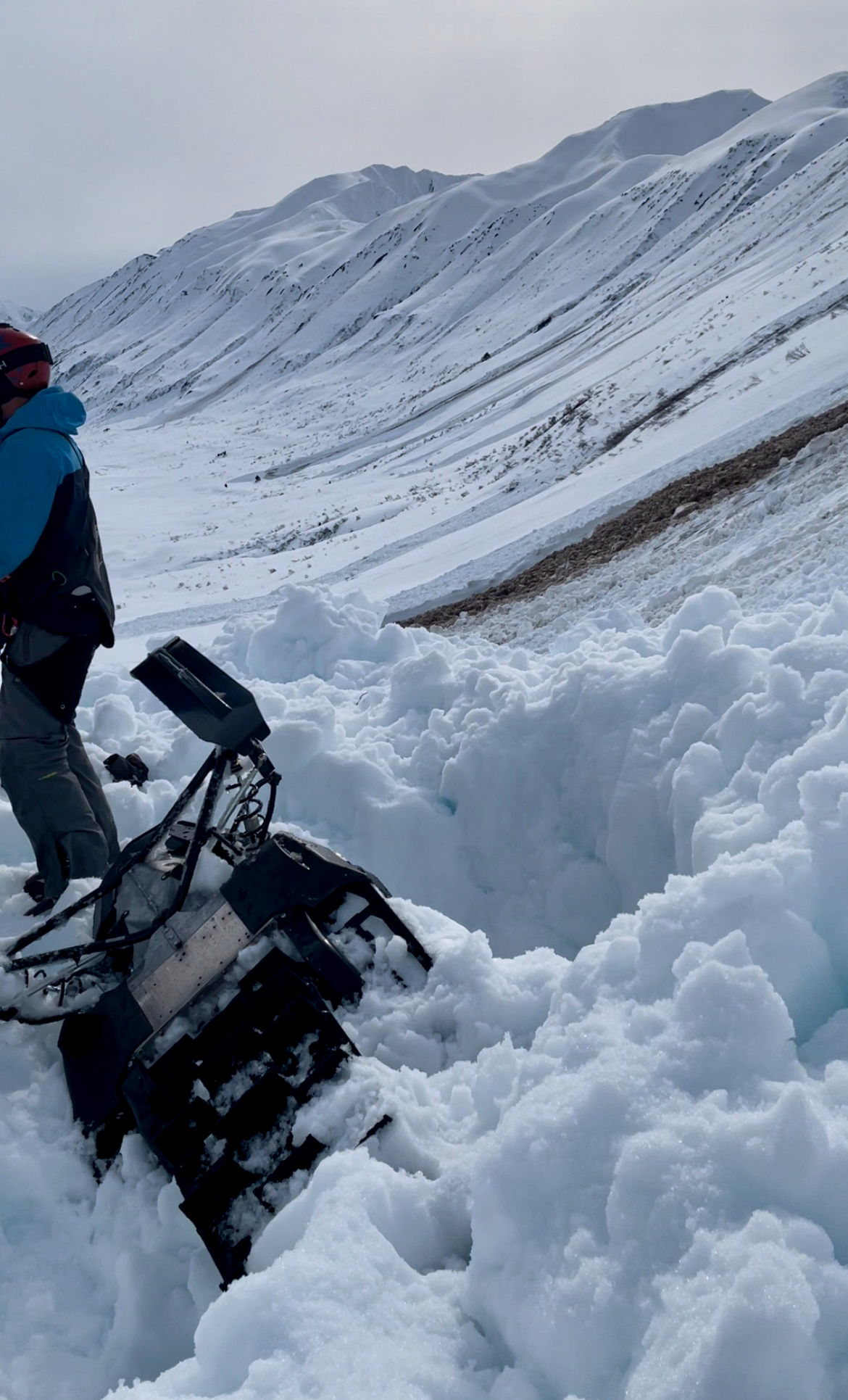 Rider 2's snowmachine partially uncovered with location of Rider 2 after being dug out near snowmachine. Photo from group involved. 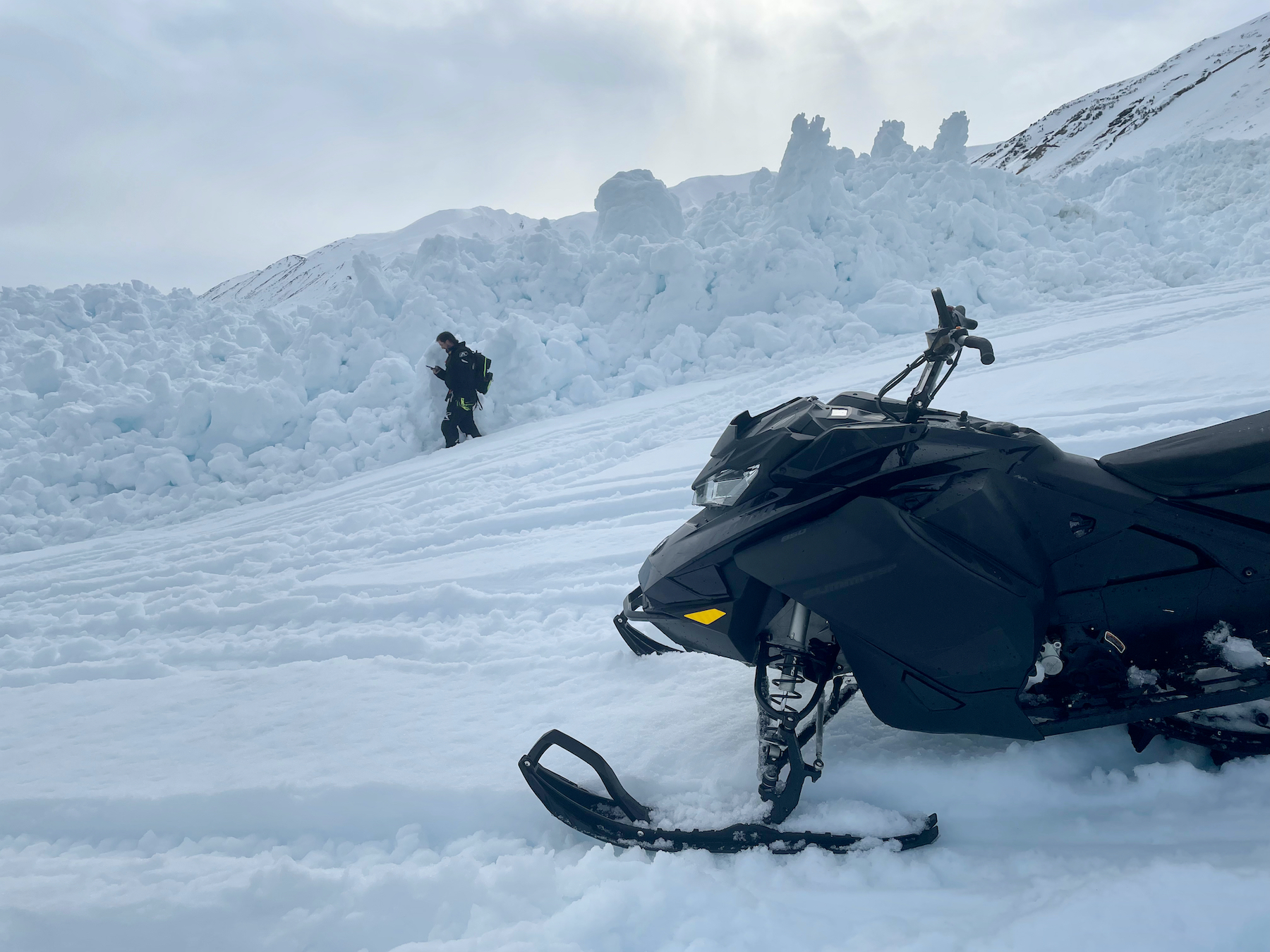 Debris and snowmachine with a rider doing a beacon search for any other possible victims. Photo by the reporting party. 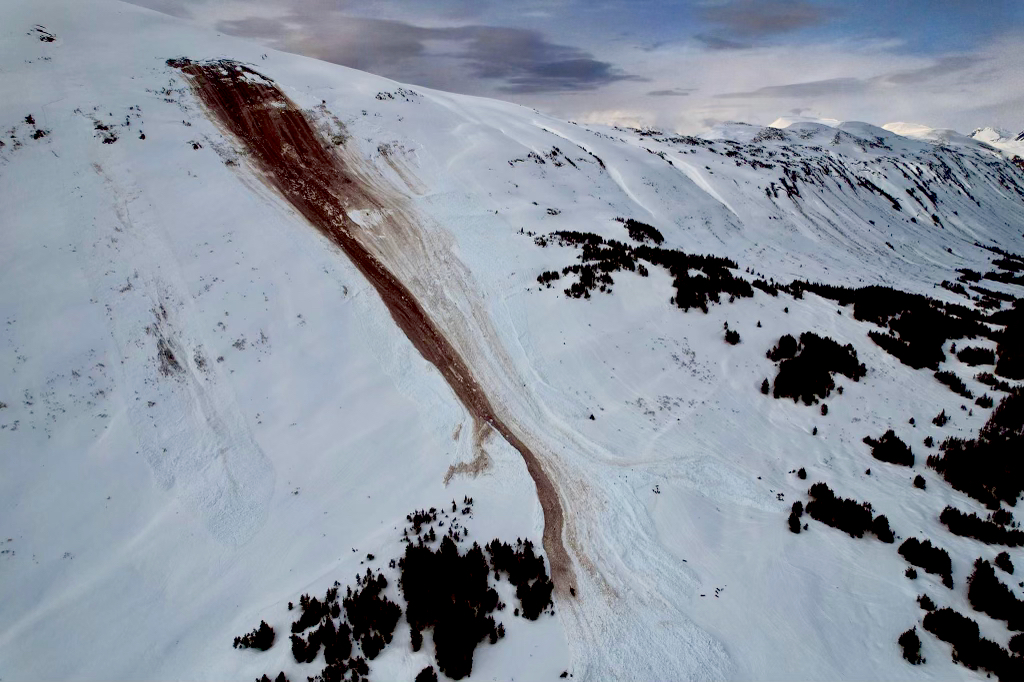 Drone image shortly after avalanche and before hangfire released. Note the riders along different sections of the debris. Photo by Michael Lindeman.

Day after, with original avalanche and the hangfire on the looker's right side that released around 7pm (2 hours later). 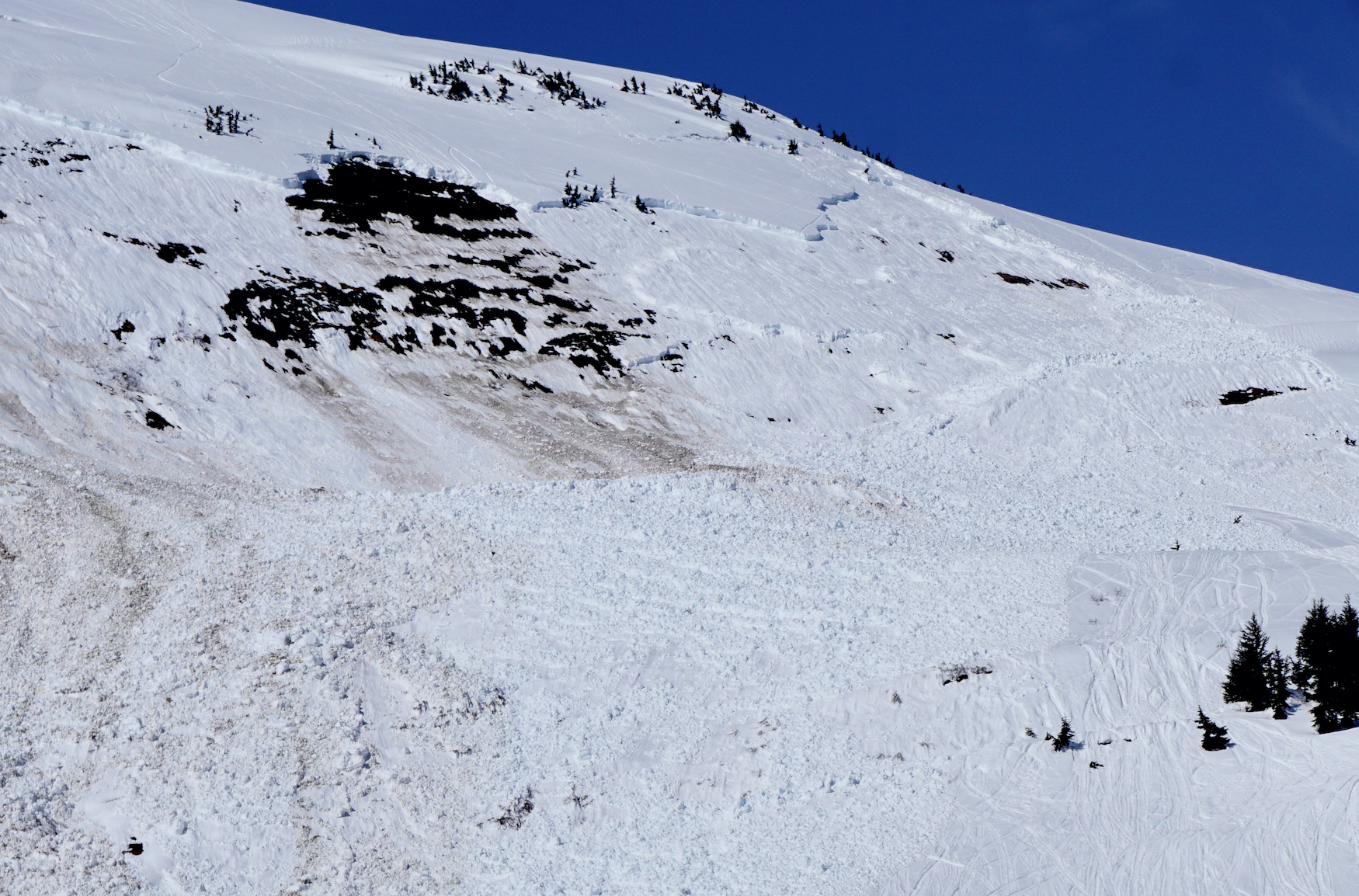 Close up of the hangfire that released around 7pm the same day, 2 hours after the large avalanche. Note the debris covered additional sections of the common up-track.