Tips for Navigating the Backcountry in the Springtime

Managing springtime avalanche problems can be tricky, with conditions often changing from stable to dangerous within a matter of hours. Whether you are planning to eek out the last of the corn skiing in Turnagain Pass, climb Denali, or extend your ski season in one of Alaska’s more remote mountain ranges there are some general considerations for spring skiing that are useful to keep in mind. The most important is to tune yourself into the diurnal cycle of wet snow avalanches. It is also important to remember that we can get significant snow storms any time of year in Alaska if you are at a high enough elevation, so you can’t let your guard down keeping an eye out for red flags and monitoring the snowpack structure in the area you are travelling. Below are some tips for staying safe in avalanche terrain during the transition from winter to summer snowpack. 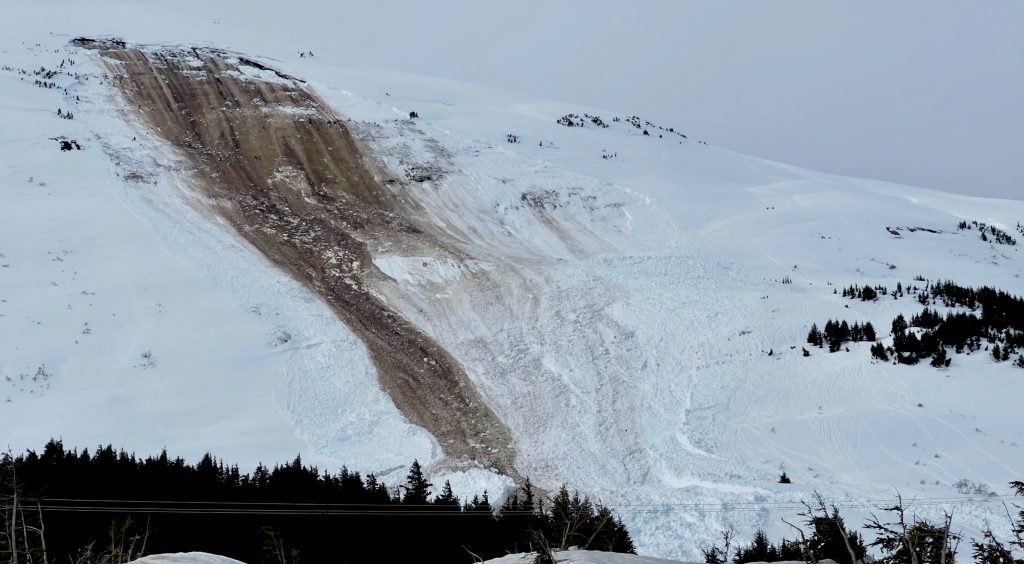 The diurnal cycle of wet snow refers to the pattern of melting and freezing that occurs on a daily basis during clear weather. Colder temperatures and lack of solar input at night allows the surface snow to freeze, forming a strong crust that stabilizes the snowpack and can make for very fast travel conditions. As the sun comes up in the morning it starts melting the surface snow, with east aspects melting first, then south, west, and north respectively. There is a delicate balance of the surface snow being melted enough for good corn skiing but not melted too much to where wet avalanches become a significant risk. The rule of thumb is that if the snow is melted enough to be above your ankle when stepping on the surface with a boot then it is time to move onto the next shadier aspect.

What if it is cloudy or not cold enough for the snow surface to freeze at night? Fun fact, the snow surface can form a crust with temperatures well above freezing as long as there are clear skies. If it is both cloudy and above freezing then the snowpack will not have a chance to stabilize overnight and the potential for wet snow avalanches is especially high. A common avalanche proverb says that three nights in a row of no refreeze is an omen of major wet slab avalanches. It is best to avoid avalanche terrain and runout zones during these periods as the ingredients for large and destructive wet slab avalanches are all in place.

Cornice Fall: After building up all season the huge cornices overhanging many ridgelines are ready to fall. Melting from the sun will eventually topple all the cornices and it is best to avoid spending time underneath cornices that are receiving strong solar melting. Cornice crevasses are also common this time of year, which are horizontal cracks in the snow surface that run parallel to the cornice where the snow attached to the cornice is pulling away from the mountain side.

Glide avalanches: While glide releases can be totally random and happen under any conditions, they become more likely during periods of active melting of the snowpack. If you can see a glide crack it is best to avoid spending time underneath as it could release at any time and create a large and destructive avalanche.

It can snow anytime of year in the mountains of Alaska, especially in the higher elevation ranges some of which get the majority of their seasonal snow accumulation in the spring and summer. Keep in mind that new snow doesn’t really like to bond well with older layers of snow that have very different grain size or shape. If another big spring storm brings new snow to the region the avalanche danger will be elevated during the storm and for a few days afterwards as the new snow either sheds off of the old melt freeze surface or becomes wet enough to bond with the old snow surface and continues with the melt freeze cycle. As always look for red flags to indicate when conditions are dangerous and adjust your terrain selection based on the current snowpack conditions.

* Rapid temperature changes are less of a concern when we already have a spring melt freeze snowpack. Eventually the snowpack develops drainage channels and can efficiently transport rain or melt water into stream systems without experiencing unstable avalanche conditions. 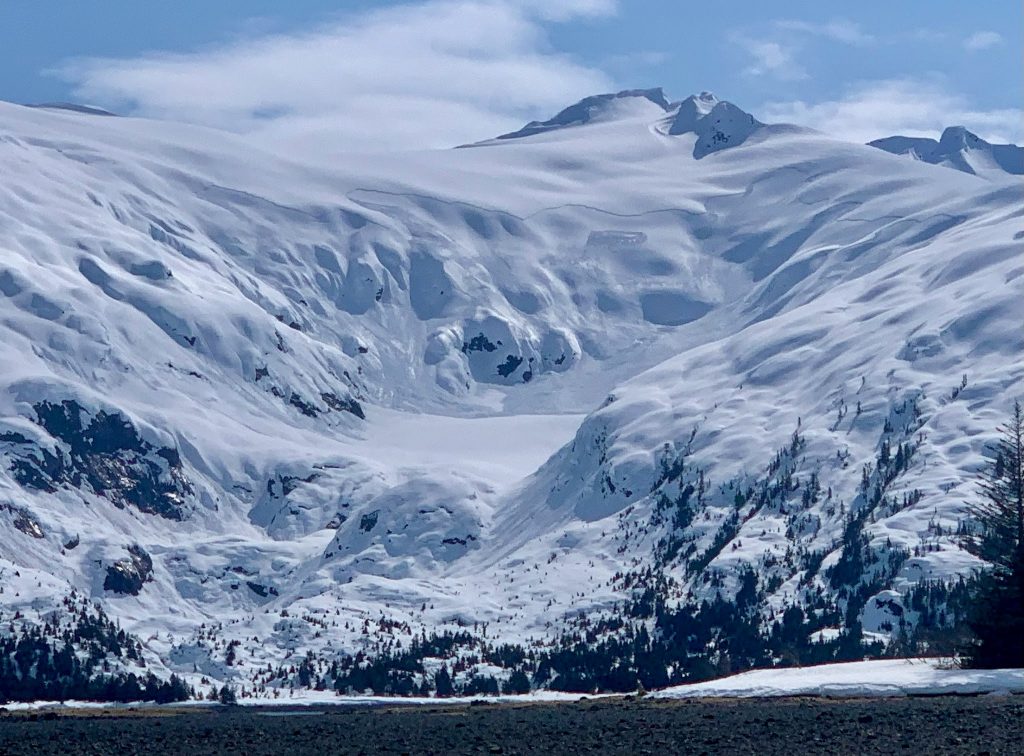 Large storm snow avalanche after a spring storm in Blackstone Bay where the new snow did not bond well to the existing surface. Photo 4.24.22

The bears are coming out of their dens and starting to look for their first meals in months. Bears sometimes den fairly high in the mountains on sloped hillsides, which means there is potential for interaction with backcountry skiers and riders. In recent years there have been several examples of skiers having encounters with bears (articles here and here) emerging from their den in the spring which are reminders to be on the lookout for recent tracks and possibly carry bear spray or an alternative form of bear deterrent if you are planning to travel in the backcountry in the late spring. 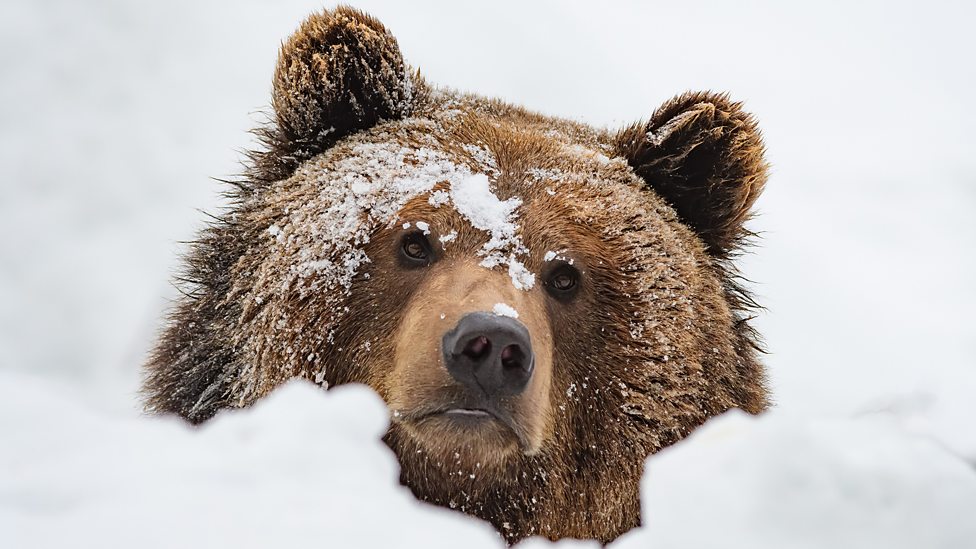 Brown bears are a common sight in Chugach National Forest during the Spring through Fall months. Photo from BBC

Headed into the big mountains this spring? Then your season of thinking about avalanches is just beginning. Many of the higher elevation mountain ranges in Alaska receive the majority of their snowfall in the spring and summer months so paying attention to avalanche conditions is a critical component of risk assessment for remote mountain expeditions. If you are flying into a new area it is wise to use the flight as an opportunity to look for recent avalanches, wind loading patterns, signs of where the snowpack still looks dry versus in a melt freeze cycle, see whether crevasse bridges are sagging on glaciers, and generally get a big picture sense of the snow conditions in the region you are traveling. You can also glean a lot of information from your pilot if they have been flying in the area recently. Once you land it will take a lot more time and energy to collect that information traveling on foot.

It is often tempting to try and take advantage of a good weather window and immediately start climbing or skiing your main objectives once you arrive in a new area. However, you probably have very little information about the snowpack structure and avalanche conditions in the area. One technique to avoid jumping into consequential terrain with limited information is to use a terrain progression to ease your way into more committing objectives. Start with low angle slopes with minimal objective hazards and gradually build up to your bigger objectives. This will give you some time to observe the mountains and the opportunity to evaluate the snowpack stability on a variety of aspects and elevations before upping the ante. Finally, it can be tempting to go ‘ultralight’ and consider leaving your avalanche rescue gear (avalanche transceiver, probe, shovel) at home but you should make this decision thoughtfully and remember that avalanche rescue is our final layer of defense in case we make a mistake evaluating the conditions. 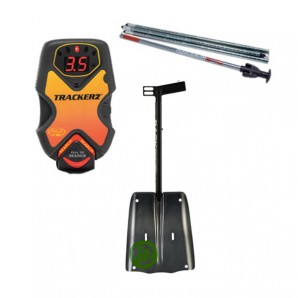 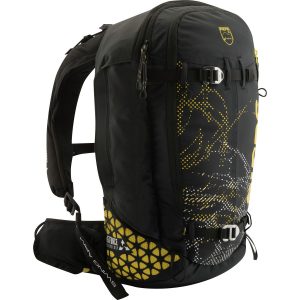