We witnessed at multiple wet loose slides entrain a lot of snow on steep solar aspects, initiating mostly from rollerballs off of rocks. They were certainly large enough bury a person, and a few covered old skin tracks. We actively witnessed at least four of these slides, one had gone before we arrived, and we were able to hear 2 more.
We also saw multiple wind slabs that likely released in the last 48hours. The were generally on NW facing terrain. Propagation seemed to generally be 100 feet wide, but running at least 1000′ in the steep terrain.
There also may have been a slab in the Magpie basin, but looked to have partly filled in.

We saw a large slab near the head of the crow creek valley. See the attached marker in the general description for its rough location. It appeared to be around 1000' wide. The crown was maybe 2 feet deep but it was hard to tell as we where quite far away. It appeared to release above a bench feature which seems to have kept it from running to the valley bottom.

See general description for other avalanches.

Clear skies and strong sunshine for most of the day till high cirrus clouds moved in around 3:45pm.
Light winds from the south, not always present.
Temp at car upon our return was -2*C

We were able to get onto a variety of aspects today.
A very thin surface crust was present on all aspects up to our high point of 3200'. This crust was breaking down on solar aspects in the heat of the day. We skied a slope that was receiving solar radiation at about 1pm, and were able to get widespread roller balls that grew to microwave-sized blocks within 50 feet.
Otherwise, on non solar aspects we noticed small surface hoar. It was micro surface hoar at the trailhead (>1mm) but grew to be 2mm near our highpoint, sitting on the very thin crust.

Handpits were our only tests today. We again found the same two crusts mentions on 2/17 Raggedtop ob, but buried a little deeper. This time the upper crust was reactive, shearing with easy force, breaking just below the crust, about 45cm down. We performed a hasty ECT at our Highpoint, on a WNW aspect. ECTN26 failing just below the aforementioned crust.
It is hard to tell, but this may be the culprit for the larger avalanches happening in the region. We were able to highjack a previous group's snowpit, and in terms of structure, it was the only layer of concern within the upper snowpack. 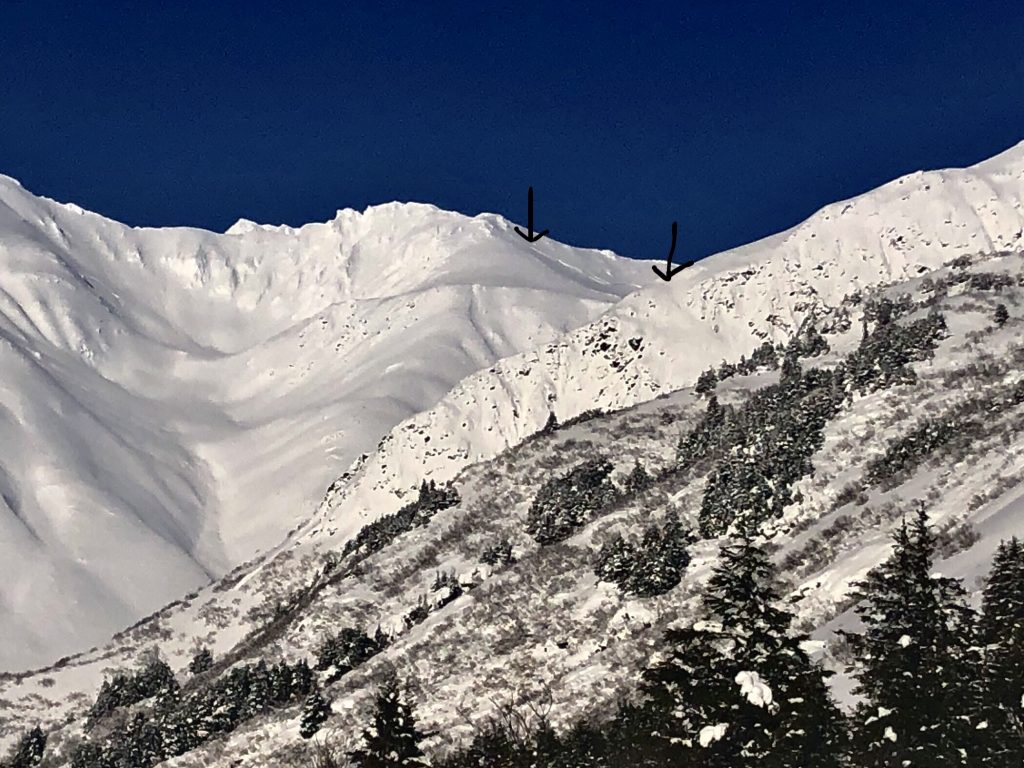 Large slab near the head of Crow Creek 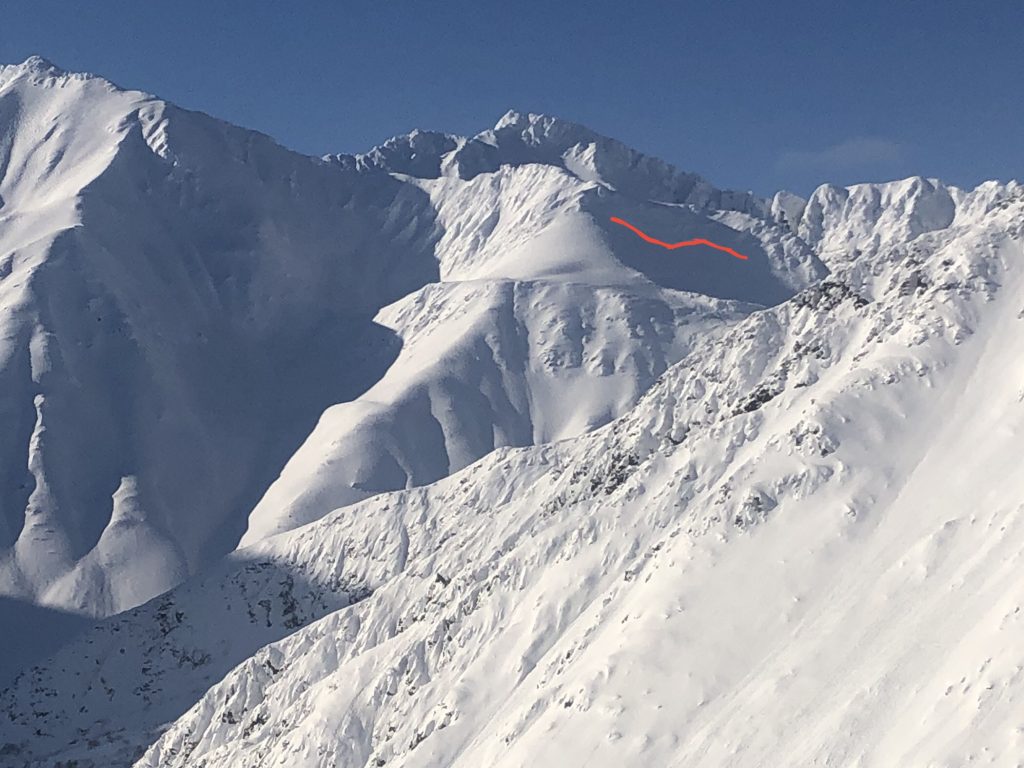 Another view of the slab up Crow Creek 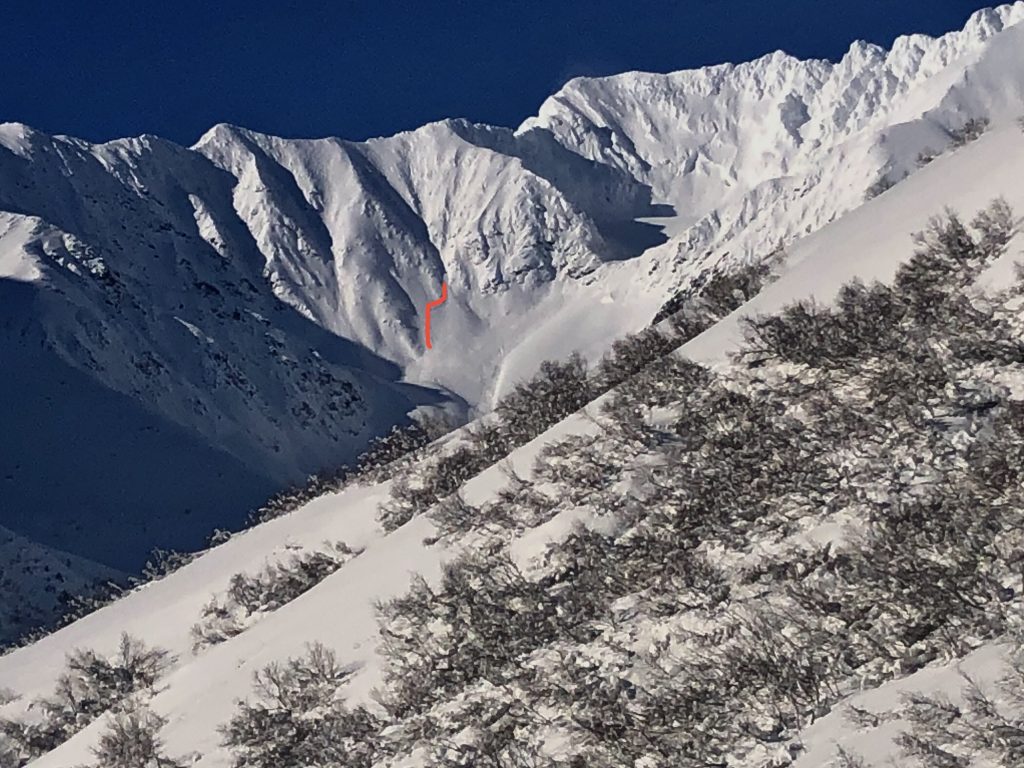 Possible slab up the towards Magpie 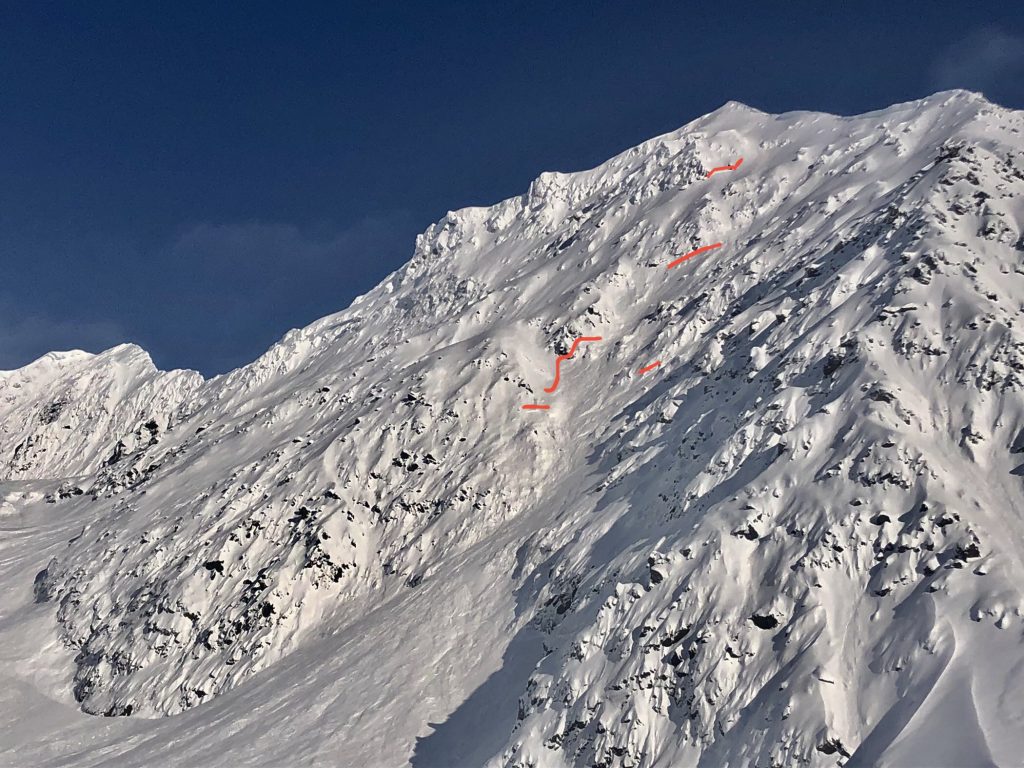 Shallow crowns on extreme terrain. It's hard to pin these on winds so far below any ridgelines. 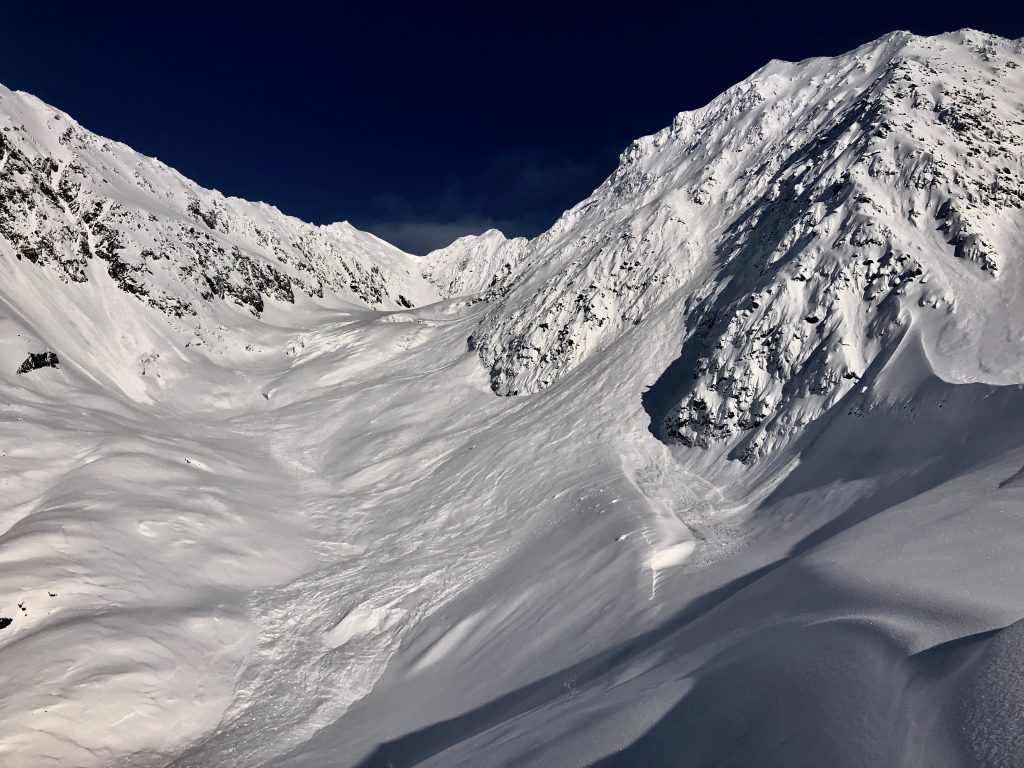 Reference Photo. Note how far down these avalanches sent debris. 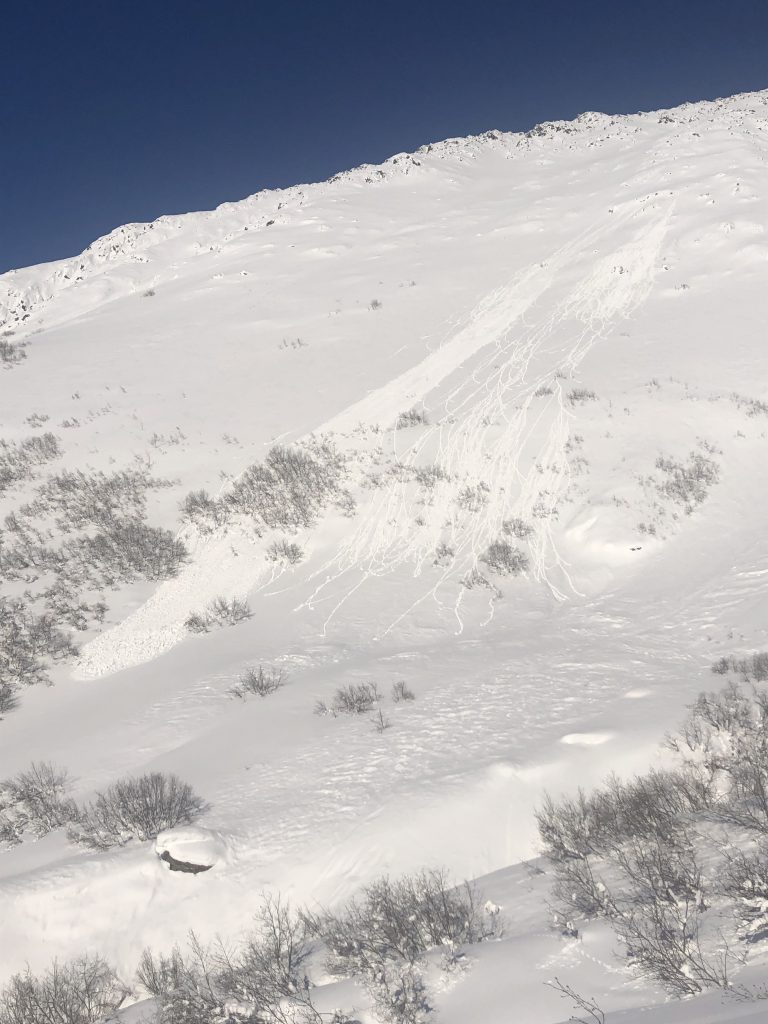 The first wet loose slide we actively witness. They all quickly entrained a lot of snow in a relatively short path. 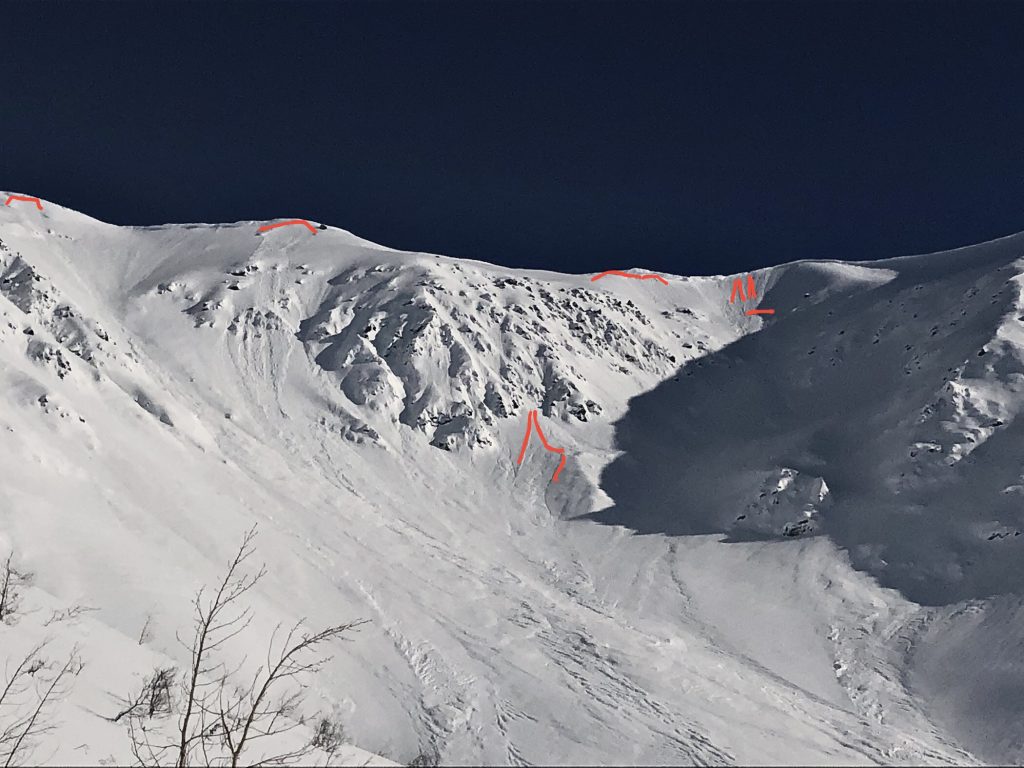 Multiple wind slabs, generally on a NW aspect. A couple look to be triggered by point releases. 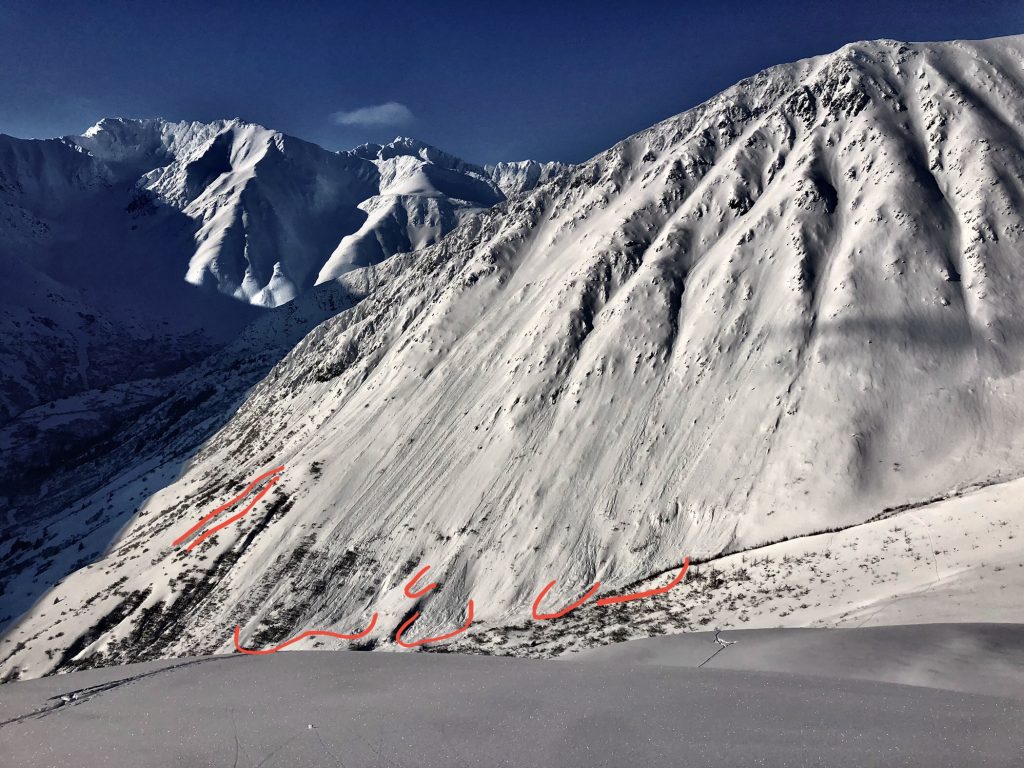 Widespread wet loose activity on a steep solar aspect, taken towards the end of the day. 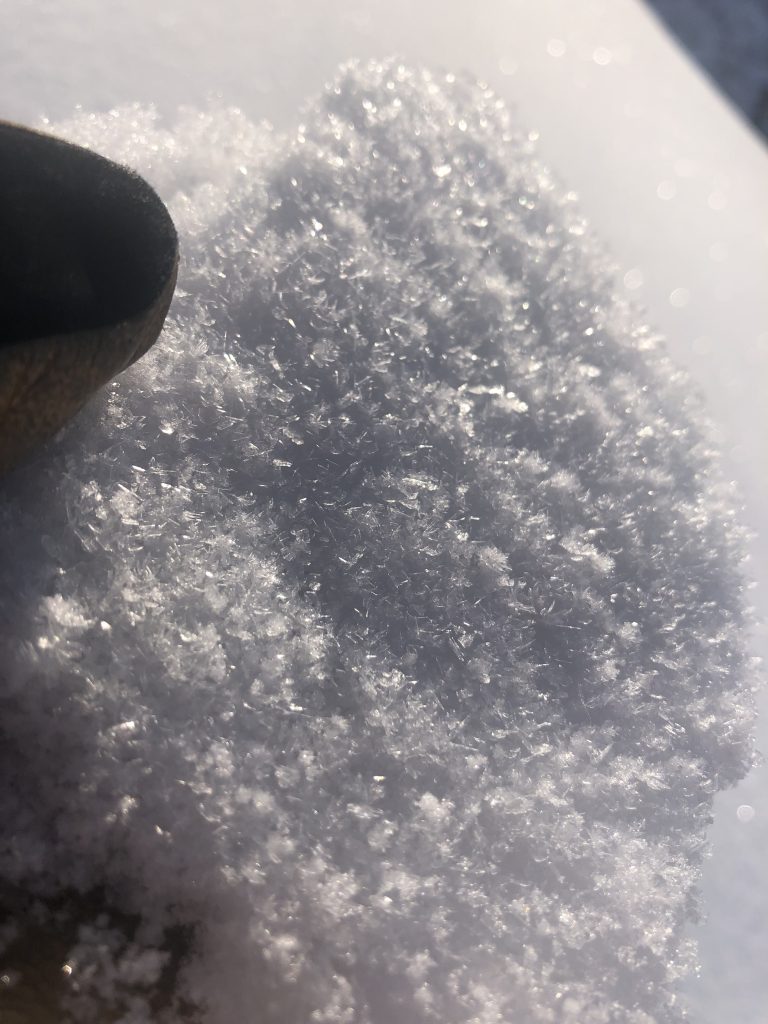 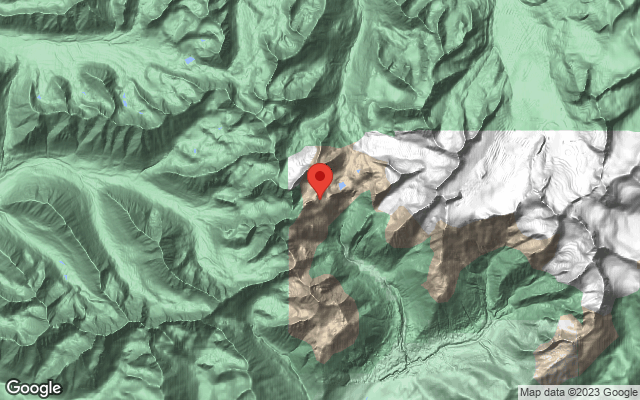