Route: Up a generally Southwest aspect past the weather station to a high point near 2000′ in elevation;
back to the Center Ridge lot following our route up.

Weather: Temperatures ranged from 33-37f throughout the day. Overcast skies with occasional lower
clouds that would obscure neighboring ridge lines. In exposed areas, light winds from the NE.

Snowpack: Varied greatly depending on elevation. At the parking lot, 2-4″ of moist melt forms were
capped by a thin rain crust. Halfway up, several crusts layers are present within a 14″ snowpack
consisting of melt forms, still capped by a rain crust. The rain crust went away near the weather station,
with the snow depth increasing to 22″. Along the entire route today, the snowpack was moist from top
to bottom.

Runout from recent D1 wet slides observed on an NE aspect of Sunburst; starting zones had either been
covered by new snow, or the slides were point releases that started at middle elevations. Debris from a
larger slide – estimated D2 – was seen up the valley on a SW aspect of Tincan, but the starting zone was
out of sight.

Widespread whumphing above 1500′, with the diameter of areas collapsing often in the 20-40 foot
range.

A quick pit near the weather station, where the height of snow was 22″, found 4″ of 1mm facets above
the ground, capped by 3mm surface hoar. An 18″ 4 finger hardness slab – comprised of numerous
layers – sat on top of that surface hoar. Two compression tests were performed, one failing on the 11
tap in the facet layer with a sudden collapse, and the other a resistant planar failure in the surface hoar
on the 12th tap.

Glide cracks present on Eddies, Tin Can, and Wolverine at middle elevations – none were seen above
~3000′ in elevation. 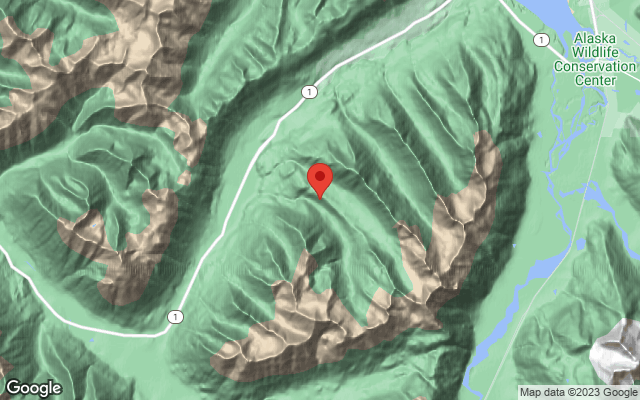