I toured up the standard route on Sunburst yesterday 11/9 with a group of five
and two dogs. We headed out in rain and blustery winds from the parking lot (38
on car’s thermometer). Below 2000 feet, the snow was sparse and icy (refrozen)
and trail was brushey. From 2000-2500, the wet snow had refrozen with a
marginally supportable crust, the overall snow depth was around boot top. Once
we finally emerged above the alders (2500) the rain changed to snow and it felt
like winter and the snow pack was at least knee deep concrete (wet pow)
providing a excellent early season workout breaking trail with an extra 10
pounds on each ski. Strong winds were howling from a more easterly aspect (ESE)
than normal out of the Taylor Creek Drainage. Around 2700 on WSW aspects,
there was an impressive collection of roller balls from the last big rain event
thick enough to resemble debris. The howling winds were doing a great job
drifting over these roller balls. Ascending the west ridge on Sunburst was a
little more challenging than usual with the strong winds trying to wrestle you
off your feet and occasional white outs during gusts. The new snow that wasn’t
carried off by the wind into the abyss of Lyons Creek was being formed into wind
slab. We ascended to the large shoulder on the ridge at 3300. Oddly the wind
abated a bit on the upper shoulder and we crept out onto a WSW aspect and probed
around for a good spot to dig a pit on a 30 degree slope. The average snow
depth was 70 cm over tundra. The profile was 5 cm of wind affected new snow (4
finger) on top of a thin crust under a 1mm (pencil) with another 5 cm (4 finger)
of wind affect snow below with a twin light crust (pencil) on top of the lower
60 cm of consolidated snow (finger). The base of the snow pack was on wet
tundra. Did a CT test and got the top 5 cm (0-5 cm) to separate from the first
light crust at 6 taps from the wrist Q2. Threw the top layer off and continued
with the CT and the second layer of wind affected snow (5 cm-10 cm) failed at 14
Q2 on top of the second thin crust. The lower 60 cm of consolidated snow came
loose from the wet tundra at 25 Q3. While transitioning we observed numerous
snow devils form on the upper reaches of Sunburst during gusts and ride the
ridge down to lower elevations buffeting skinners and scaring dogs. These snow
devils lasted from 20 seconds to 40 seconds and broke up as they reached the
alders. The descent started with a few good turns up high and quickly
transitioned to wet windblown powder past roller balls and then to a challenging
crust through the alders. The lower elevations were icy and barely had enough
coverage to justify sliding down.
–Hoping for cooler temperatures and more snow soon 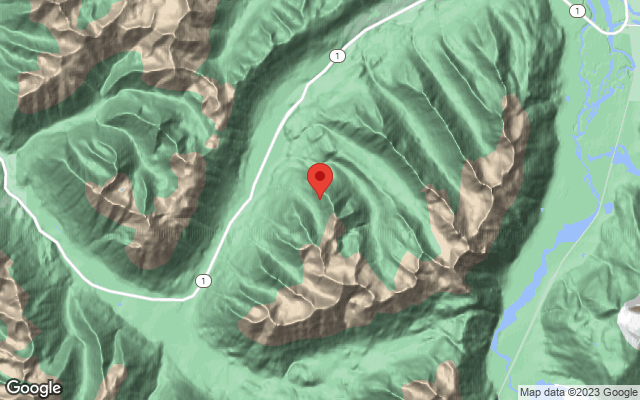