After a couple of restless days in the house, I decided to tour up toward Taylor Pass, to see what had transpired during the storm, hoping for the best.

On the drive up, besides the avalanches and point releases noted in Thamm and Wagner’s observations yesterday, I also saw two slides on the west face of Eddies, up in the upper bowl ~2800′, as well as on the west side of Magnum, also ~2800′. There appeared to be debris on the north side of Sunburst, coming out of Elevator Shaft.

Touring requires walking in the ski boots for a while.

Once on snow, which we can say is at 1500′ being generous, it’s a matter of staying on an existing track or settling through isothermal mush. Not that it is deep. From there, a little bit of a frozen crust begins to show up here and there. It is breakable and unsupportive.

Looking up at the south side of Sunburst you can see wet balls of snow all over the slope, straight up to 3000′ or so.

Further back the valley, below the weather station, I came across the debris from a slide that happened toward the end of the storm. The starting zone seemed to be at the ridge top and it ran nearly to the creek; ~1300′ long and 100′ wide. The 6-8″ of heavy wet snow on top slid on the November rain crust, which seems to be decomposing a bit, what with really wet snow above and below it.

A compression test on the crown resulted in a failure on the eighth tap, 20cm deep, but due to the wet sticky nature of the snow, a shear quality could not really be attributed to it, as I could not separate the failed block from the rest.

An ECT test revealed no failure.

I think the good news is that when it gets cold, the snowpack will be bomb proof. Albeit without skiable snow on top. Maybe there is nice snow somewhere at elevation. In which case the ice surface will form a most expedient way to get there.

Until then, the skiing is treacherous, at least below 3000′. The type of skiing that tears ACL’s. Heavy wet, isothermal snow capped with a breakable ice crust. 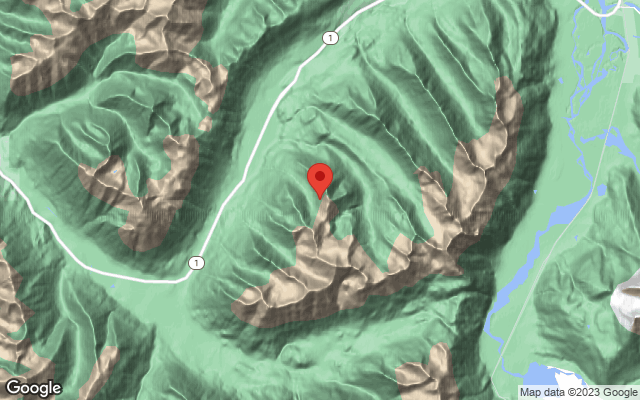