On the heels of 4 days of precip, we were able to view the extent of avalanche
activity on Turnagain Pass that had occurred during this series of storms.
Below are the ranges of what we saw:
-1′-4′ crowns
-20′-1/4 mile (Lipps) wide crowns
-D1-D3
-R1-R3
-bed sfc=old snow, some ground
-all natural triggers, to the best of our knowledge

Eddies:
Multiple 4′ crowns, mostly at low to mid elevations, below treeline. Some older
crowns that had been blown in above treeline.

Tincan
Similar to Eddies but not as many

Center Ridge
Similar to Tincan, not as many

Magnum
-older crowns, mostly right at top of alder line
-older crown on S side, looked to be very wide across (800 ft?)

Lipps
-Crown extending most of the south side of the ridge. Looked to be blown in.
Most prominent crown in higher elevations

Seattle Ridge
-older crowns at mostly upper elevations
-a lot of scouring, cross loading and generally complex loading patterns across
the East facing side of the ridge. As a result the distribution of the new snow
on the terrain is highly variable. The problem exists in pockets rather than
large, well connected slabs. There is concern for what the snowpack looks like
on the west facing side of the ridge and bowls 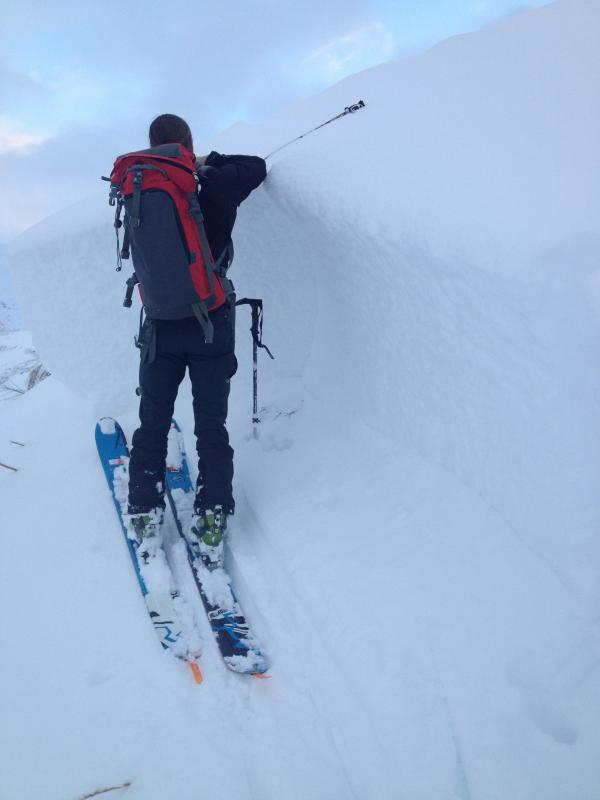 Investigating Slab avalanche between Tincan and Center Ridge - below treeline.