Standard skin track to 2300′, just above weather station. Experienced collapsing with several very load humphs below 2000′. We also experience shooting cracks on small unsupported test slope. Clear skies allowed for good visibility and could see dozens of natural avalanches and debris piles from the last few days. On SE aspects there were numerous sun triggered point releases today, all appeared to be in the top 6″ of surface snow that fell this morning without much wind. Easterly winds were transporting snow along ridges throughout the day.

All three red flags were present today. We experience several very large and loud whumphs all below 2000'. The most notable was while standing in my pit at 1600' on a S aspect while my partner, in a separate pit 30' away, stepped out of the pit into fresh snow. Her boot collapsed buried surface hoar on a sun crust 80cm below the surface and I saw it collapse in my pit wall. This was just after I preformed an Extended Column Test that had no interesting results.

I observed shooting cracks on an unsupported test slope. Crack extended 10' away and was 2' deep on a West aspect at 2000'. At 2300' I had shooting cracks in the top 6" above my skin track on a N aspect. These were only 2-3'. The sun had some heat today and was melting snow on the trees and several fresh large roller balls were seen on a S aspect below a very steep terrain feature as well as sun triggered point releases on SE aspect of Seattle Ridge.

Above 2000' this new snow was slightly wind affected

Pit at 1600'. South aspect, 32 degree slope, HS=215cm. This aspect was in the sun, which had some heat while we were digging. The top 6" new snow was starting to get sticky. Three crusts were found in the top 80 cm. The first one was 15cm below the surface and was only 1cm thick. The second one was 45cm below the surface and was 2cm thick. Both of these crusts were caused by warming mid storm where rain was falling on snow. The third crust was 80cm below the surface and was a sun crust formed between Feb.2-Feb.5 and had 3-5mm surface hoar just above it. None of our tests showed any notable results on this layer, one ECTN28 in an adjacent pit. Compression tests failed with moderate force under the middle crust. However I watched this layer collapse in my pit wall after my partner stepped out of her pit into fresh snow while filling her pit back in. This also caused a very large whumph.

3 pits at 2300' (North, SW, SE aspects) Small surface hoar was only found sitting on a sunburst in the pit on a SE aspect. The sun crust was very jagged, almost like sastrugi that had baked in the sun. The buried surface hoar was 75cm below the surface. I probed around on all of these aspects and the height of snow varied from 200+cm on Southern aspects to 120cm on a Northern aspect. Dug a pit in this area to look for old weak snow(facets) near the ground. Found 4F t0 1F hard facets in the bottom 50cm of the snowpack. Could not get this layer to fail in tests. There were no interesting results in any of these pits other than a density change that failed 40 - 50cm below the surface with moderate force in compression tests in all of these locations. ECT's did not propagate. 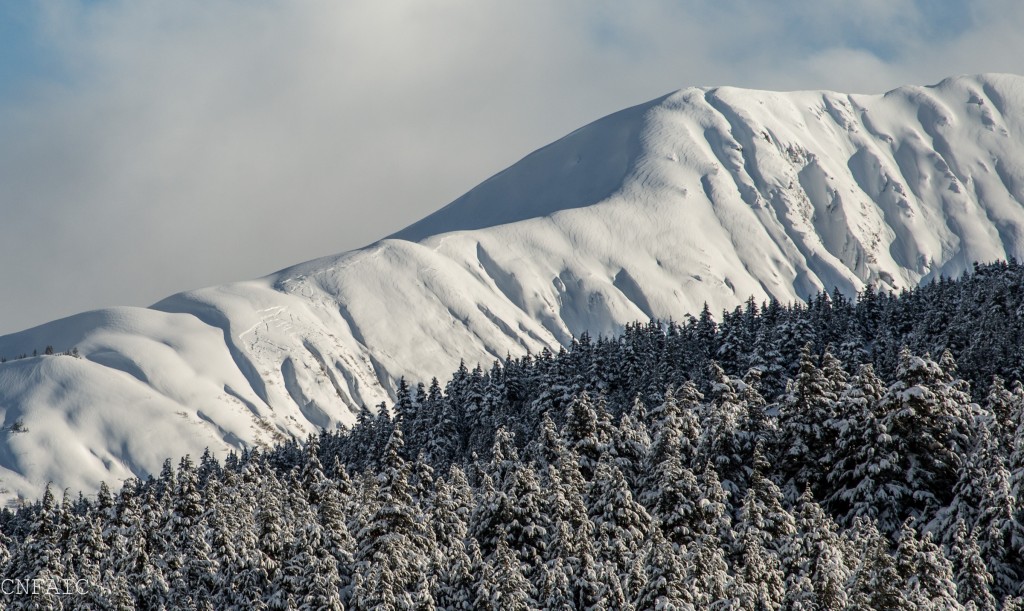 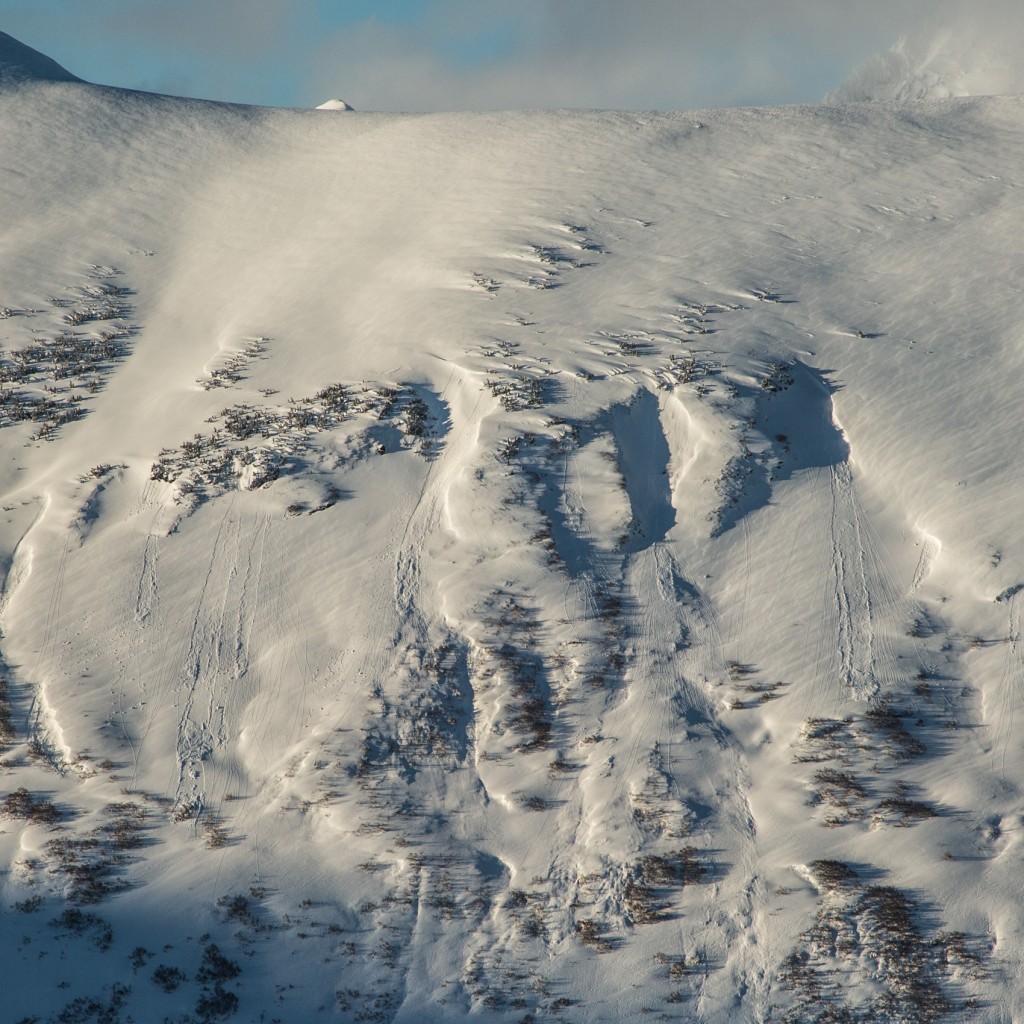 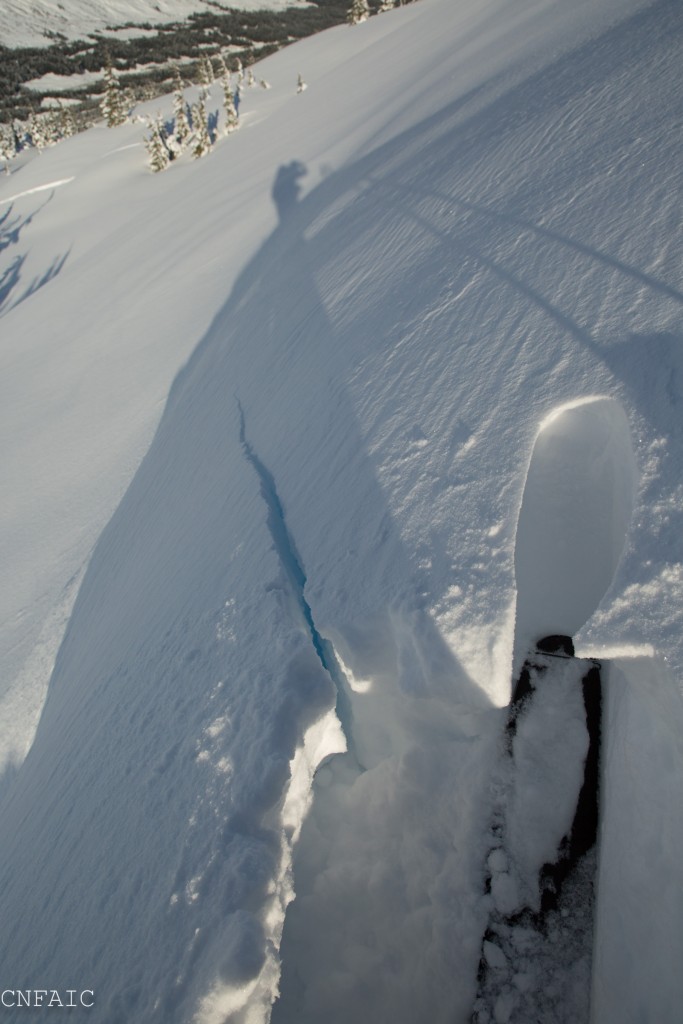 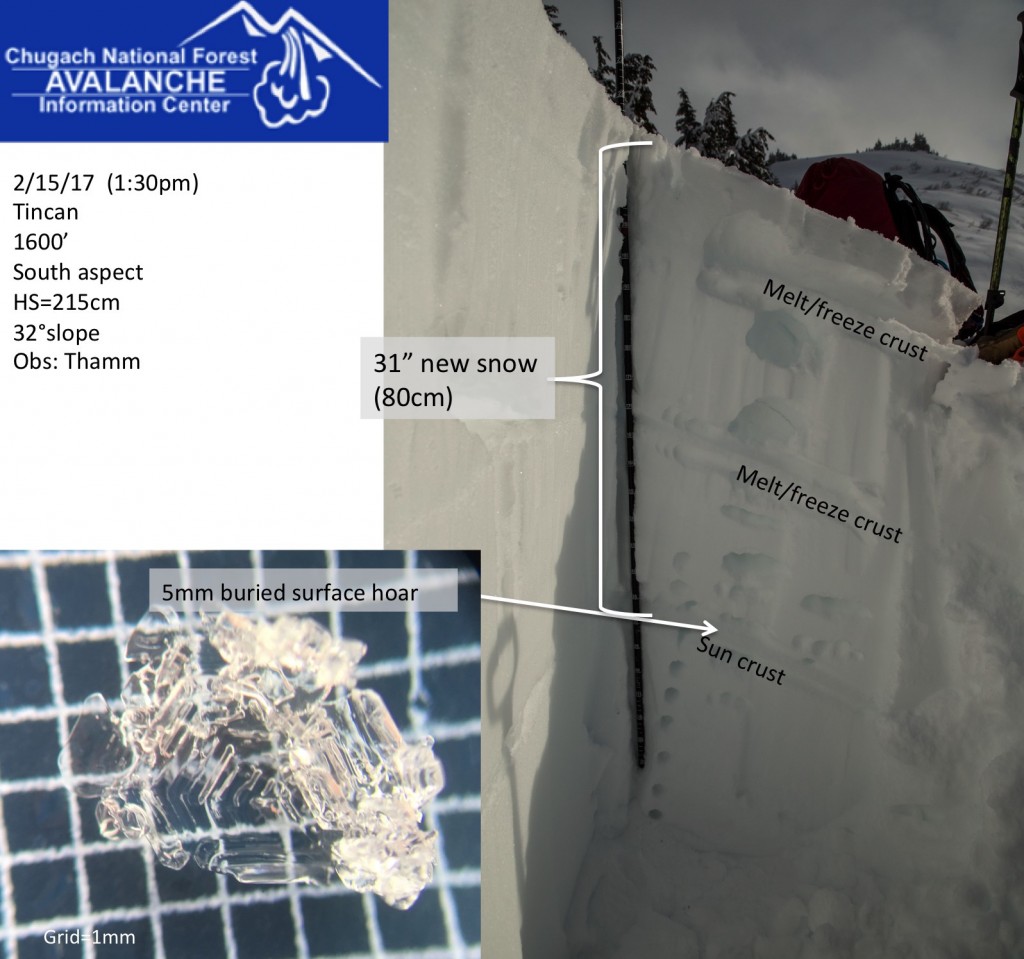 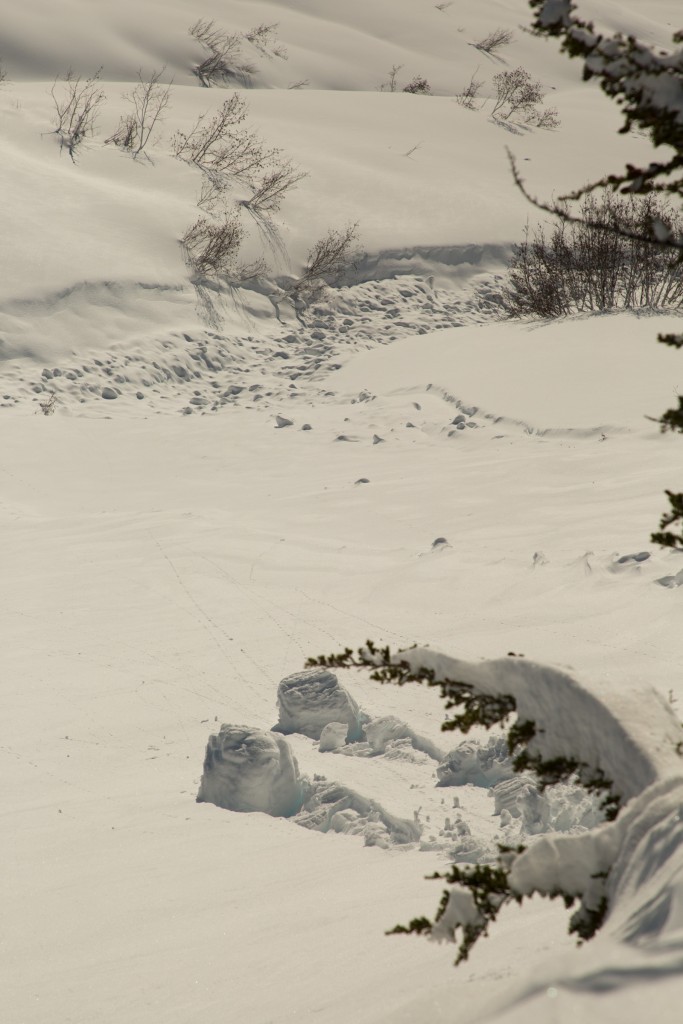 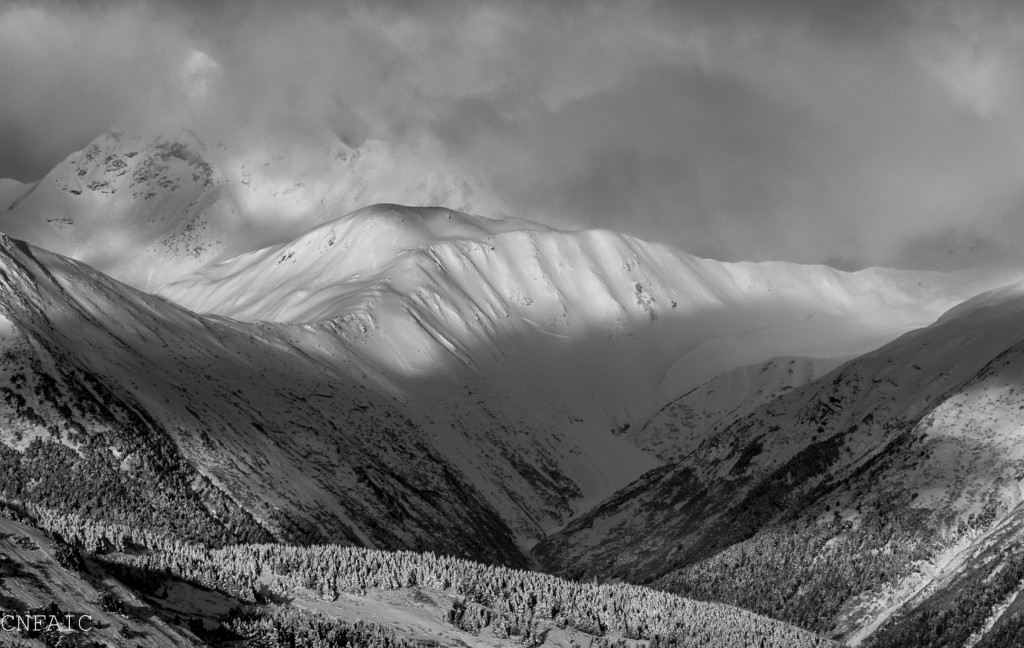 Could see large crown and big pile of debris in Peterson Creek, SE aspect, from Tincan 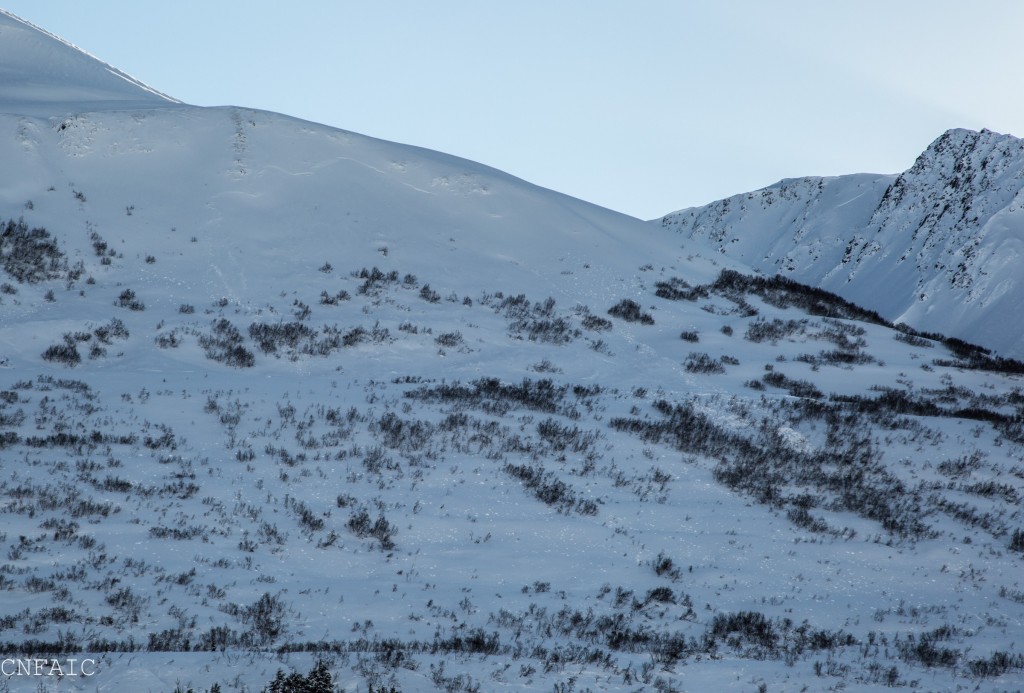 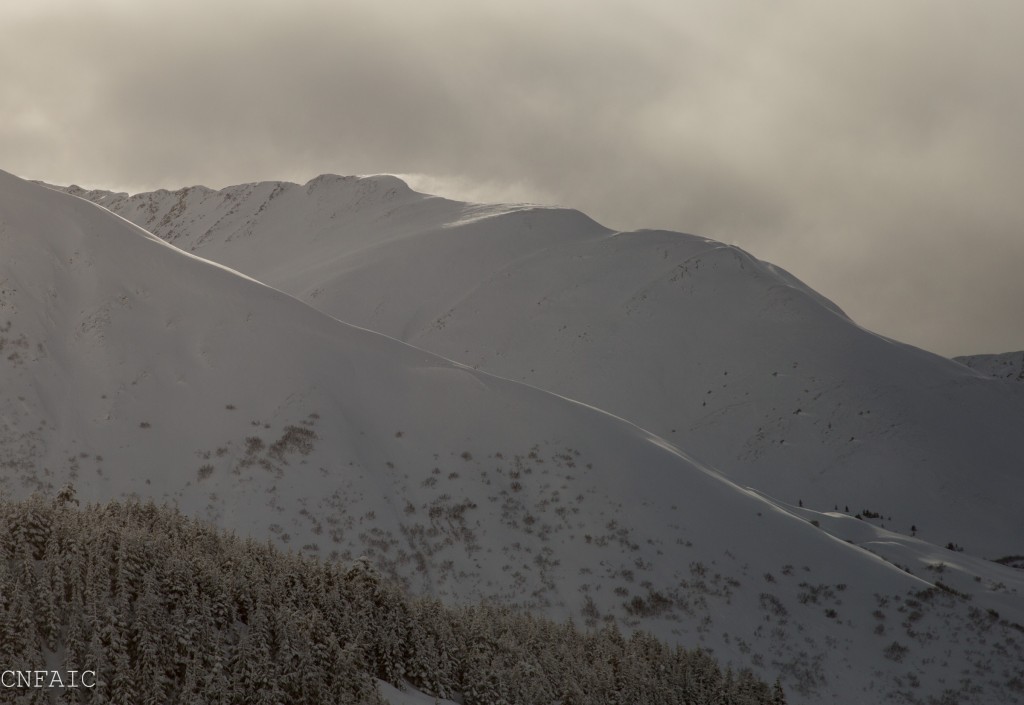 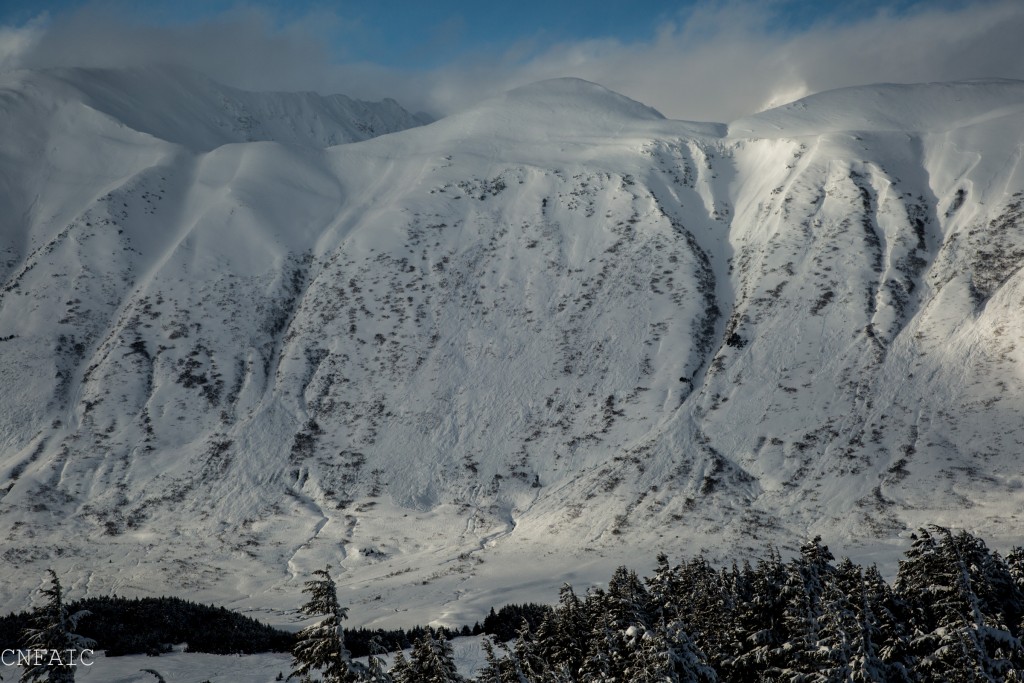 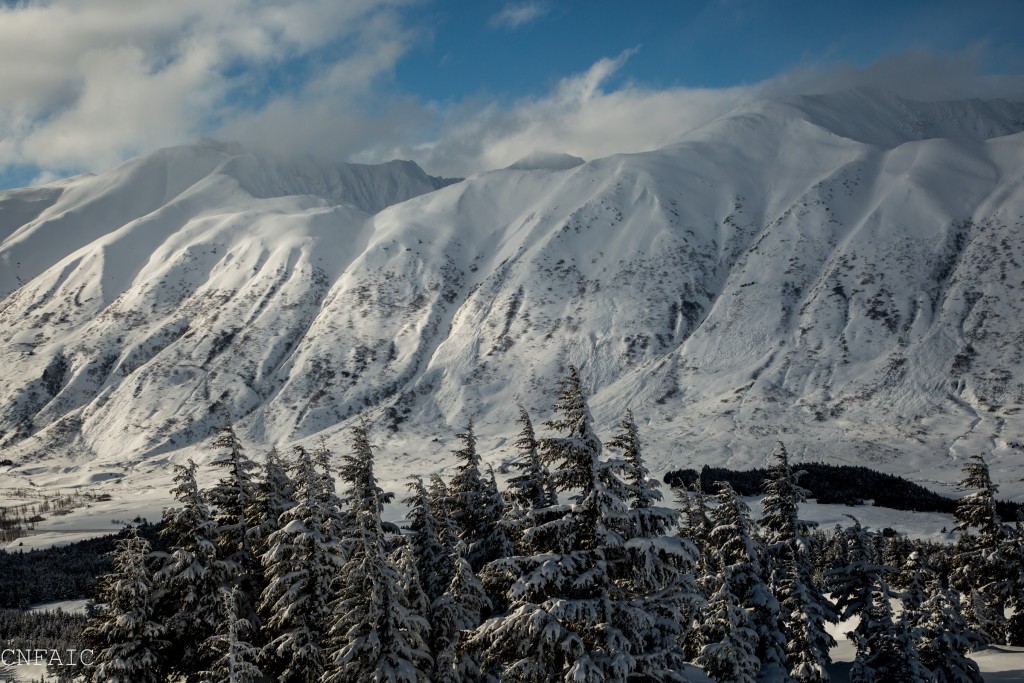