Standard route along SW ridge of Tincan to 3200′ on ridge above Common Bowl. We toured along South facing slopes the entire way monitoring surface conditions with afternoon warming. The snow was wettest and weakest below 2500′ on steep South aspects. In shady areas on North and West aspects the crust remained firm and supportable. In the upper elevations South aspects had 3-5″ of wet pushable surface snow, but it wasn’t breaking down like the lower elevation areas.

Wet punchy snow on South aspects below 2500' in the afternoons with warming.

Below 2000' South aspects were wet and punchy. Ski pen was 6-10" in some places and boot pen was up to mid thigh at 2:30pm. A stout supportable crust was found on shaded aspects. Surface crust were softening on lower angle oblique SW aspects. As we ascended to 2500' South aspects started becoming less punchy and more supportable with boot pen only 8-10" on steep South aspects. On shaded aspects above 2500' 1cm of loose snow was found on a firm surface crust. This crust was becoming breakable by 2800' and disappeared by 3000'. South aspects between 2500' to the ridge above Common bowl (3200') there was about 2-3" of loose wet surface snow that was easy to start pushing, but did not entrain deeper into the snowpack.

Firnspiegal was found on SE aspects in the alpine. The avalanche glossary definition: "An ice crust formed on the snow surface on sunny, cold days. The sun's heat penetrates the surface snow layers and causes melt around the grains beneath the surface but meltwater at the surface is refrozen forming a thin layer of ice. This requires just the right heat balance."

Dug two pits at 3200' on Tincan. One on Southeast aspect and the other on North aspect.

Pit 1 - SE aspect, 3200', 22*slope, HS=305cm, Pit HS=100cm, Boot pen=15cm of wet surface snow. See photo diagram. Several melt/free crusts (old sun crusts) were found within the top 18" of the snowpack. Compression Test failed with moderate force just below these crusts, but ECT's had no failure. In both places the weak layer was a density change, no persistent grain types were found. 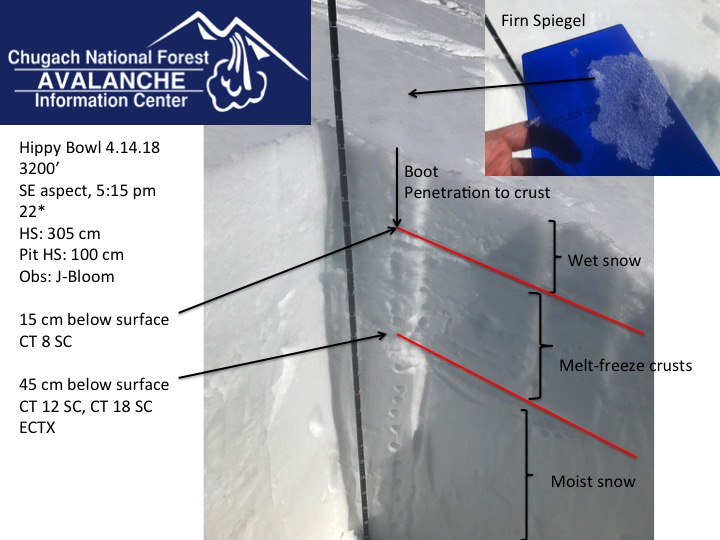 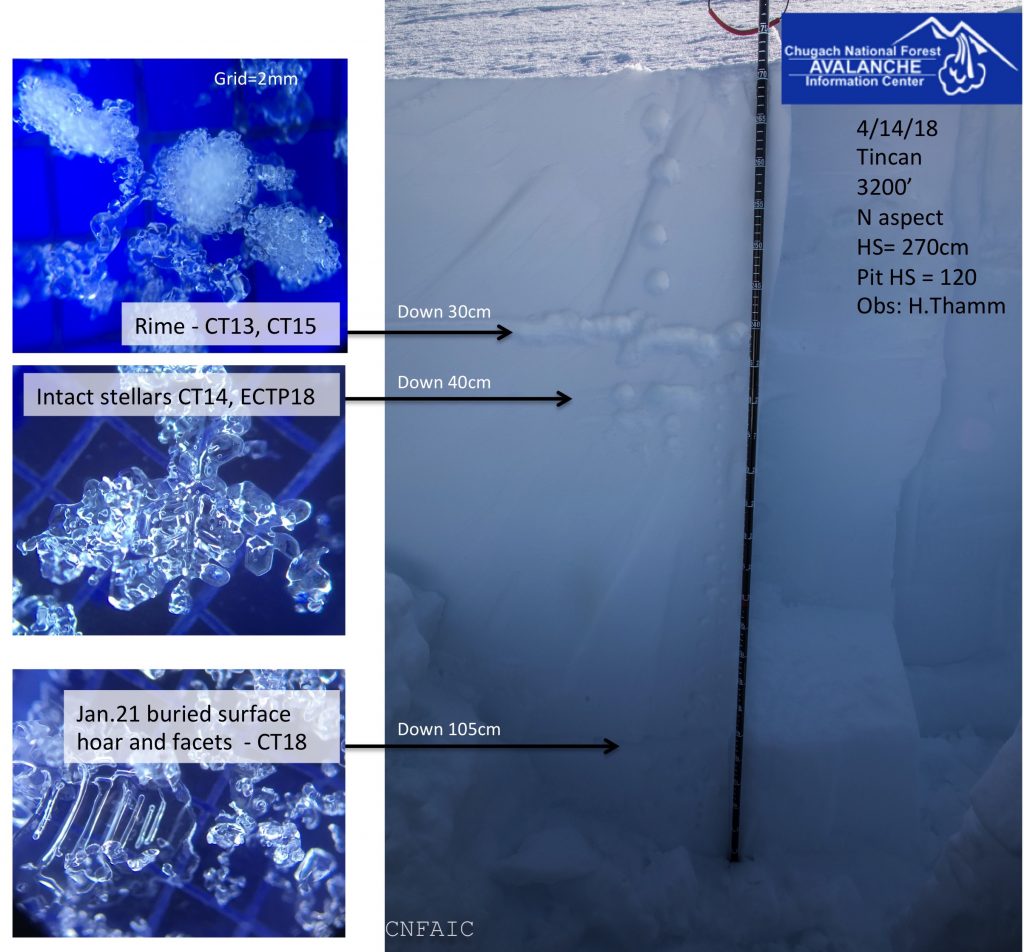 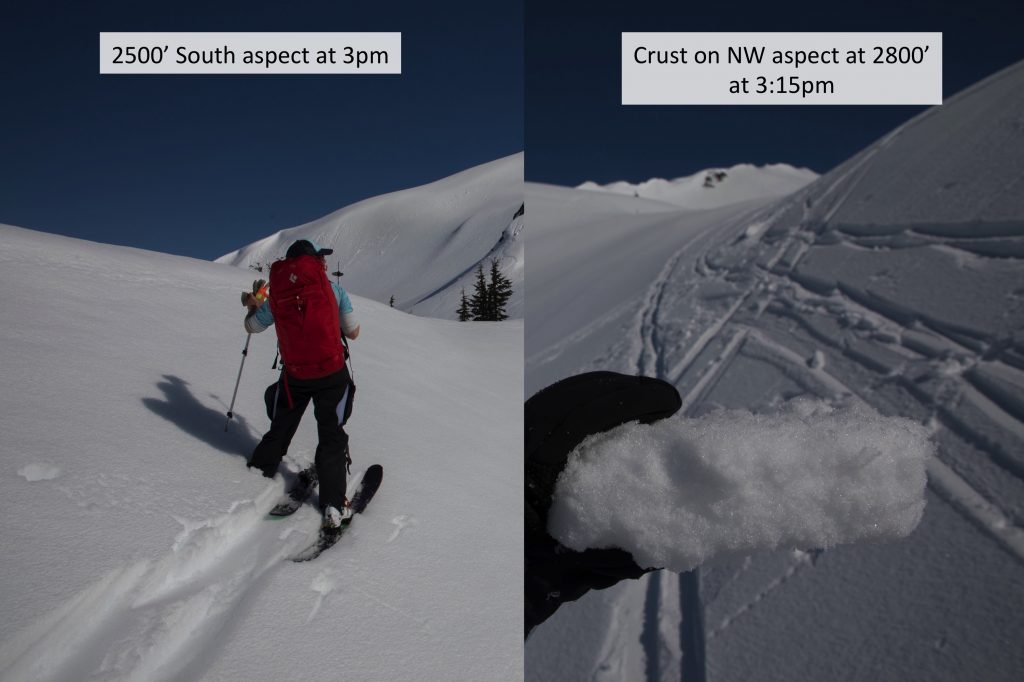 Crust was found on slightly Northern aspects and became thinner and more breakable with elevation, as apposed to South aspects where surface snow was wet 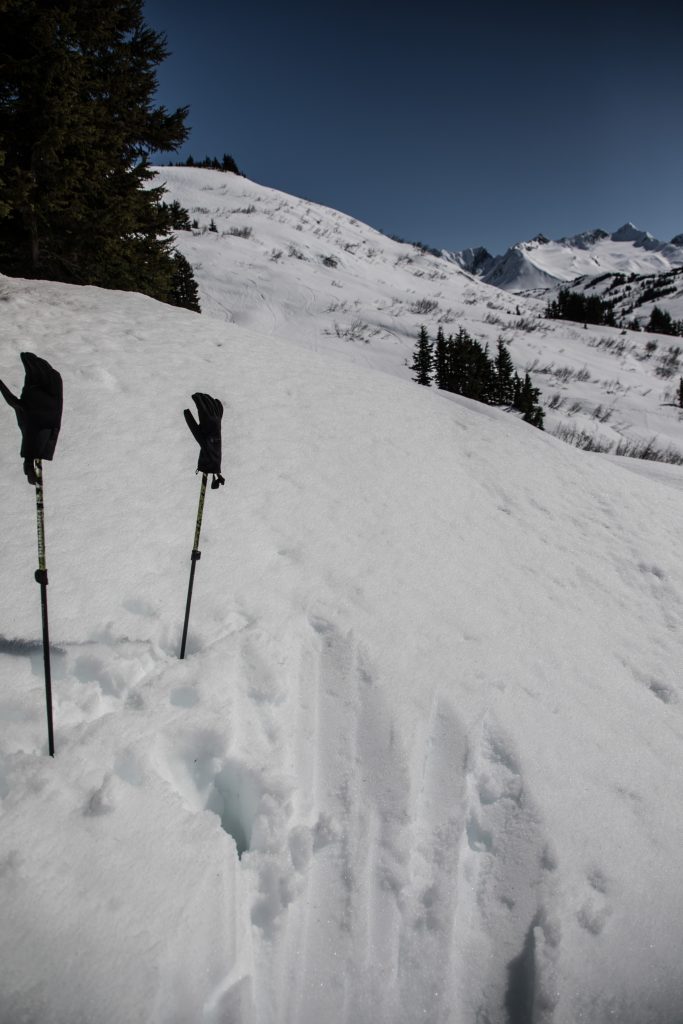 Surface snow at 1800' was very punch on South facing slopes. 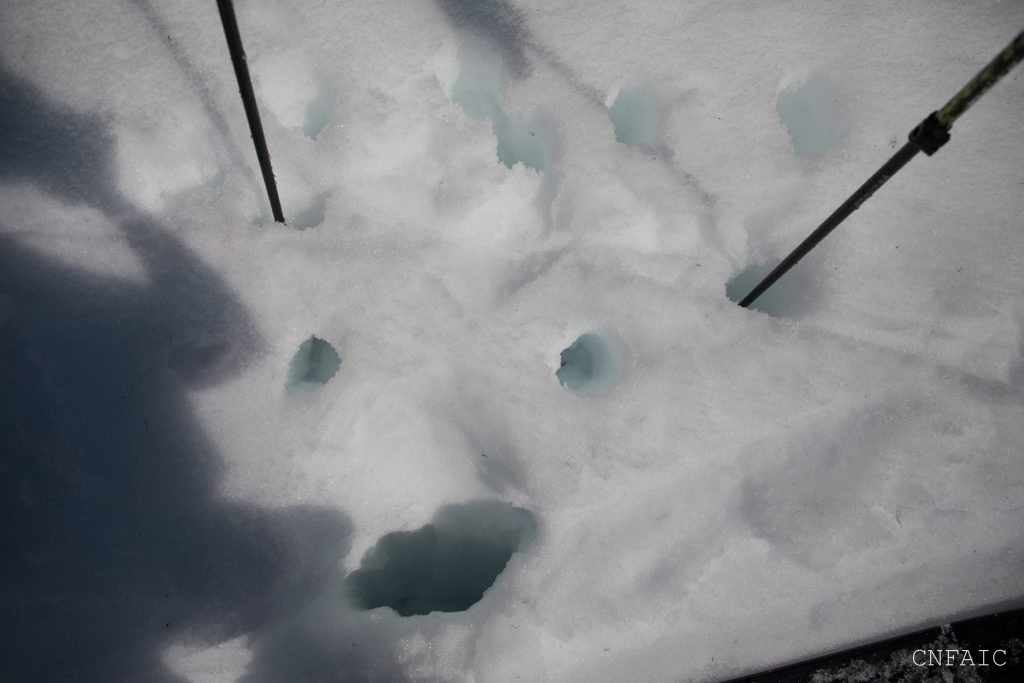 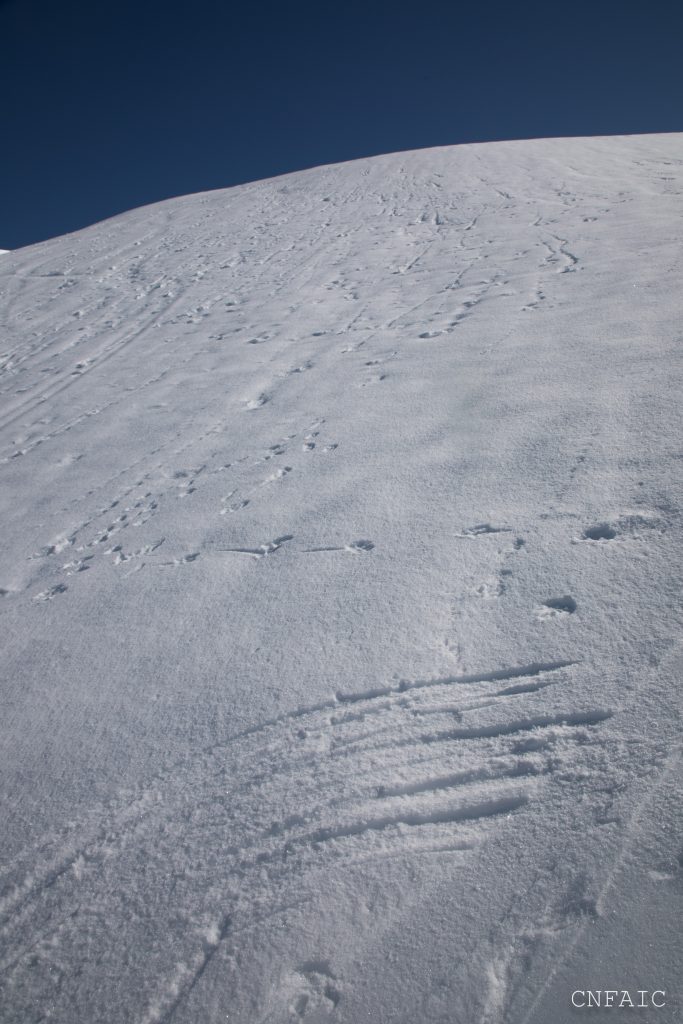 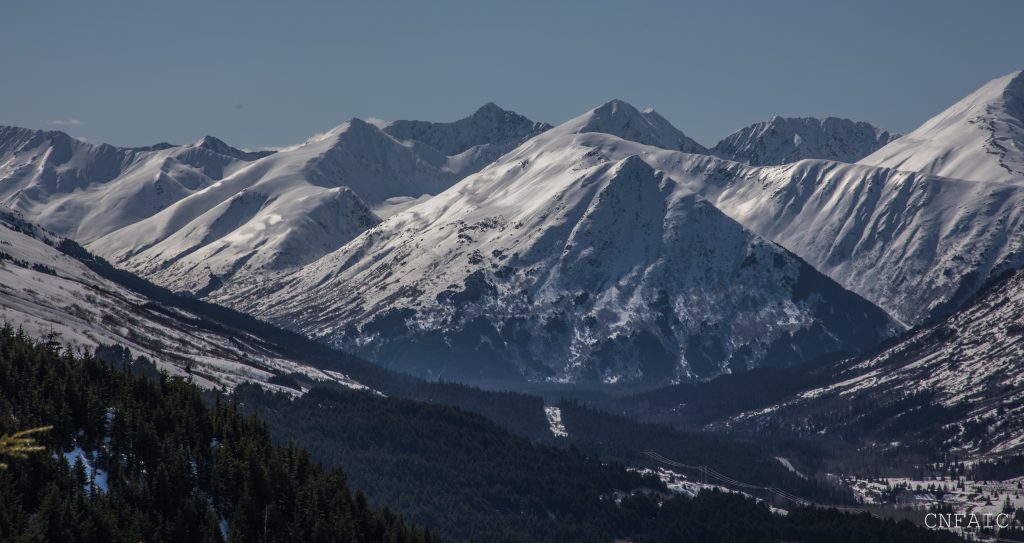 You could see firnspiegel from a distance on East and SE aspects in the alpine. See pit diagram 1 for a close up of this thin ice lens. 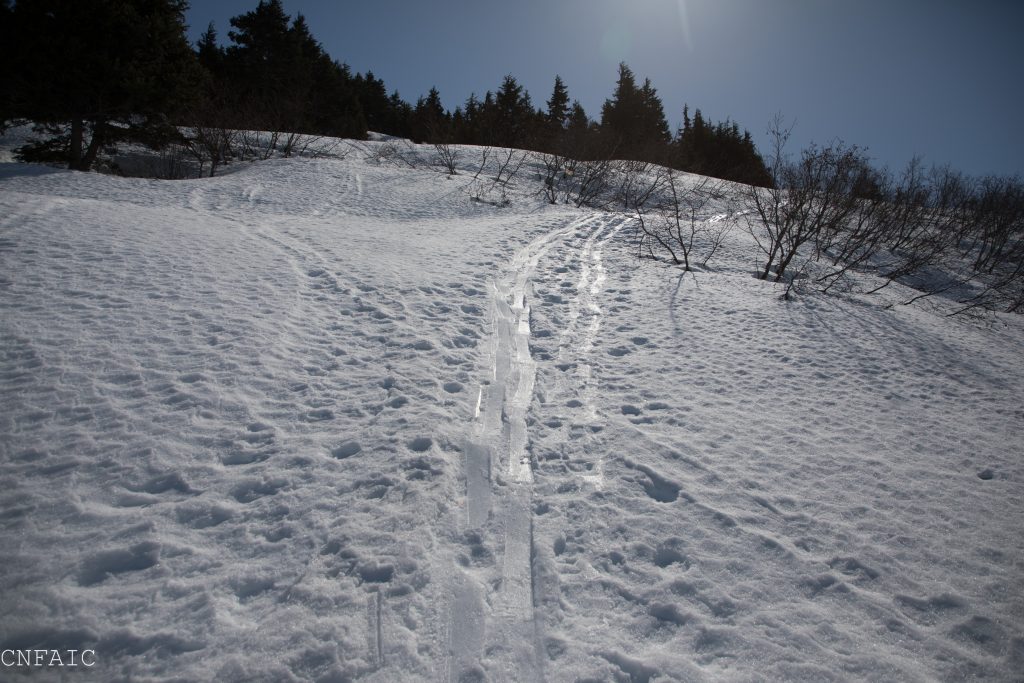 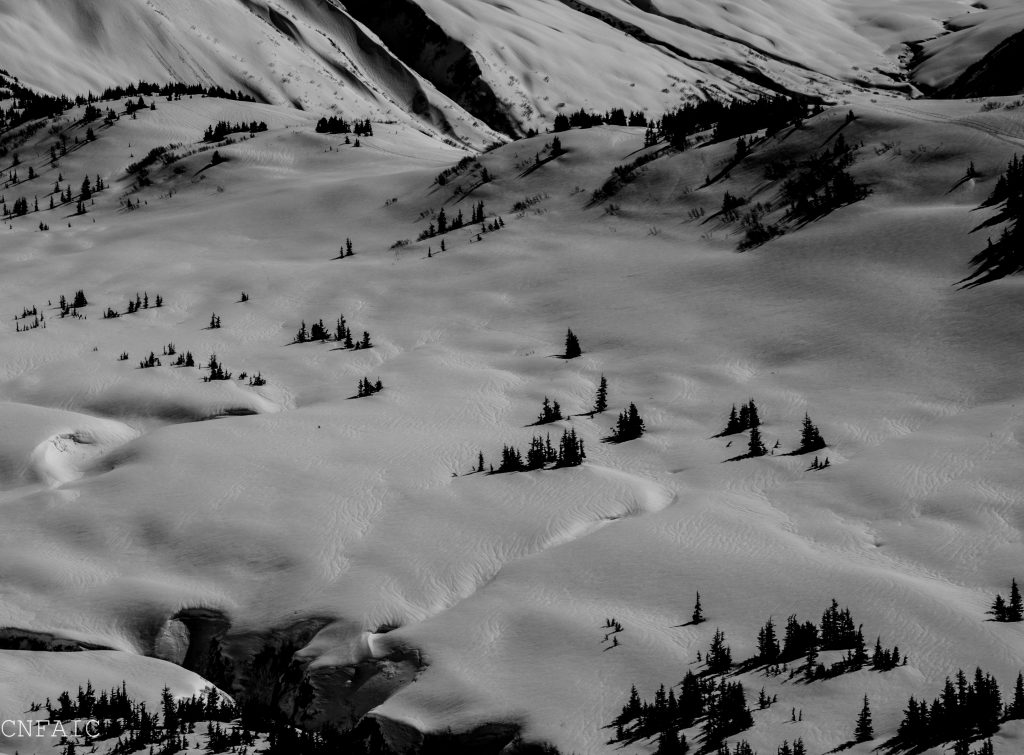 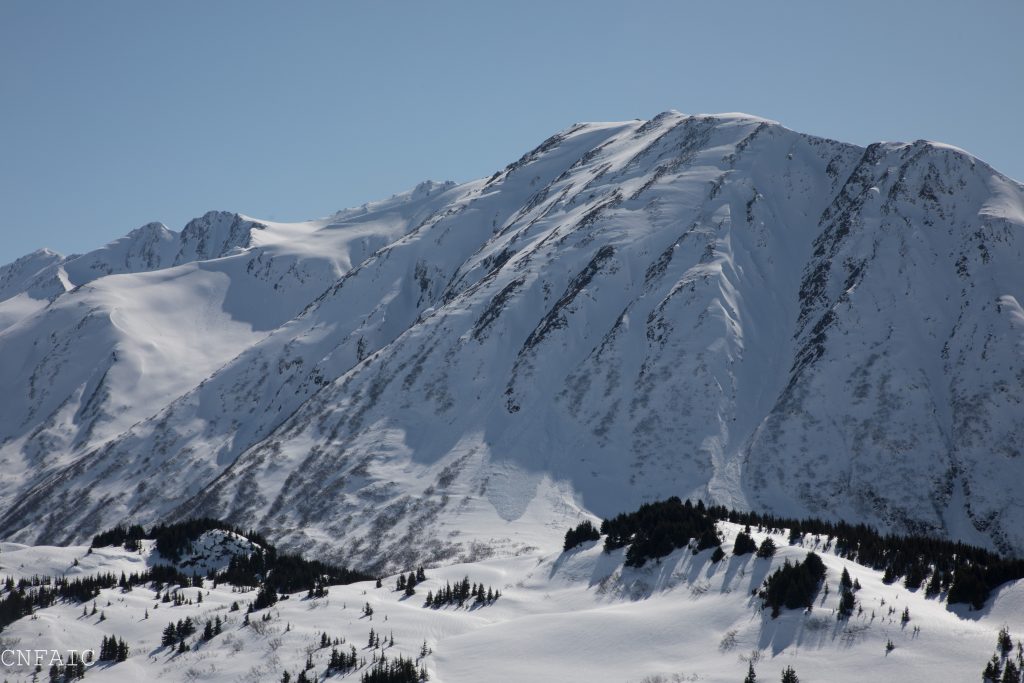 Debris from the last storm in Northern chutes of Sunburst 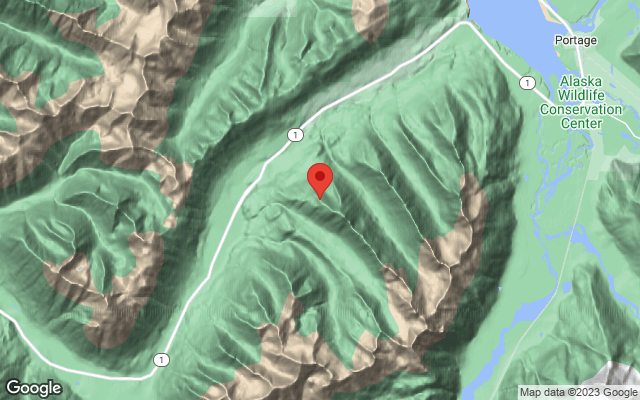