Tour up to the top of Tincan Common to investigate how the snowpack is doing after 2 weeks of warm storms and 12-20″ of new snow last night.

Overcast with low clouds around noon, skies opened up slightly at 2-3pm before becoming overcast with valley fog at sunset. Light westerly breeze along 3,000' ridgeline, otherwise calm. Temperatures in the mid 20's F at 3,000' and around 30F at 1,000'.

2200', West, 15 deg, Snow Depth 150cm
Bottom 100cm was a combination of wet snow layers, moist snow layers and crusts. The crust at 100cm was about 10cm - 15cm thick but it was still somewhat soft and you could poke a pole through it.
Top 18" was new snow from Dec 15th. This was sticking very well to the curst underneath it. We had an ECTX when testing the storm snow and new/old interface. A shovel shear test showed a storm snow weakness around 12" down. See video.

3300', Southwest, 25 deg, Snow Depth 175cm
Bottom of snowpack had 0-10cm of moist old facets that were rounding and sticking together. Over this was a 5cm MF crust that was also moist and breakable. Above this was a solid, pencil to knife hard pack with two 5-10cm crusts (one at 100cm and one at 125cm). These crusts are from the warm storms last week.
Top layer of pack was the new snow. This was ~20" deep and sat on the upper most crust at 125cm from the bottom. It was fist hard on top and gradually become pencil hard at the bottom.
Test scores: ECTP 21, 12" down in a hardness change, resistant planar, non repeatable. ECTX otherwise.

Botton Line: In this area, pack was showing signs of gaining stability as a whole after the 2 weeks of warm storms. The new storm snow looks to be quite sticky and unreactive, difficult to kick out even a small wind slab. 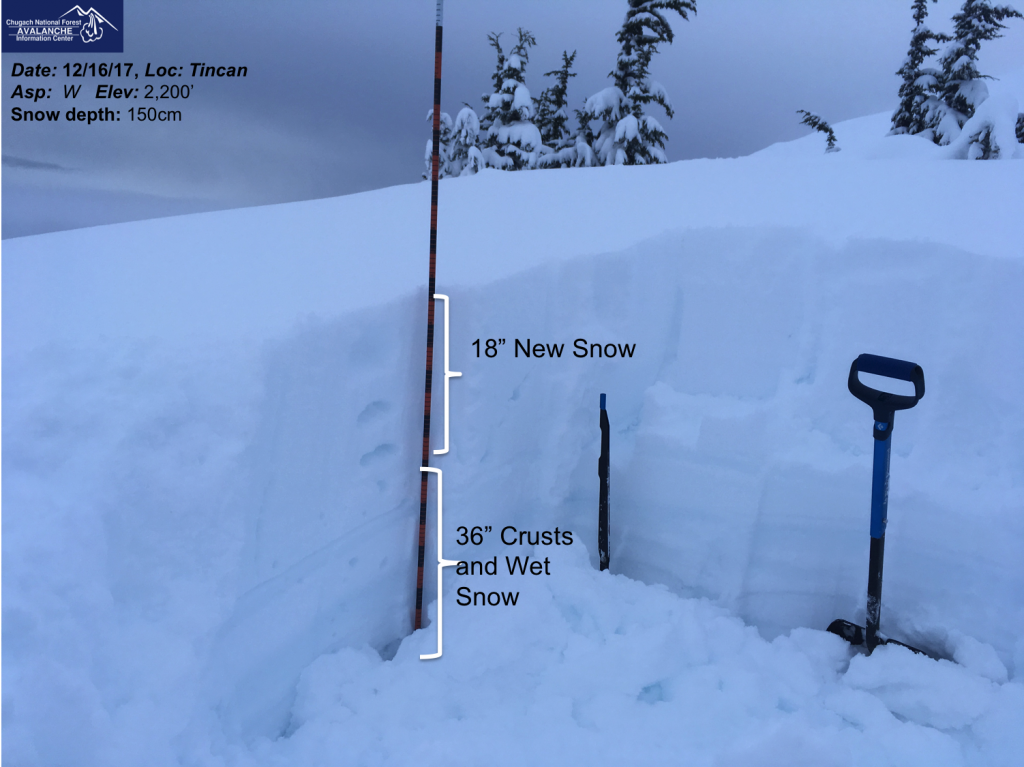 Snowpack at 2200', no signs of instability in tests, new Dec 15 storm snow sticking well at this point 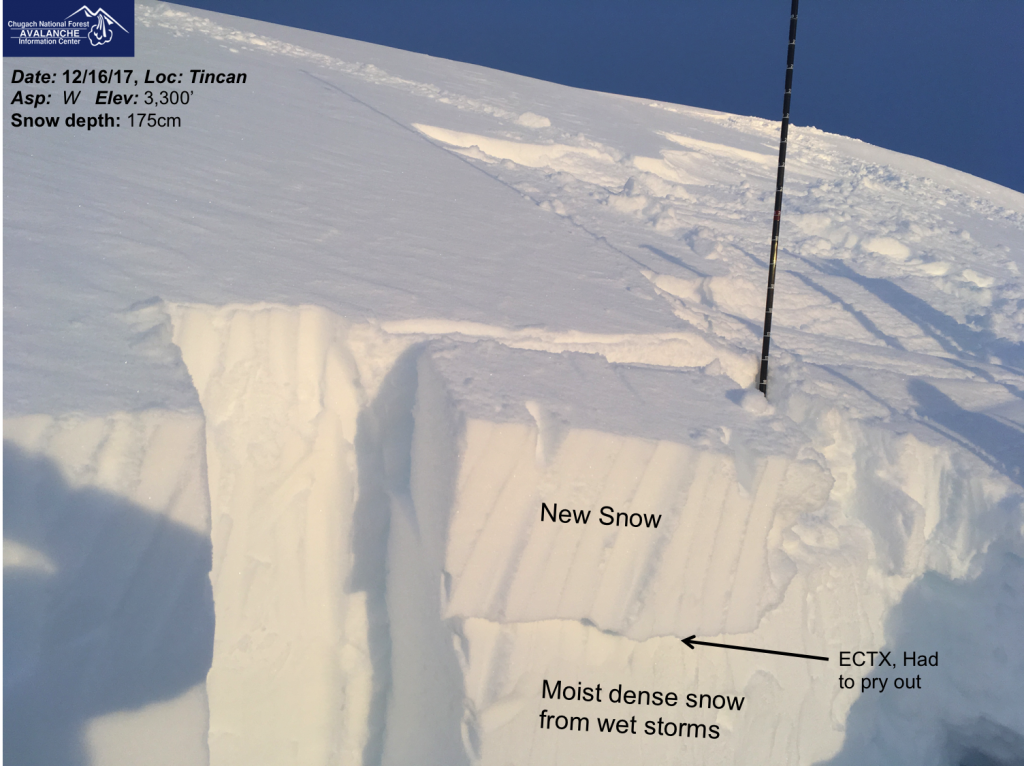 Snowpack at 3300', one test result pointed at sluggish wind/storm slab 12" down in recent storm snow, otherwise no reactive layers found. 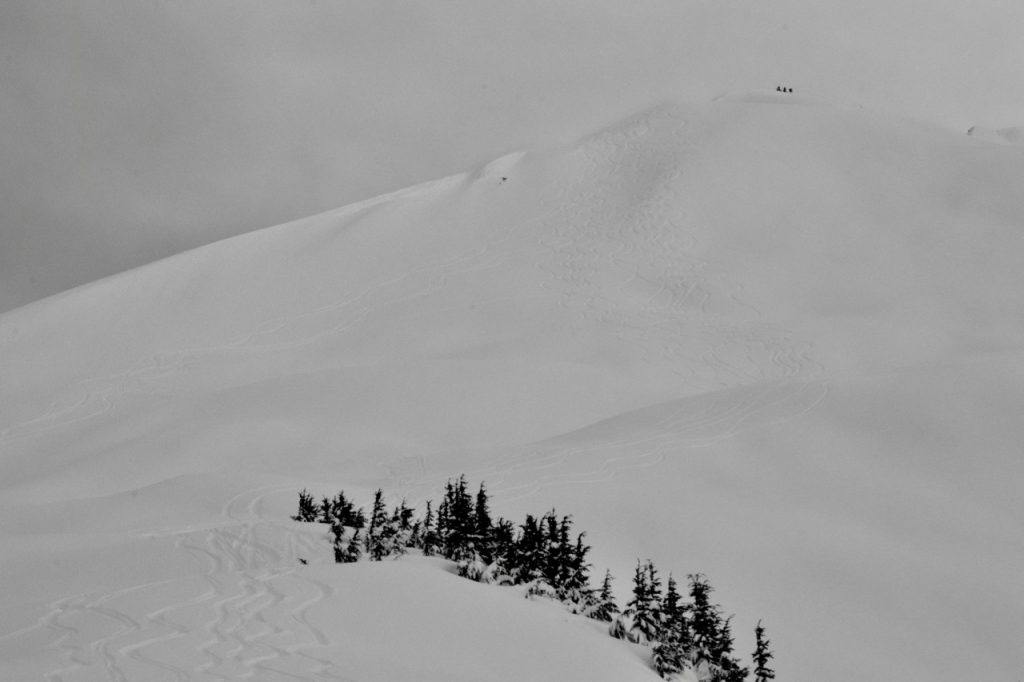 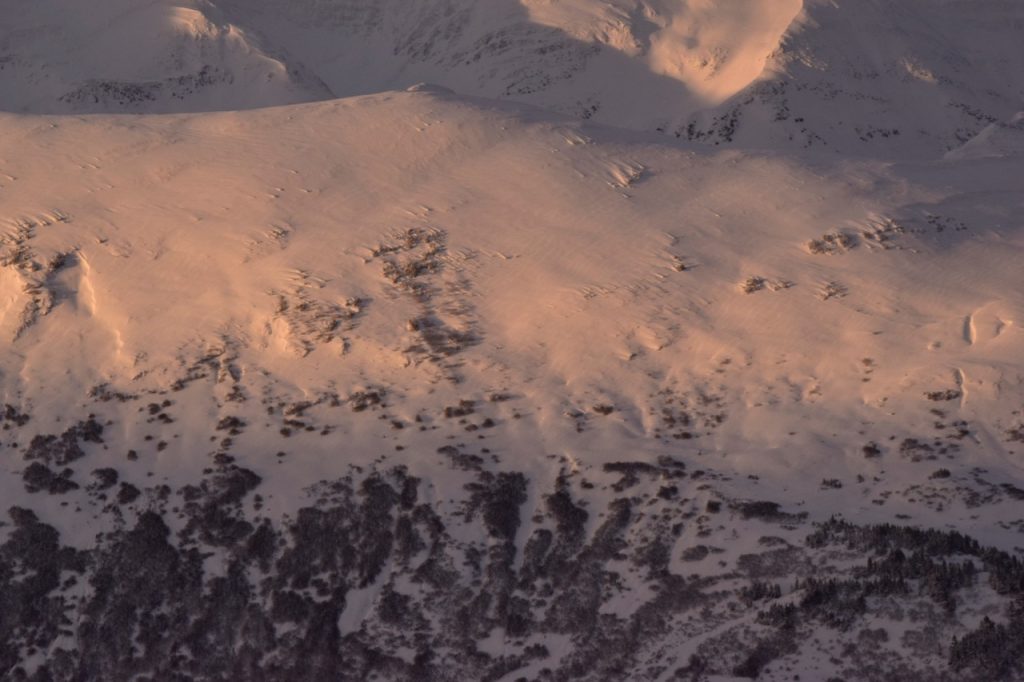 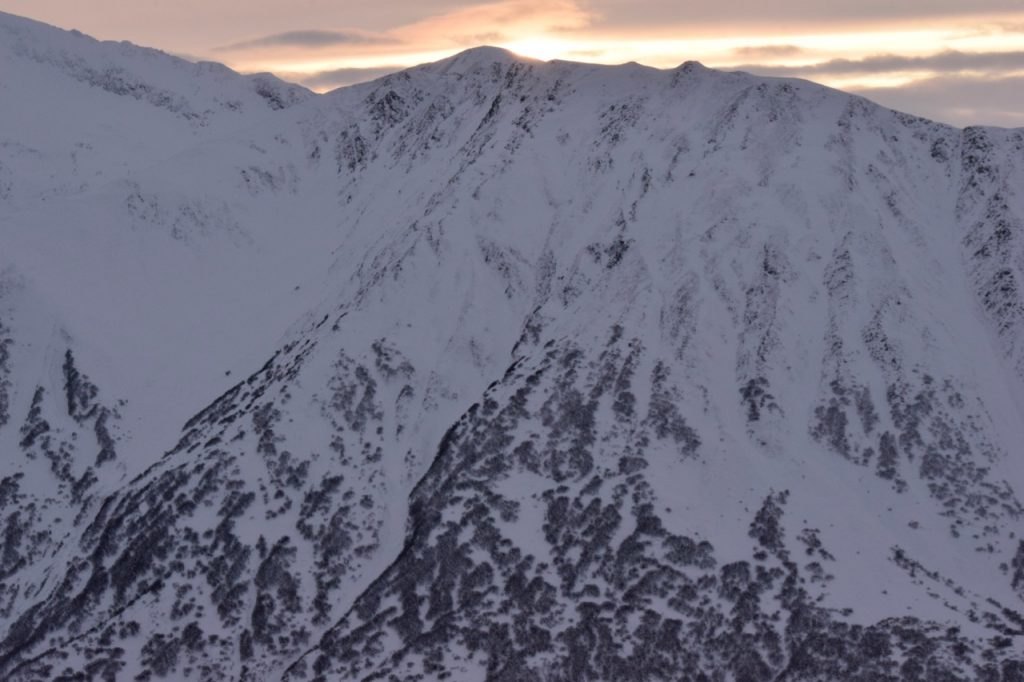 North side of Sunburst 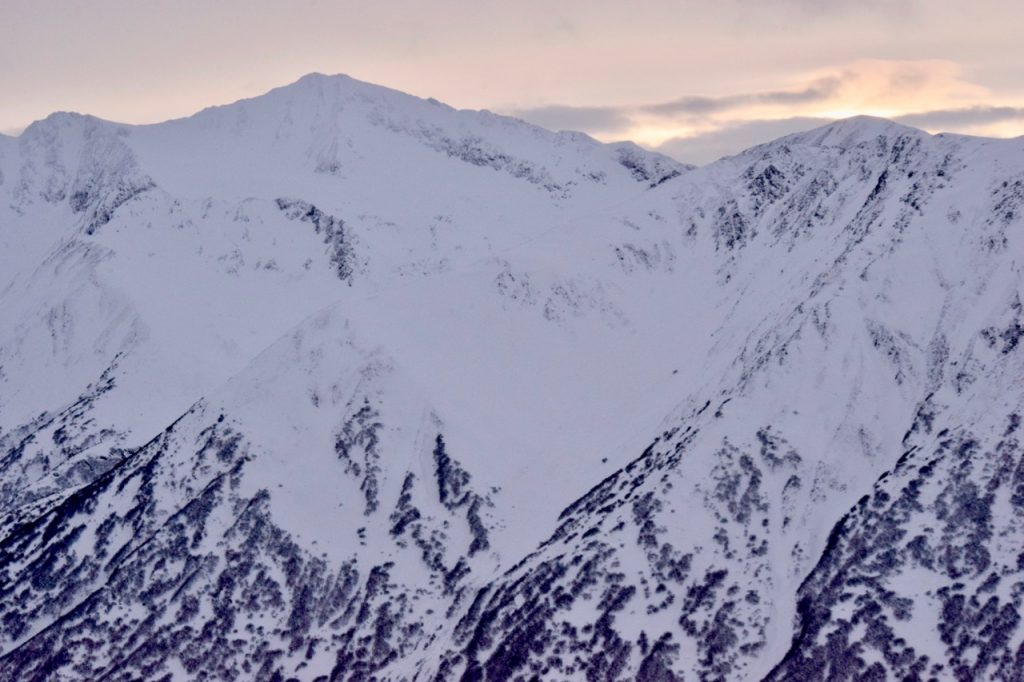 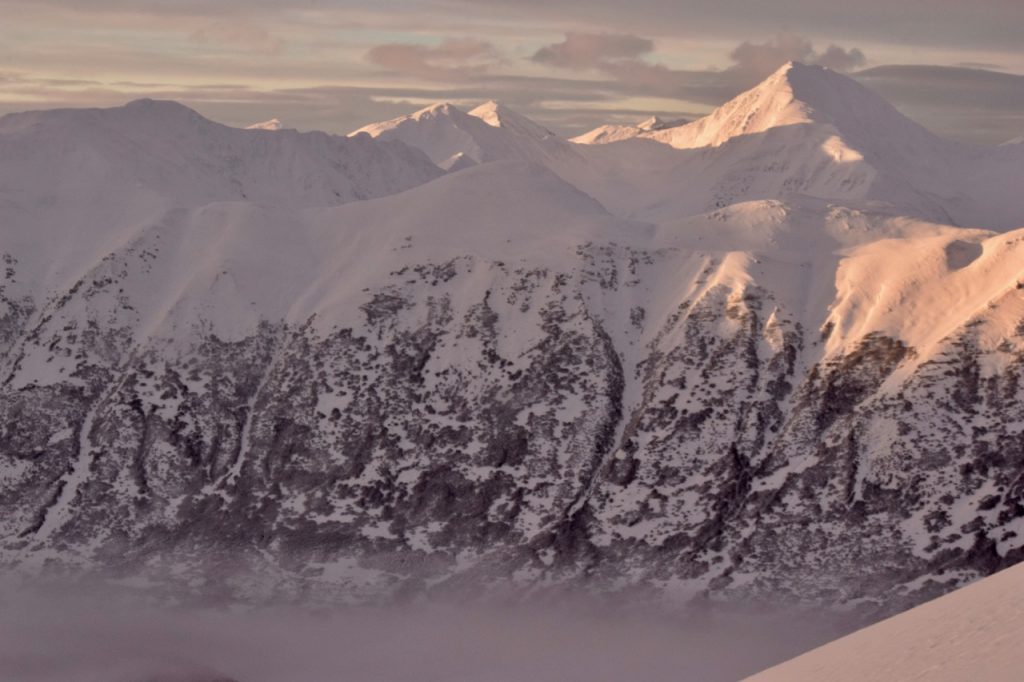 Seattle Headwall and Big Chief in the distance 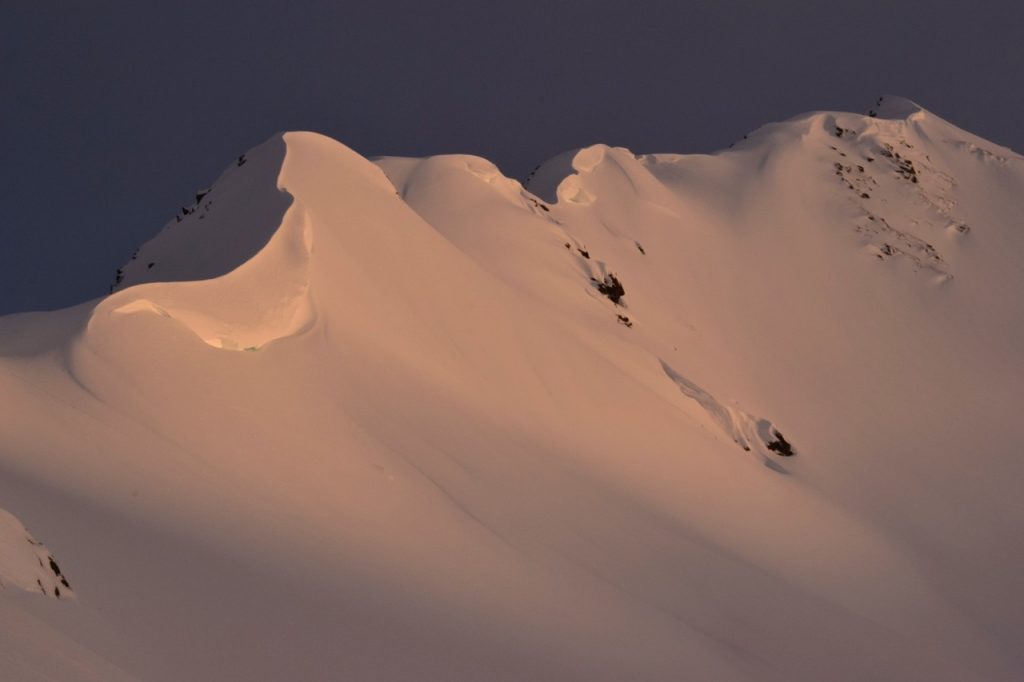 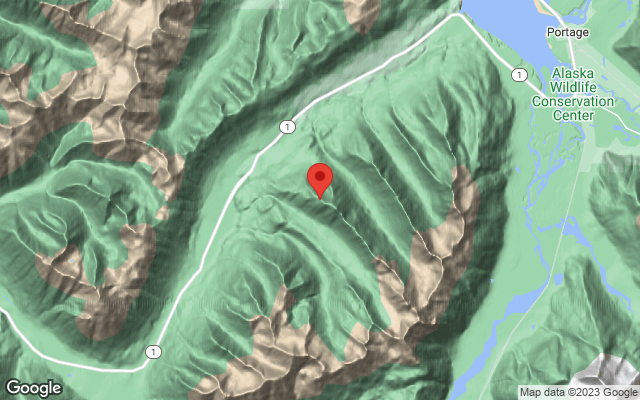