One very small release below a cornice on CFR ridge that may have been mid-storm; see photo below. Estimated max width was 5-10', running 50-75'

Minor skier triggered sluffing on slopes over 40 degrees below treeline.

Obscured or overcast skies with fog and light snowfall ending in the AM, changing to broken skies with occasional fog by the late afternoon. Occasional winds light from the NE in the AM and SE in the afternoon. Temps in the 20s.

Soft new snow on the surface along the entire route, and at all elevations and locations on the pass!

Below treeline, 8-12" of fist hard snow from the Jan 13-14 storm sat on either facets, a hard windslab, or occasionally surface hoar below 1500'. In hand pit tests, the storm snow block would fall apart after a few light taps in a compression tests, but it was cohesive enough in hasty shear tests to stay together in a block.

Above treeline, some mild wind re-distrubution had occurred, with 2-10" of fist hard soft snow on the surface, and occasional wind loaded locations featuring up to 2' of fist -> four finger hard storm snow. Hand pit compression tests at these wind loaded locations failed after a few taps from the wrist at the new/old snow interface, but with a resistant planar fracture character.

Parties that went to the top of Tincan Common and CFR reported occasional 'upside down' snow - maybe from wind affect - and more isolated small wind slabs at the ridgeline.

Pit @ 2900', SW aspect, 15 degree slope, Height of Snow = 160cm (see photo below)
This location - just off the uptrack - was chosen as it was slightly wind loaded during the storm.
12" of fist -> 4 finger hard decomposing snow over a solid 1 finger old snow surface.
CT3 PC down 15cm in the storm snow, CT5 RP down 30cm at the new/old snow interface, and CT7 PC in the storm snow.
ECTN under easy pressure at each of the interfaces above. 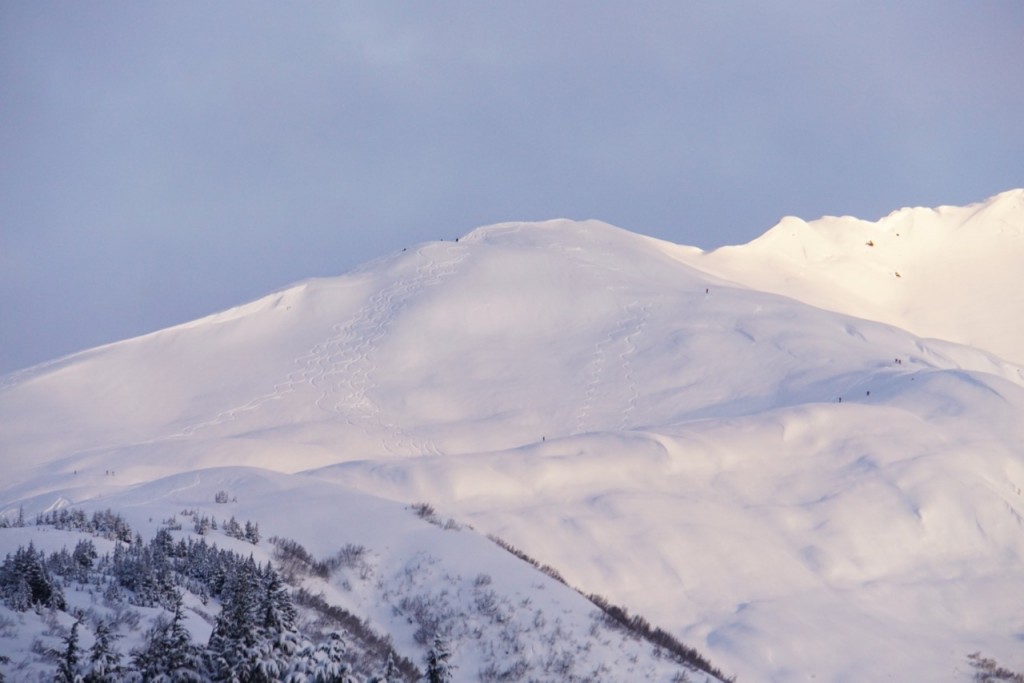 Common Bowl from the road by late afternoon. 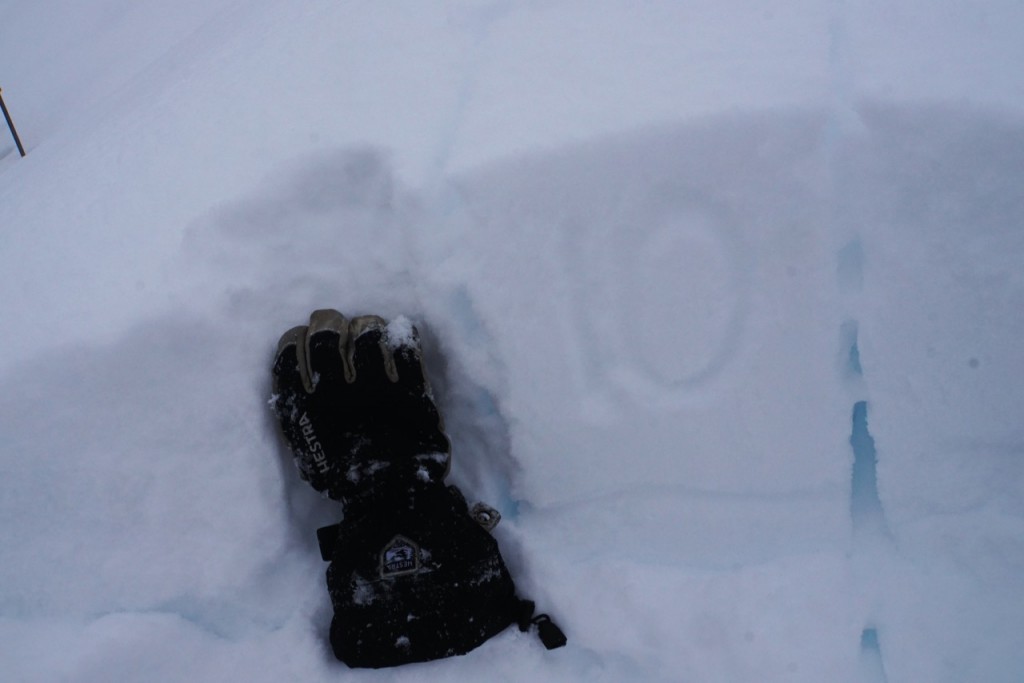 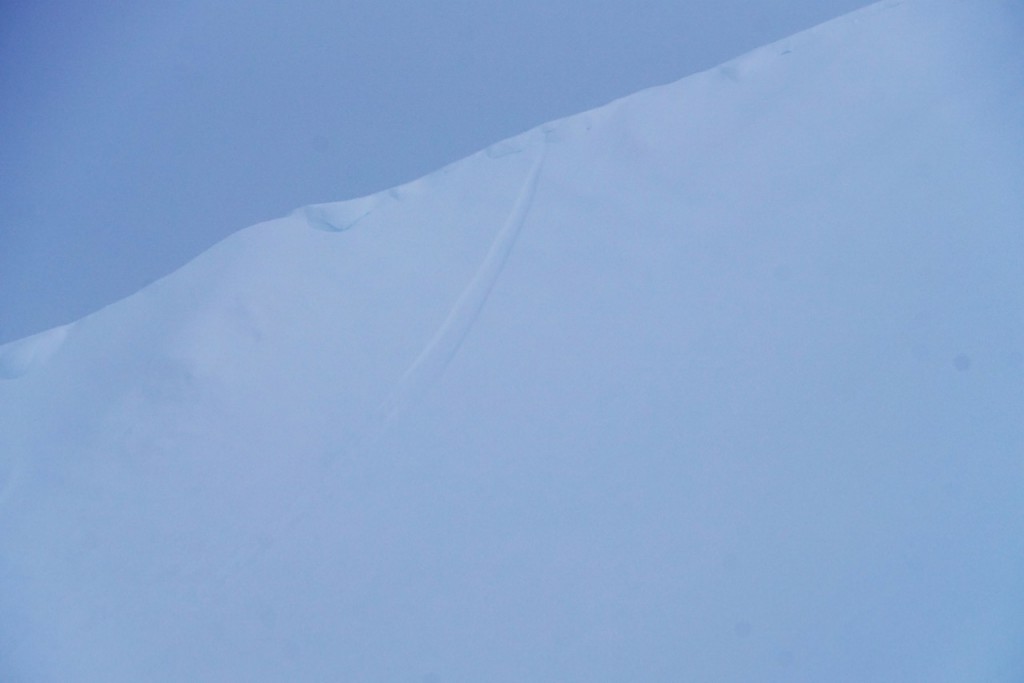 Small potentially mid-storm release under the cornice off CFR; maximum width estimated at 5-10', with a run of 50-75' 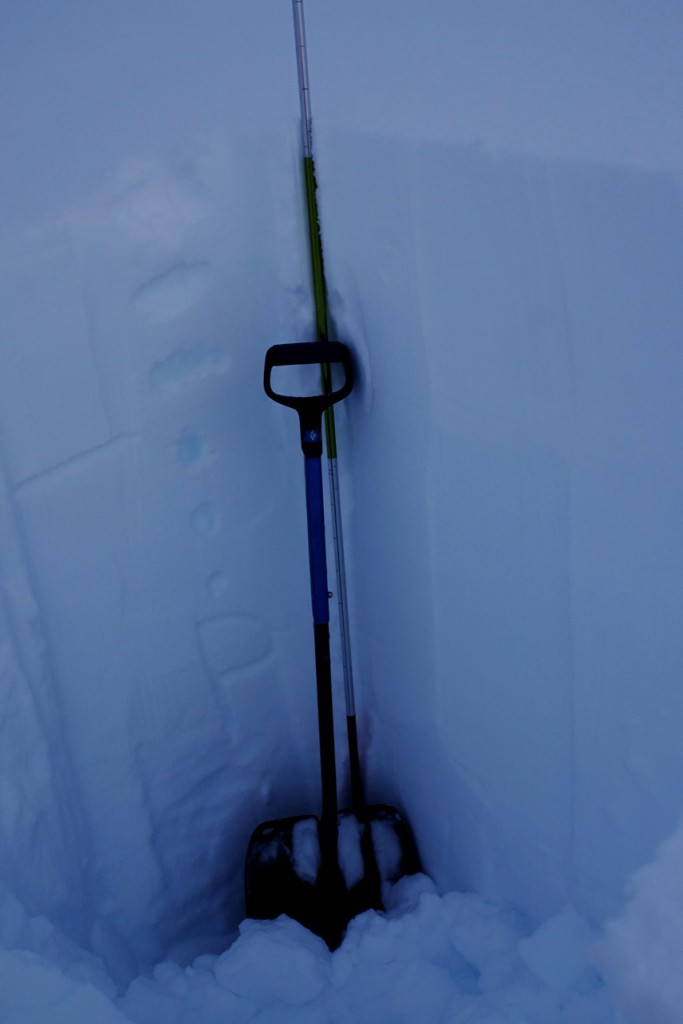 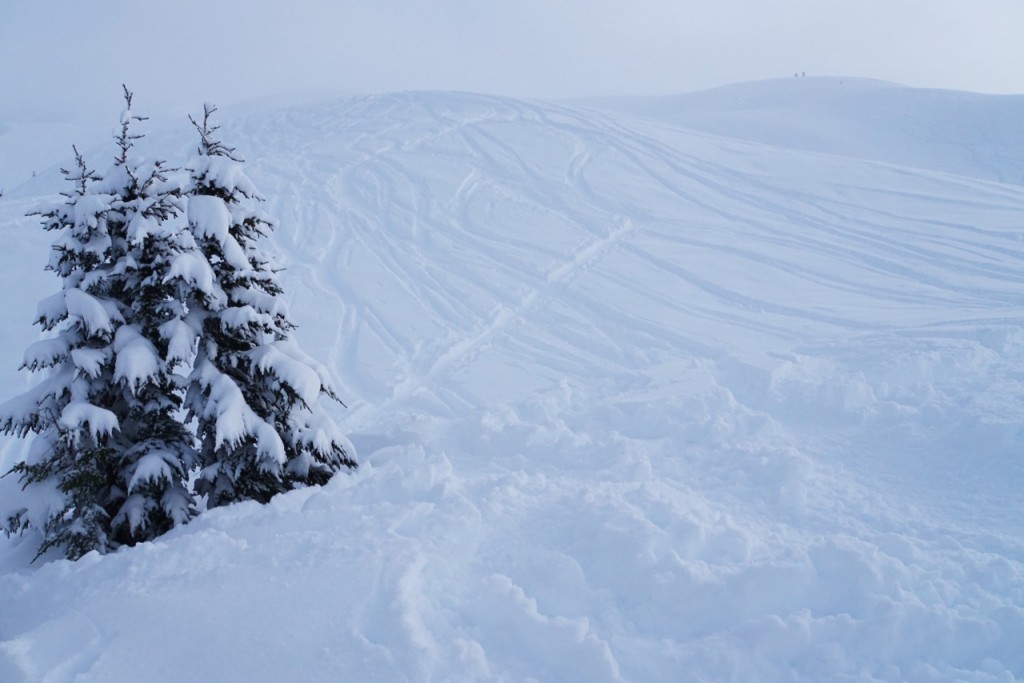 Snow and tracks at treeline. 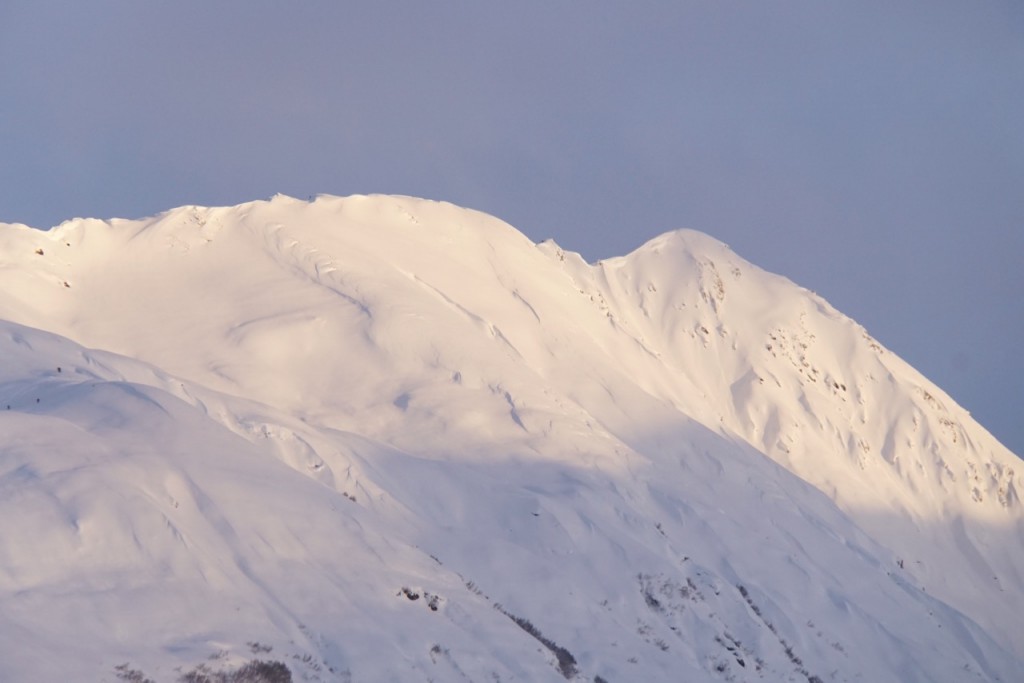 Tincan Proper and part of Hippy Bowl from the road. 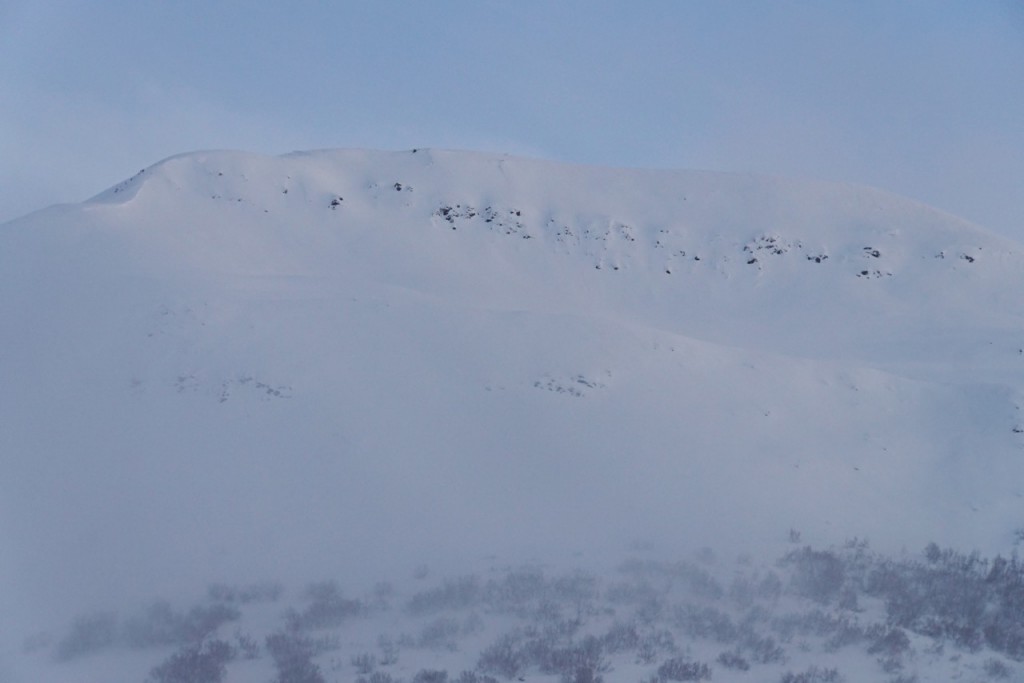 The road face of Magnum popped out of the clouds long enough for this photo! 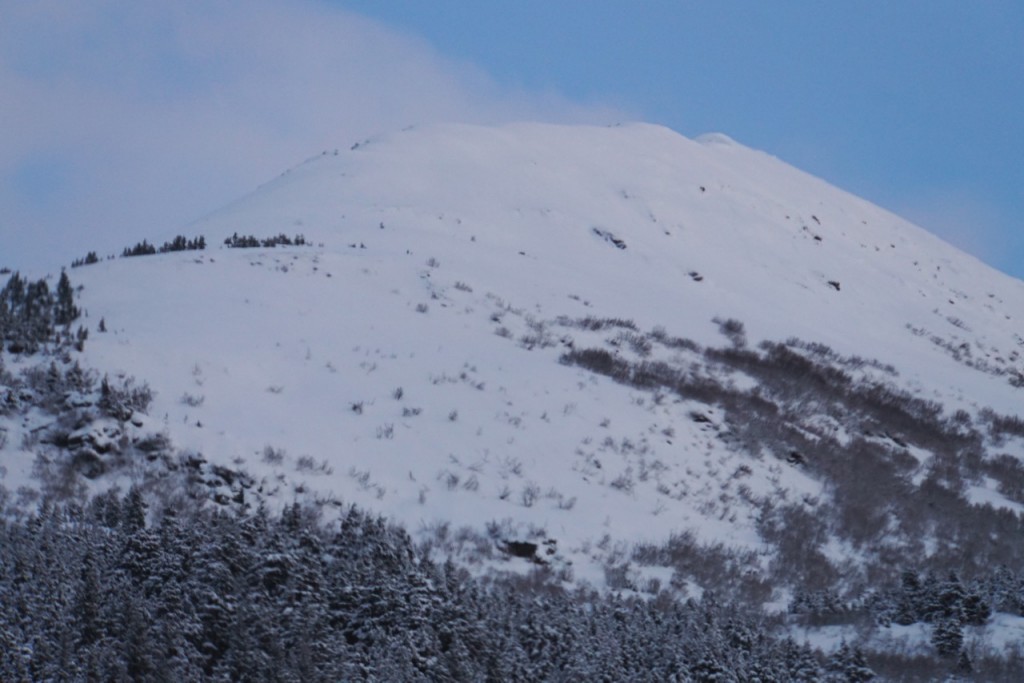 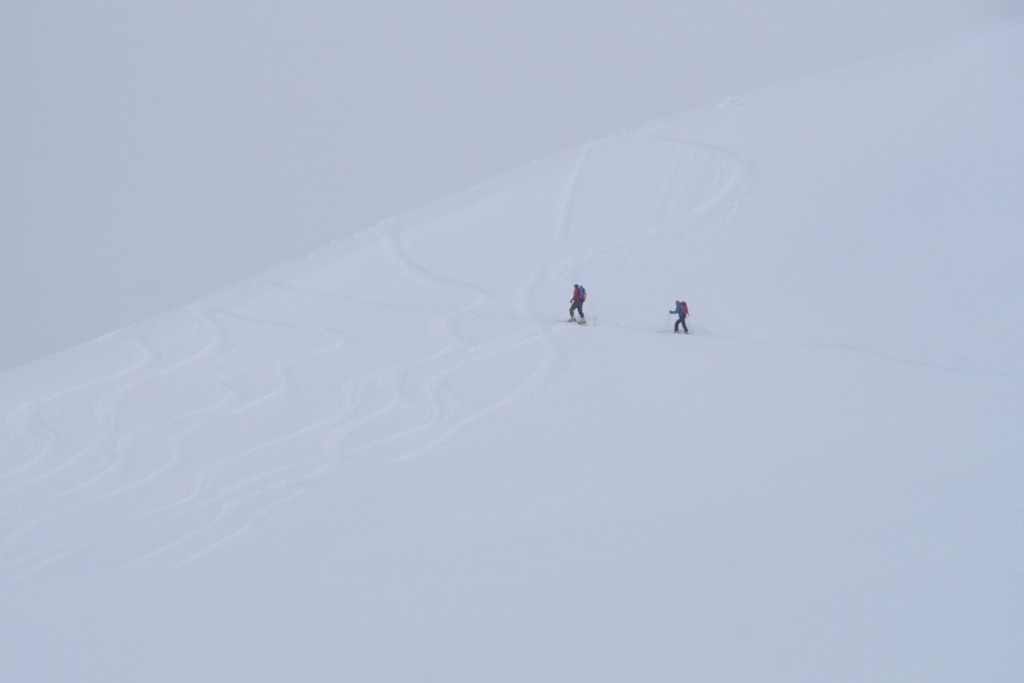 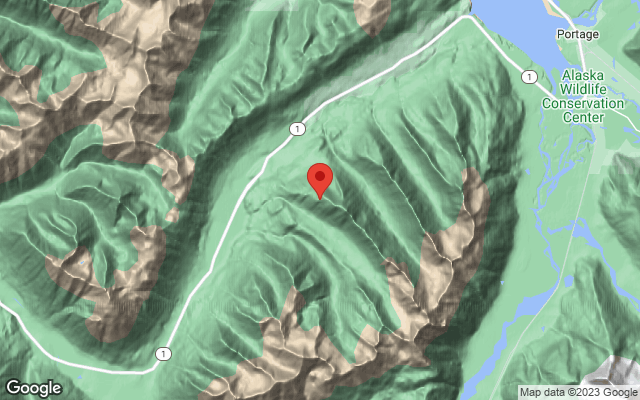