This report is a compilation of information from various sources as well as
forecasters’ field observations on 1/3. Visibility was very limited on 1/3 and
new snow covered much of the debris field, bed surface and crown.

Crown depth 4-10 feet. This is an estimate from a variety of observers.

Witnesses described the skier who triggered the slide as staying on top. It
sounds like the flow was laminar and the skier was not entrained or caught up in
the debris as it moved into a more turbulent flow. All other members of the
party were out of the runout at the time of the avalanche.

This avalanche produced sympathetic releases on adjacent slopes, most notably a
slope 500 feet above the initial release, as well as several steep slopes over
800 vertical feet below the initial release. Whoompfing and “earthquake like
rumbling” were felt as much as a 1/4 mile away from the slope that avalanched.

When dealing with deep slab instability, extraordinary caution is warranted when
approaching avalanche terrain. Paying attention to slope angle, potential
trigger points and terrain traps are critical. This avalanche occurred in a
popular area on a day where the visibility had recently improved and the hazard
dropped from HIGH to CONSIDERABLE. This day brought better skiing conditions
than had been experienced for a long time. It sounds like the group did a good
job of skiing one at a time and avoiding exposure of more than one person to the
hazard.

Human factors aside, this avalanche did not just happen. It was the culmination
of a season of weather that created the conditions for this to happen. October,
November and December saw extended periods of clear and cold weather. This
weather helped to create weak snow. Starting around Christmas a slab began
building on top of this unconsolidated base. By New Years day the mountains had
slabs ranging from 3-10 feet in depth. On January 2nd, a skier found the
precise point that tipped the balance, producing this large avalanche.

As time goes on, it will be possible for skiers and snowmachiners to travel and
play on a lot of terrain that is harboring a huge slab resting on a rotten
foundation. Some slopes may hold the weight of a group and see thousands of
tracks before the right trigger point is found. It is important for folks to
remember what is under their feet. It (the weak base) might be 10 feet below
them and they can’t do a thing to affect it. If a thin spot in the slab is
found, where the weak layer is closer to the person, an avalanche can release
and bring with it an enormous volume of snow, as was the case in this avalanche.

Unfortunately this problem will likely linger for a long time, with alternating
periods of dormancy and reactivation. Other events like this are possible for
the foreseeable future. 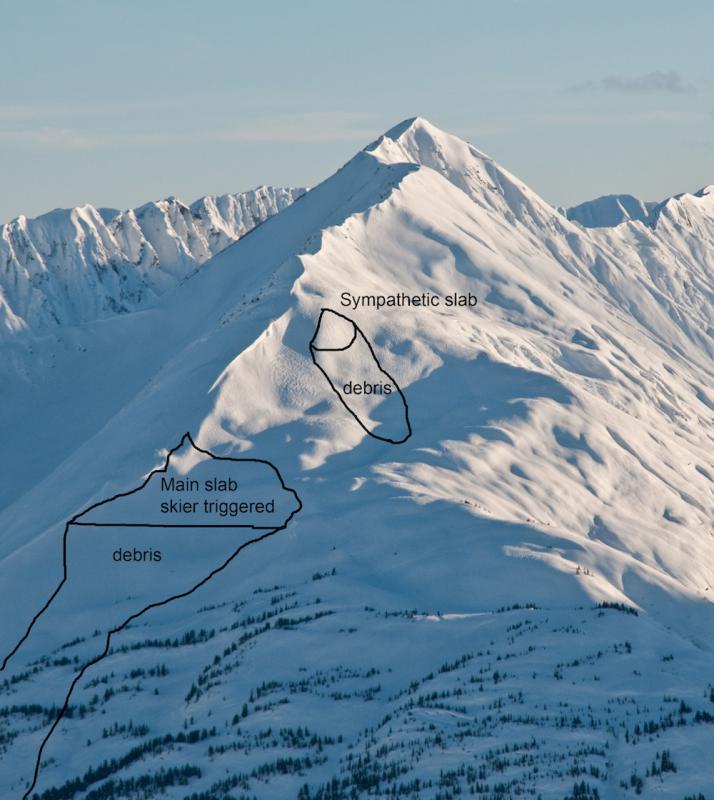 Photo is an estimation of avalanche. Main release slid several benches downhill into the trees. 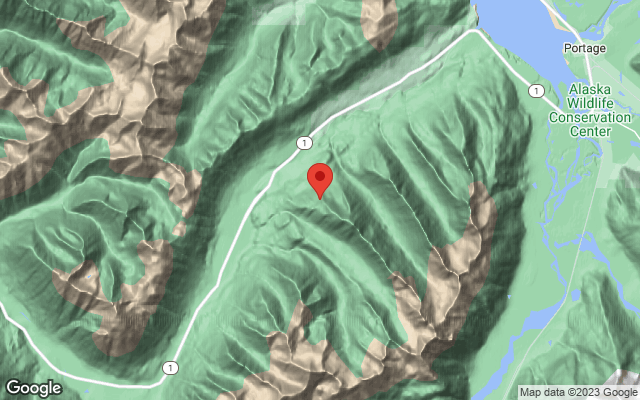