We skied around Tincan, with a high point of around 3000′ on top of Common Bowl. We watched multiple natural avalanches happen, remotely triggered another, and saw evidence of more activity that happened during the day while we were out. Needless to say, things were touchy and we stuck to low angle terrain. The avalanches were failing below yesterday’s storm snow, which was sitting on small (1-2mm) surface hoar and near-surface facets on top of a crust. Natural activity seemed to switch on shortly after the sun poked out.

Multiple avalanches today. Crown depths were consistent and around 14-18", comprised of the new snow from yesterday's storm. The avalanches were failing on small surface hoar (1-2 mm) and near-surface facets, which were sitting on a melt-freeze crust. We watched two natural avalanches happen, remotely triggered one from low-angle terrain connected to a steeper roll, and saw fresh activity that happened near the skin track between laps.

Plenty of avalanche activity. We also got one collapse on the skin track just below the ridge (SW aspect, approx. 3000' elevation), and saw shooting cracks on slopes that weren't quite steep enough to slide.

Overcast this morning, with increasing sunshine around noon, and clouds rolling back in around 4:00 pm. Winds were light out of the northeast, and temperatures were warm.

The day started off with dry snow on the surface all the way down to the parking lot, but solar aspects quickly became moist when the sun poked out. South aspects went first, but west aspects were soon to follow. We were getting pinwheels and rollerballs right after the sun poked out. There were natural rollerballs on the front side of Seattle Ridge earlier in the day, which was in the sun for most of the morning.

The new snow is sitting on weak surfaces and is very touchy. In addition to the activity already reported on Tincan, we also saw fresh activity on Eddies. We drove to Johnson Pass TH in the afternoon, but the visibility was never really good enough to see anything along the ridgelines.

Besides the weak grain forms below the most recent storm snow, it was also noteworthy that there was moist snow down to at least a foot below the 3/30 crust. 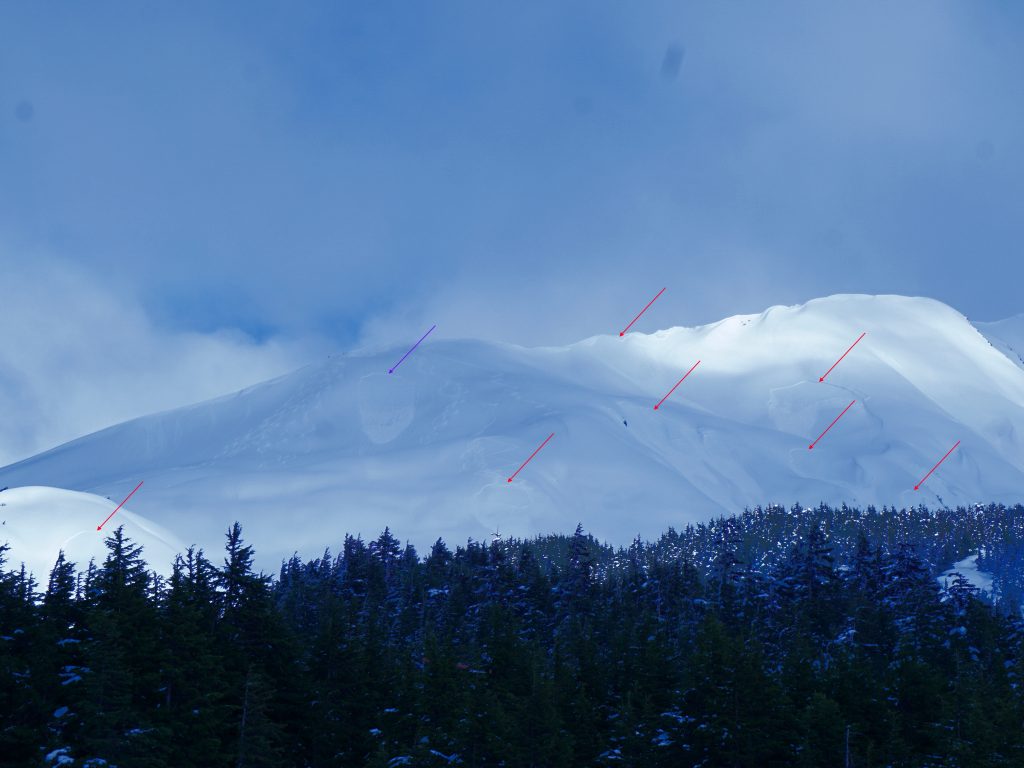 Looking at all of the activity from the Center Ridge parking lot. Red arrows are natural, purple arrow was triggered remotely from low-angle terrain connected to the slope that released. 04.02.2022

These slopes in Hippie Bowl all released naturally, at the same time. This happened shortly after the sun popped out, and it is likely that one of the pockets released and triggered the rest sympathetically. W-SW aspect, 2800-3400' elevation. 04.02.2022 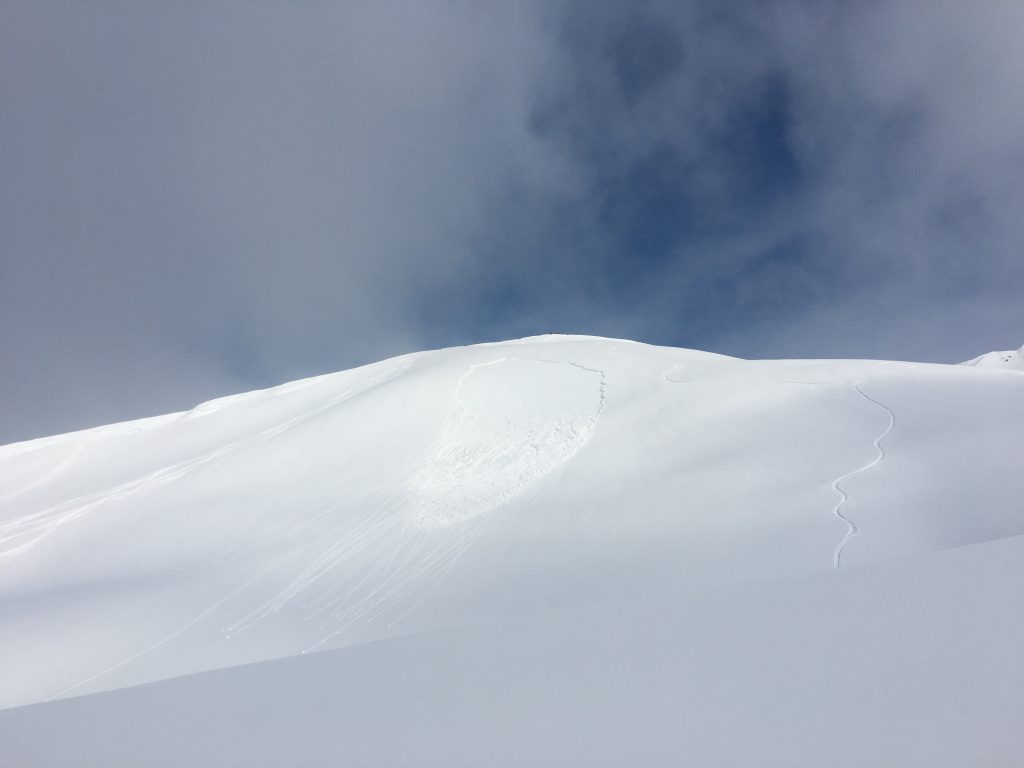 Remotely triggered avalanche in Common Bowl. I triggered this avalanche from the low-angle ramp near the skin track to the lookers right of the pocket that released. WSW aspect, 3000' elevation. 04.02.2022 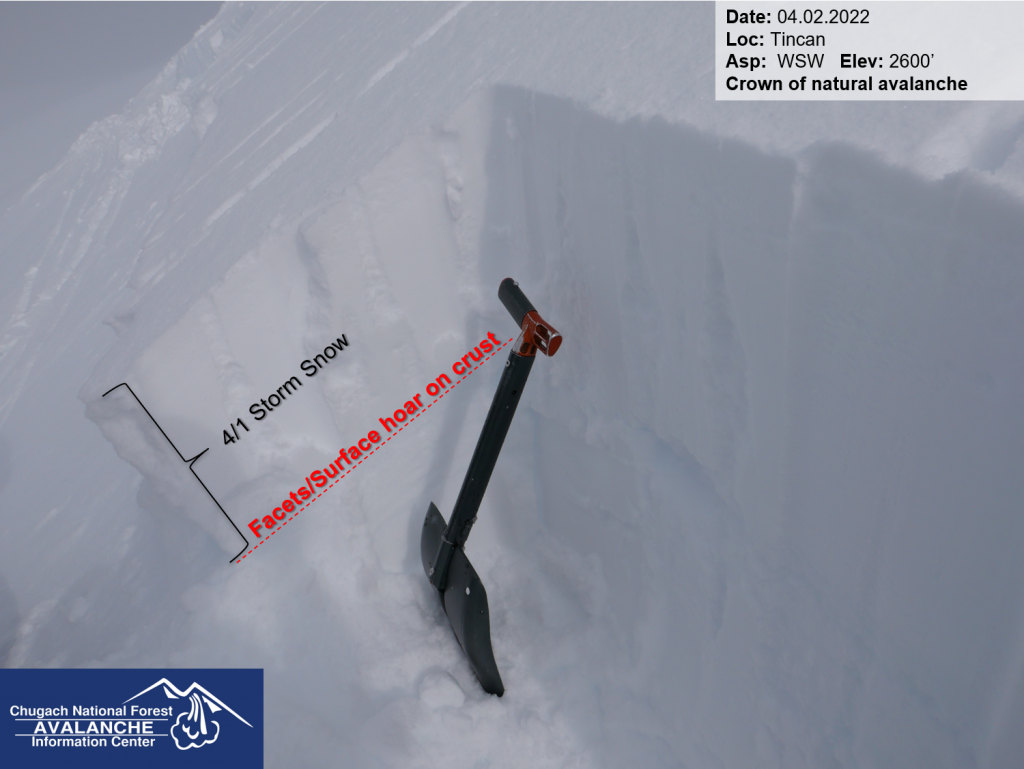 We dug a quick pit at the crown of one of the natural avalanches to get a good look at the bed surface. It was hard to see with a naked eye, but under the lens there were clearly small surface hoar grains, along with near-surface facets on top of a crust. 04.02.2022 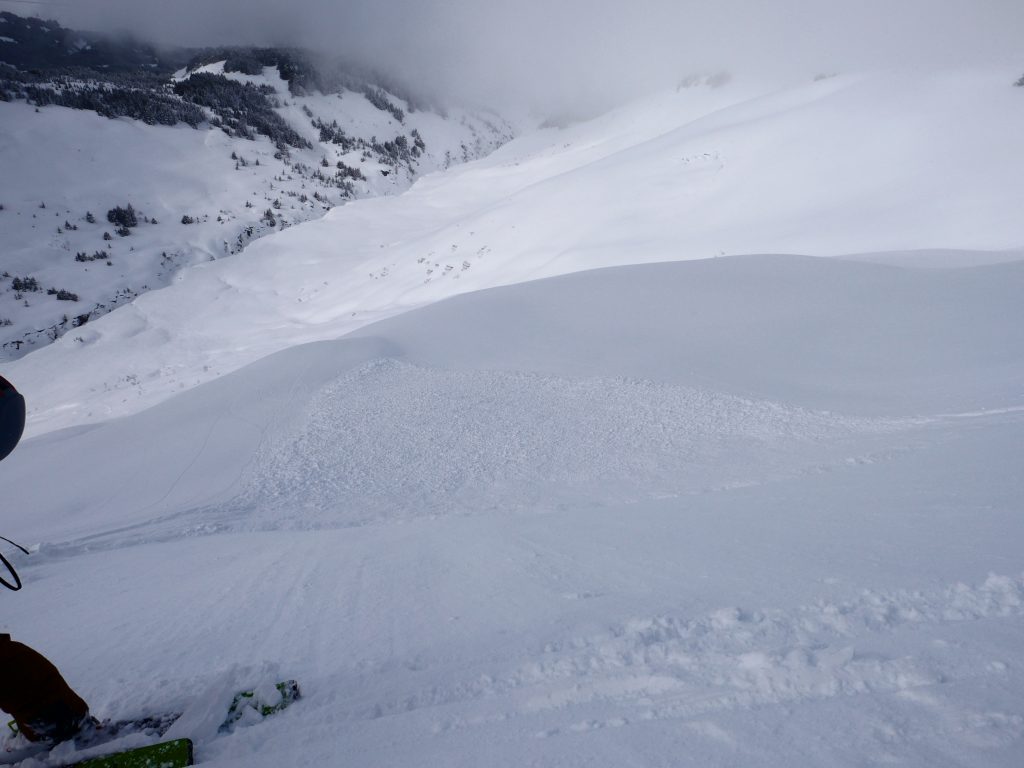 Looking down the path of a natural avalanche that we watched release from a distance. 04.02.2022 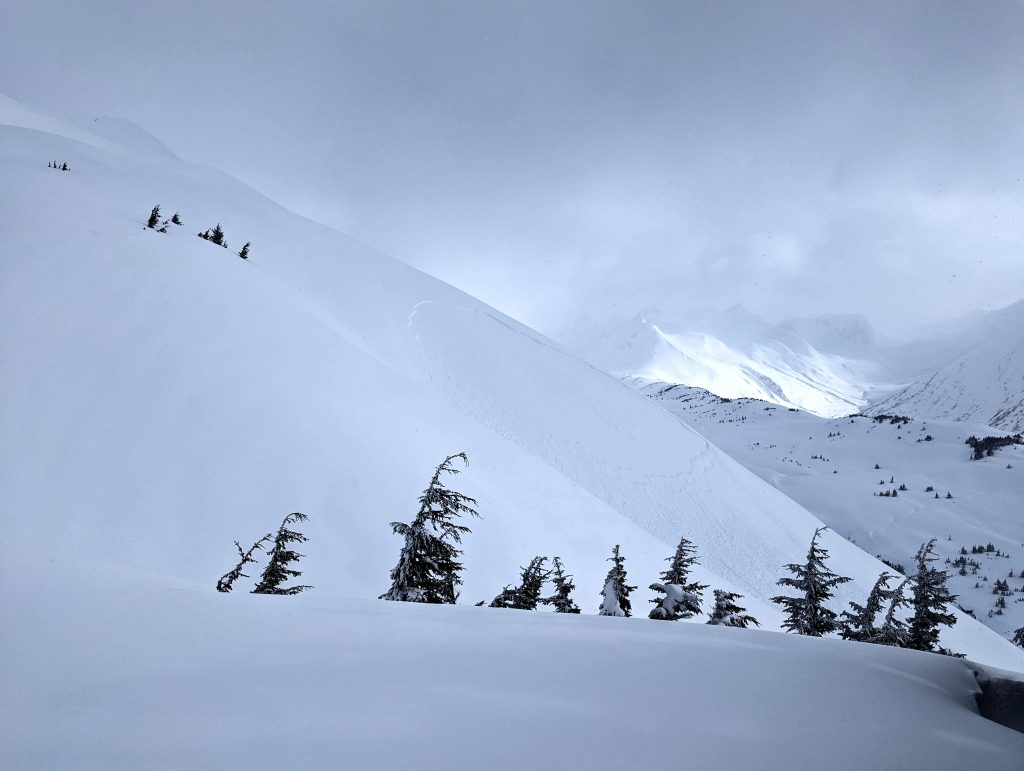 This slope released naturally while we were out. We didn't see it slide, but it wasn't there during our first lap on the skin track and it was there on our second lap around. Photo: Matti Silta. 04.02.2022 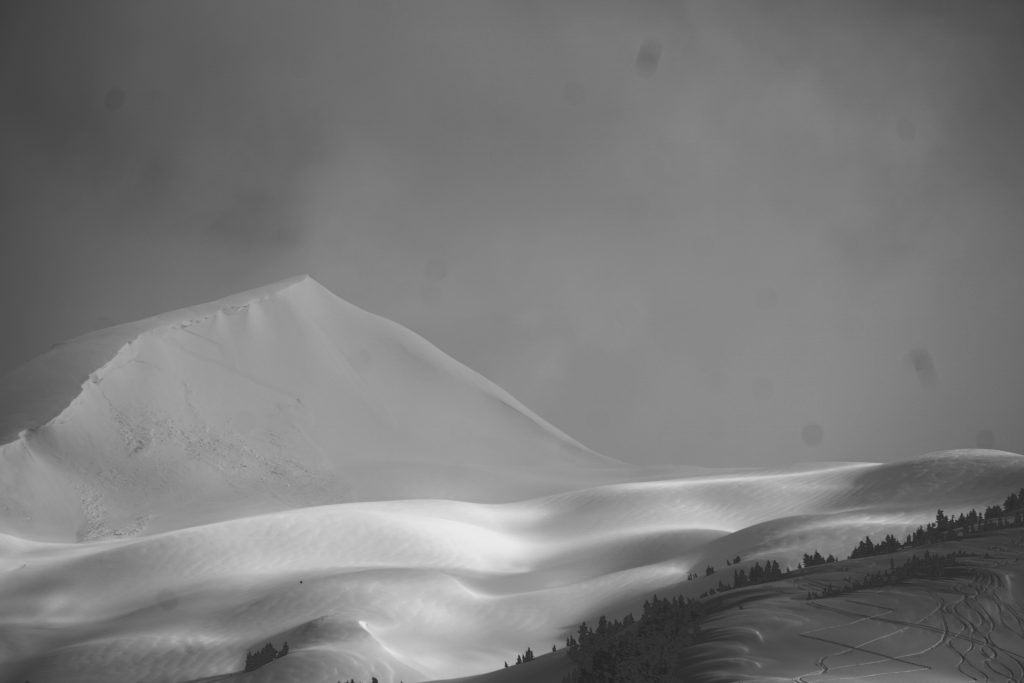 Multiple recent generations of debris on the Eddie's headwall. It looks like part of this slope may have released today, but was hard to tell with poor light in the afternoon. Photo: Adam Rothman. 04.02.2022 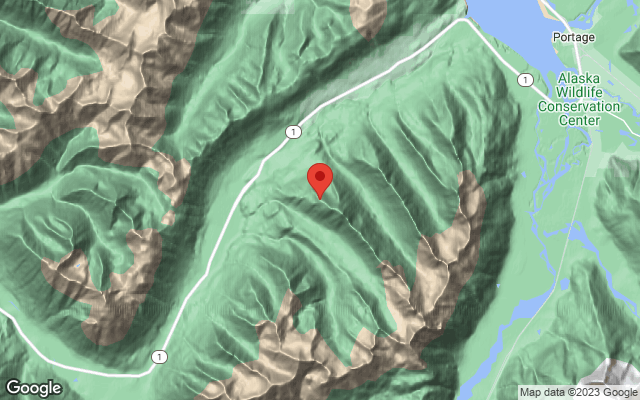