Ascended to 2660′ veering slightly South off the standard uptrack and descended the trees. The most significant wind affect I have seen all year in Turnagain.

Shooting cracks and a small shallow wind slab was triggered off a Northerly aspect near treeline. Photo below. This hard wind slab failed on decomposing/broken stellar dendrites over a melt freeze crust and occurred in an area where the snow was pretty thin as this area has been getting scoured most of the year.

Upper 30s F at valley bottoms decreasing to 20s at ridgetops. It was the first day out touring this year where I wished I had worn a T shirt! Light winds the whole tour along our mid-elevation route. Clear skies. No precipitation.

Roughly 7" of settled snow from Feb 12th. Below treeline there were many signs of wind effect on South and West aspects, but the snow surface was still soft with only some areas having 2" wind crust. Little wind effect noted on East and North below treeline. Above treeline, the snow was heavily wind affected with wind crust, wind slab, sastrugi and anti-tracks, which also made for challenging ski conditions.

Given all the signs of wind texturing, we were surprised to find wind slabs were more isolated and surface clues didn't always point to where they were, instead we often found light wind effect and settled powder.

Wind effect in Turnagain Pass in general was most noticeable on the non-motorized side of the road, with wind affect visible on nearly every peak.

A few hand pits failed easily (5-7" down) in the trees on either the Feb. 5 BSH or new/old interface in areas where there was more of a wind slab. Above treeline hand pits failed on isolation, easy, and under moderate force on the new/old interface (down 5-9"). Sometimes these failures were clean and planar, and other times they were rough breaks.

We dug a pit at 2660'. See pit profile below. We found the Jan. 21 BSH 65 cm down, as well as what we originally thought was the Feb. 5 BSH (see the thin gray line in the photo below) but turned out to be a thin 1cm layer of very low density, intact stellar dendrites sandwiched between a 4F wind slab and thin, dense 1F layer of snow. 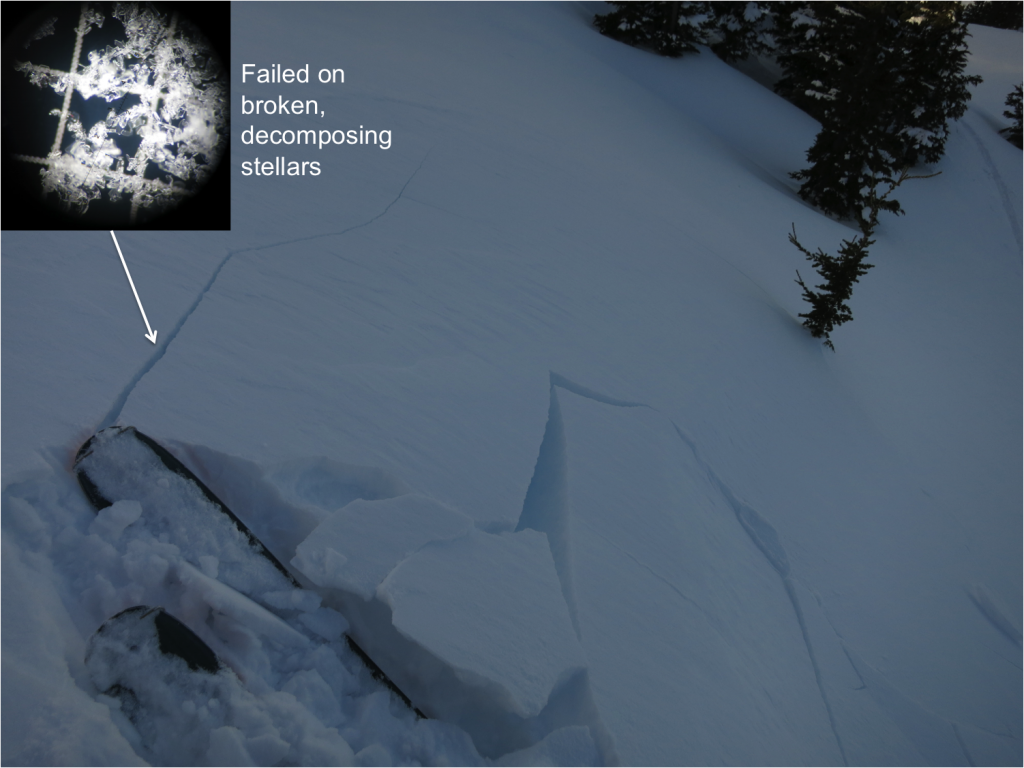 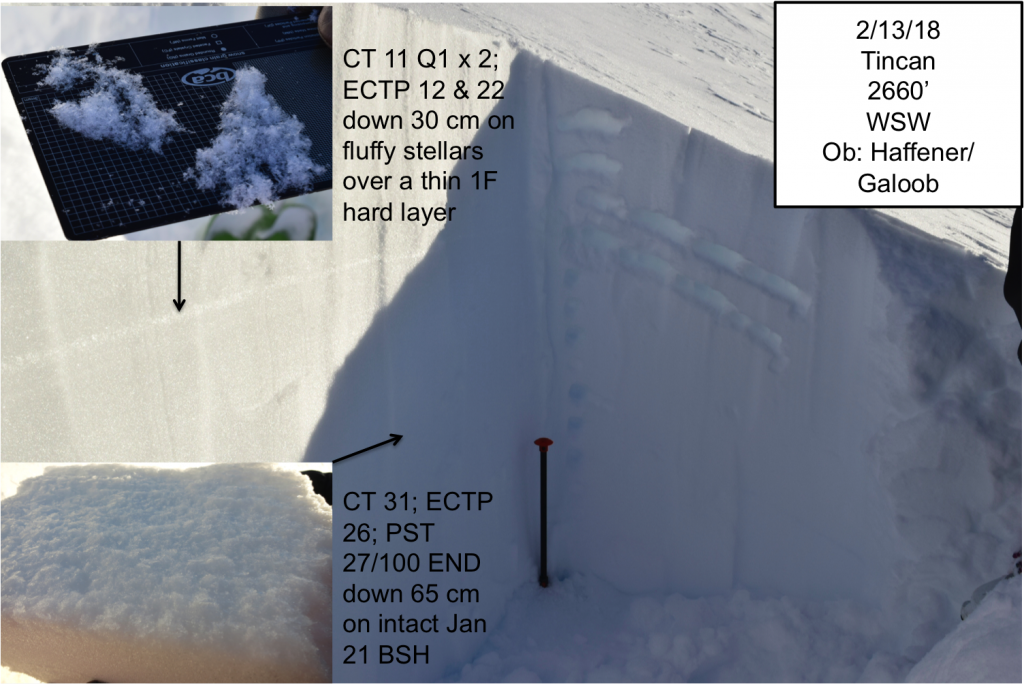 Snowpit at 2660' showed propogation potential on intact stellars down 1' and intact Jan. 21 BSH down 2' 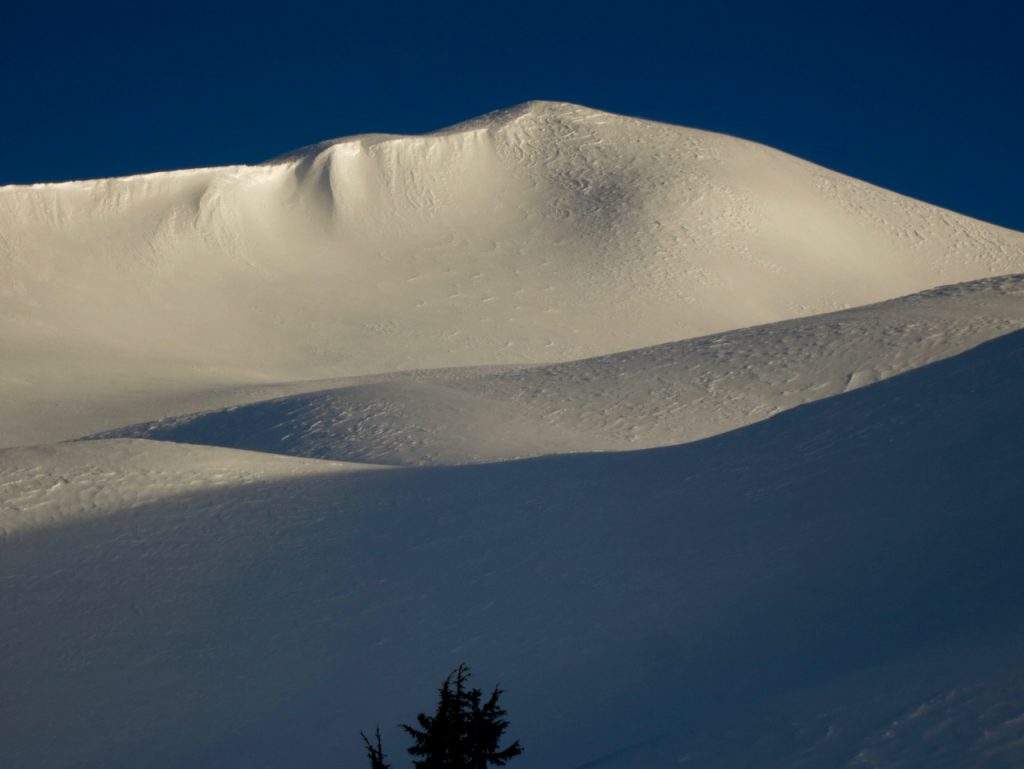 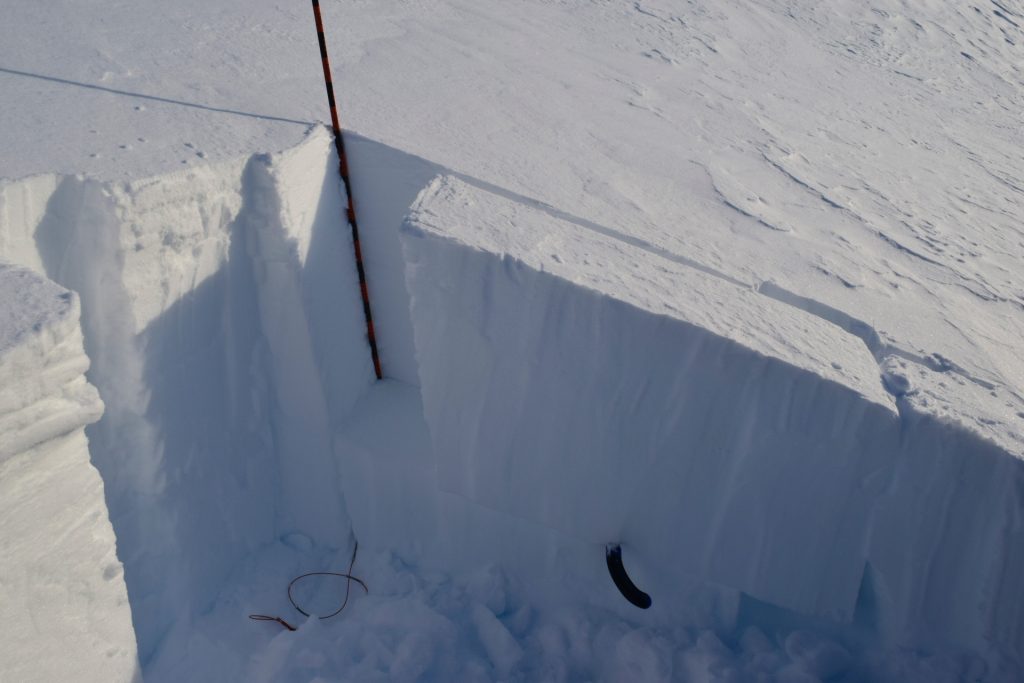 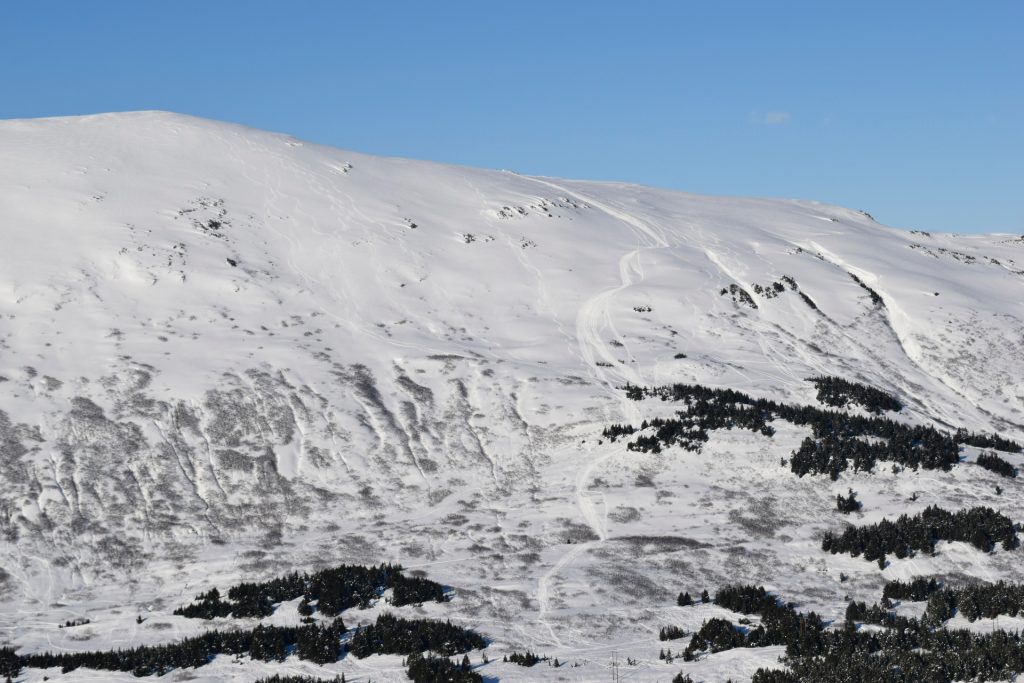 A lot of tracks were put down on Repeat Offender without incident. Sluffing observed from steep ski turns. 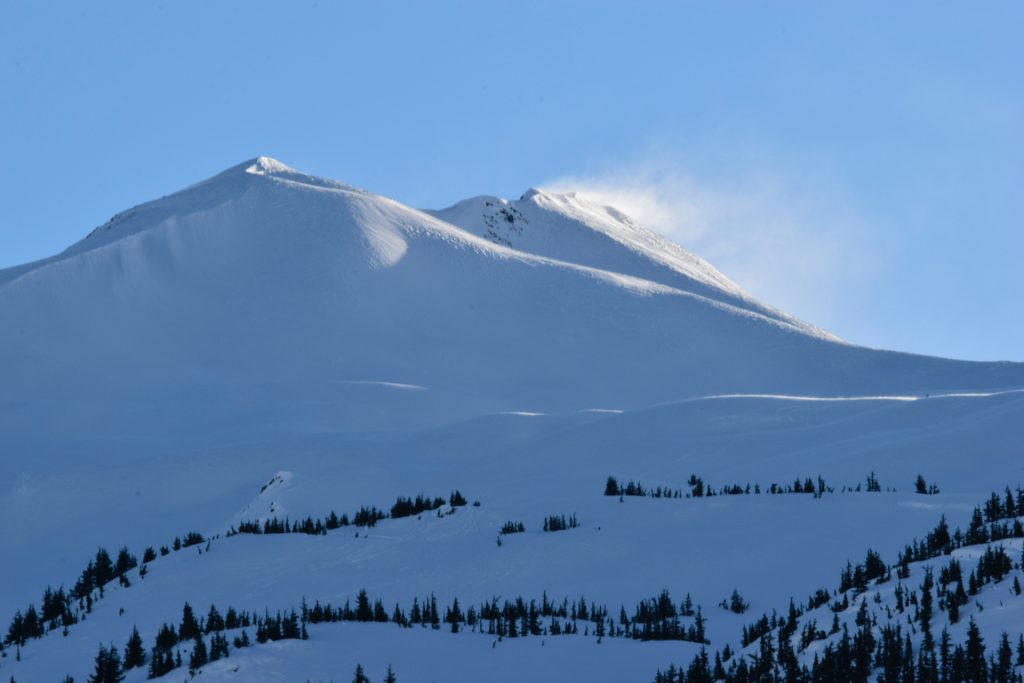 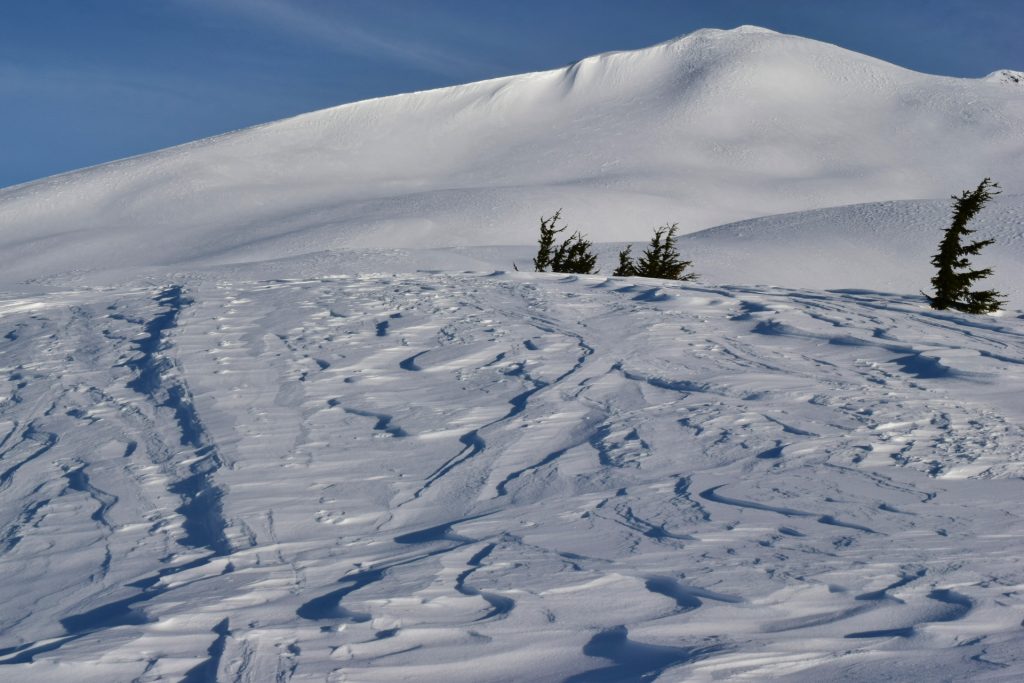 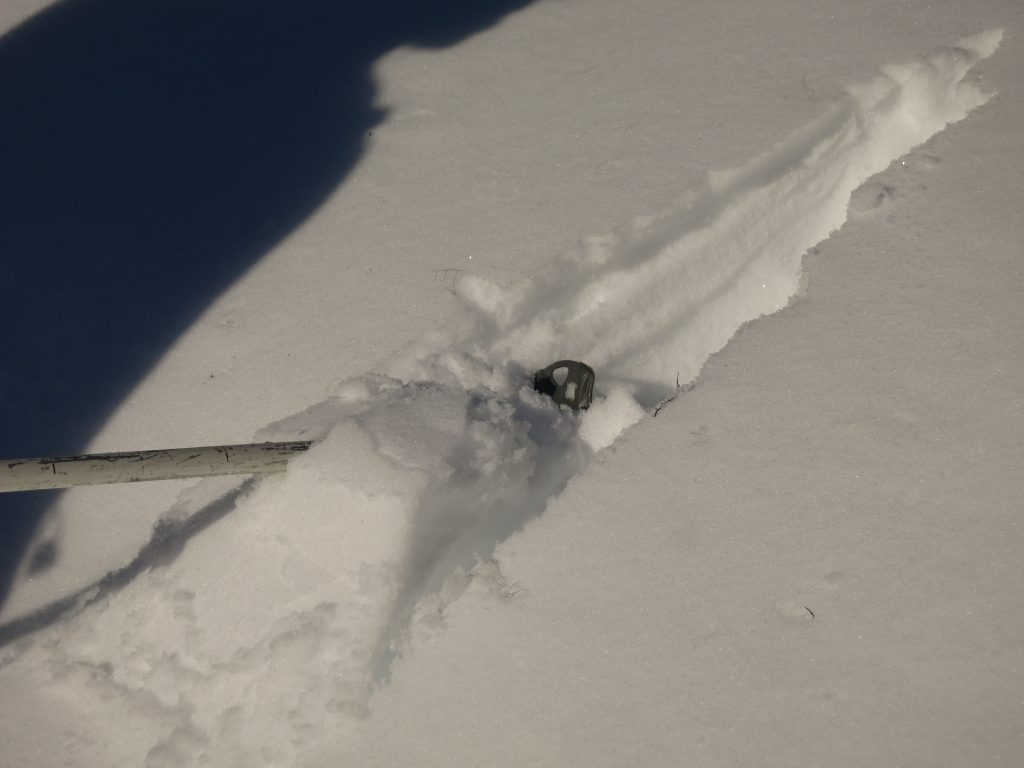 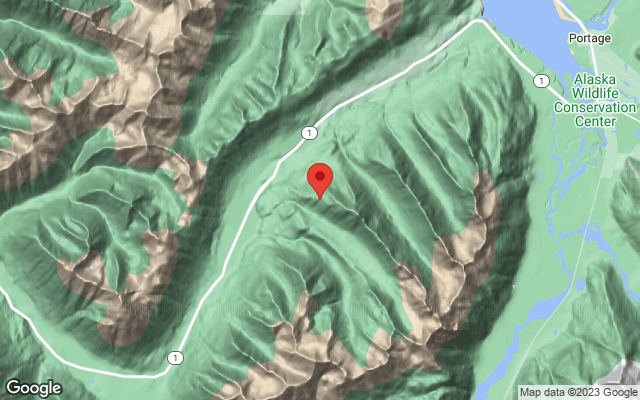