Standard West route to 2700′. There was on average 20″ of low density new snow from overnight. We didn’t experience any obvious signs of instability, but spoke with a group who said they heard two load ‘whumpfs’ at 2700′ just before the shoulder between Common Bowl and Hippy. We found the (1/21/18) buried surface hoar layer in all of our hand pits and test pits, but the slab mostly fell apart during our tests. With elevation this new snow became slightly denser (still fist hard) in the alpine where you could see some wind affect on the surface. In general the slab was very weak and not cohesive enough to form a slab. This will be something to pay attention to in the coming days as the slab settles or if we get more winds to make it more cohesive. Basically today we skied right through the slab to old snow snow surfaces below it.

We could see evidence recent mid to late storm slab and loose snow avalanches. The most significant were three larger slabs on SW aspect in the Twenty mile drainage, all D2 in size. There was also a storm slab (possibly from the moderate winds late storm on the steep rollover on Common Bowl.)

Whumpfing was reported by another group

20" new snow - pretty consistent from parking lot to Treeline. Slab depths varied above 2300' (15"-25") where winds during the storm moved snow around in the alpine.

We were targeting the buried surface hoar and near surface facets that were buried by a few inches of snow earlier in the week prior to this storm.

Pit at 2300, SE aspect, HS=130cm, 22* slope. The slab was very weak and fell apart and compressed in our Compression Tests. We did find the 1/21 buried surface hoar layer down 50 cm and near surface facets below on a crust 65cm below the surface. See pit photo for more info.

Pit at 2700', W aspect, HS=330cm, 29* slope. The slab was slightly denser, but still within the Fist hard density. Compression tests failed with easy to mod scores (CT3, CT11, CT12) on the 1/21 buried surface hoar layer down 45cm from the surface. The slab fell apart during the Extended Column test. We then performed a PST on the BSH and it failed 20cm/100 End. 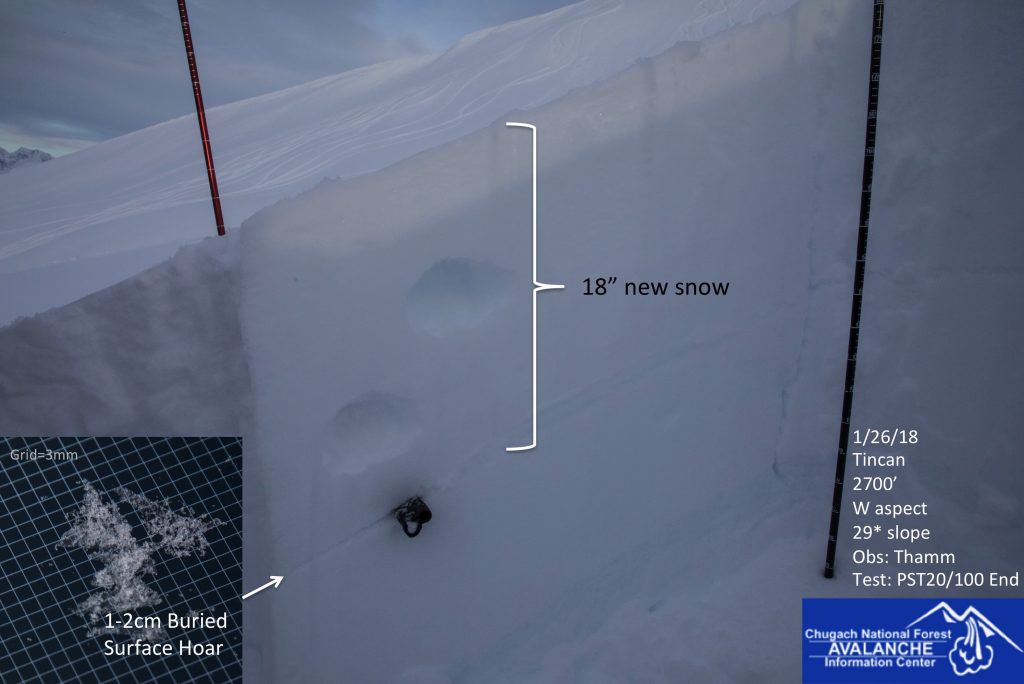 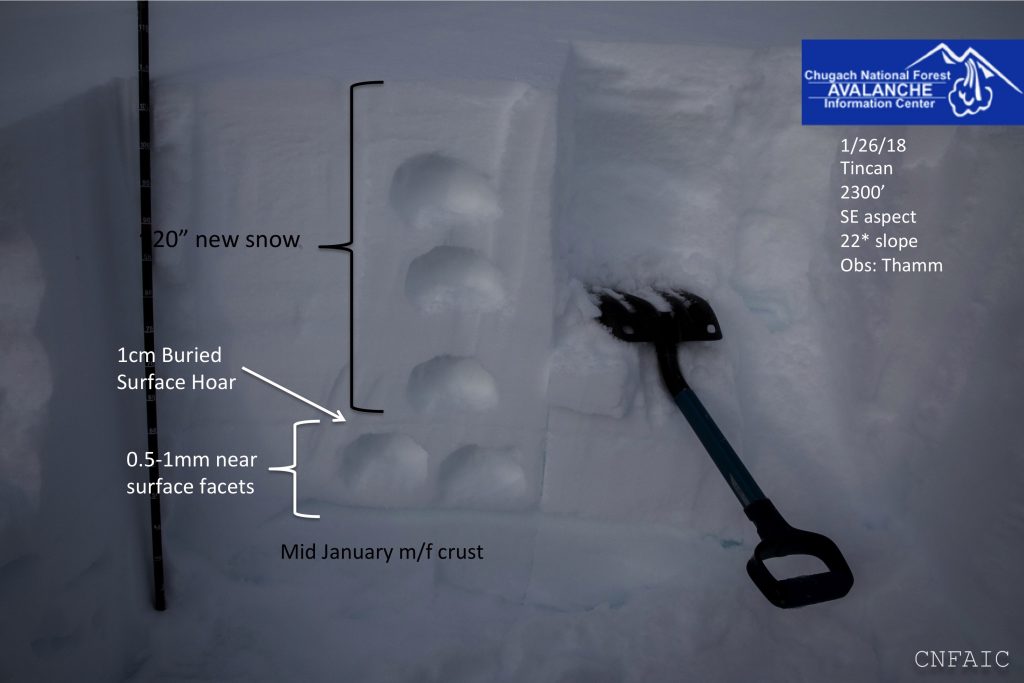 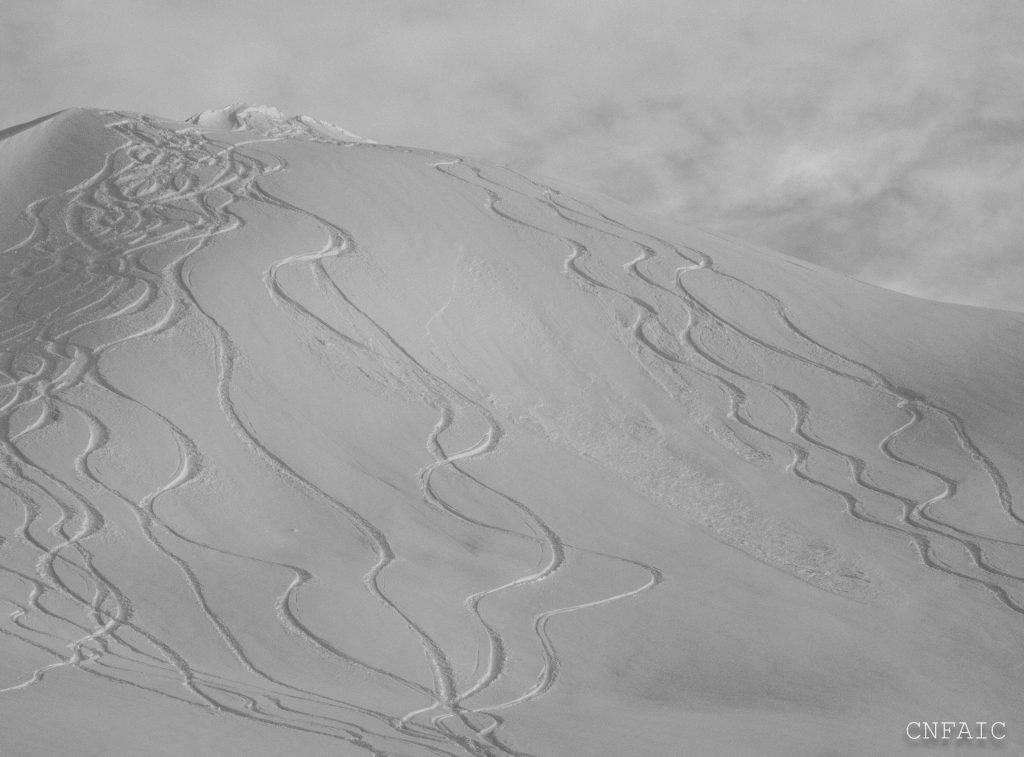 people were tracking up Common bowl with out incident. Evidence of a shallow wind slab mid-late storm 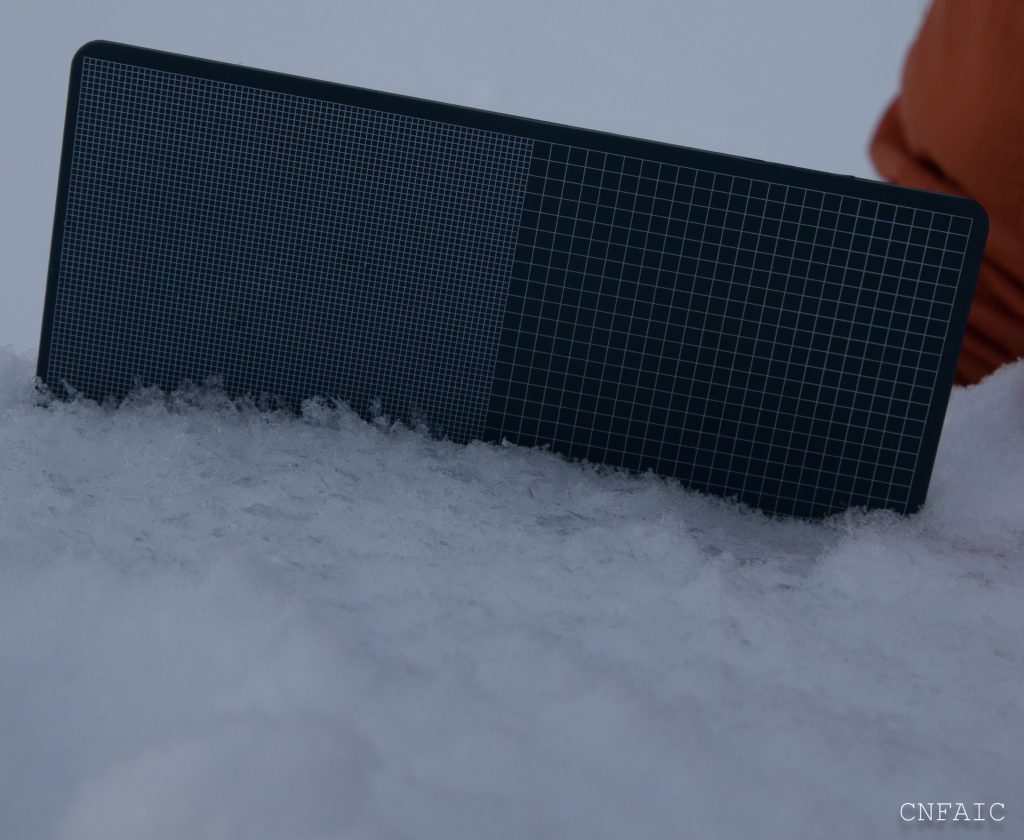 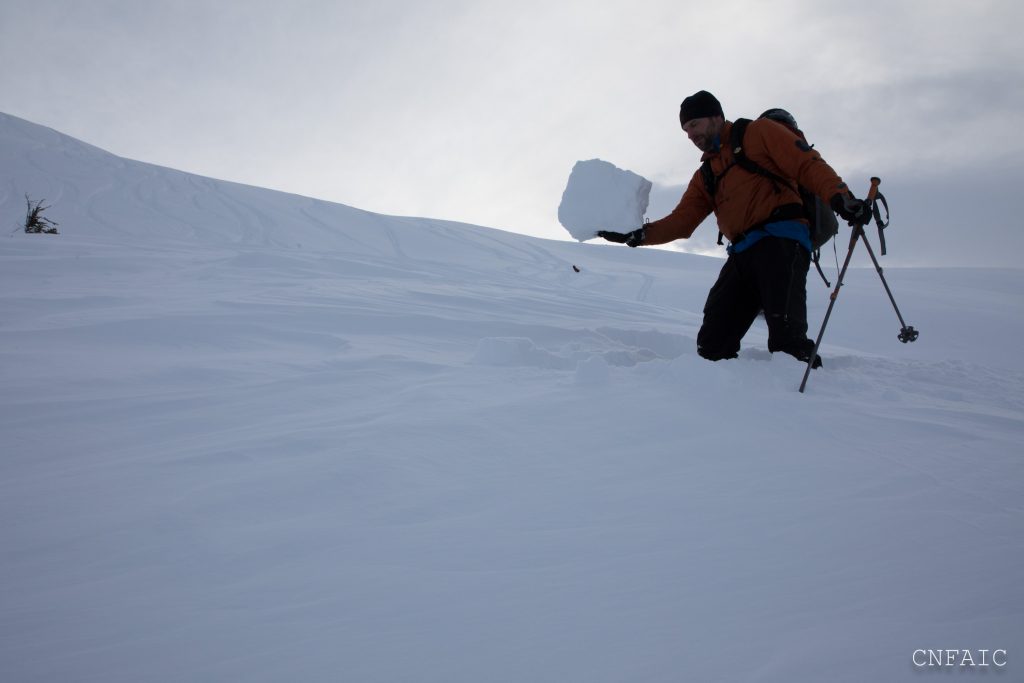 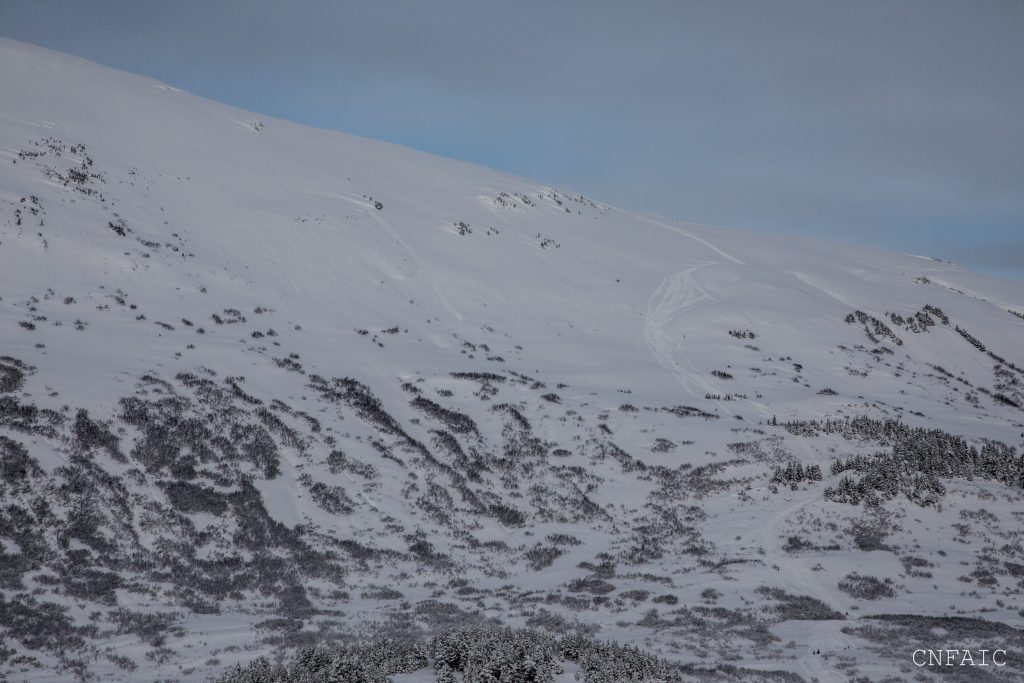 View of the uptrack in early afternoon. 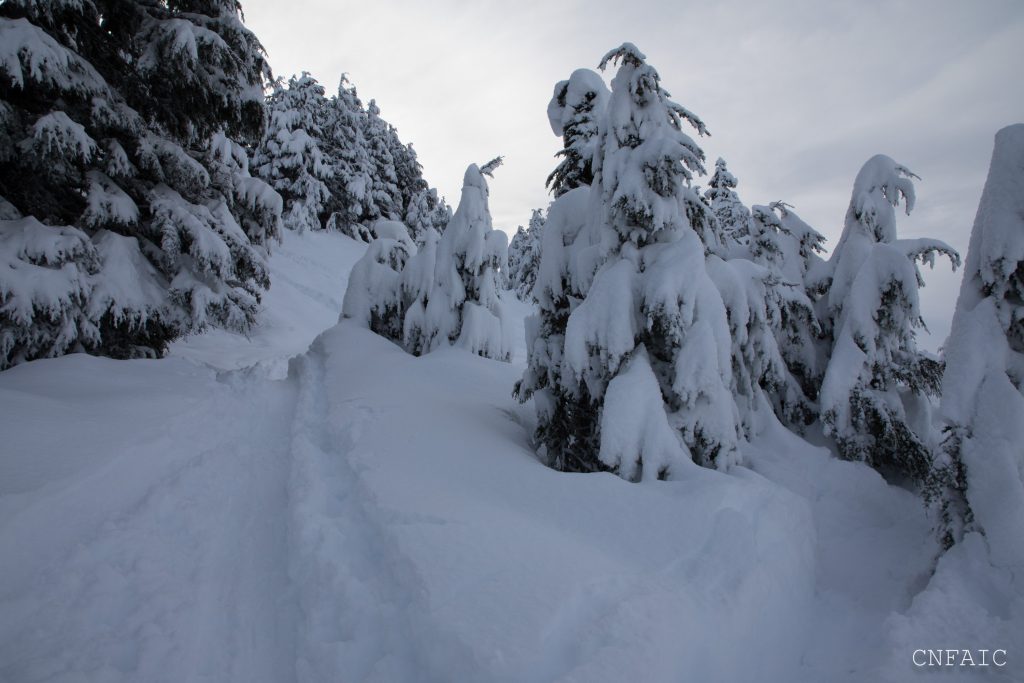 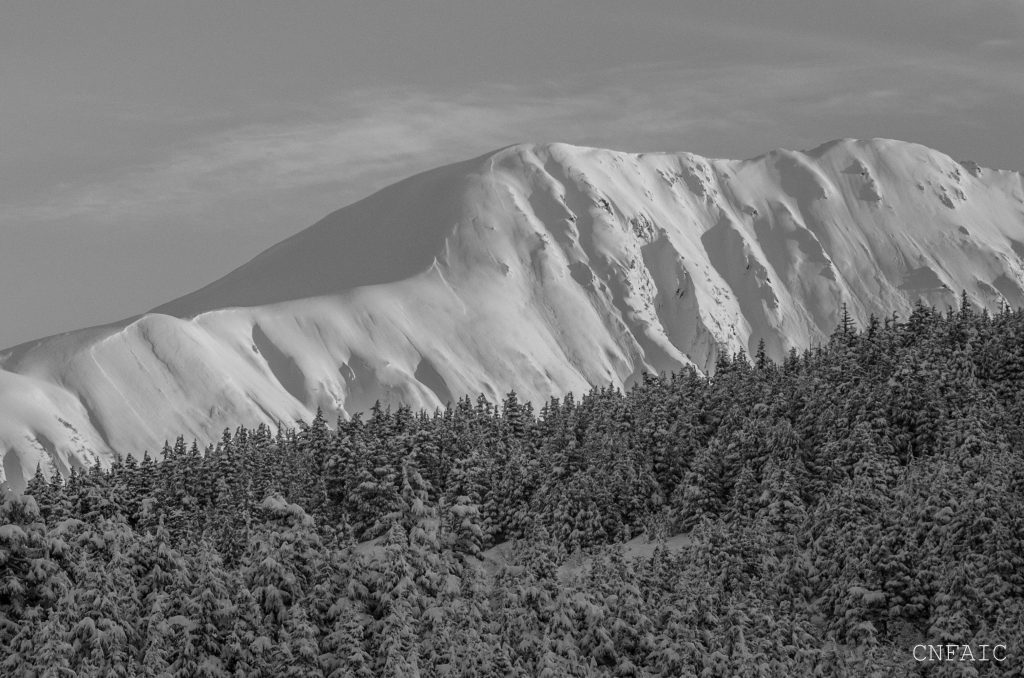 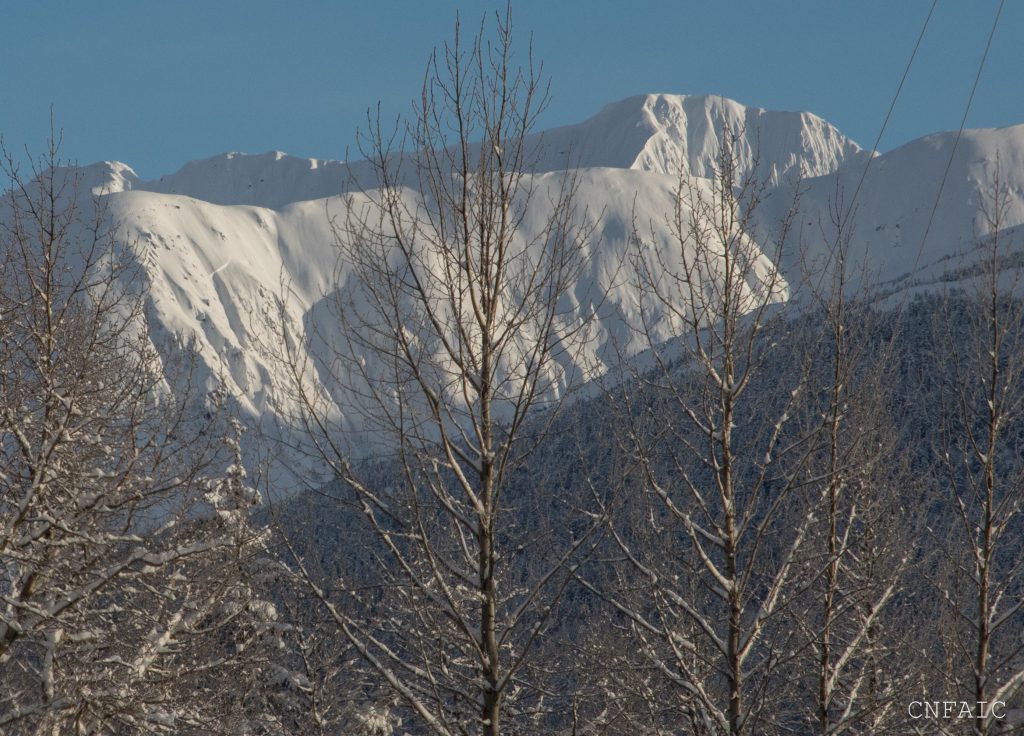