Wind was the only red flag of the day. Some cracking while touring but nothing longer than 2 meters and only on harder wind slabs.

Broken skies quickly turned to overcast, with some obscured skies later in the day. Cloud level dropped throughout the day.
11:30am @ 3500' calm to light winds from the south west, temp -4 celsius. no precipitation
12:20pm @ 4300' light to moderate winds from southwest, temp -7.5 celsius. S-1 rimed particles
Blowing snow could be sign along ridges and terrain features starting at mid elevations.

Below 3500' was a mixed bag, snow was mostly wind pressed, with some areas of fist hard snow right out of the parking lot. Above 3500' snow was much more wind effected. The snow surface was highly variable just bellow ridges, with snow being eroded down to a crust higher in the snowpack. In protected areas ski quality was variable but overall quite nice.

Below 3500'' a melt freeze layer was identified about 30-40cm below snow surface. With elevation gain this melt freeze layer quickly turned into a thinner 5cm crust that was easily identified with ski pole probes. Above 4000' ft the crust became even thinner 2-5mm in thickness.
Pit was dug with the intention of skiing April Bowl, but visibility quickly deteriorated. Layer of interest was thin crust was 40-50cm from surface. This crust seemed to be wide spread and could be found on the surface in wind scoured areas. In areas with fresh wind slabs the snow pack seems to have low strength and moderate propagation potential
4300' 36 degrees West facing, HS 130
CT14SC, ECTP21 40cm from surface

Layer that produced results in pit. 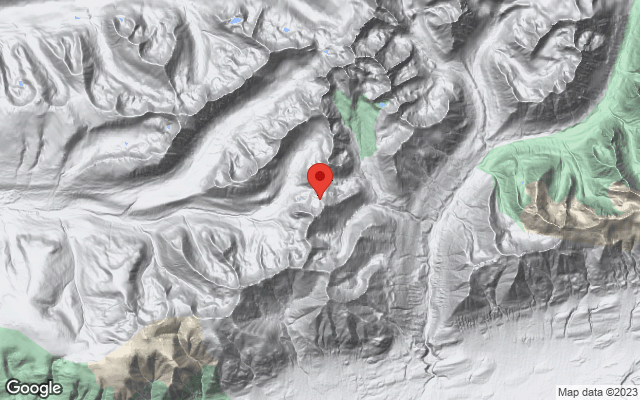