Toured up the west shoulder of Tenderfoot Ridge to 2800′. We were trying to look into a number of things: 1) Was the precip received in the recent storm cycle rain, or moist / wet snow? 2) Did the facets and surface hoar observed last Thursday before the storm remain preserved under the new snow? 3) How well is the new snow bonding to the old snow? 4) Is the new snow forming a slab, and what is the depth and distribution of that slab? 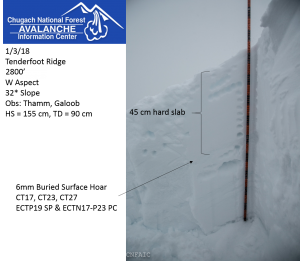 There was debris from a very shallow soft slab in the meadow at ~2300 ft before one climbs more steeply to gain the ridge at treeline. The debris had new snow on it, so it was likely from earlier in the storm cycle. It is unknown if the slide was natural or human triggered.

Cracking was only between or around skis, or when stepping above the skin track, otherwise no shooting cracks that radiated outward.

The new snow is not quite moist, but the moist snow underneath from the warm-up at the end of the recent storm cycle makes for difficult, heavy travel.

The new snow was not particularly cohesive or slabby below ~2000 ft, but between 1500 ft and 2000 ft a dramatic transition takes place where total new snow depth increases dramatically (~10", but likely slightly wind drifted), and the new snow is much more cohesive and slab-like.

In the alpine (>2500 ft) where the snow is subject to wind transport, the snow surface varied from cakey consolidated snow to breakable wind crust to dense supportable wind slabs >1 ft thick.

The Tenderfoot snowpack remains highly spatially variable and plagued with persistent weak layers. Below 1500 ft, the mid-pack crusts have almost completely faceted out during the cold and clear weather last week, so much so that one can now easily drive their ski pole all the way to ground, where previously is was difficult to even chop through the crusts with a shovel blade. The weak faceted snow and surface hoar observed last week is preserved quite well below the new snow, and hand pits were failing very easily or on isolation on this layer.

Between 1500 ft and 2000 ft, the new snow storm totals rapidly increase, with about 10" of total storm snow in places. The new snow becomes more settled and cohesive above 2000 ft, but never has a hand hardness of greater than 4F, except for in wind loaded areas, where a 1F to P hard slab can be found.

The first pit was at about ~2500 ft, NNW aspect, on a 29* slope. Height of snow was 115 cm, with 2-4" in the last 24 hours. This spot was selected due to interesting hand pit results - easy to moderate failure on 1mm facets 45 cm below the surface sitting under a thin melt-freeze crust. Stability tests showed persisting weakness in the 1.5 mm basal facets, with CT27 on the ground, but did not show propagation potential (ECTX).

The second pit was at 2800 ft, W aspect, 32* slope. The height of snow was 155 cm, but we only dug into the top meter due to extremely hard crusts in the lower snowpack. The December 29th buried surface hoar was found intact in this pit sitting below a 45 cm hard slab. The DEC29 BSH showed propagation potential in stability tests. 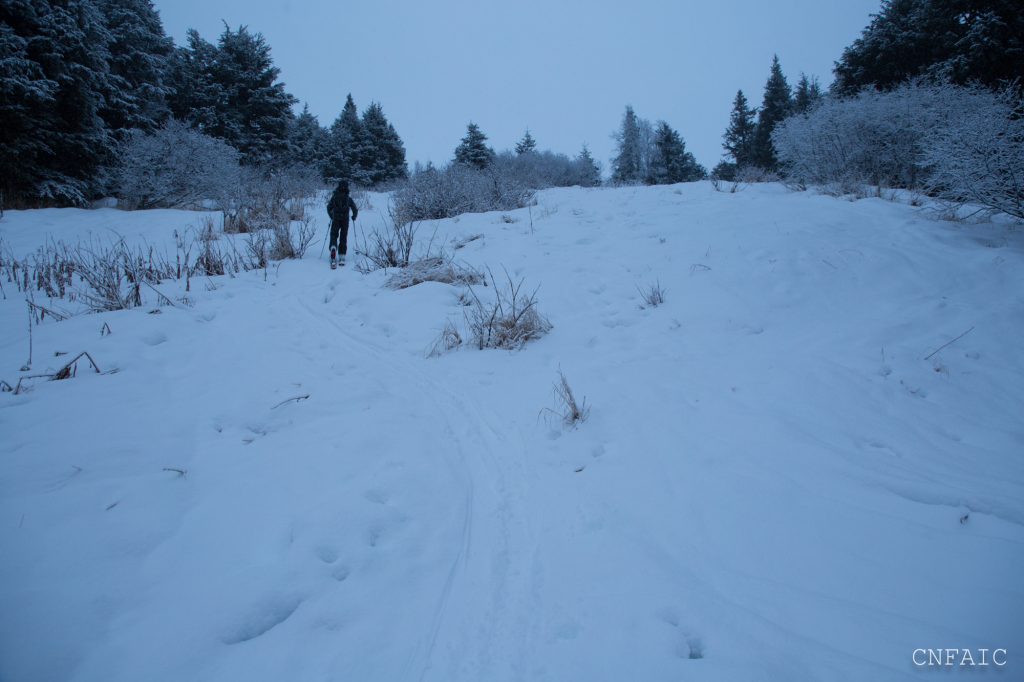 Thin snowpack with ~2" of fresh snow at 1400'. A layer of moist snow from earlier in the storm cycle made for difficult skiing at this elevation. 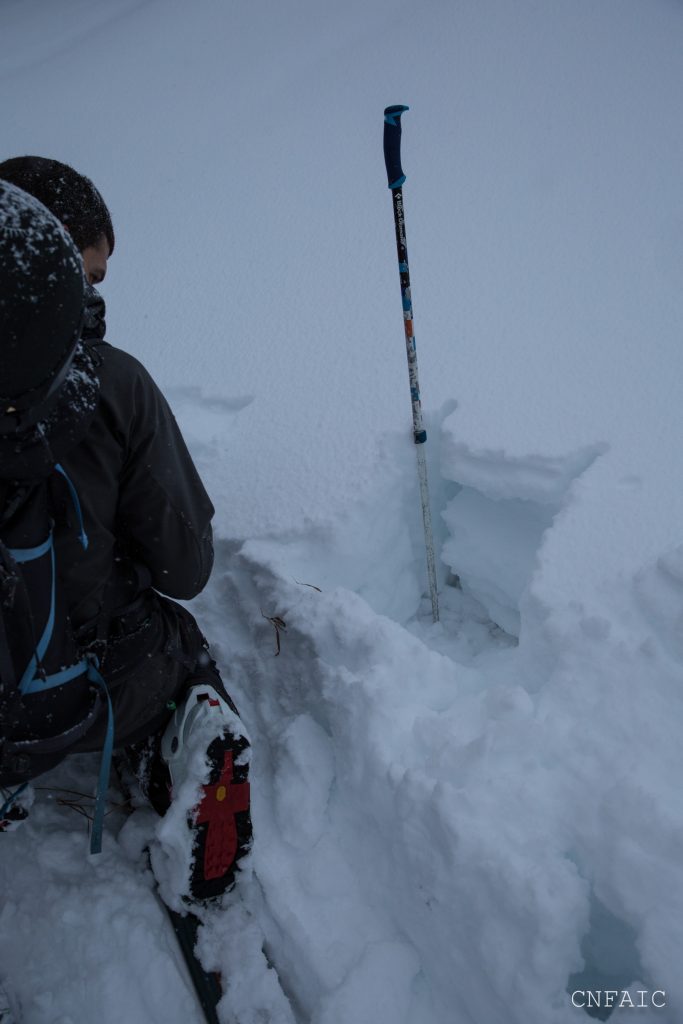 The general structure in the meadows below ~2000'. 2" of dry new snow on a 1-2" moist snow crust sitting on VERY weak facets. 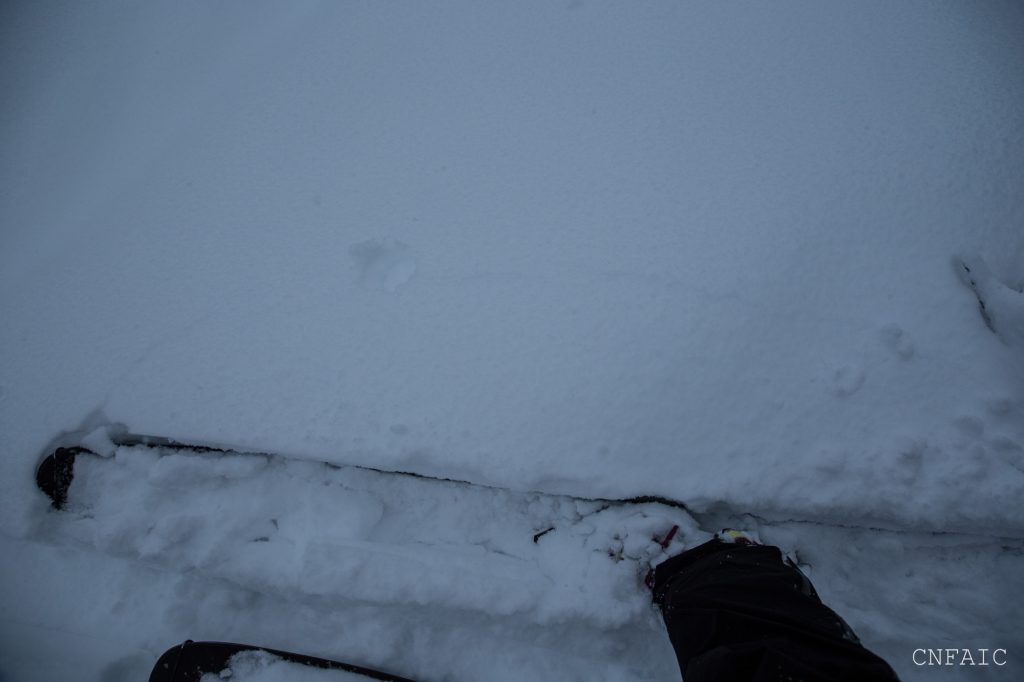 Cracking around skis in new snow. 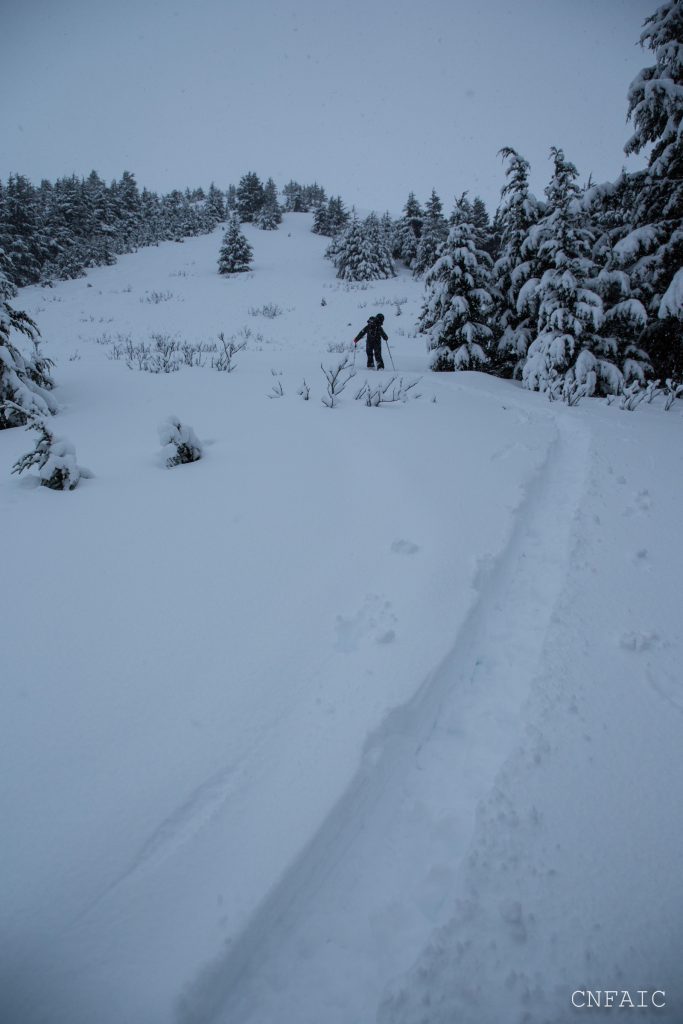 Deep skinning in the meadows. 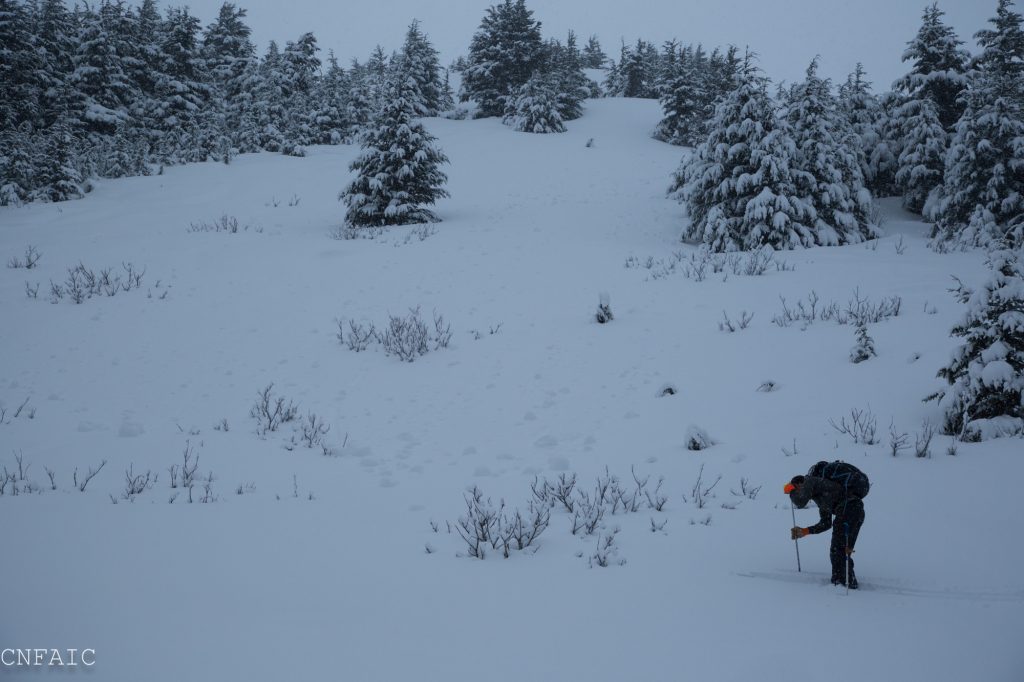 Debris from a mid-storm soft slab. 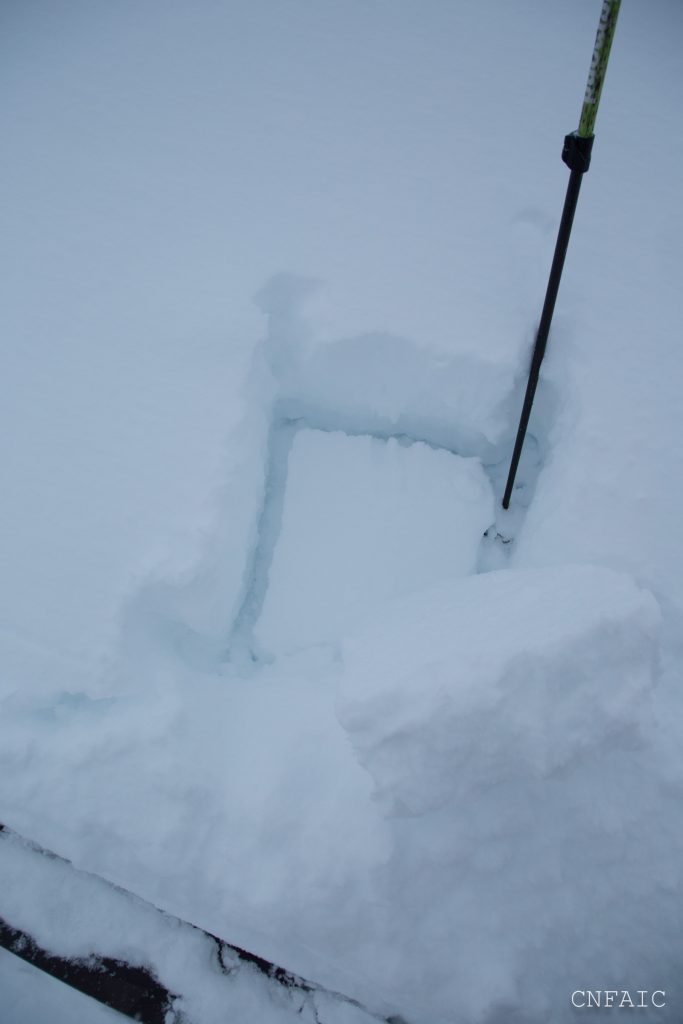 Hand pit at 2400' on a W aspect that failed on buried surface hoar. Most hand pits were failing on facets below this elevation. 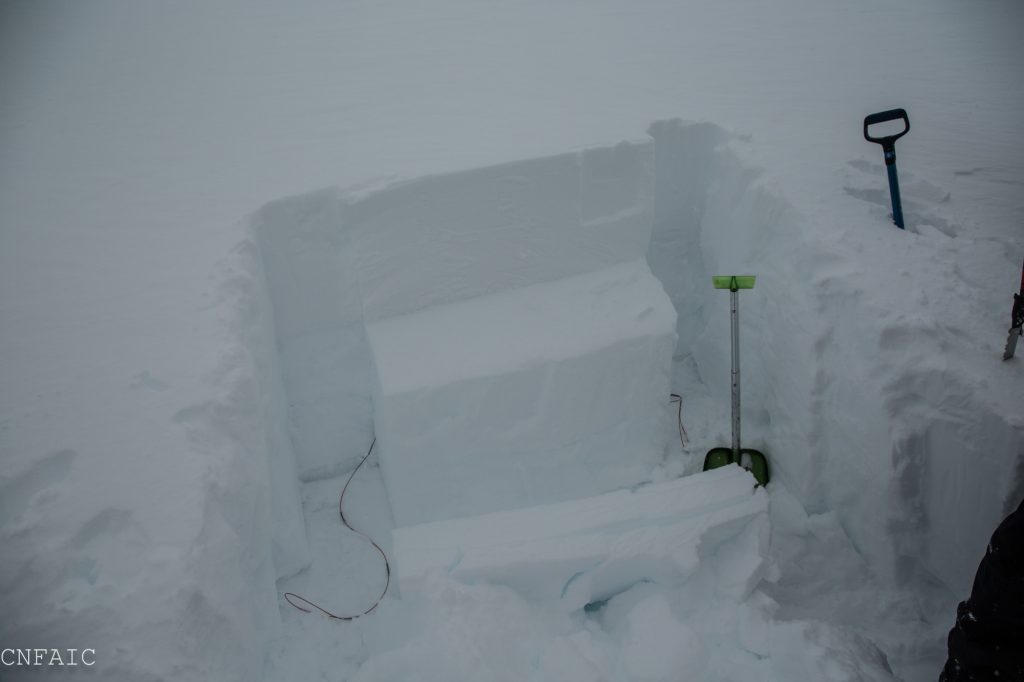 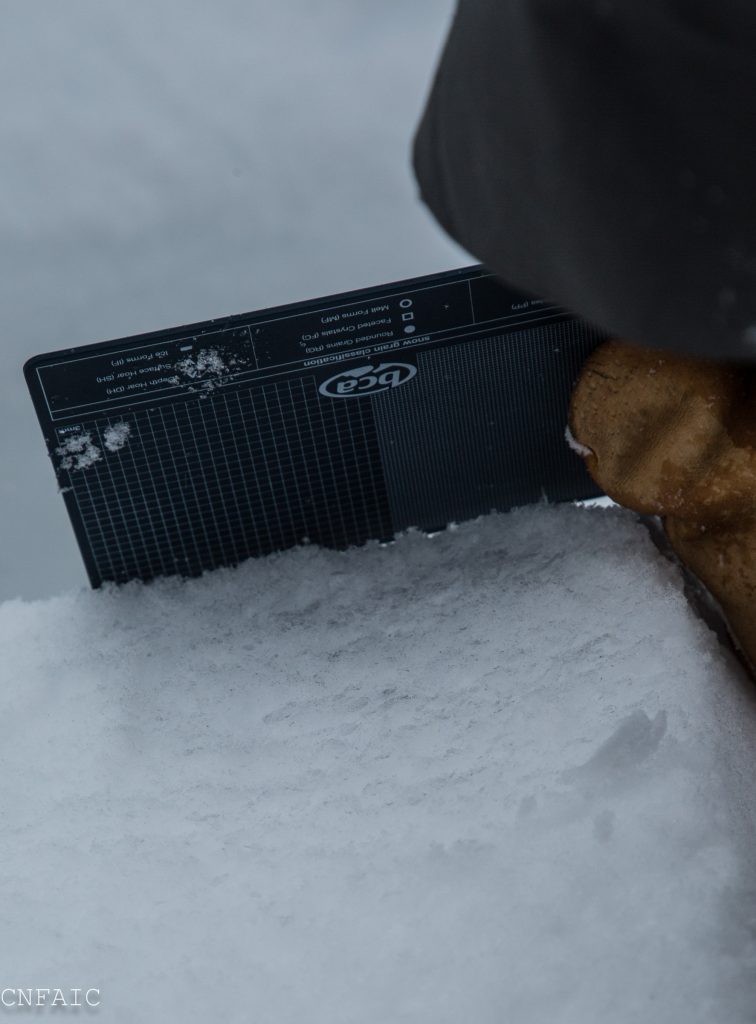 Buried surface hoar on the bottom of the slab after performing a compression test. 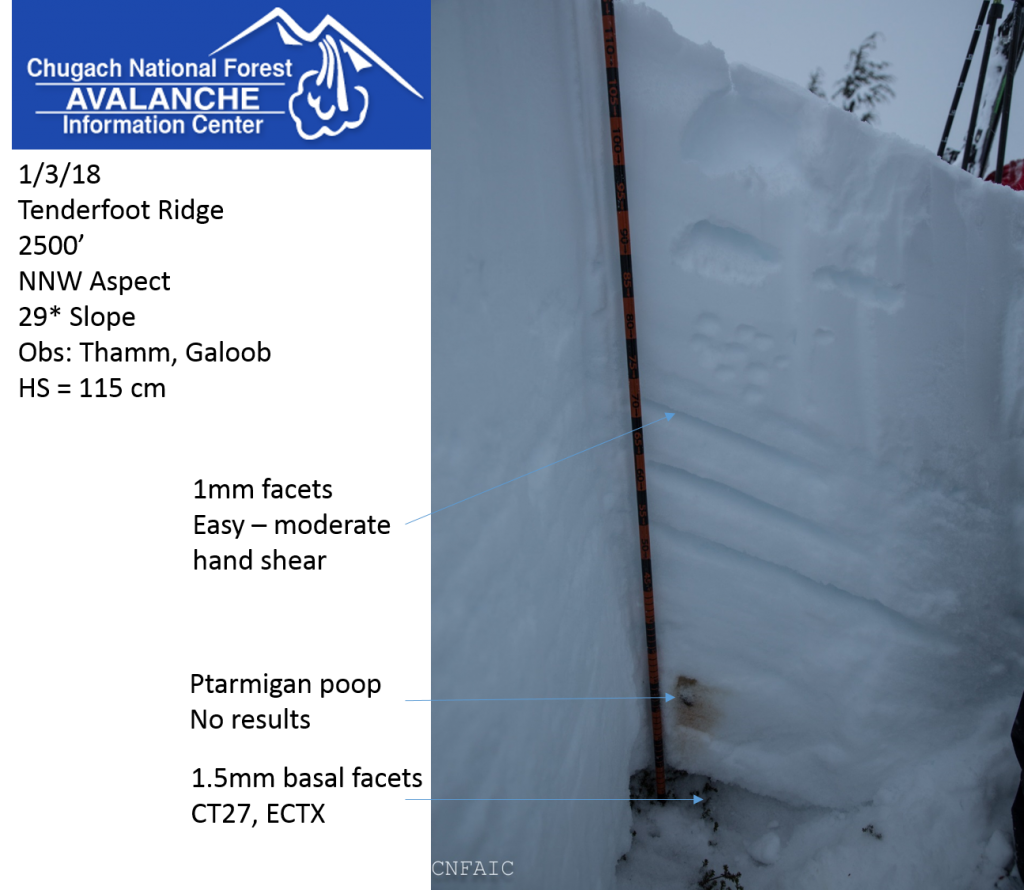 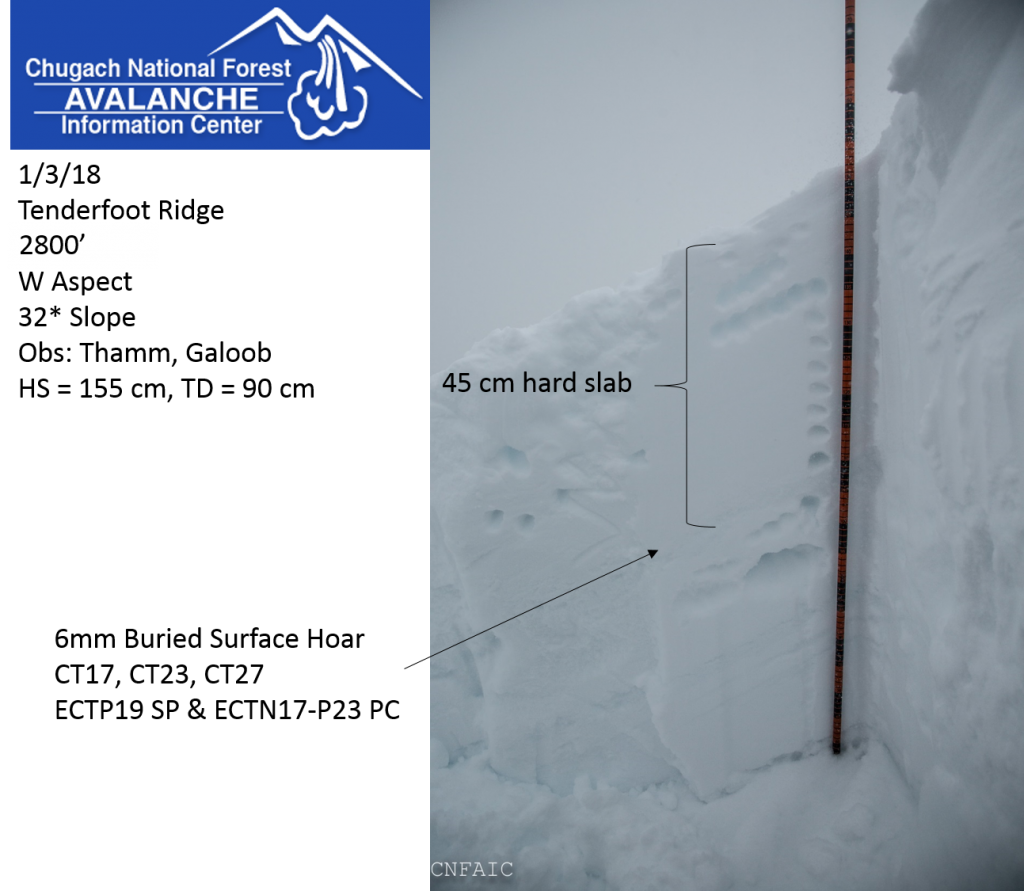 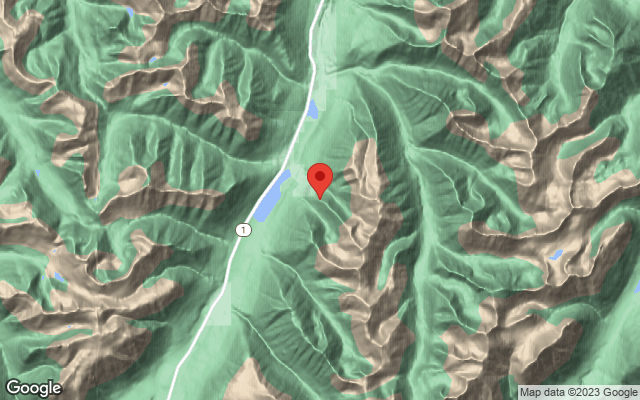