Ascended to 2750′ on Tenderfoot to dig near the 2/27 avalanche. Found hard wind slabs in many areas exposed to the wind above 1900′ sitting on a variety of persistent weak layers.

None. Old avalanche on North aspect of TriTip that occurred sometime since CNFAIC's last visit to Tenderfoot Feb. 28.

Handpits at 1900' were failing on isolation or easily 14" below the surface on facets over a melt freeze crust.

Pit 1 at 2500', NW aspect, 31 degree slope, HS=174 cm. CT23, CT24, ECTN27 failed ~45cm below surface on Jan. 25 BSH and 1mm facets. ECTX. There was a 2cm MFC only 5cm below this layer with facets just below the crust. No failure on this layer in stability tests. Found the New Year's BSH 100cm below the surface. Did not perform tests on this layer due to hemlock branches in lower portion of pit.

Pit 1 at 2750', W aspect, 20 degree slope, HS=135 cm. CT25, CT23, ECTN12 failed 20-25cm below the surface on Jan. 25 BSH and 1mm facets. There was also a 1 cm MFC with facets below the crust 25-35cm below the surface. No failure on this layer in stability tests. Both of these layers were not planer, likely formed on variable surfaces (sastrugi), but were continuous through pit wall. 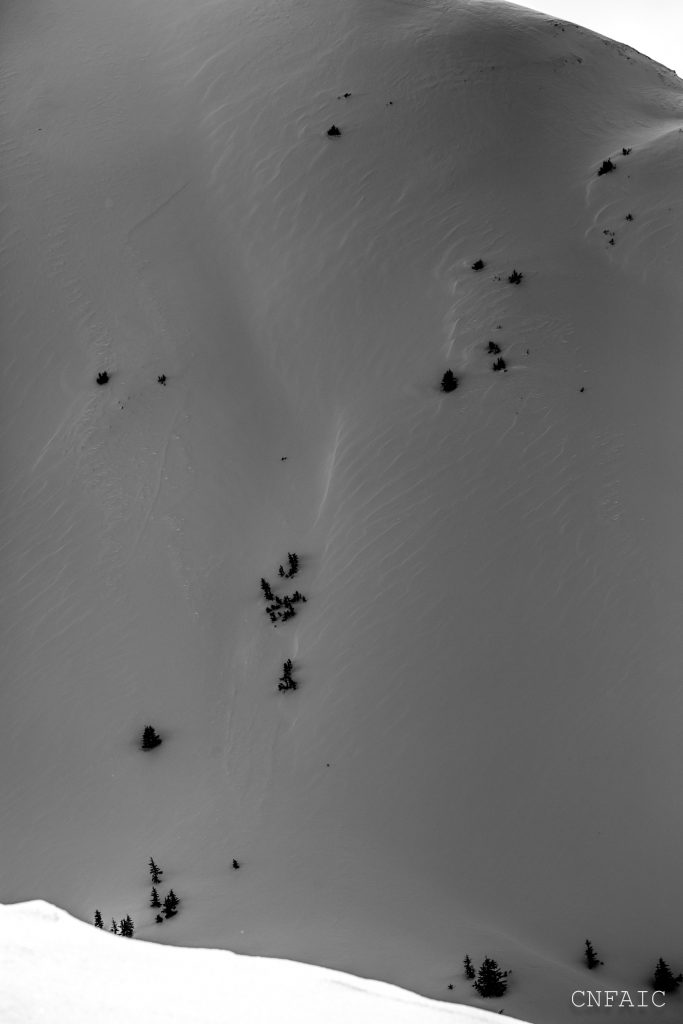 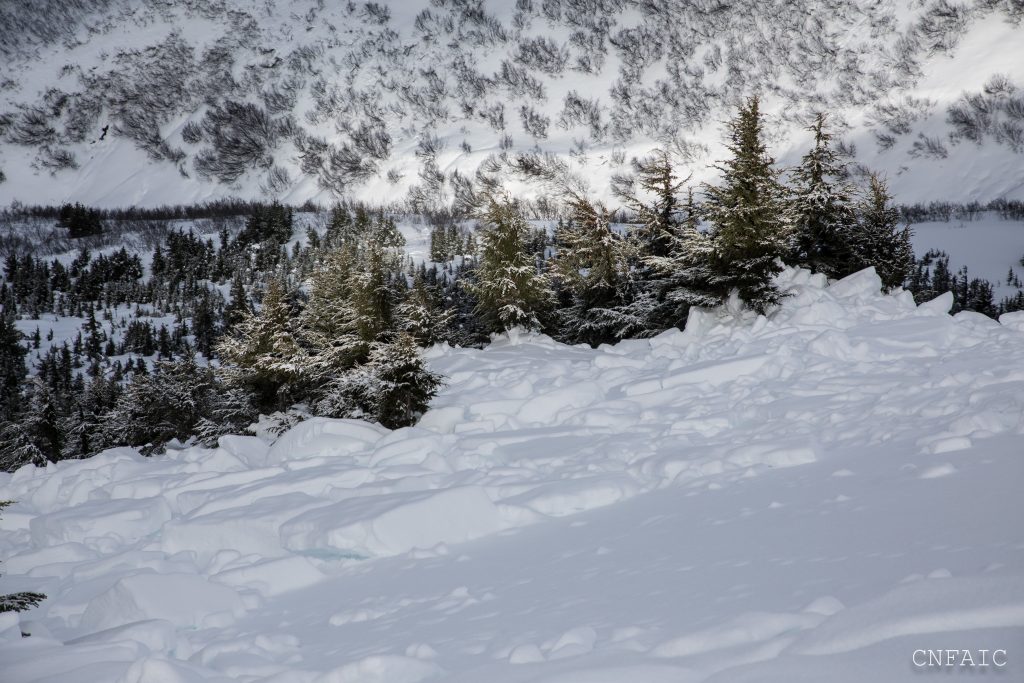 Avalanche debris from the Feb. 27 human triggered avalanche that ran into the trees on a Northerly aspect of Tenderfoot 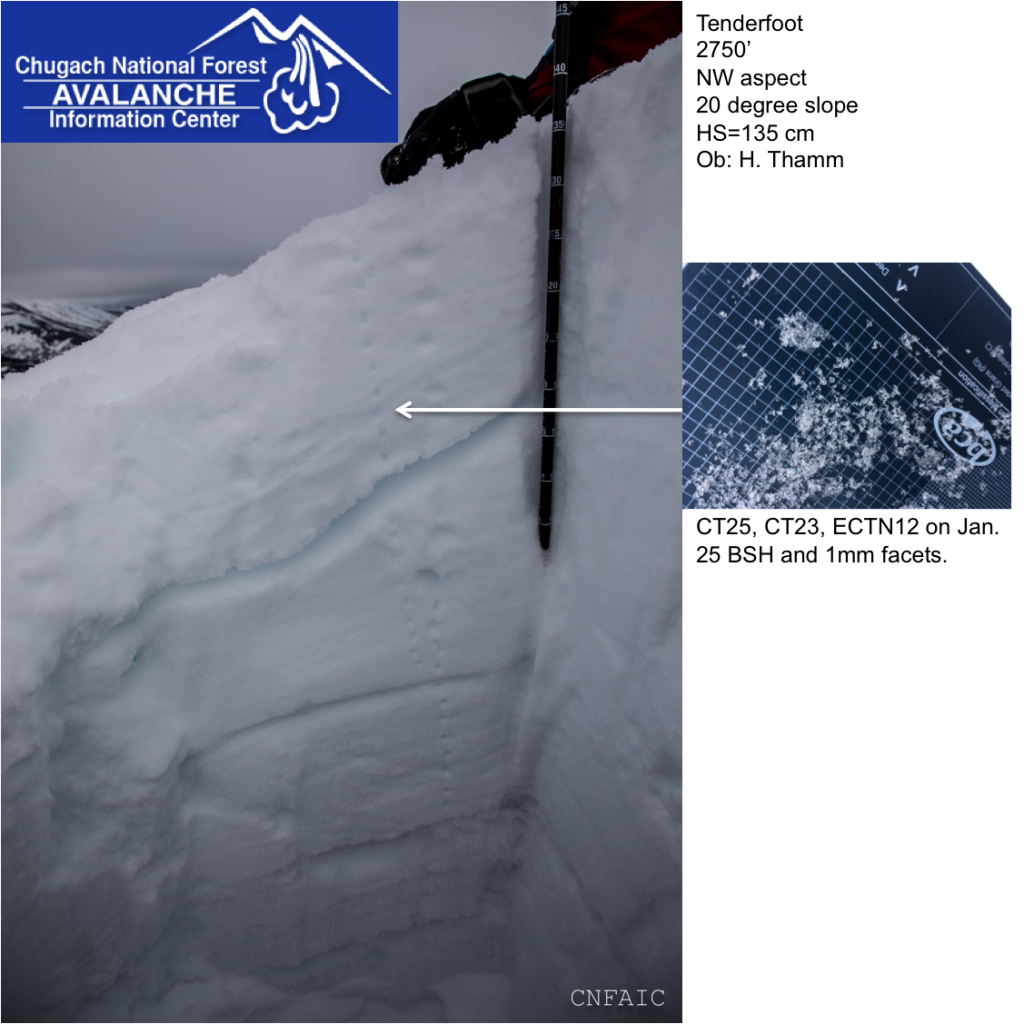 Found the Jan. 25 BSH intact mixed with facets in a wind affected area near the uptrack at 2750'. This weak layer lies below a hard slab. 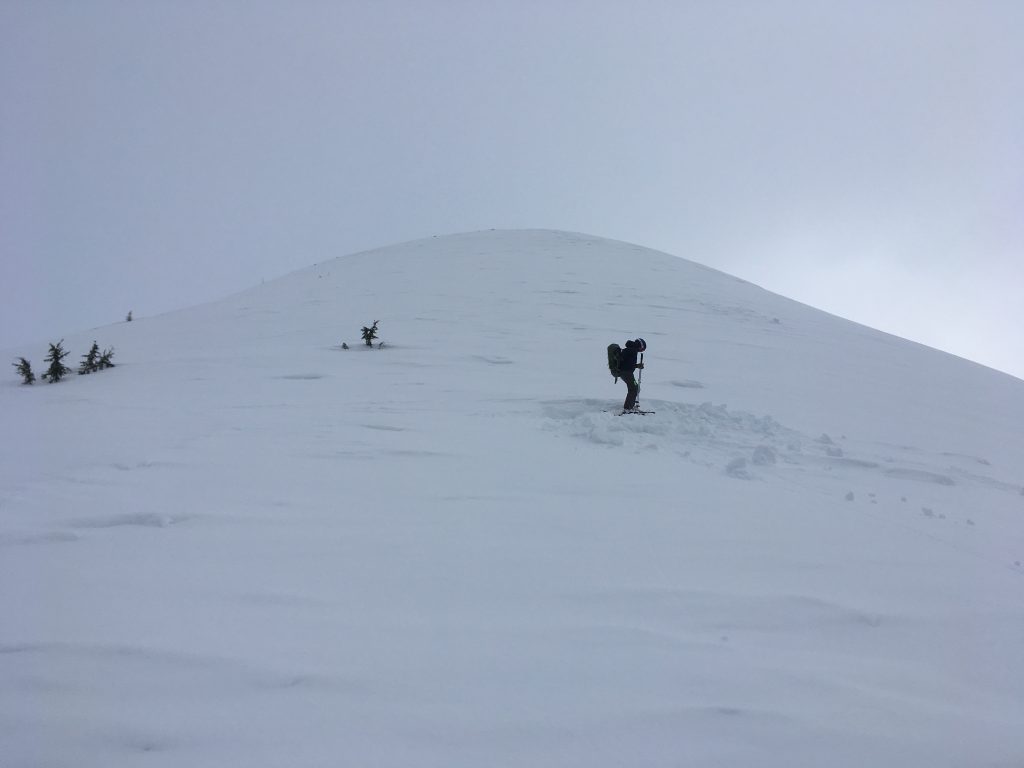 Pit location at 2750'. In snow pits along the uptrack digging into the crown of the 2/27 avalanche on a NW aspect and on a W aspect, we have found the Jan 25 BSH and a MFC/facet layer underneath a pencil to knife hard slab. 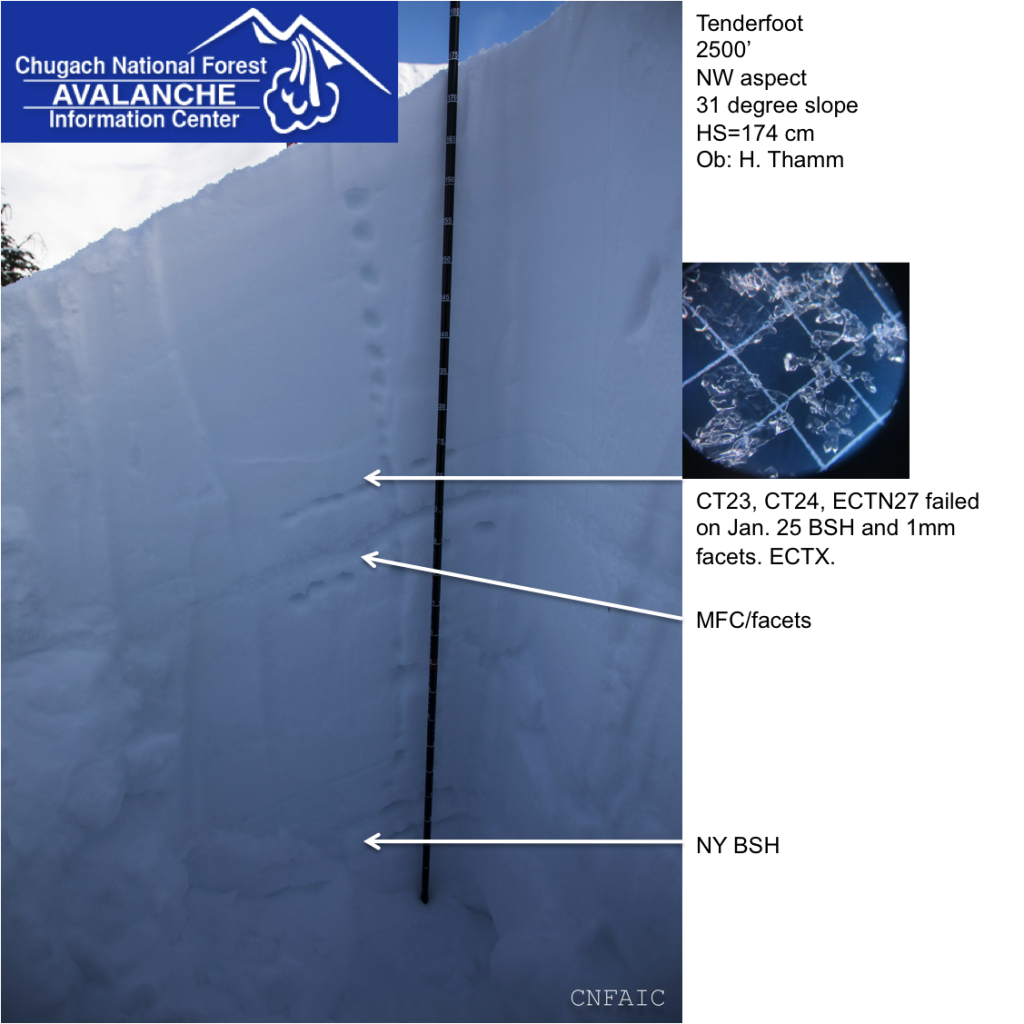 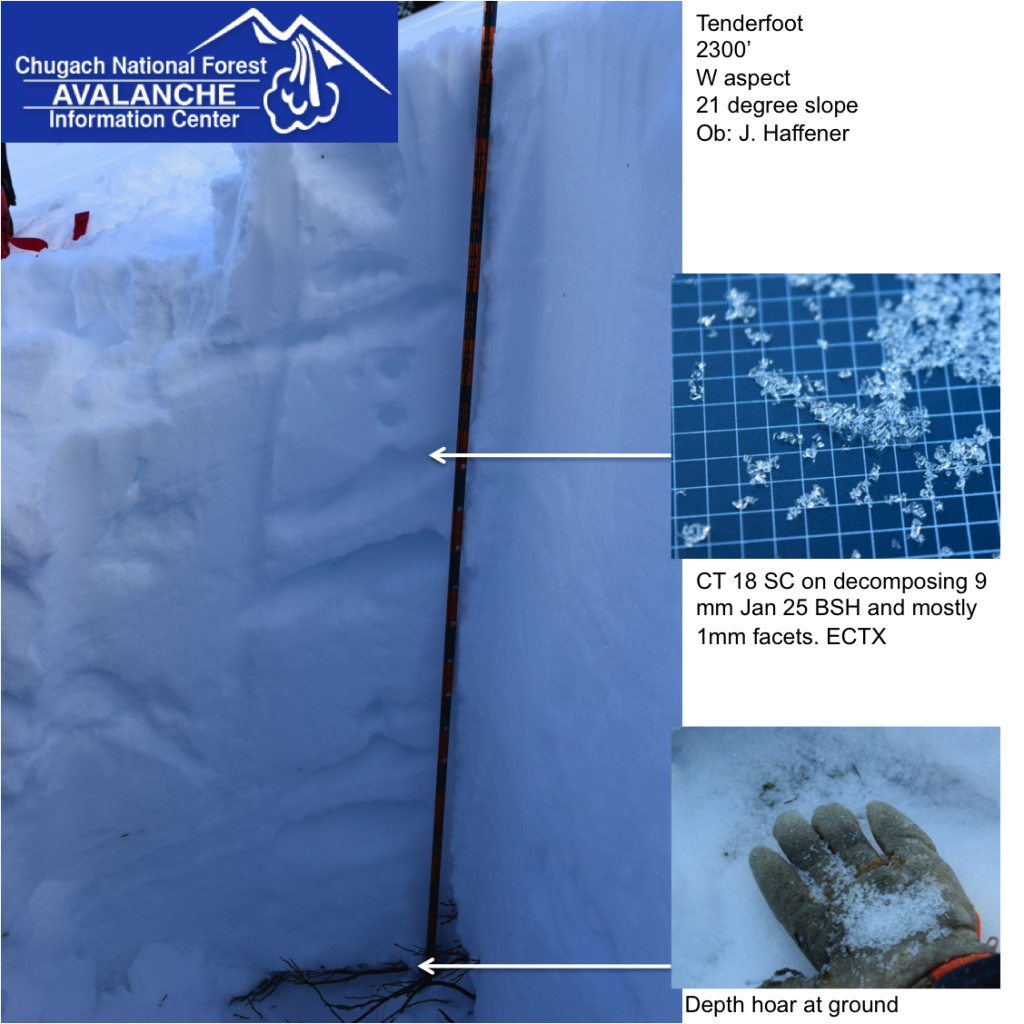 Poor structure with many weak layers at 2300' in the trees. 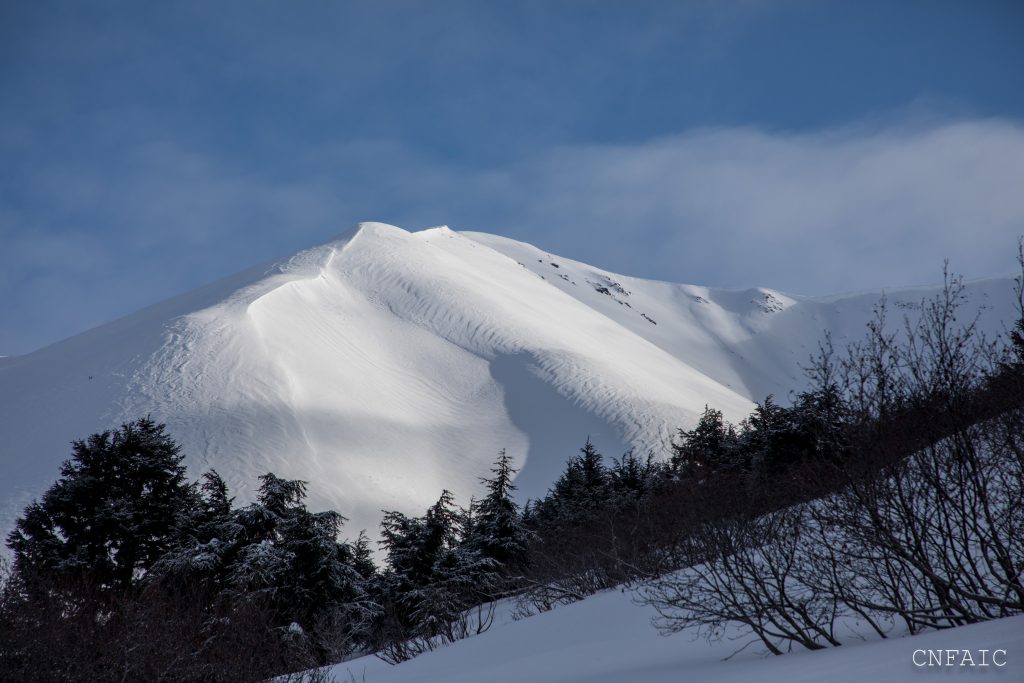 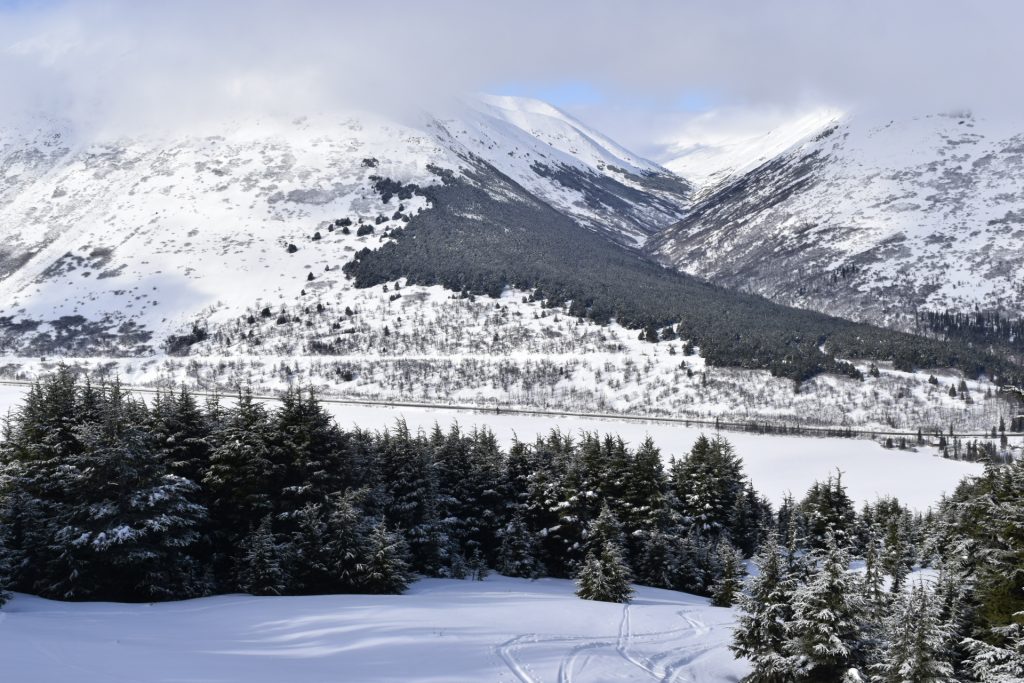 The trees give evidence of the winds after the last storm. Most of the snow has been stripped from the trees and alders at all elevations. 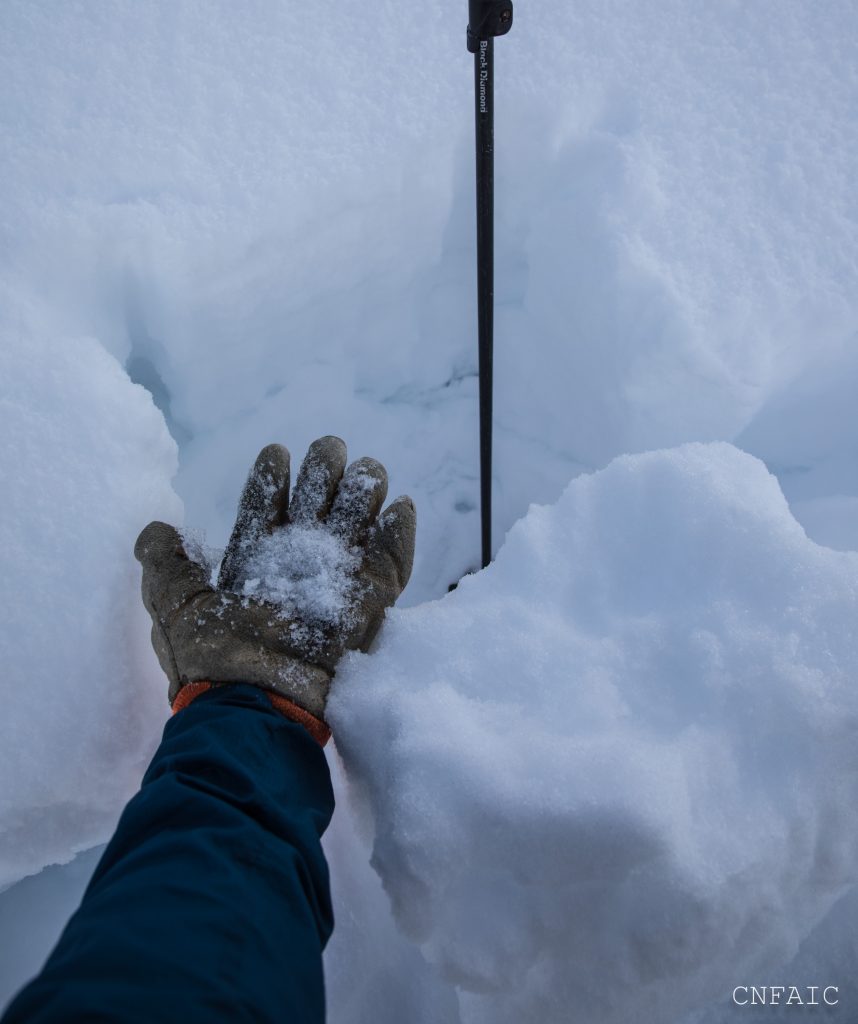