Taylor Pass via the standard uptrack from the sunburst lot

Small windslab - as pictured below - that we assume was triggered by skiers descending from the sunburst ridgeline.

Temps near freezing down low, and the high 20s at the pass.

Broken skies with low clouds/valley fog that occasionally obscured the view at mid-elevations in the AM... Overcast skies by late afternoon.
Winds above 2000' were light and highly variable in direction, with moderate gusts from the SW and E above 3000'. Strong gusts at Taylor Pass.

Judging from snow transport, winds appeared to be moderate gusting strong throughout the day on nearby ridges/peaks.

2" of new snow covered the route, with wind transport reducing this to a trace at some locations above 2000'.

Prior winds have made a 'pillowed' texture even at the valley bottom between Sunburst and Magnum - see photo below - and last night's snow was soft over these rolling features... while winds have transported snow in the past 24 hours, clearly stronger winds have blown during the days before that.

A few spots along the route above 2000' had the New Years Crust near the surface of the snow, with just a light dusting of snow on top, also indicating the influence of winds since 12/28...

We dug two pits back by Taylor Pass, seeking out a thin spot where persistent grains below the New Years Crust would be present, and also checking on how recent wind slabs were bonding to older snow. See below for pit results and more details!

On a steep south facing slope around 1700', the 2" of new snow covered up a very thin and fragile sun crust that formed Sunday and/or Monday. Today, the snowpack was dry even to road level, and the sun was generally obscured. 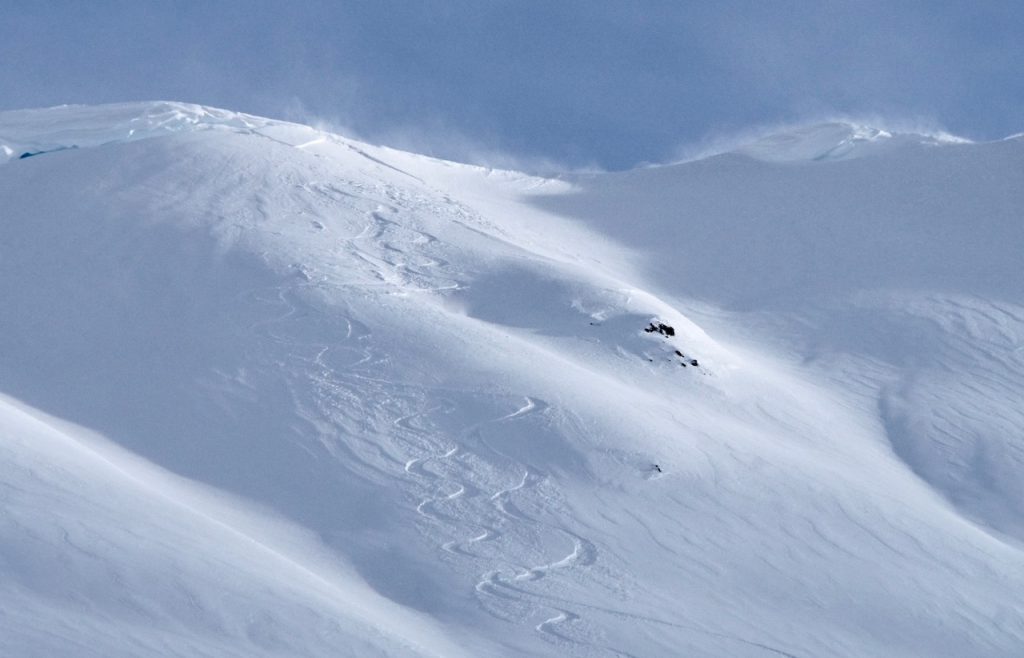 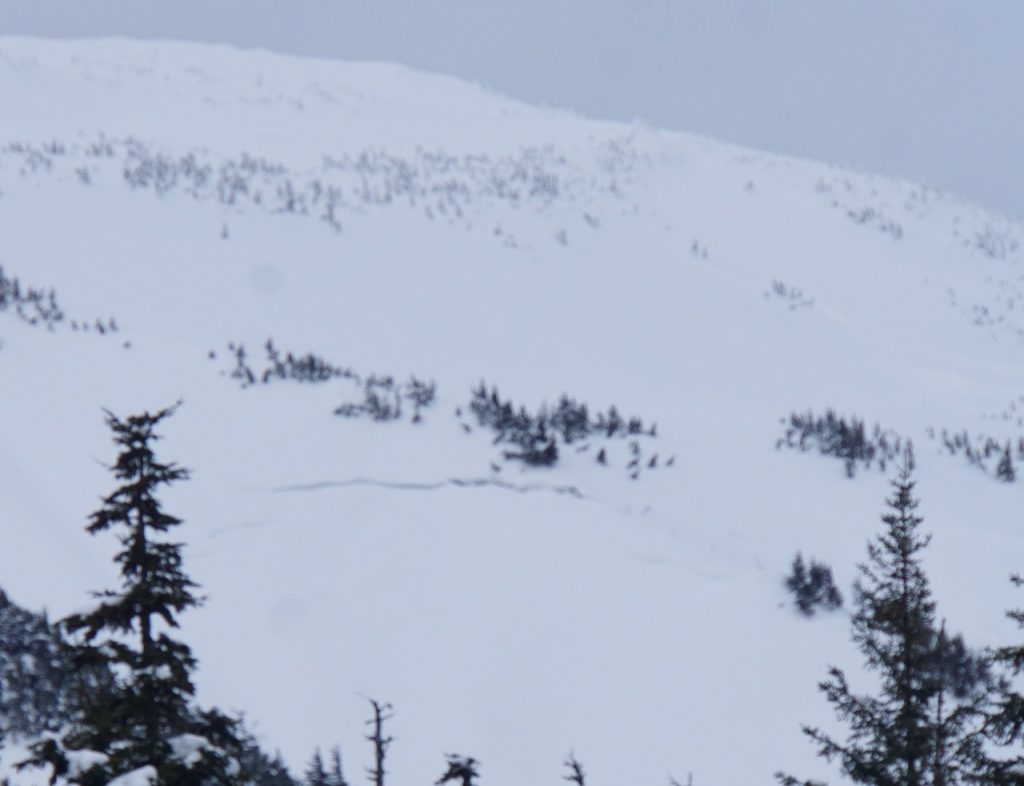 New glide crack opening up on Seattle Ridge, roughly across from Eddies. 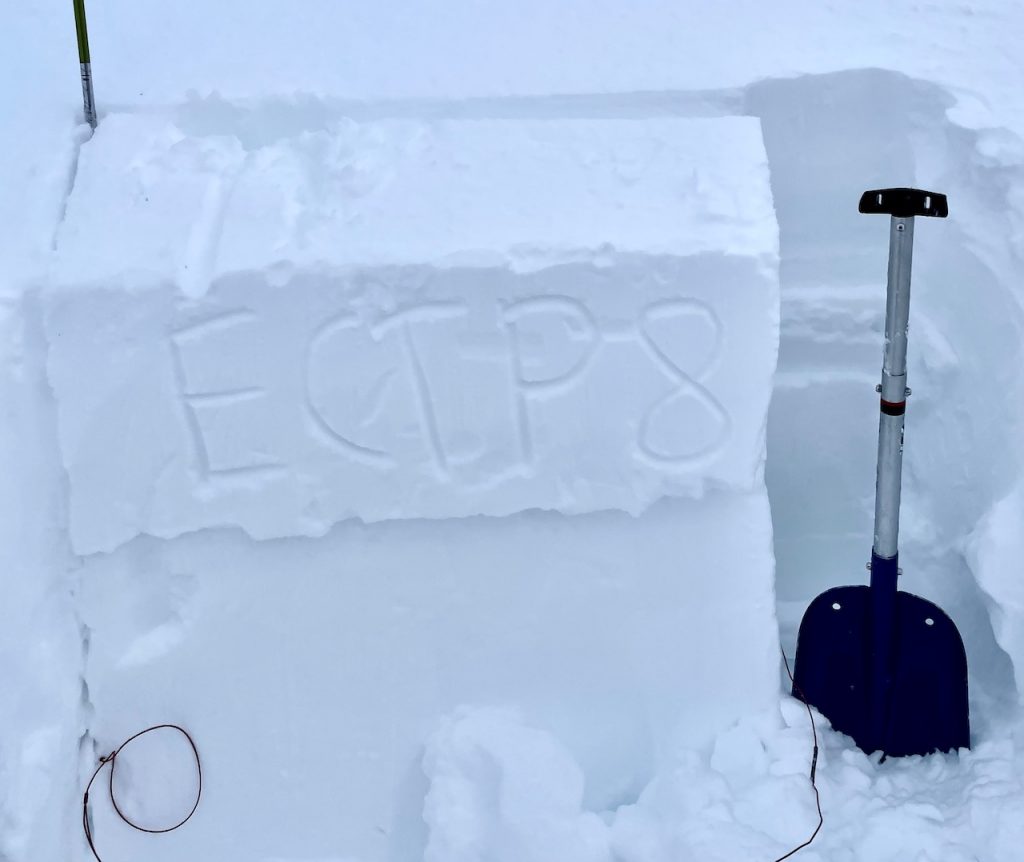 After a hand shear failed with easy force at this location, we decided to dig a shallow pit to investigate this 14" wind slab, about 100 yards below Taylor Pass. In a compression test, this block failed on the 8th tap, with the weak layer 1mm fist+ hard decomposing recent snow. Hand shear tests elsewhere on the route failed with easy to medium force. 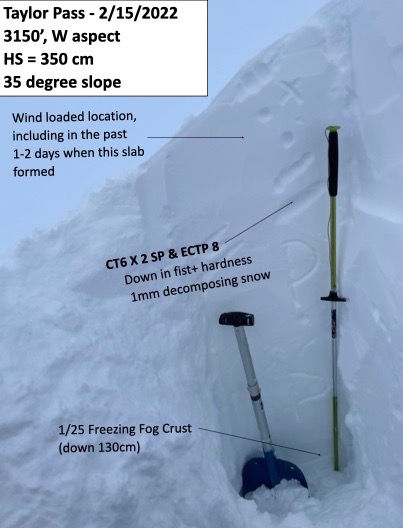 This is the snow structure at the location of the ECT pictured above. With 350cm of total snow and the 1/25 freezing fog crust down 130cm, this location has seen a lot of wind loading in the past three weeks! 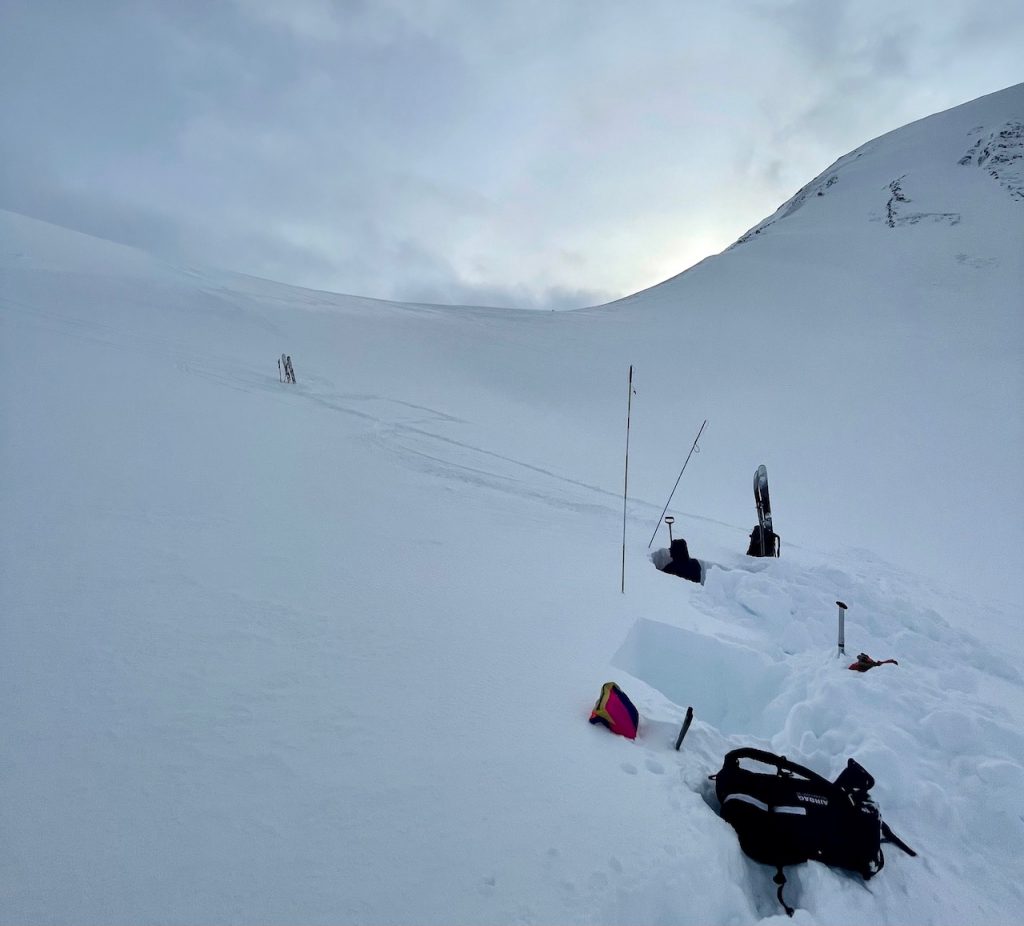 This photo shows our shallow pit location, at a thin spot well below Taylor Pass where only 130cm of snow covers the ground. The windslab pit above was dug 50 yards uphill from the skis in this photo. 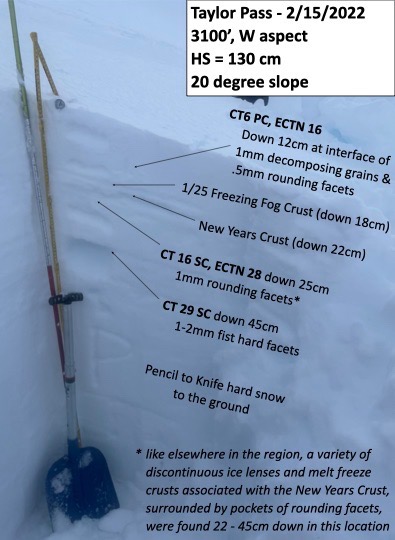 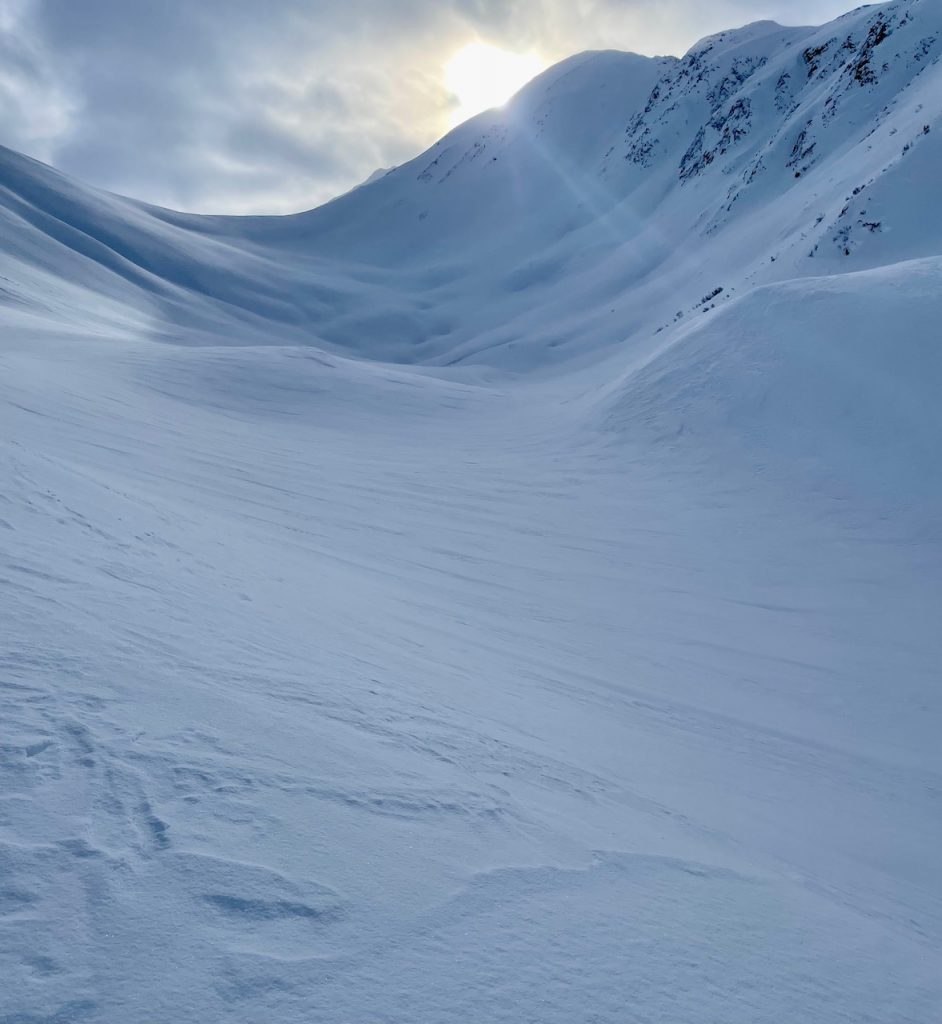 The New Years Crust is at the surface at a few places along the usual route to Taylor Pass, including here where the new snow just barely covered it. 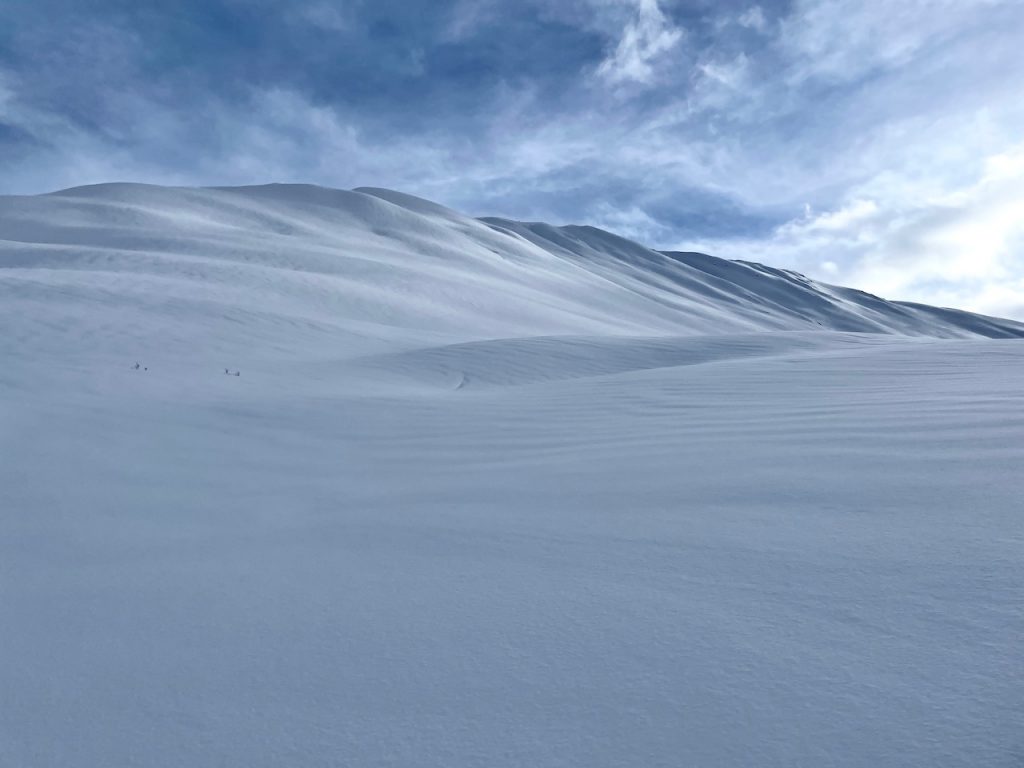 Prior wind affect on Sunburst. Just above treeline, where this photo was taken, these wind pillows were covered by 2" of soft new snow. 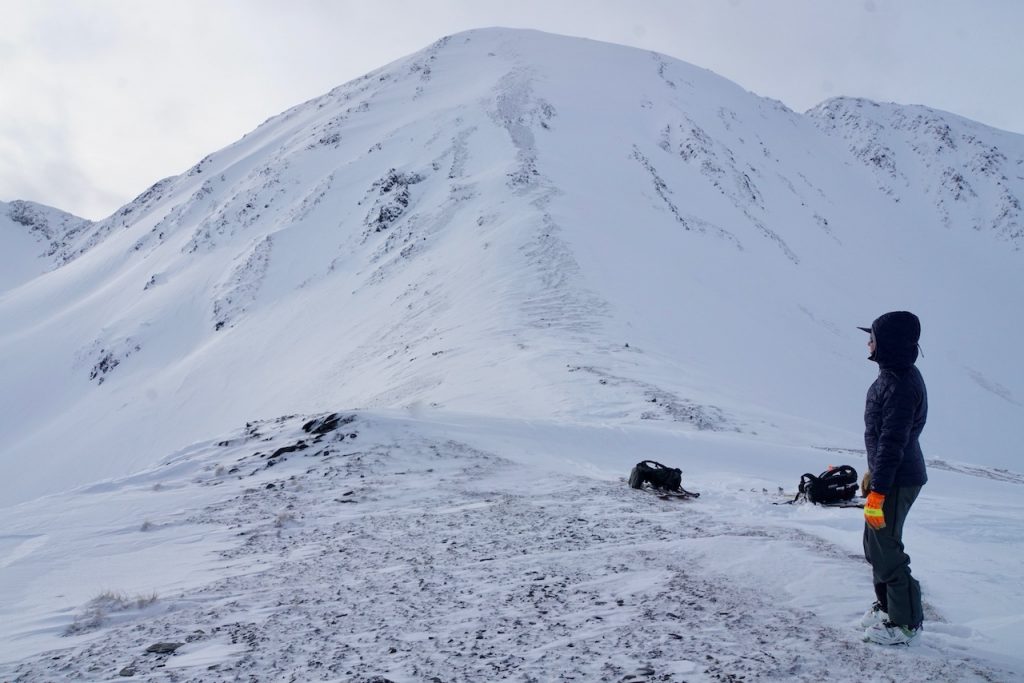 Taylor on Taylor Pass! Winds have cleared snow from the pass like usual. 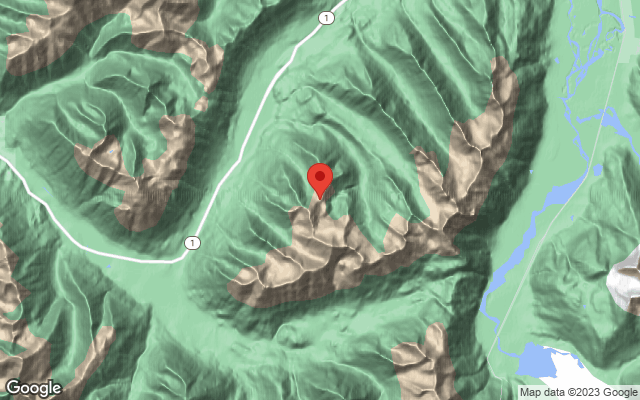