Location: Sunny Side of Seattle

We skied the alder zone above Bertha Creek Campground. Snow was very unconsolidated. When not following a skin track from before the Jan 19/20 snow fall, we had to use ski crampons because we had ski penetration completely through the 15″+ of fluff on top of the crust and side-hilling was very slippery.

We saw evidence of at least 3 old avalanches than ran about 1000 vertical feet. I think they were natural releases. I think they were dry-loose or soft slab. I think they happened during the Jan 19/20 snow event, because there was 1-2" of new snow over the bed surface, but 8-10" over all the old tracks in the area. We did not get all the way up to the start zones, which were several hundred vertical feet above the alder line, in micro- terrain features on the "faces" between the large gullies on Seattle Ridge's east face. I am estimating the slope angle of the start zones based on Google Earth. The slopes we were skiing on were measured at 28-35deg. The debris piles were small (15-50' wide, 20-50' long, 0.5-2' deep), but were also several hundred vertical feet into the alder zone. The paths crossed through several thick sections of brush, and in a few cases wiped out old skier tracks. The alder in these areas had all "popped up" from being bent over in the snow pack, and had released all the snow on branches.
I was mostly impressed by how far into the alder and onto slopes of only about 30deg these avalanches ran. I also thought it was worth noting that these paths are now mostly bare bed surface, but it's hard to tell from afar. The stack of facets and fresh snow is not in these areas.

very dry loose uncosolidated snow over facets, over a crust. 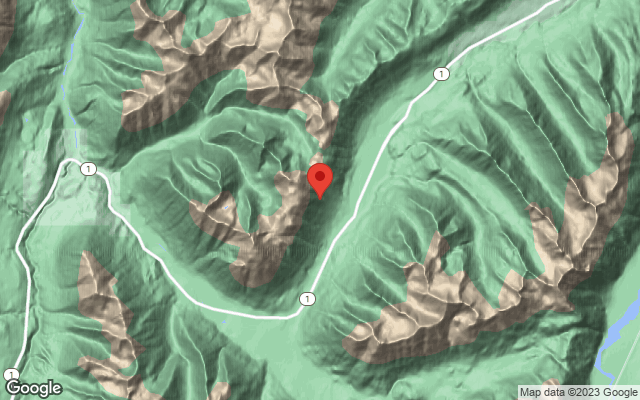