Skied the southern end of Seattle Ridge. The snow was inconsistent, but generally fun turns.
We had a large (20-30yd diameter?) whump at 1,200ft. We had another bigger whump (60yd diameter?) that was strong enough to knock berries off of bushes 20yds away. We stopped to dig near that the second whumph. Our pit results confirmed what the forecast has been saying for several days. There are slabs in the snowpack with 2 significant weak layers that can propagate. We already had planned a mellow tour, we stepped it back a few notches more after the whumphs by ripping skins earlier in our laps to reduce exposure to steeper slopes above.

We skied a few laps in calm winds, but at about 2pm downslope winds picked up to 10mph+. Snow transport was incredible. Our skin track filled in in less than 30 minutes. In 1 hour our ski tracks were nearly erased (shin deep). We left.

Two small (D1 R1) slab avalanches observed on the ESE face of Seattle Ridge. Photographs taken from the Sunburst parking lot.
These were of particular interest to us because we were planning to skin through similar terrain further south in the pass. Neither of the avalanches occurred in obvious (to me) spots for a natural trigger. Also, both are in terrain that is below 35deg slope according to my topo map.

Also, there is a large crown at the top of Cornbiscuit. It might be an old glide crack, but I think it is a more recent slab release. The edges aren't sharp anymore, but it is not as filled in as the other glide cracks near it.

Cold and Clear. Similar to last few weeks, the temperature drops quickly when descending south on the pass. 12F deg drop from Center Ridge lot to Bertha Creek.
Calm on the slopes we were skiing from 10am until 2pm, then 10mph downslope winds came on quickly.
Ridge top snow plumes seen most of the day on Pete's North and South, and on Fiddlehead (aka 4940).
No ridge top winds noticed at the northern end of Turnagain (Magnum through Eddy's)
Lot's of ridge top snow plumes seen on the morning and evening drives along Turnagain Arm -> Hope Point, Sunrise Peak, Alpenglow, Pyramid, etc

highly variable. Enough good skiing powder to be found in lanes, but also breakable wind board, hard wind slab, and zones with less than 10cm of snow over grass - all depending on topography exposed to previous days' cross slope winds from the North~ish.
Ski penetration while skinning was usually ~10cm. 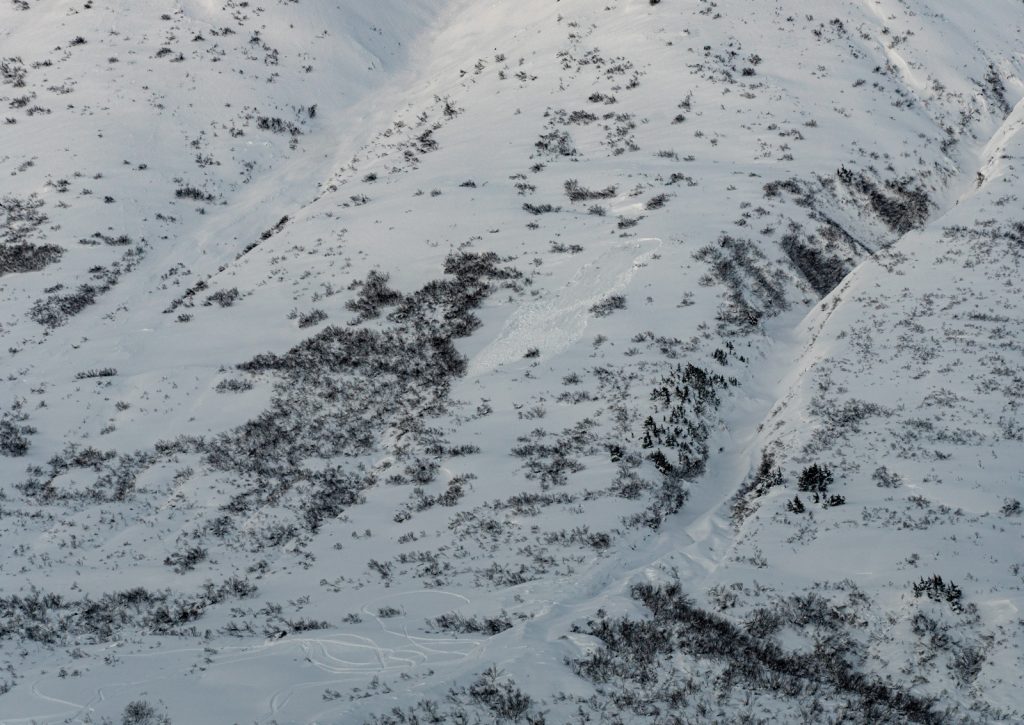 Avy 1 on ESE face of Seattle Ridge, across from Sunburst 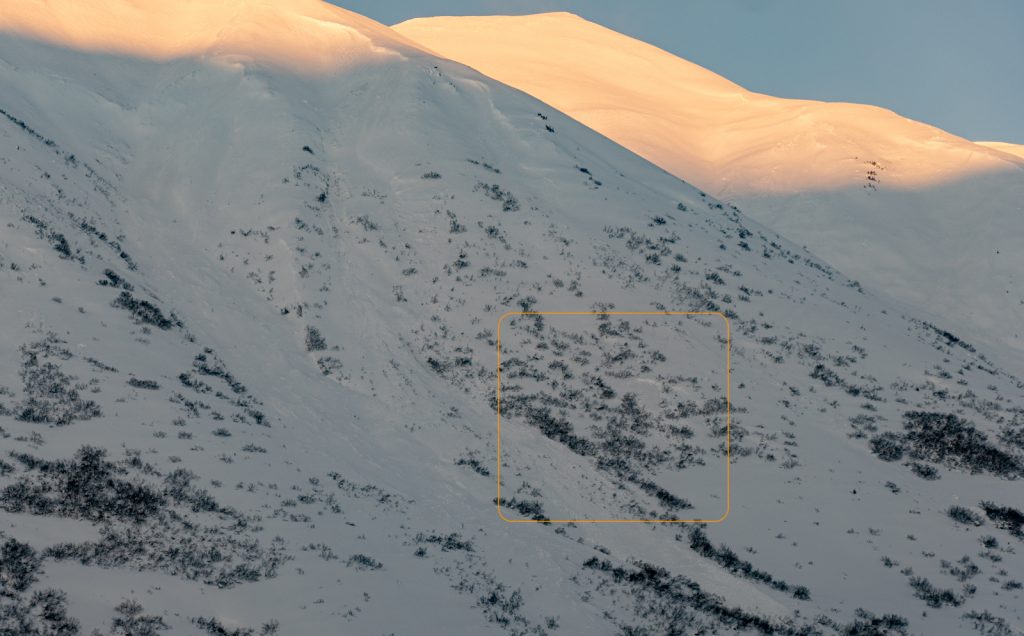 Avy 2 on ESE face of Seattle Ridge, across from Sunburst 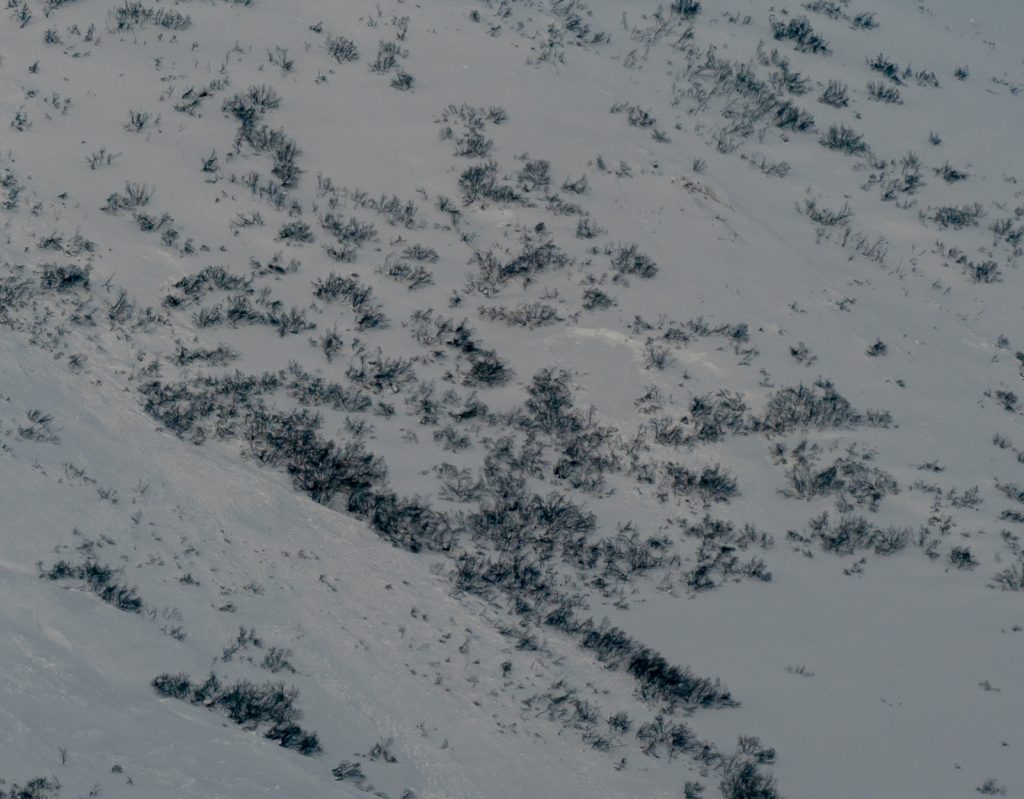 Close up of Avy 2 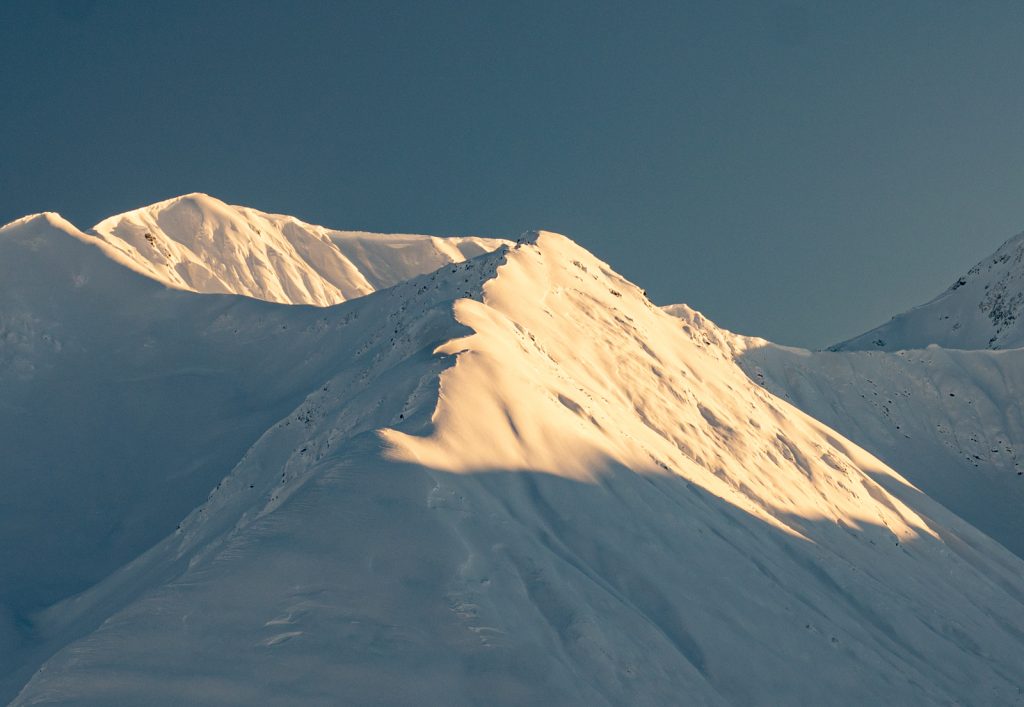 The crown near the summit of Cornbiscuit. 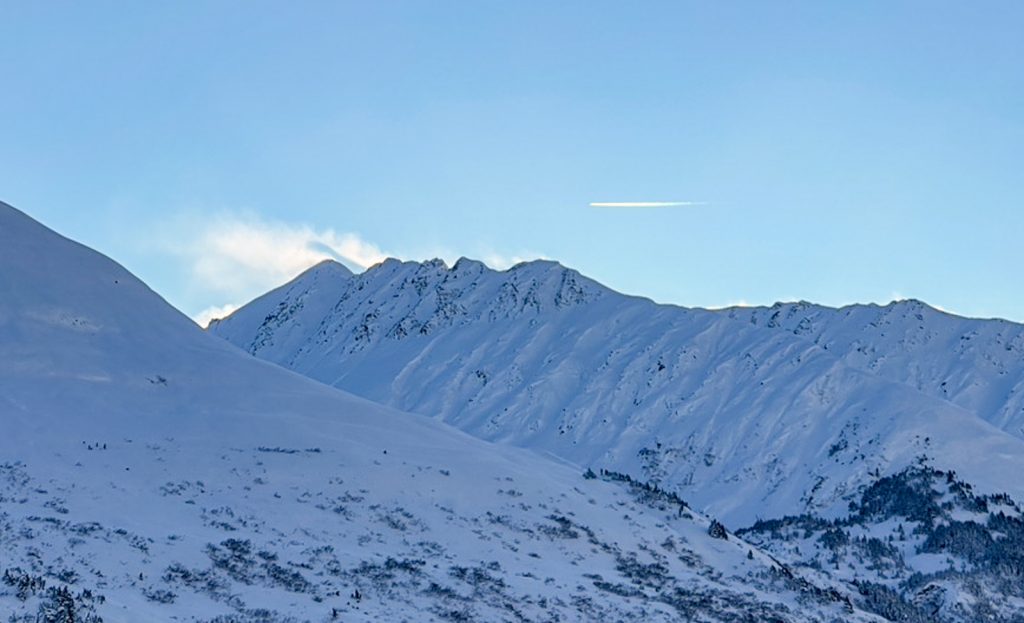 Ridge top winds moving snow on Pete's North and South all day long. Similar winds seen on Fiddlehead (4940), but not on other peaks along the Pass 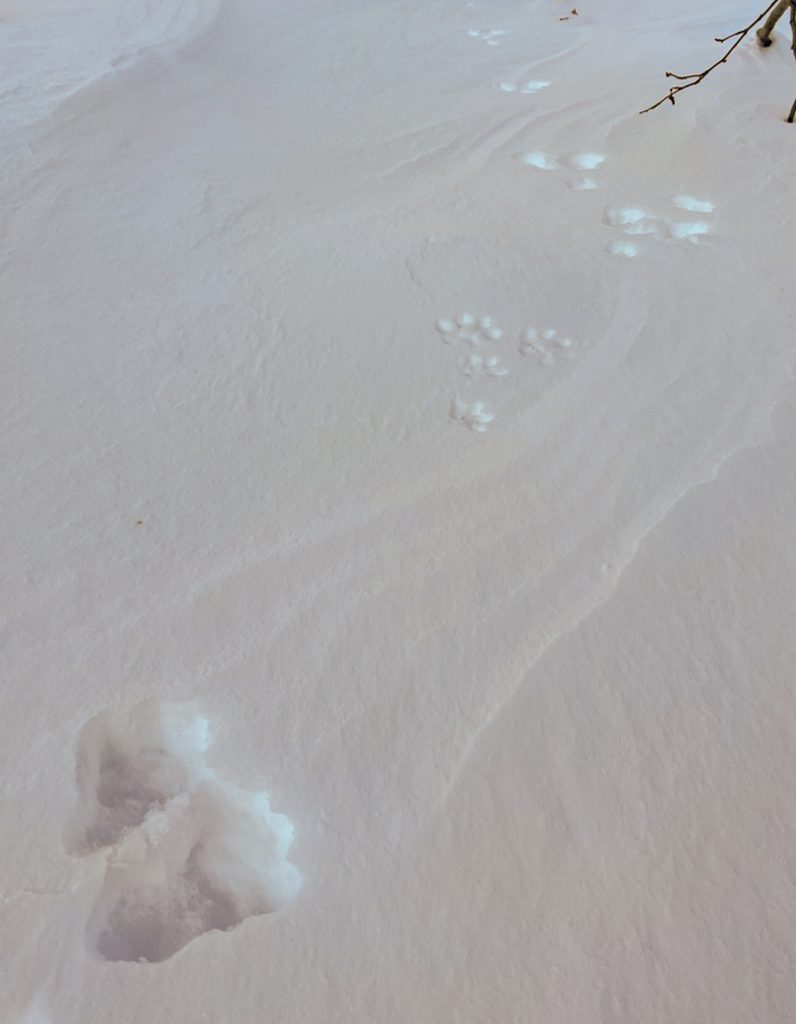 Variability in surface snow density as demonstrated by a snowshoe hare. 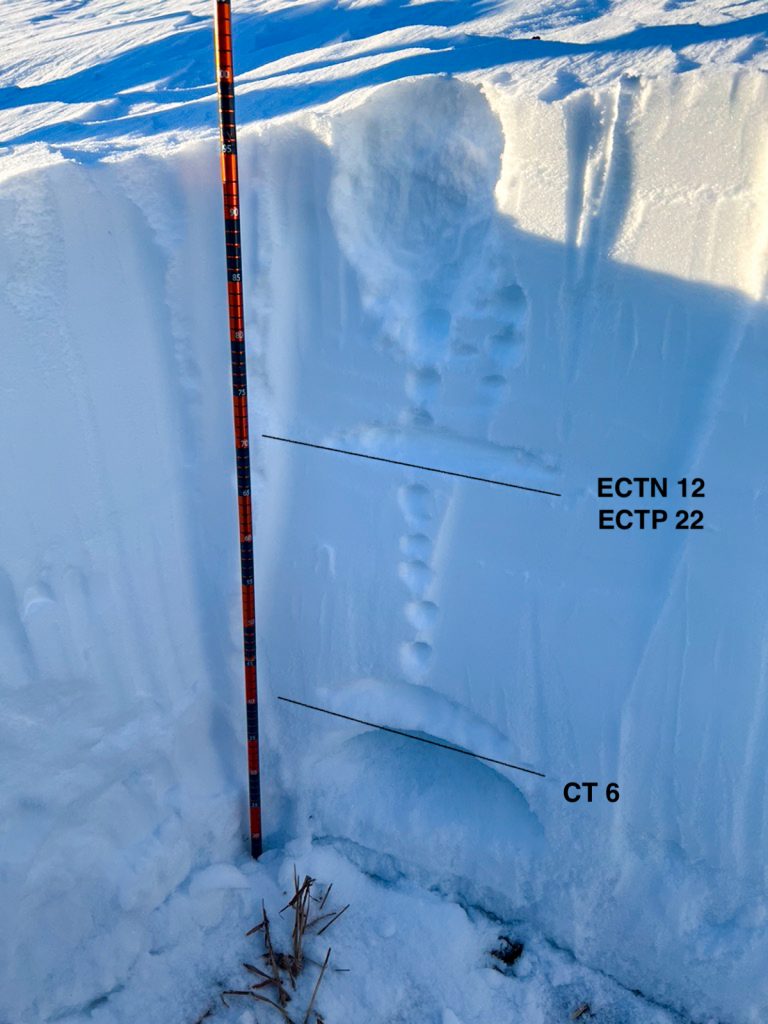 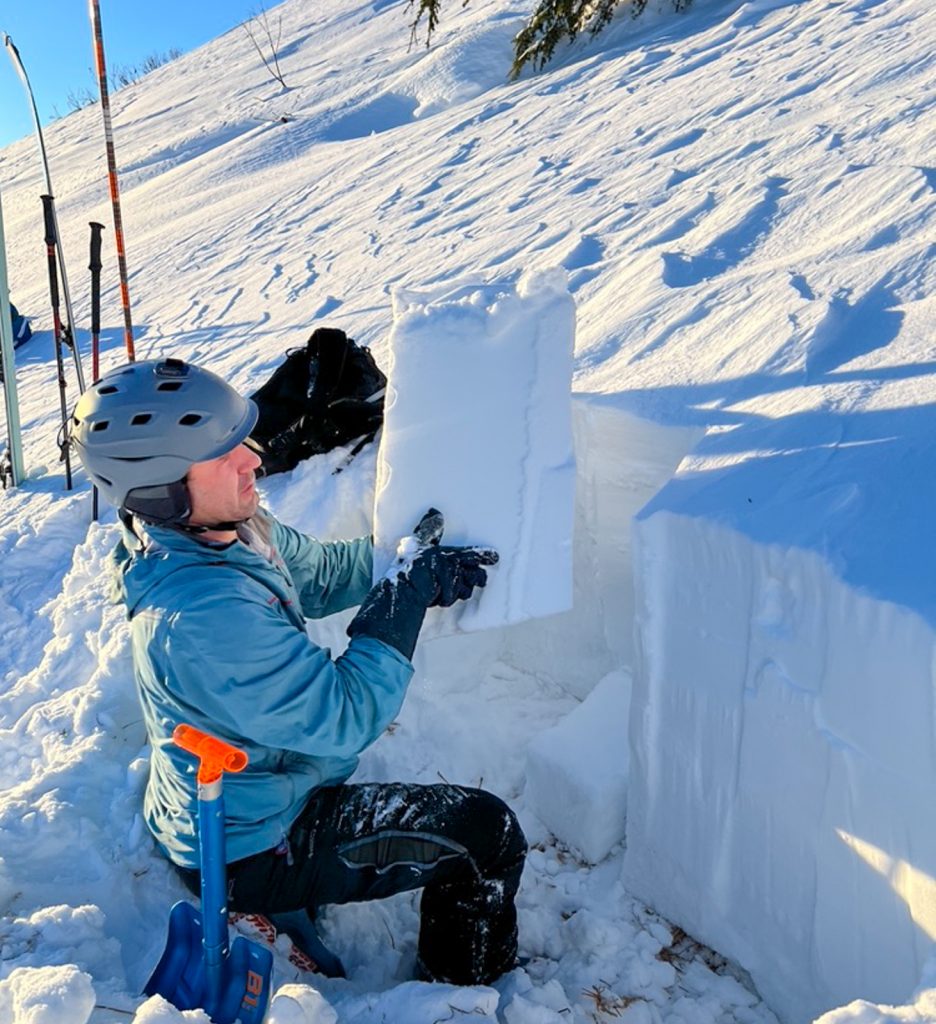 the column from our CT came off easily 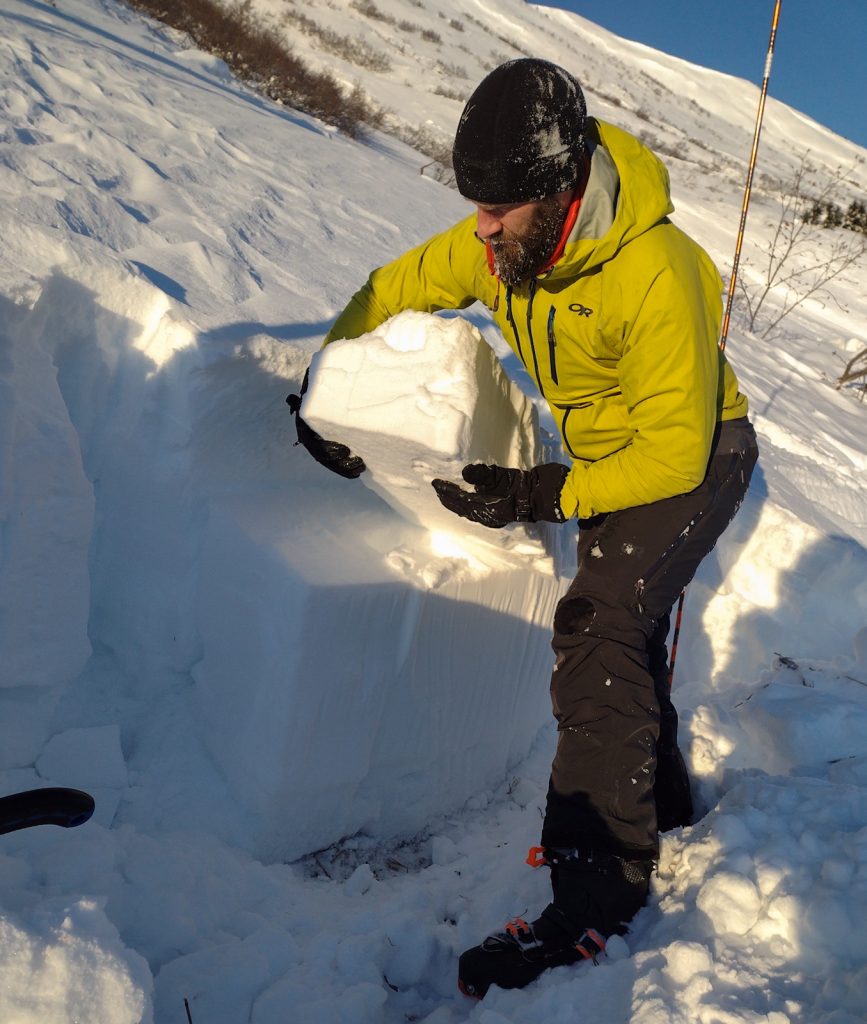 so did the column from our ETC 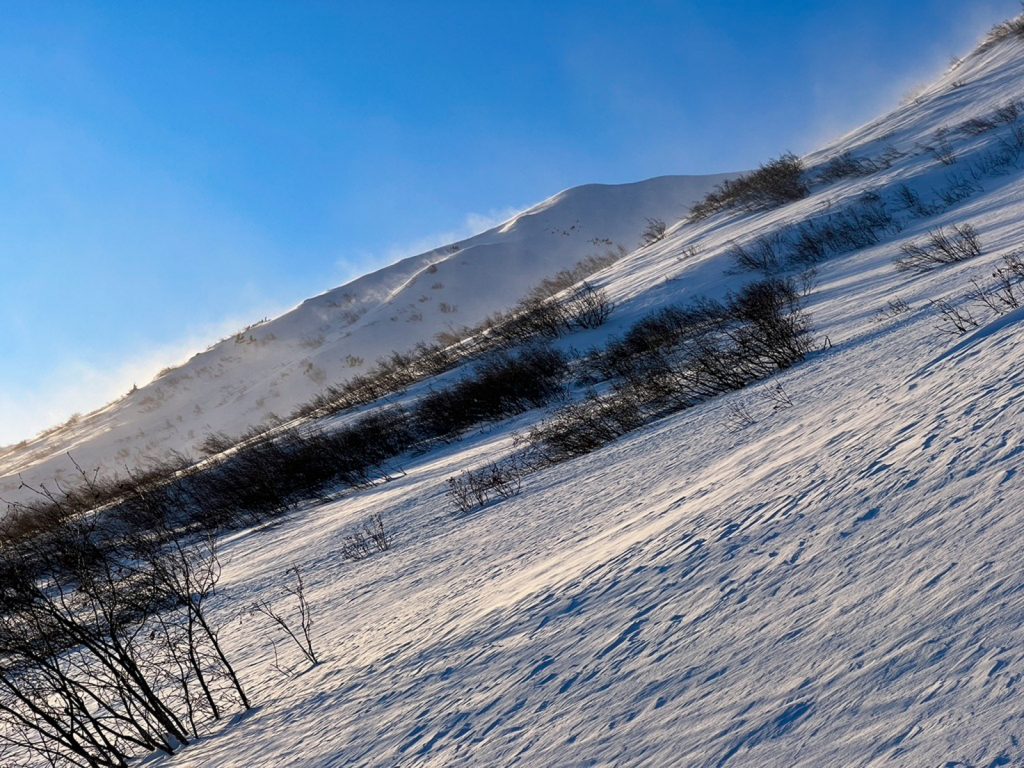 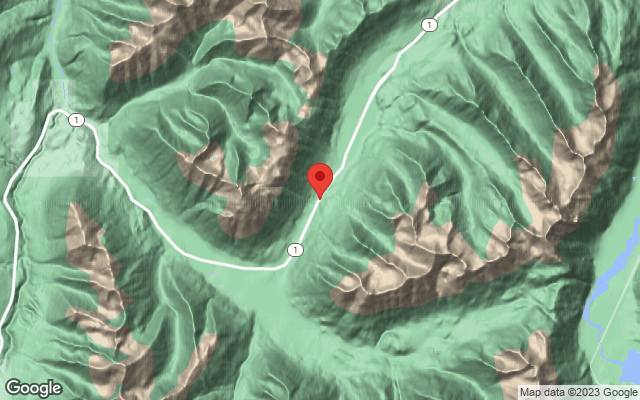