Tour up to the higher elevations on Sunburst Ridge to take a look at the snowpack after a week of stormy weather.

Active wind loading was very prevalent at the higher elevations and loading SW facing slopes along Sunburst ridge. Although not continuous, there were several gusts creating large plumes off ridgelines. The wind loaded snow was moist enough that it was stickier than expected and we did not encounter any reactive wind slabs, however a small natural cornice fall was witnessed (see photo).

Moderate NE winds with strong gusts along Sunburst and Magnum ridgelines.
Light snow showers in the afternoon with no accumulation. Light rainfall below 1,000' on drive home around 4pm.
Temperatures near 40F at 1,000'.

Moist and soft new snow covers the surface at 2,000' and gets drier with altitude. At our hight point, 3,500', the snow is still a hair moist but mostly dry (excellent skiing conditions).
There is very little snow below 1,500' and we had to hike up to this elevation before using skis.

2,000': The pack is around 2.5 feet thick and very moist to wet. All crusts in the mid to bottom of pack are soft due to melting from being rained upon last week.

3,000': The snowpack varies from 2' to 6' thick due to significant wind effect. Pack is moist with crusts in the bottom foot. One snow pit was dug with no weakness found (stable).

3,500': Snowpack varies from 3' to 6' thick also due to high wind effect. Two pits dug in a shallow spot (115-145cm total depth) with only one stability test showing a weak layer mid-pack. This was 1.5 feet below the surface and was a layer of stellar dendrites (new snow) that had not yet bonded to the older snow surface. Test results- ECTP 29, 3x ECTX. The layer is likely from around 12/10 or so. The Veteran's Day facets were found at the base of the pack over an old Oct crust - these did not snow signs of being reactive, yet were not easy to test.

*Wind effect from the past 10 days was very evident. The snow has been scoured to the ground in areas with drifts over 10 feet deep nearby. Wind features that are a bit uncommon were seen as well. Yet in general, we found a stabilizing snowpack in areas without active wind loading. 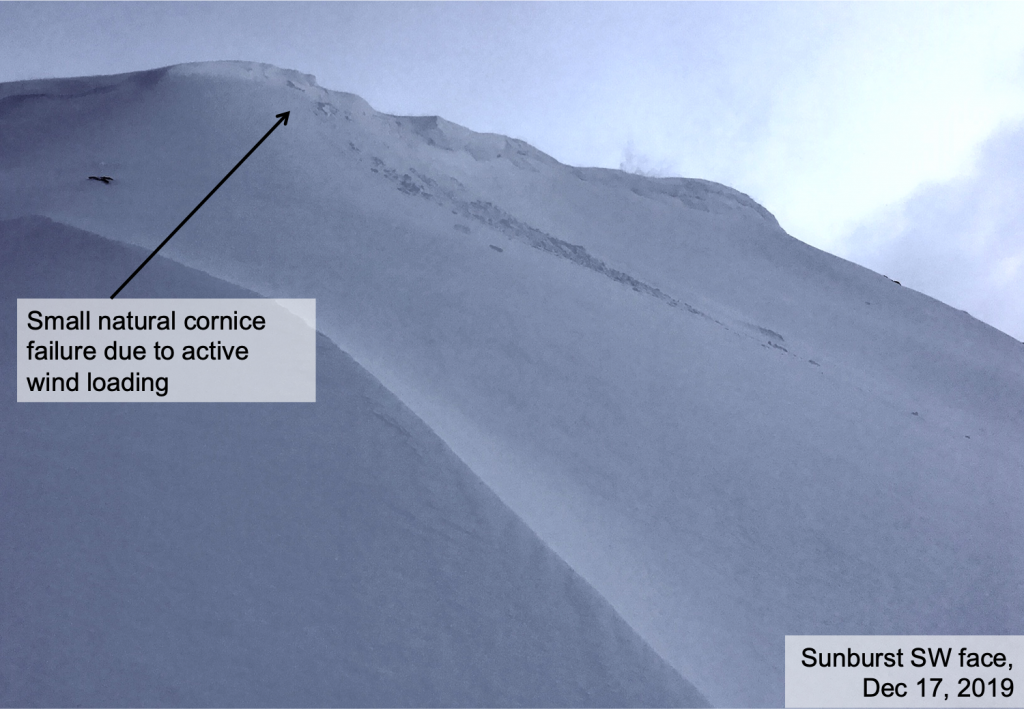 Natural cornice fall along Sunburst's SW face - relatively small - but you can see the much larger cornices further along the ridge! 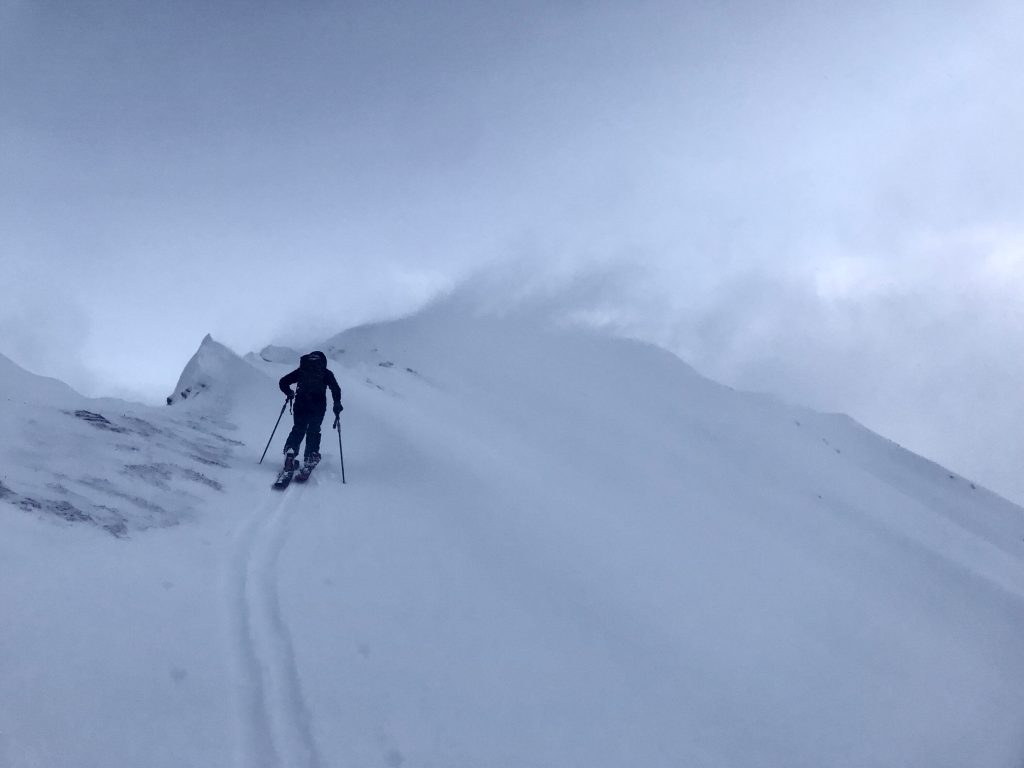 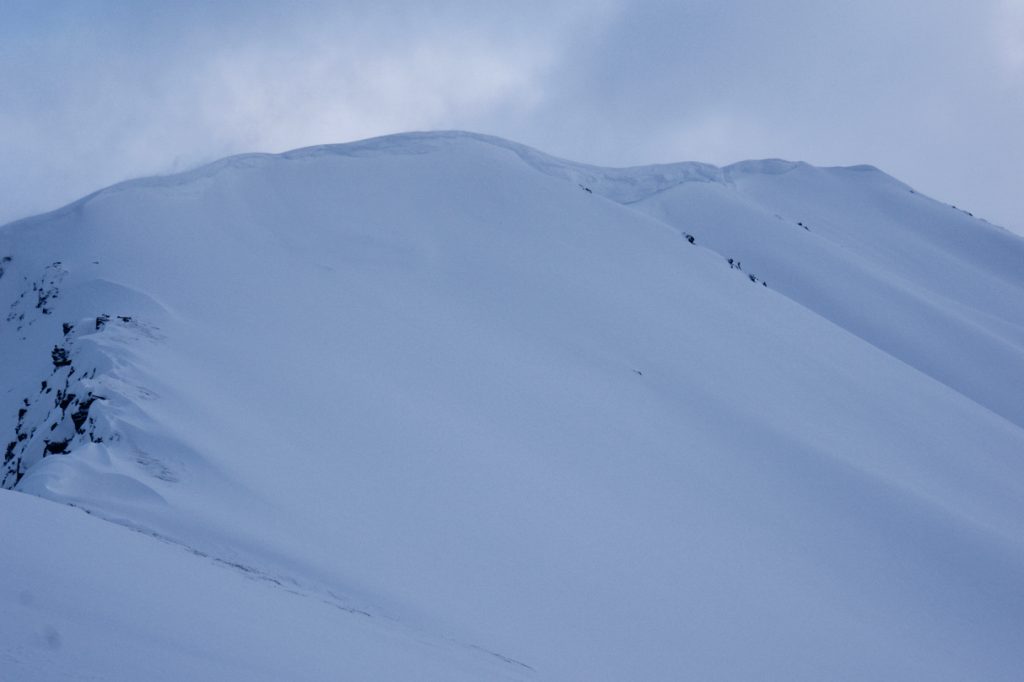 A look at the cornice line and wind slab development along the upper portions of Sunburst. 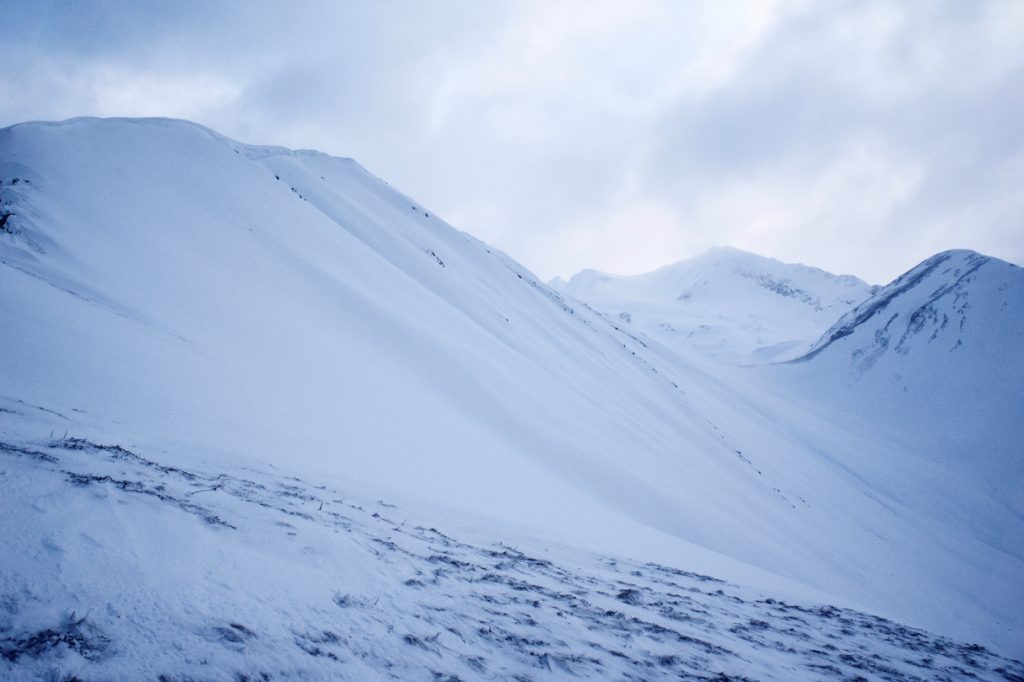 Pastoral Peak in the distance 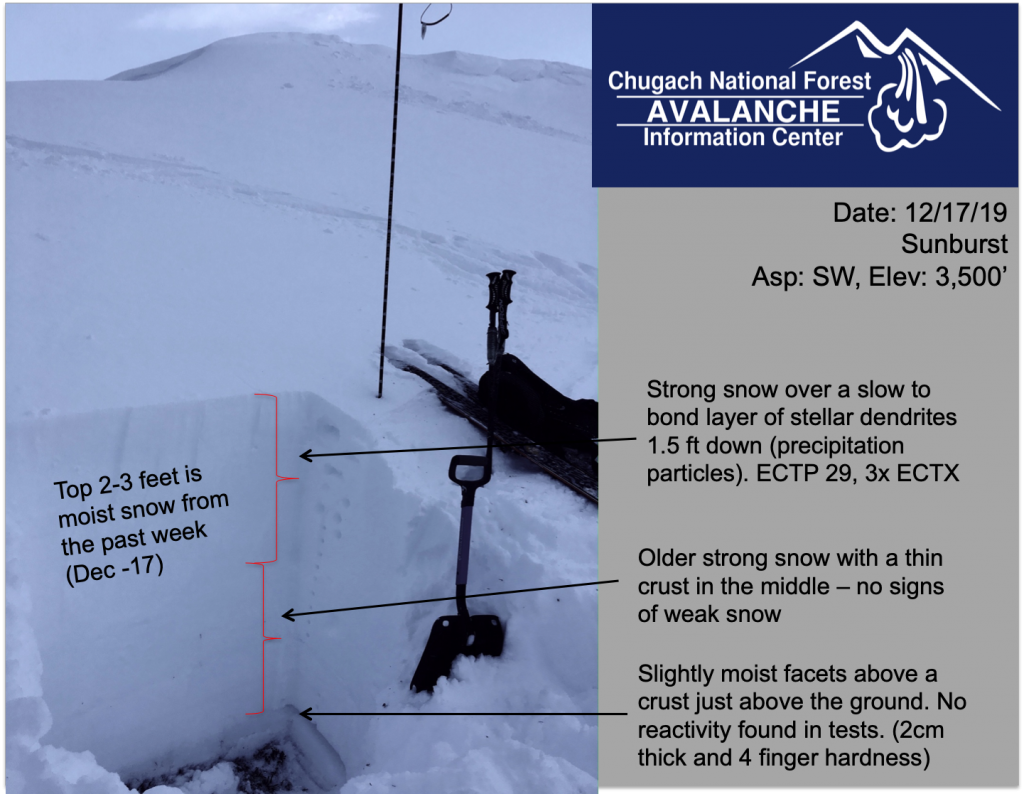 Snowpit at 3,500' in a shallow zone. There were two layers of interest (storm snow interface that is slow to bond and the facets that sit near the ground.) 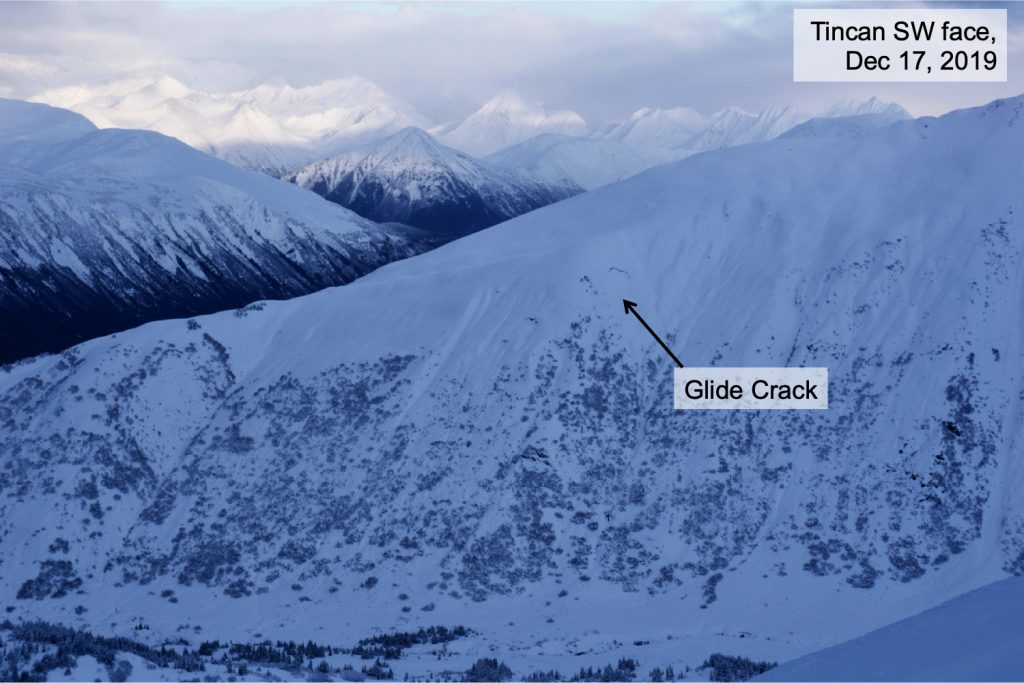 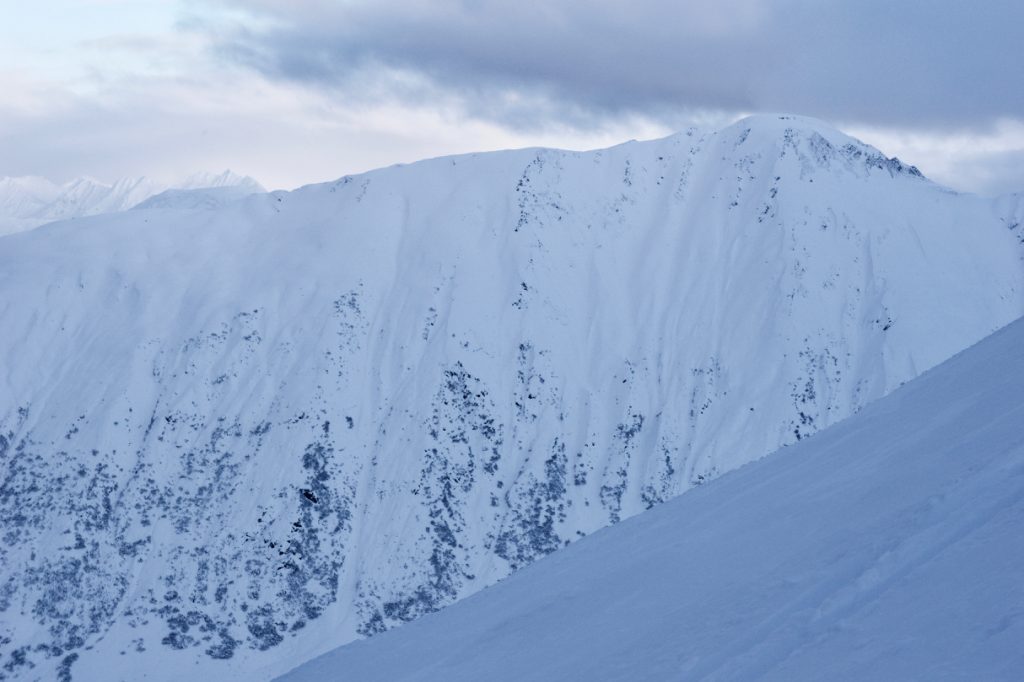 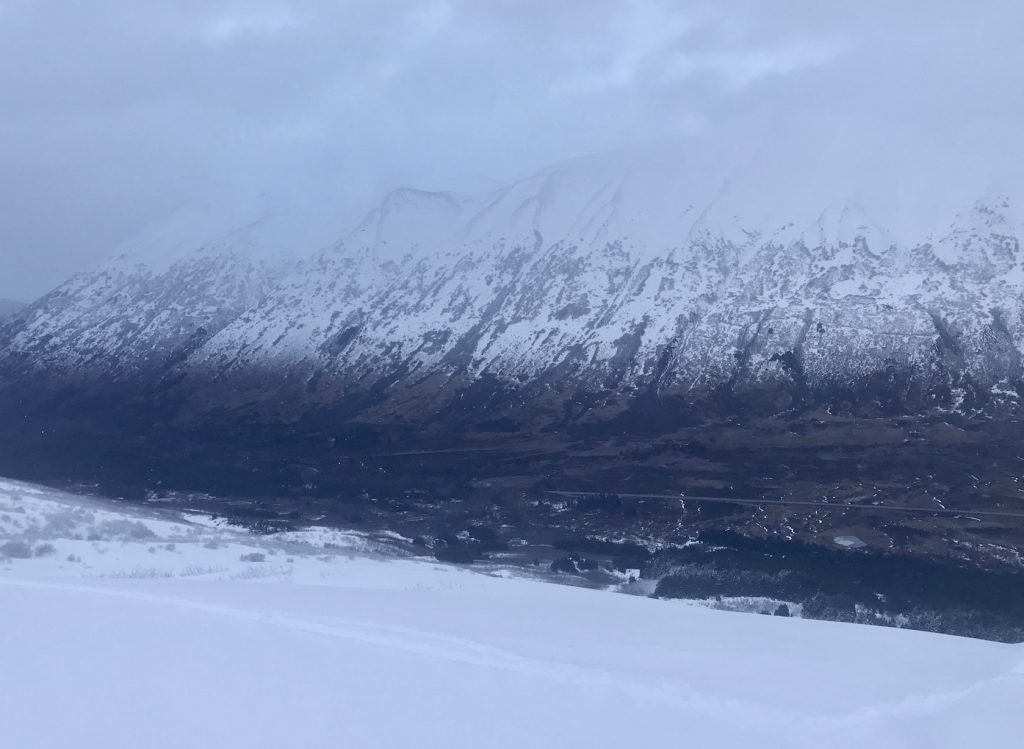 Little snow below 1,500' - photo looking across the Seward Highway to Seattle Ridge. 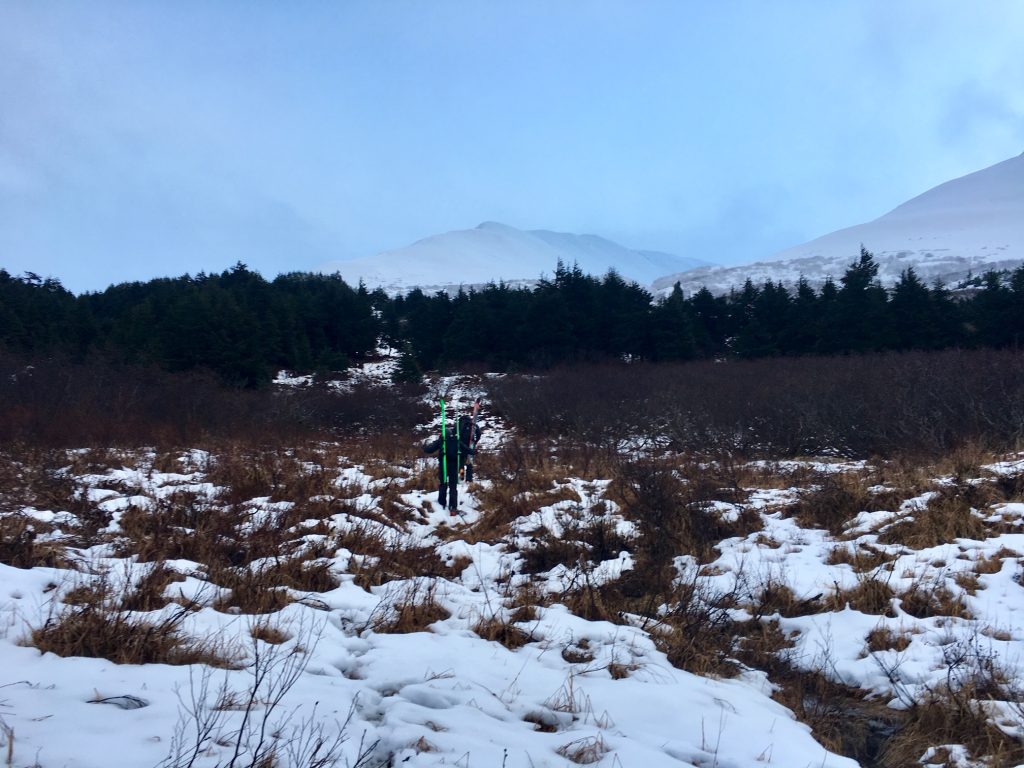 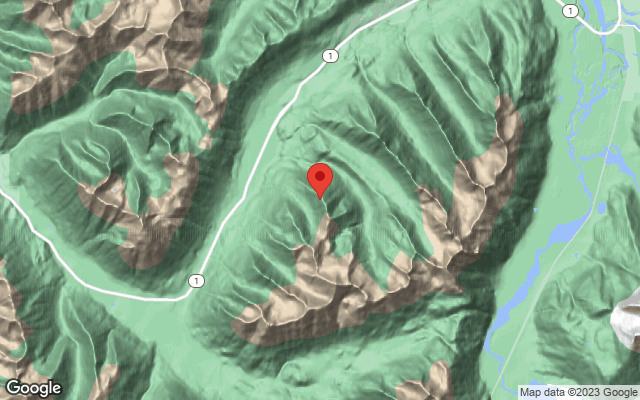