Ascended/descended Sunburst to 3100′ on W shoulder. As we were ascending we spoke to a group who experienced a very large/loud collapse at 2300′ on a SW aspect next to their pit where they had found a reactive suncrust/facet layer 60cm below the surface. We did not experience any collapsing, but did find reactive buried surface hoar in two (W and N aspects) out of three pit locations. There was a supportable melt/freeze crust all the way to 2000′, before the surface crust became thinner and covered with heavy surface snow. On steep (and direct) South aspects this m/f crust gone completely wet and saturated by 5:30pm. Just before 5:30pm we noticed a fresh crown on a SW aspect in Seattle Creek. We could only see the very top of it, but photos and web cam pics taken earlier confirmed it was new today. We found out later (second hand) it was triggered by a snowmachine, but details are still vague. We also received reports of a few more human triggered avalanches in Seattle Cr. There was also a large natural avalanche in Portage Valley today. More info/pics can be found HERE. It is also suspected that Pete’s South avalanche happened sometime just before 6pm today. Photo below.

Several large human triggered avalanches in Seattle Creek
Large collapse (reported to have been 200' in diameter on a SW aspect of Sunburst at 2300')
Large natural avalanches in Portage Valley on South facing slopes
Natural avalanche on South face of Pete's (not sure when it released, but sometime after 1pm on Friday)
Sun triggered wet loose and roller balls on Solar aspects and temperatures in the 40F's

Clear and sunny, daily temperatures swings from 26F to 44F near road level. Sunburst wx station recored temps above 32F from 1-5pm, with a high of 38F. Winds were calm to light from the East. No new precip.

-Stout and supportable m/f crust to 2000' in the morning, but on steep South aspects this crust completely melted and was wet and saturated. On shaded aspects there about 1cm of dry snow on the surface.
-At 2000' the m/f crust starts to become thinner, ~4 inches' where you can punch your boot through.
-As you gain altitude there is dense heavy snow on the surface with a 1-2" sun created melt/freeze on Solar aspect. This was wet by 1pm yesterday.

Below the stout crust in the lower elevations the snow is still very moist.

In the upper elevations there is a wet snow layer that was still moist under 4-6" of heavy newish snow from the end of the storm. This wet layer is from April 5th, the warmest day of the storm, where rain fell to at least 3100'. Our highest point yesterday.

*We dug three pits and found a reactive layer of buried surface hoar (buried March 27th) in two out of three pits.

*Pit 1 - NW aspect, 2400', 29*slope, HS=175cm, a thinner area where the snowpack is more scoured, this layer was only 16" below the surface. It propagated with Easy force in Extended Column tests (ECTP11 x2) and failed all the way to End in Propagation Saw test. (PST 40/100 End.) The March facets (4F hard and rounding) were also found 20" below the surface and did not fail in ECT's. The rain layer from April 5th was 5" below the surface and was 3" thick and 1F- hard and still a little moist.

*Pit 3- SSW aspect, 3100', 24* slope, HS=250cm. We did not find buried surface hoar, but did find the sun crust that was buried on March 27th. The new snow was well bonded to this layer and did not fail in any tests. There was still a very thin m/f crust from April 5th warm up 8" below the surface, and it was only 1cm thick and pretty light an breakable. 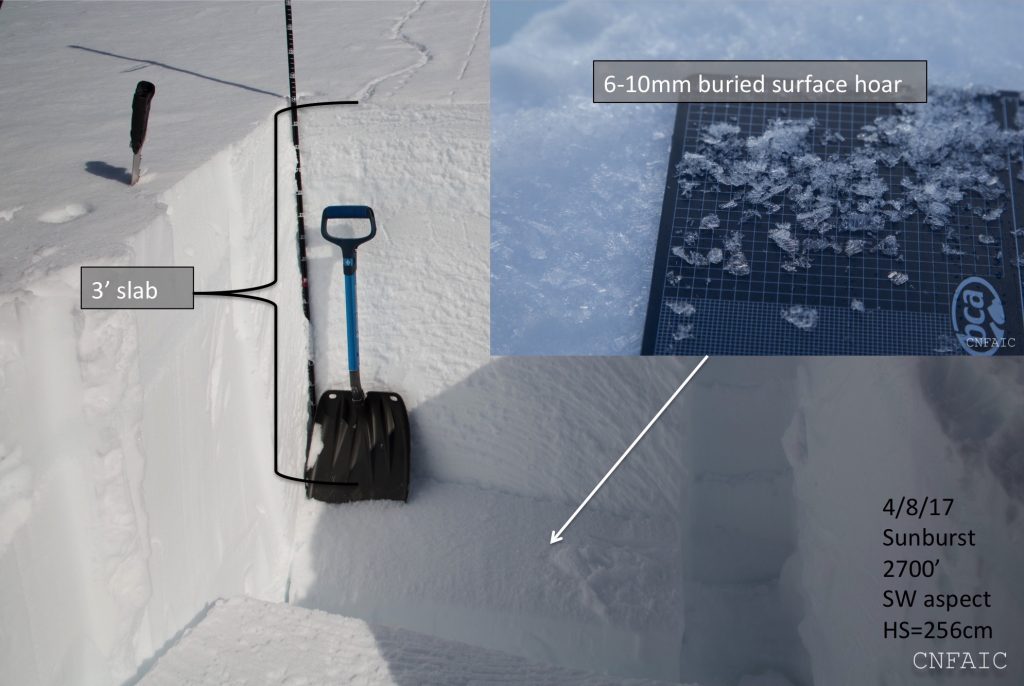 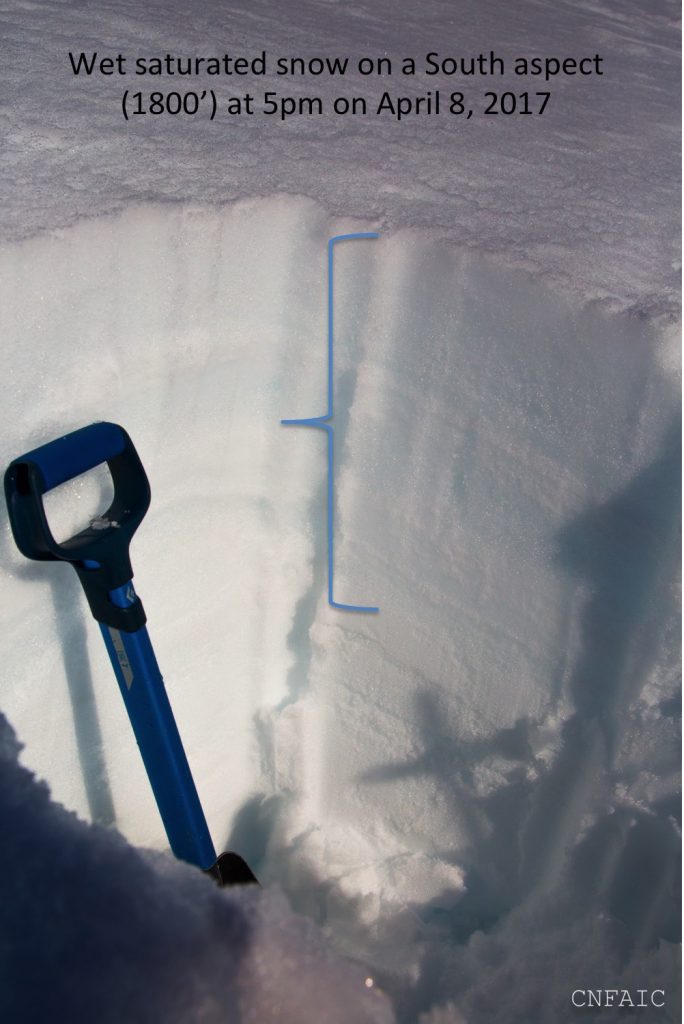 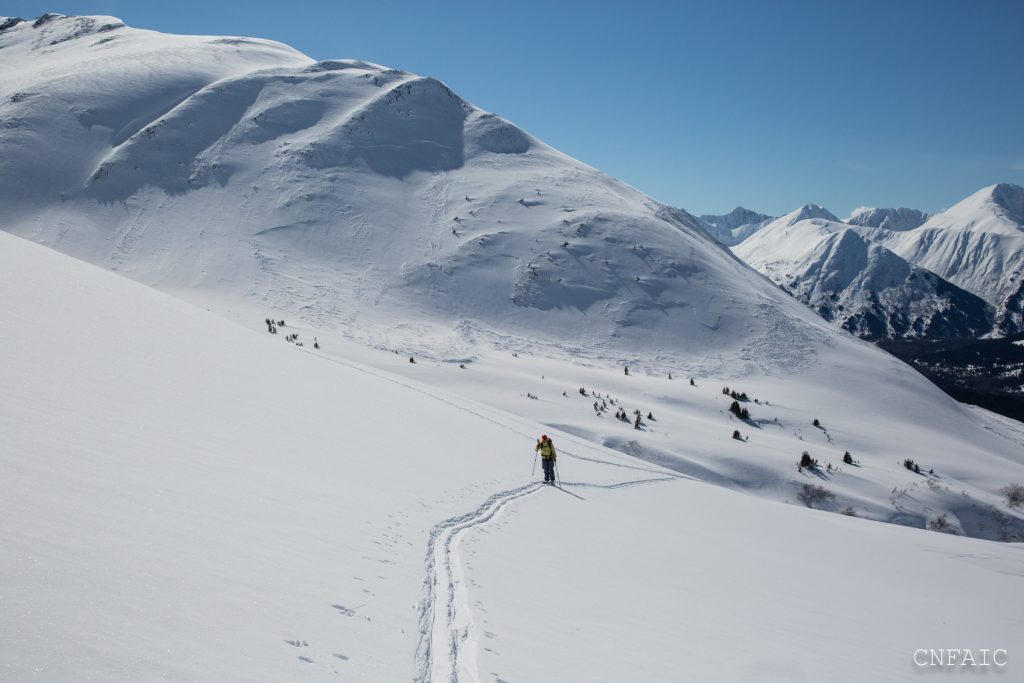 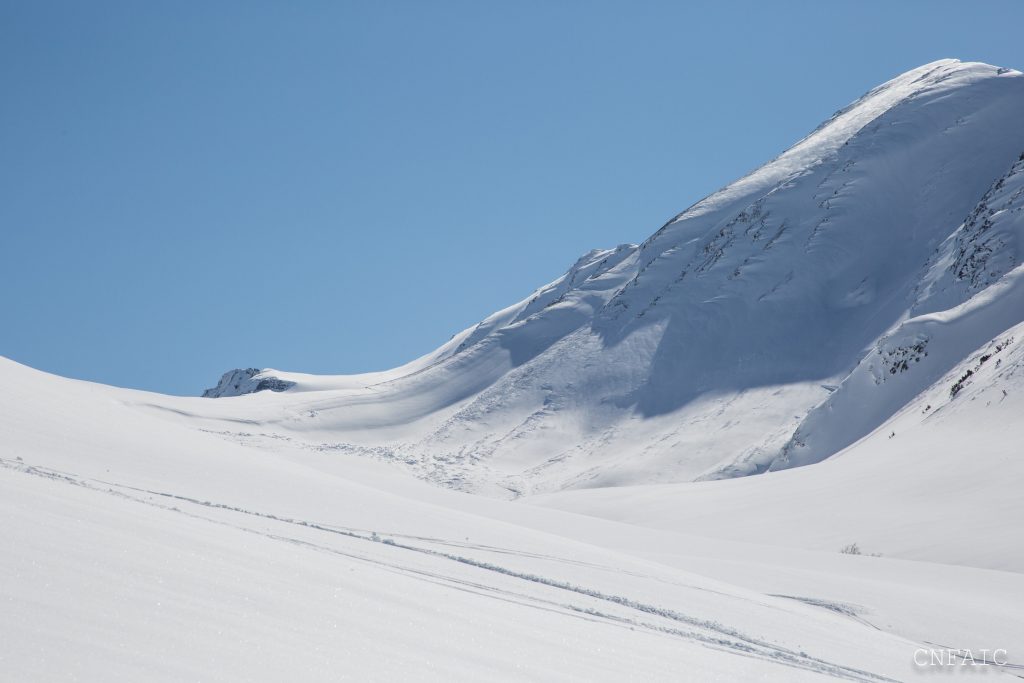 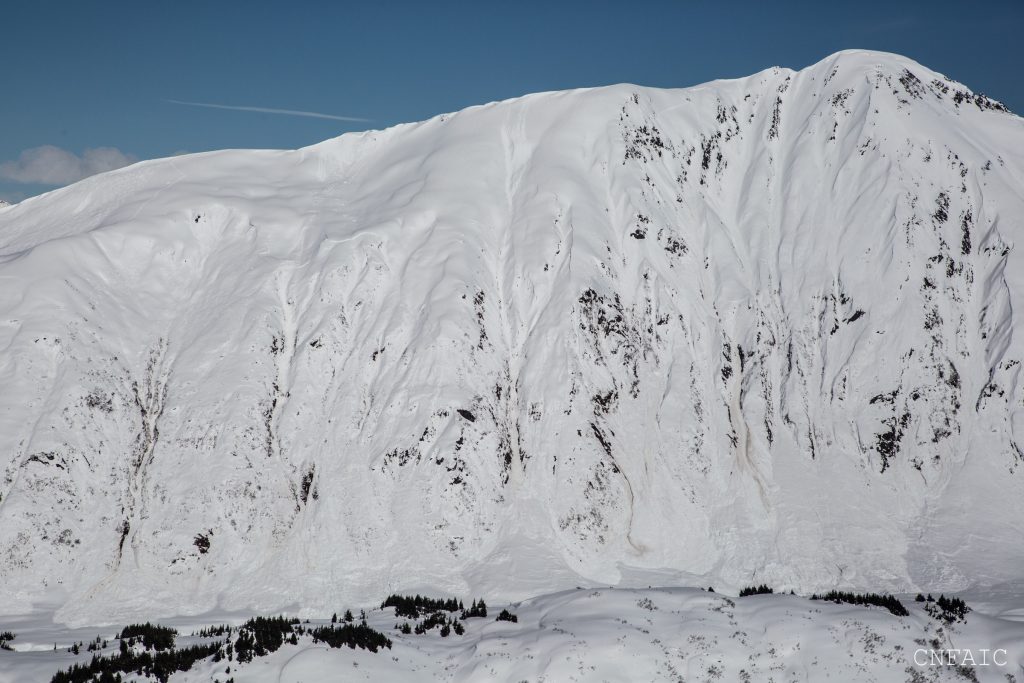 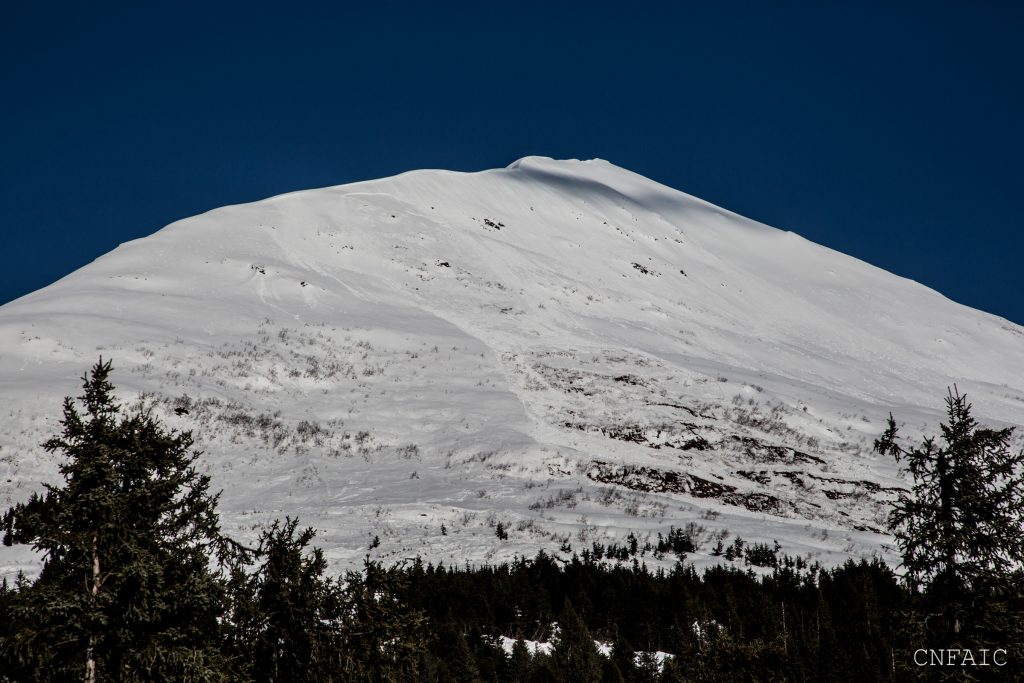 Natural on Pete's South released sometime between 5:45-6pm, 4/8/17. Confirmed with an observer who didn't see it driving back from Summit Lake. Photo take around 6pm. 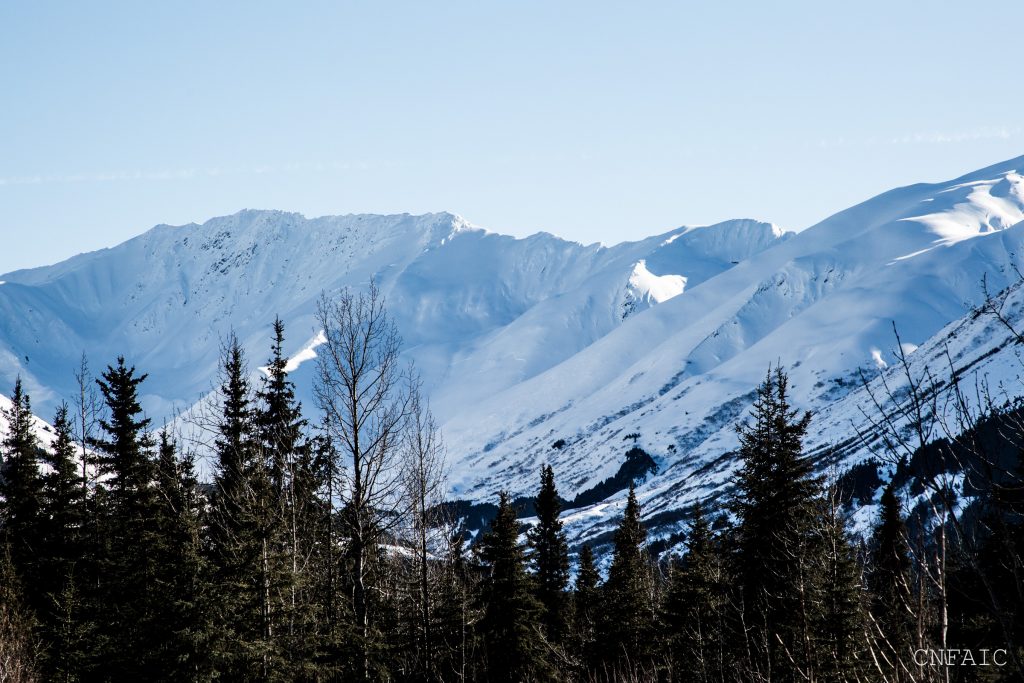 Only a few crowns could be seen in Lynx creek and lots of slopes that haven't avalanched yet. 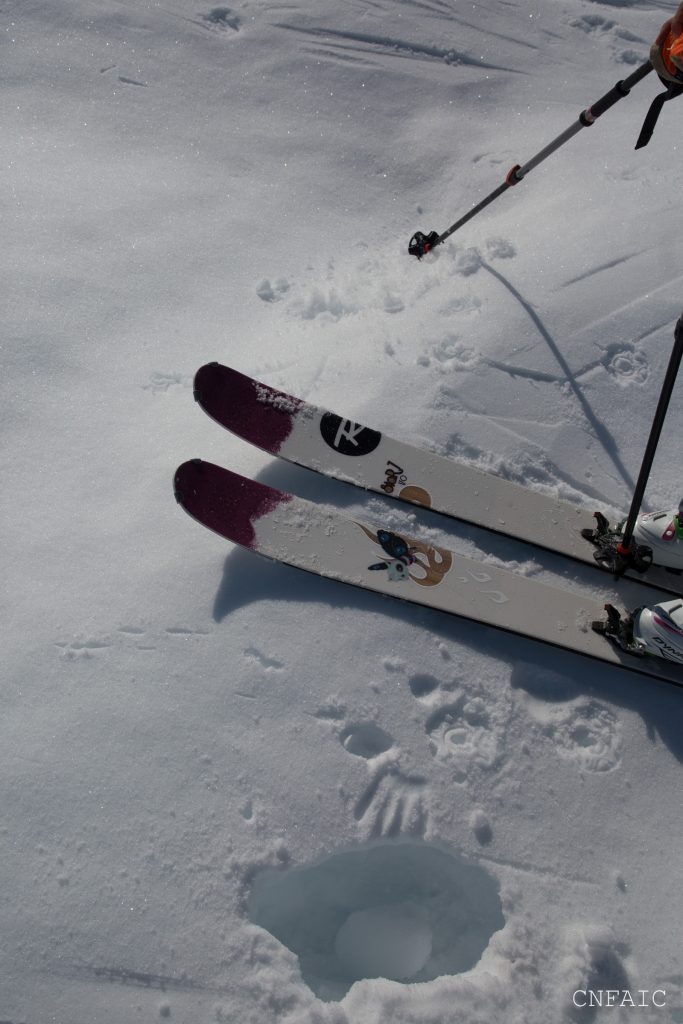 The difference between a flat aspect and a steeper southerly slope at 1700' around 1pm, only the top 2" was moist compared to completely saturated by 5:30pm at this same elevation. On the shaded flat part I had to stomp my boot really hard to push through, otherwise was fully supportable. 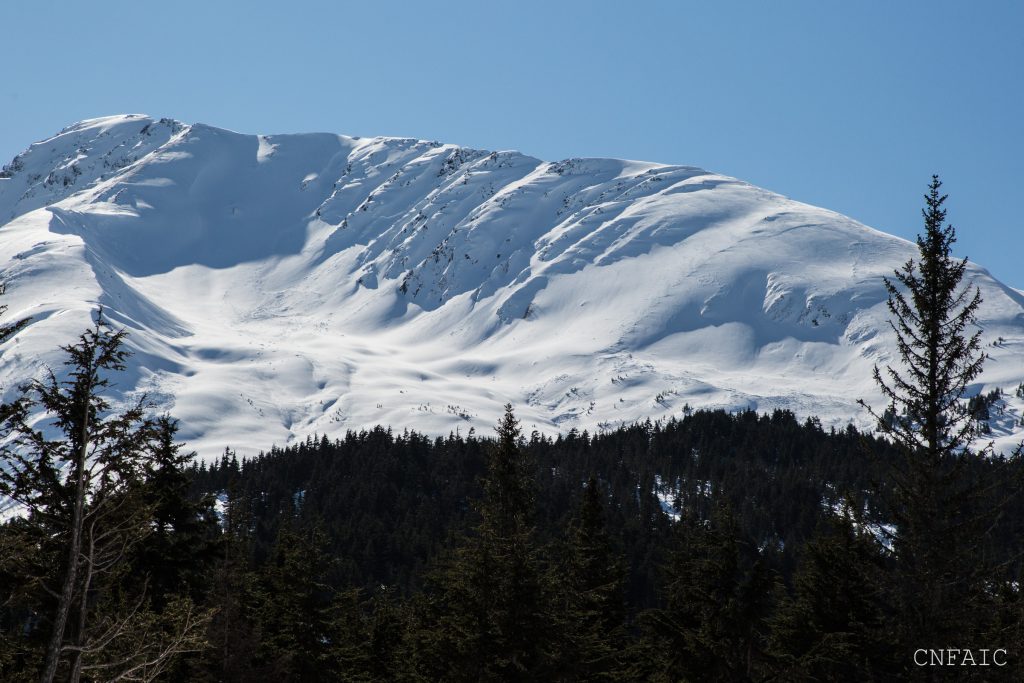 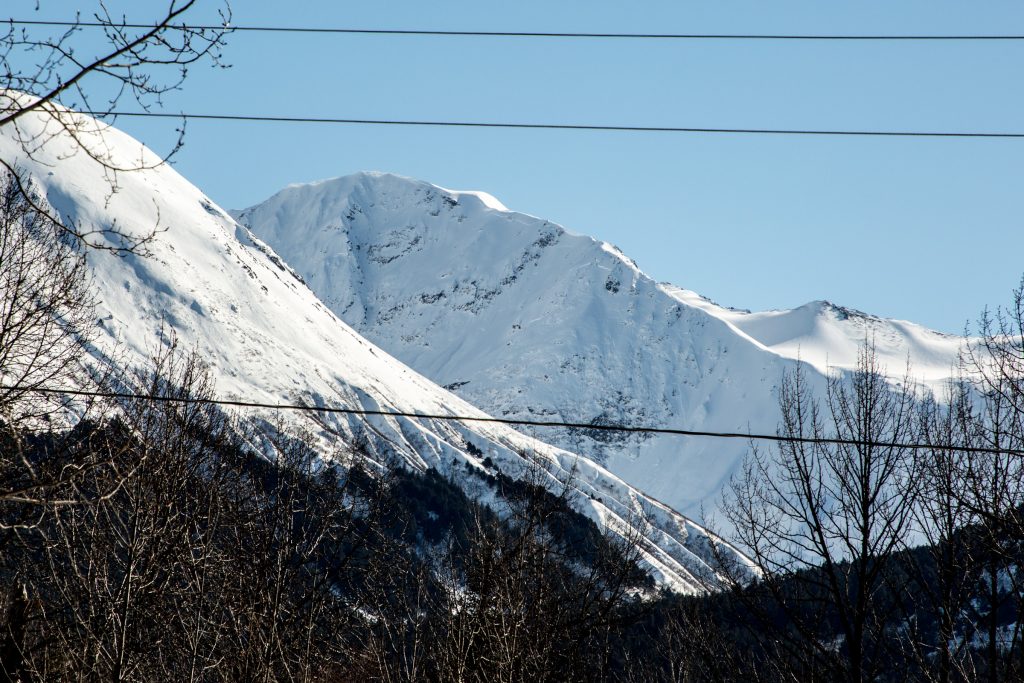 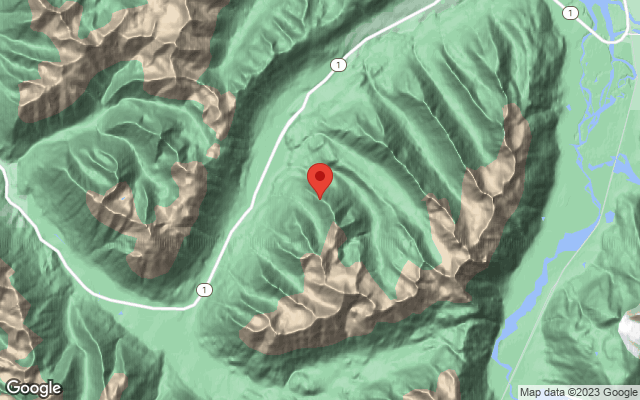