Sunburst to the weather station, via Taylor Pass

At least one new glide avalanche from the past 24 hours on Seattle Ridge, just south of the large glide over the repeat offender path/uptrack. This glide stepped down, wider than the one previously reported - see photos below. We also suspected a new release on a SW aspect of 4940', and the sun was still heating things up when we left around 4 PM.

On top of the Seattle Ridge glide/stepdown avalanche from the past 24 hours, recent glide/wet loose activity below Tincan Proper/Library. While there are lots of cracks along the library, there have been fewer glide avalanches on the library compared to below Tincan Proper. A dirty debris pile also ran on a SE aspect on the far end of the Library, onto the Kickstep pocket glacier.

A fairly large debris pile was below a steep SW aspect, under a corniced ridge roughly between Kickstep and Pastoral. Hard to say what avalanche problem produced this debris from our view!

Finally, two wet loose slides that appeared to have occurred since Friday ran from near ridgeline on a SW aspect of sunburst (pictured below).

The sun was working the surface today...

In the AM, supportable crust with a dusting of new recent snow on all aspects to the road, with ski pen between 0 - 1".

1000 - 1500' @ 4 PM: Small steep southerly rollovers were going isothermal below 1500', while shaded northerly features at this lower elevation were still dry and stout.

1500 - 2500' @ 4 PM: Lower angle SW aspects had a little softening from the sun, but low angle West aspects were still quite stout and crunchy.

2500 - 3800' @ 4 PM: By staying on a steep, south aspect feature, we found 1-2" of moist to wet small melt freeze grains, capped by a dusting of new snow, sitting on a thick supportable layer. Towards the bottom of the run on a ~35 degree SW aspect, the sun hadn't soften the surface as much as above. 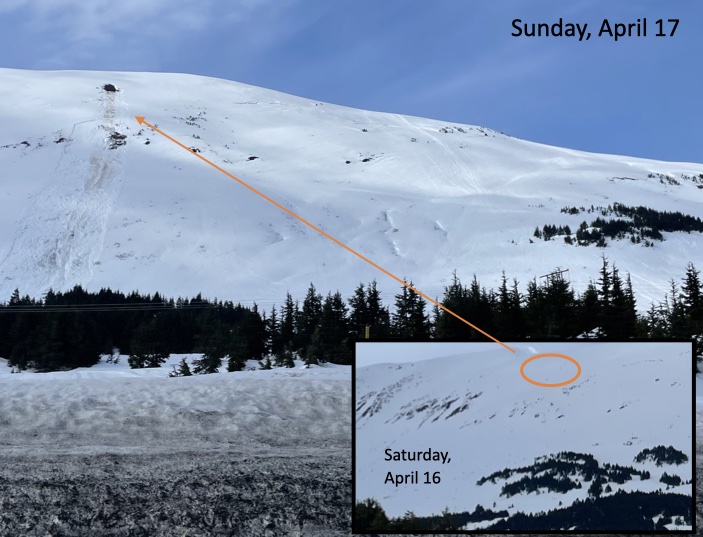 This glide avalanche - just south of the repeat offender glide crack and uptrack - happened in the past 24 hours, stepping down. 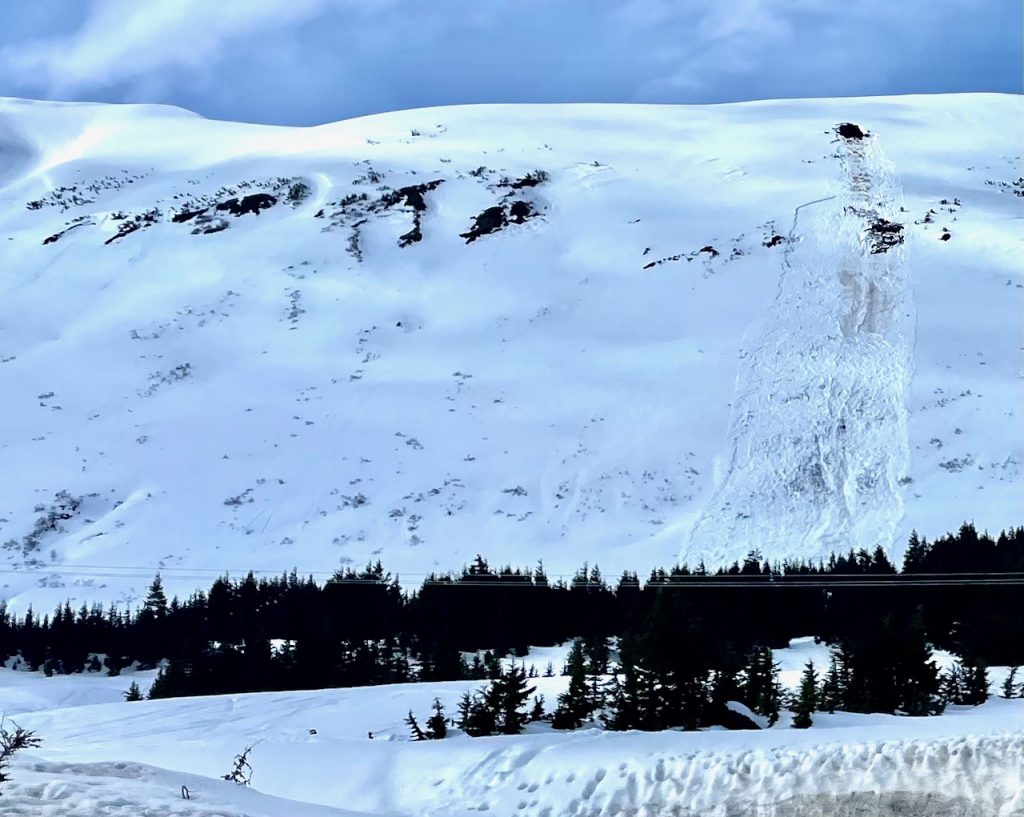 Another view of the avalanche above. 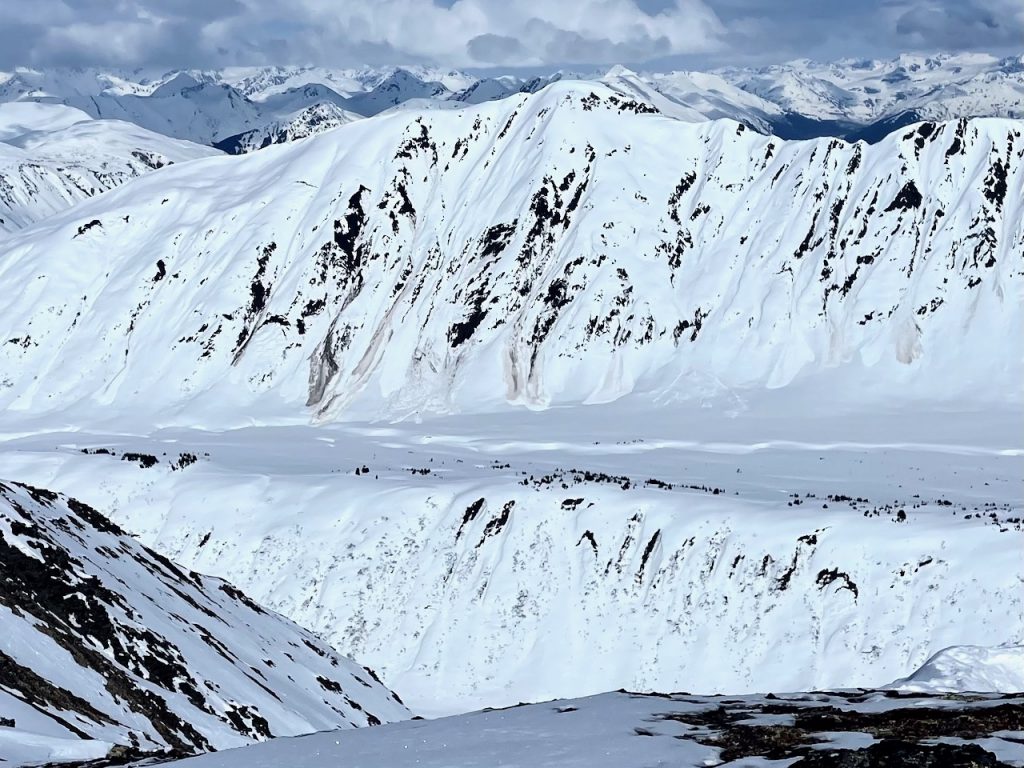 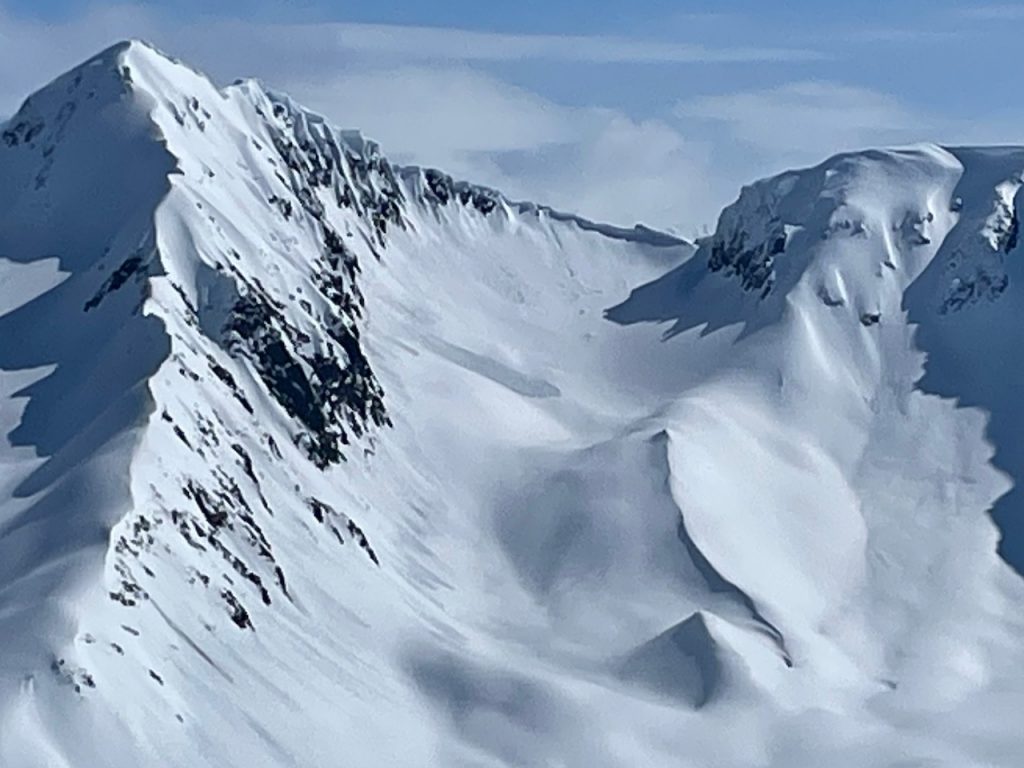 Debris referenced above below a SW ridgeline, on a feature/peak between Kickstep and Pastoral. 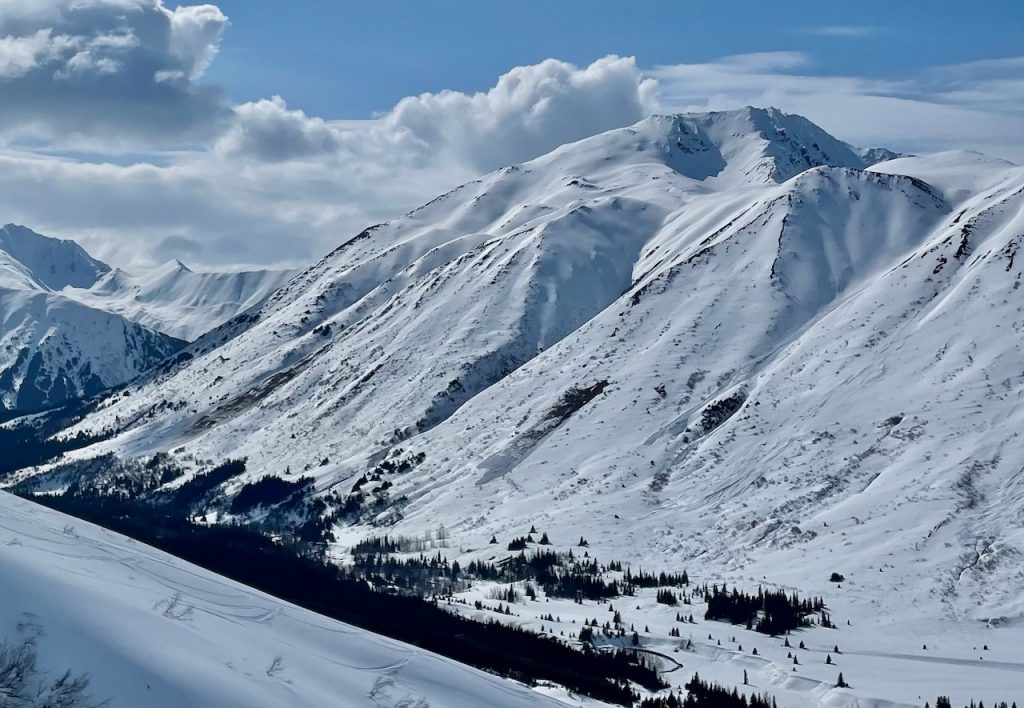 Recent glides below 4940' on the far south end of Seattle Ridge. We think the debris on lookers left - the smaller piles - may have been new today, but we aren't positive. 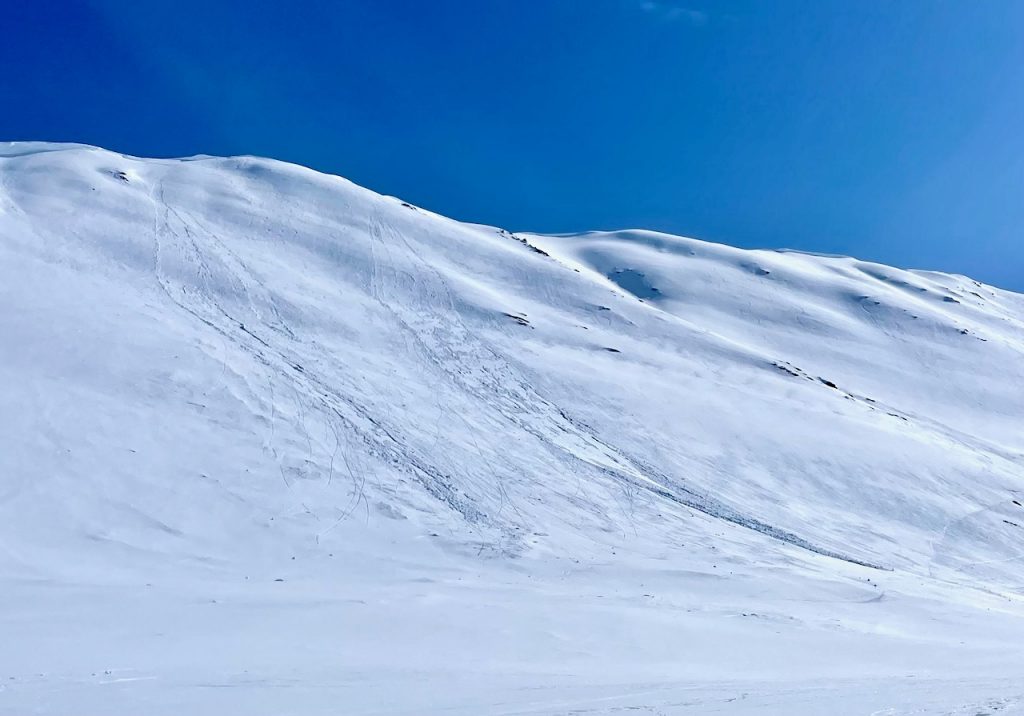 Recent wet loose slides on a SW aspect of Sunburst 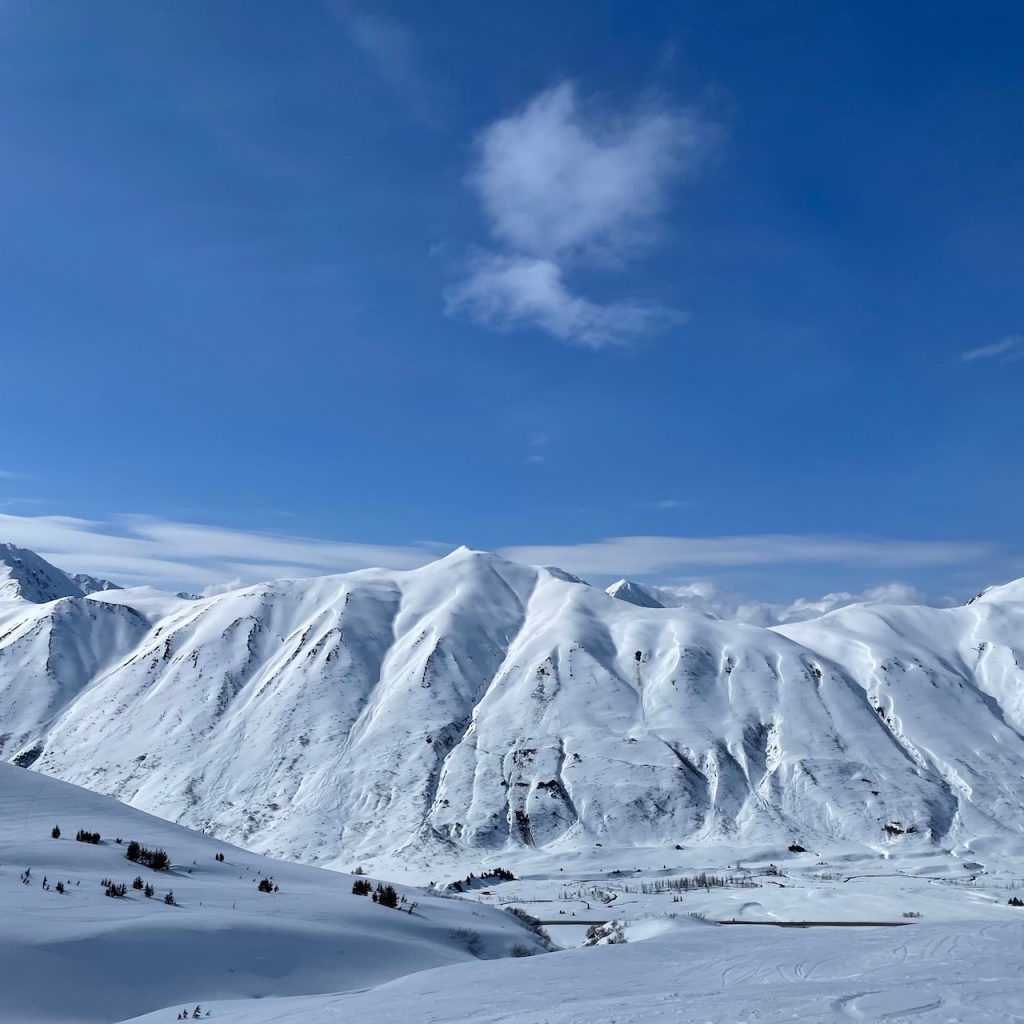 Sky conditions for much of the day... blue with the occasional puffy cloud. 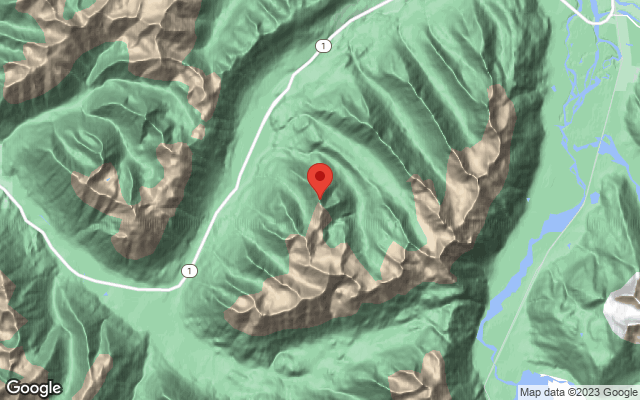