Sunburst to 3100′ via standard uptrack

Some small avalanche activity in the region from the past few days, including:
- North aspect steep slopes of Cornbiscuit had some fairly fresh debris (photo below), with start zones covered back up by snow.
- Seattle Ridge had a small debris pile under a cornice that appeared to be covered by at least some of yesterday's storm (photo below)
- Small loose snow avalanches that looked fresh - potentially today - in cross loaded features facing South on Seattle Ridge (photo below)

The glide crack on the Seattle Ridge's repeat offender path is still visible, and while our angle was different today from last week, appeared to be slightly bigger...

Finally, when the sun would light up the steep slopes at the base of the Library/Tincan Proper, it looked like widespread roller balls may have been occurring today.

We had good light and visibility on the Library, Tincan Proper, and the north aspect of Magnum, with no other apparent recent avalanche activity.

Overcast skies with obscured peaks in the AM transitioned to broken skies and lingering patches of valley fog below us by afternoon
A brief period of light snow midday, occasional light winds from the south at ridgeline
Warm. 32f at the car in the morning, up to 36f when we departed at 3:30pm with melting at the road level... below freezing at ridgeline.

2" of new snow overnight at the road level. 1-2" of this new snow was on the surface along the entire route, including the often wind affected ridgeline.

Below the soft new snow from overnight, last week's winds clearly had stiffened the surface of the entirety of the route above 2000'. Ski pole probing revealed a 4-12" wind hardened layer, often over a less dense layer of snow just below. Quick hand shear tests above 2000' would generally require medium or hard force to fail. In clearings between 1500-2000' - where winds left a thinner (2-4") slab - these hand shear tests would fail with easy force. All that said, no cracking or collapsing as we made a trail, and small corniced features would only break under foot when jumping on them. 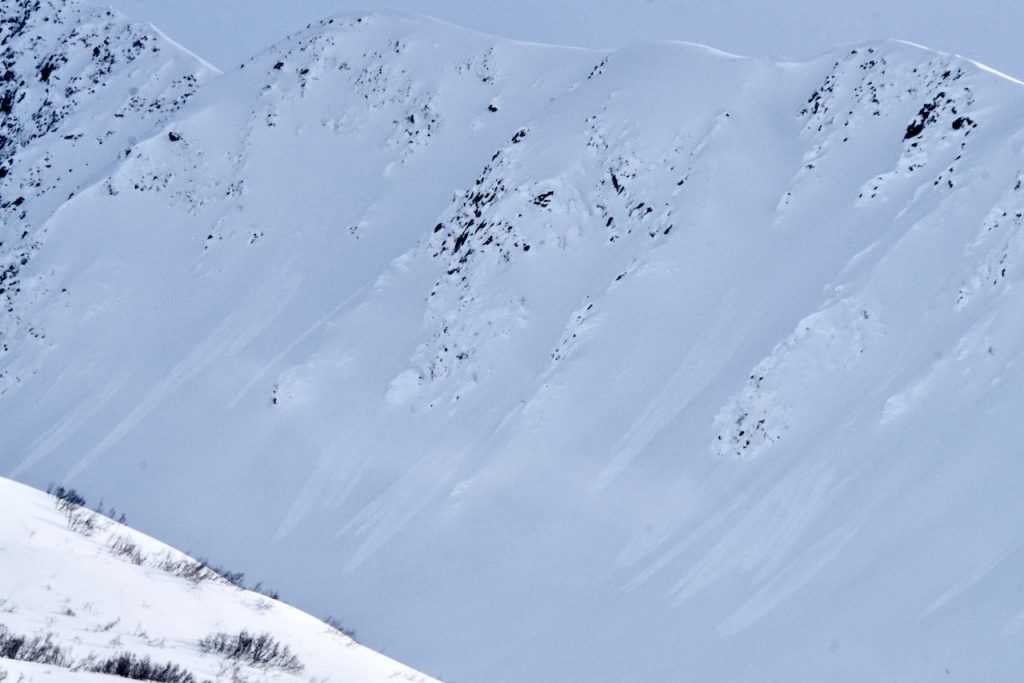 Small fairly recent avalanche activity on the steep north aspect of Cornbiscuit; the starting zones have been blown back in/covered in snow. 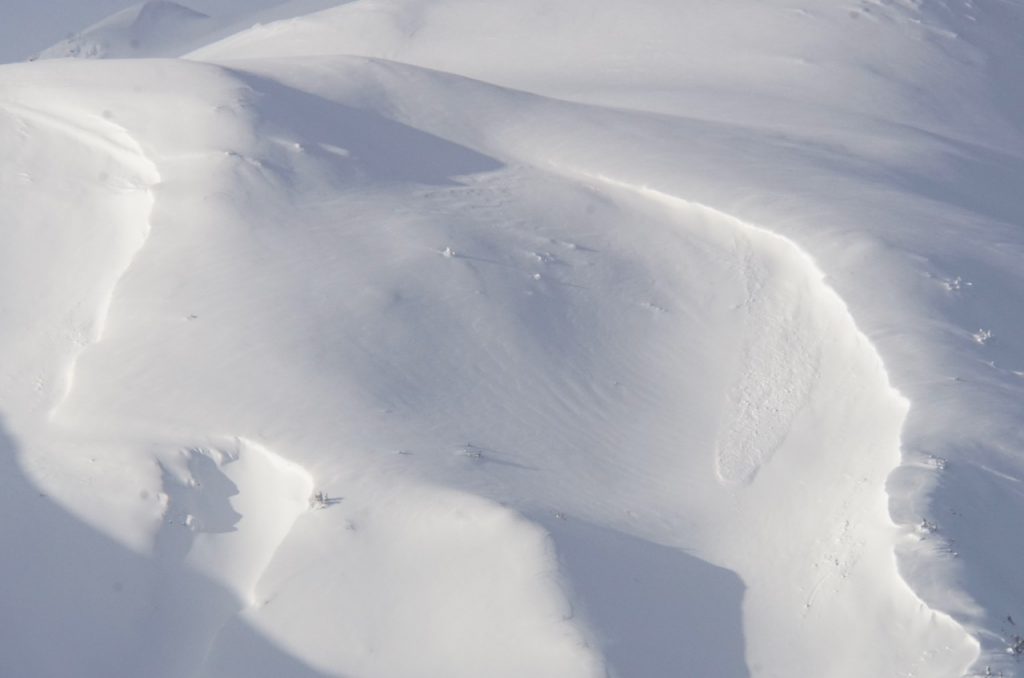 A small recent avalanche on Seattle Ridge, roughly across from Center Ridge. 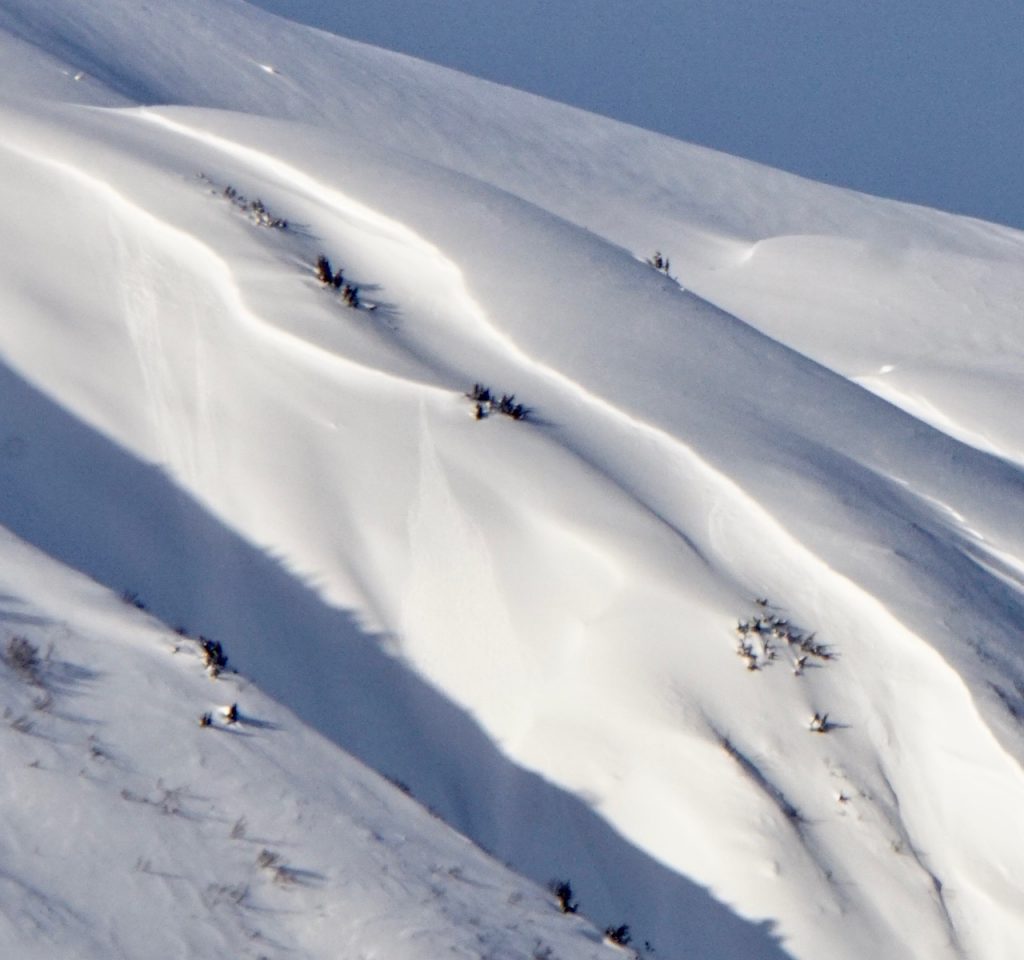 This extremely small loose activity in a cross loaded feature of Seattle Ridge looked fresh, and was likely from the past 24 hours. 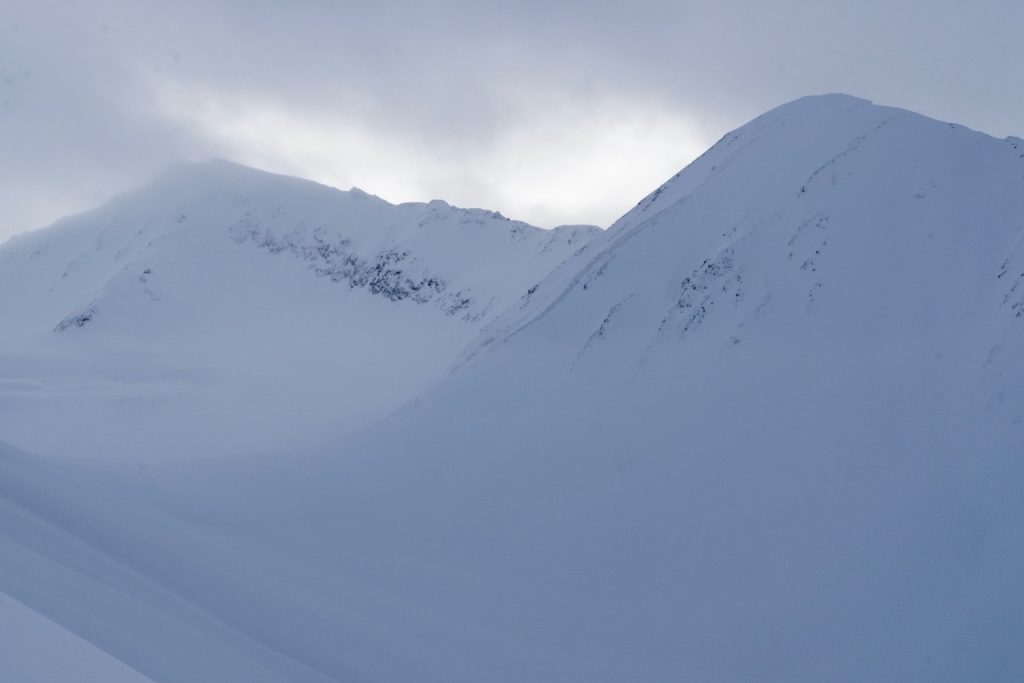 While new soft snow covered the entire route to 3100' on Sunburst, winds that accompanied last night's storm removed it on some features of Magnum and at Taylor Pass as well. 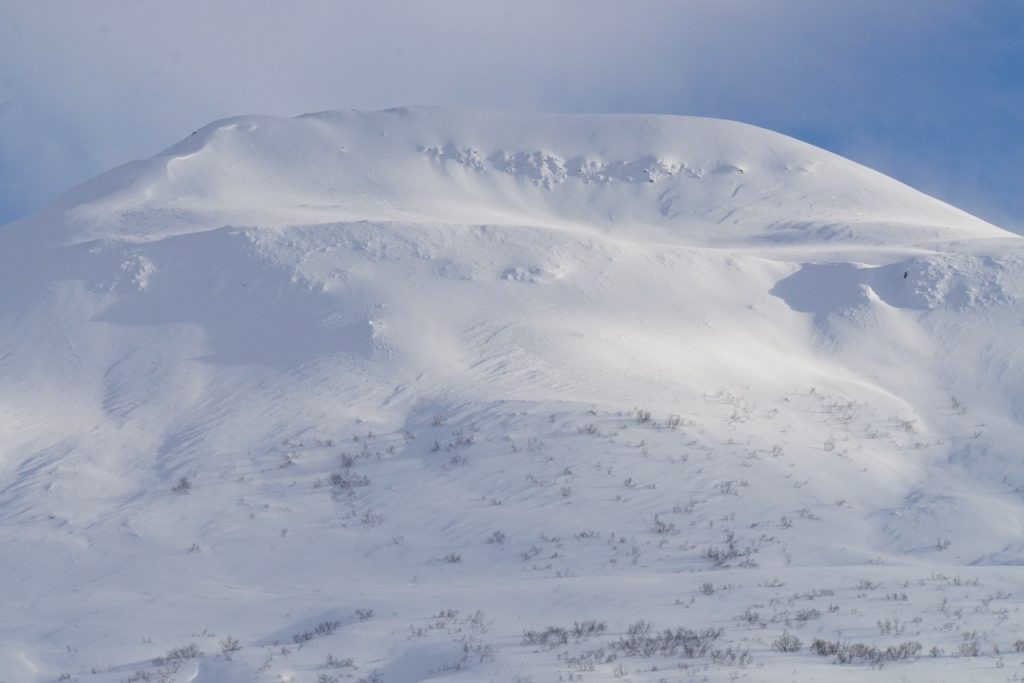 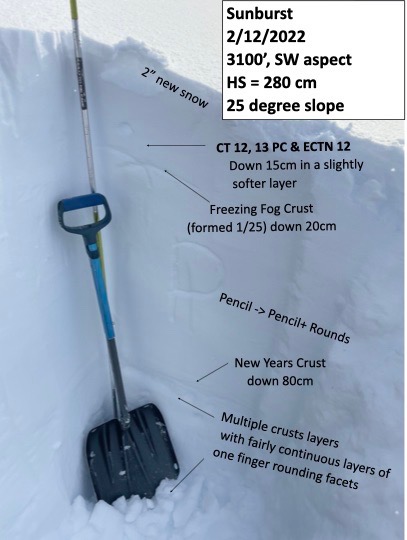 Pit results as discussed above. 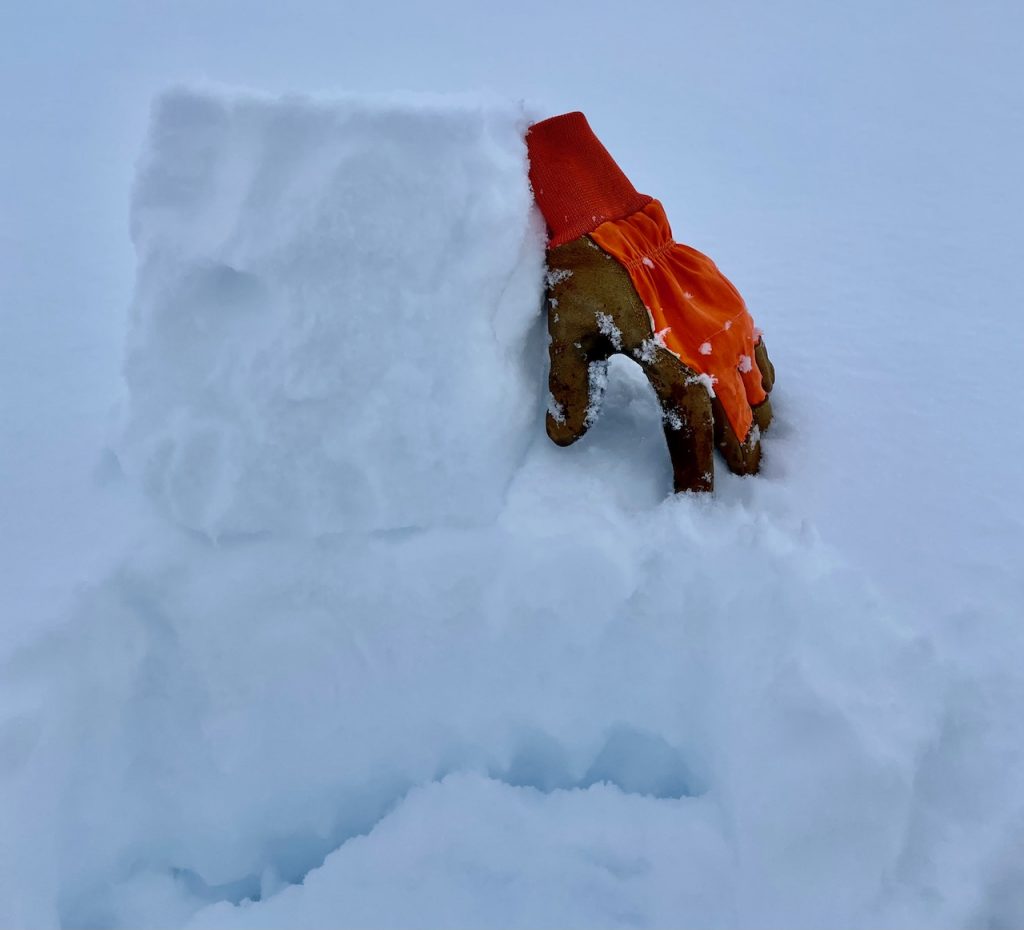 Example hand pit/shear test - one of many on our way up! 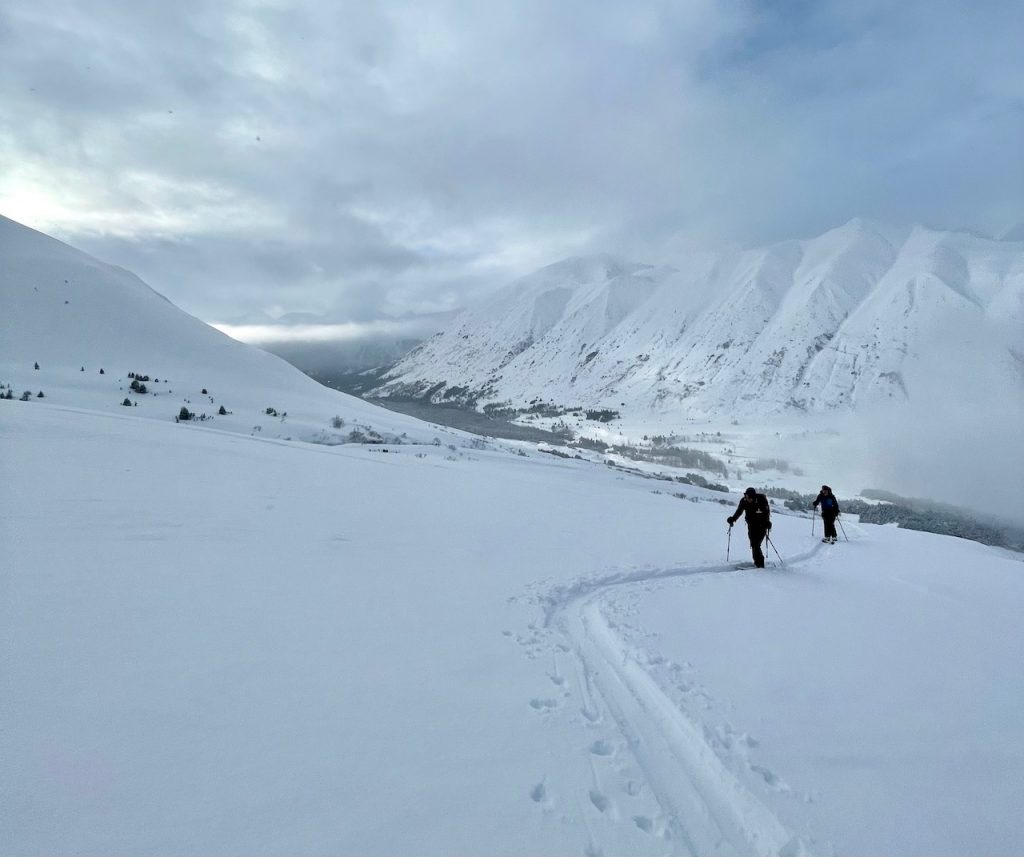 Sky and surface conditions in the AM, before the sun showed up 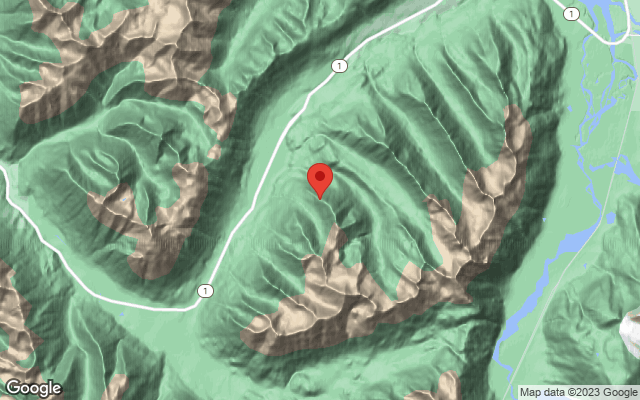